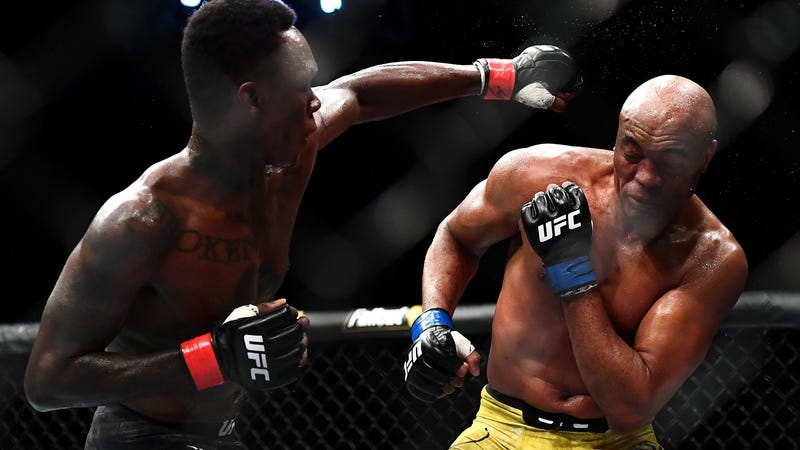 Three hours prior to the gates opening for UFC 234 on Saturday, news came out that shook up the event. The main event middleweight title fight between champion Robert Whittaker and Kelvin Gastelum was pulled off the card in Melbourne, Australia, due to an injury suffered by Whittaker.

Instead of canceling, UFC turned to an old reliable to rescue the event. A man who turns 44 years old in April called upon to save the day? His name is Anderson Silva, and he's the greatest mixed martial artist in the history of the sport.

Silva's fight against rising superstar Israel Adesanya originally was scheduled to be the "co-main event," the second-to-last bout of the night. They agreed to make it the main event, with the stipulation that it would remain a three-round fight rather than changing it to a five-round main event.

"The Spider," as Silva is known, is no stranger to headlining a UFC event; indeed, on Saturday night, he set a record for headlining gigs.

Anderson Silva tonight will become the first fighter in history to headline 20 different UFC cards. The circumstances are nuts, but that's an incredible achievement. #UFC234

Silva, the 43-year-old native of Brazil, dominated UFC from 2006 until he lost his middleweight belt to Chris Weidman in 2013. But the past five years have been a mess for the future Hall of Famer. Between the losses (in four of his previous six fights), injuries, a controversial win over Derek Brunson in 2017 and a drug suspension, it seemed as if Silva was in irrevocable decline. Until Saturday night, that is.

Adesanya, a 29-year-old from Nigeria, looked a bit timid during the three-round fight. Maybe he was respecting his elder and his fighting idol, maybe he was thrown off by the change to fighting in the main event. Maybe it was strategy by Adesanya to lure Silva into feeling comfortable in the cage. Whatever it was, it allowed Silva to turn back the clock back and put on his most entertaining performance since 2013.

Silva and Adesanya put on an exciting display of high-level kickboxing that left the audience wanting another two rounds. If you didn't see Gastelum parading around with a belt -- which, it turned out, belonged to flyweight champ Henry Cejudo -- and declaring himself the middleweight champ in Whittaker's absence, you might have forgotten Silva-Adesanya was not supposed to be the final fight of the evening.

In the end, UFC and the fans got what they wanted. The sold-out crowd at Rod Laver Arena left happy. Adesanya won, which allows him to continue his climb toward the title. And Silva, for at least one more night, put on a show that reminded the fight world why he is a legend in MMA.

What's next for Silva?

Silva has said he would like to continue to fight for as long as possible. He even had a suggestion for his next fight: a rematch against Nick Diaz at UFC 237 in Brazil. The mercurial Diaz may take some convincing. If Silva can hand-pick his remaining fights, there is a chance we may see him one or two more times. He may be done fighting the elites, but he still has enough left in the tank to entertain us.