A Kentucky grand jury declined to press charges against six police officers in the fatal shooting of a Black emergency medical worker in her apartment, it was announced on Wednesday.

The six Louisville officers will not face charges in the deadly shooting involving slain EMT Breonna Taylor and her boyfriend, according to Kentucky Attorney General Daniel Cameron.

One officer was indicted on charges of wanton endangerment for allegedly firing his weapon into the wall of one of Taylor's neighbors. 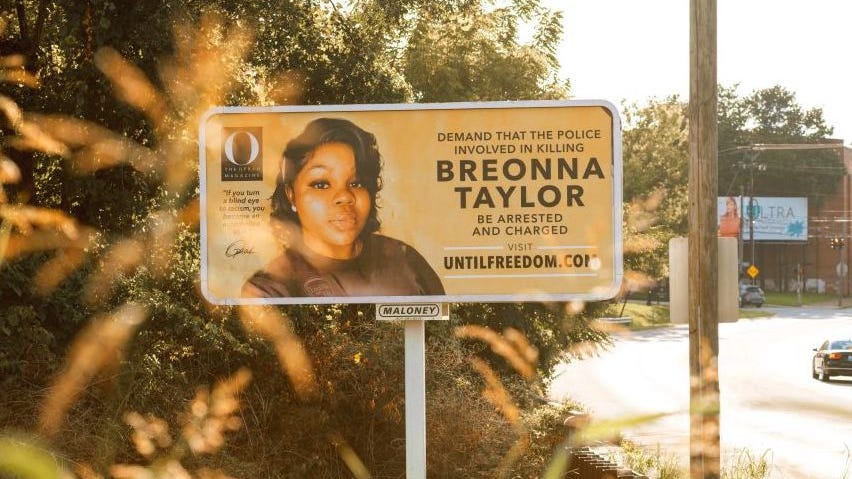 Taylor's tragic death shocked the sports world and became a focal point of calls for justice from countless athletes.

Houston Texans wide receiver Kenny Stills was arrested at a July protest outside Cameron's home, while several NBA stars participating in the league's restart at Disney World dedicated their seasons in Taylor's memory. LeBron James rocked a "Make America Arrest the Cops Who Killed Breonna Taylor" hat, and the Tampa Bay Rays in July boldly declared that Opening Day was a "great day to arrest the killers of Breonna Taylor."

Wednesday's news renewed passions on social media, including those of at least two star athletes who played their college ball at the University of Louisville -- in Utah Jazz star Donovan Mitchell and Los Angeles Clippers star Montrezl Harrell.

I lived in the VILLE for three years of my life and it became another home to me, but wow what’s happen? These are the charges you actually come up with? 😔🤦🏿‍♂️ Nothing to say but WOW SPEECHLESS!

I don’t have many words right now.... but all I can say is I’m praying for the city of Louisville right now!!! 😔😔

ESPN analyst Jalen Rose, speaking during the network's halftime show during the Miami Heat-Boston Celtics playoff game, wistfully quipped that he chose his best threads for the night's show in case he got fired for saying something too charged.

Some expressed their thoughts in a few short words:

Many suggested there are two justice systems:

Disappointed but not surprised. Discharging your gun into an apartment will get you charged, firing your weapon into Breonna Taylor and taking her life will not. It was a sham investigation from the jump. System is CORRUPT https://t.co/nmKLqbX3pF

Breonna Taylor’s killers getting off scot free without even a trial is exactly the systemic rot that people are protesting for. All those protests, all the outcry for justice, and can’t even get a trial. Angry doesn’t even come close to how im feeling. #BreonnaTaylor

Slap on the wrist for MURDER, but 10 yrs for tearing down a punk ass statue!

They treat animals with more respect in this country than they do black lives...

We already knew #BreonnaTaylor wasn’t going to receive the justice that she deserved. I’m not even surprised.