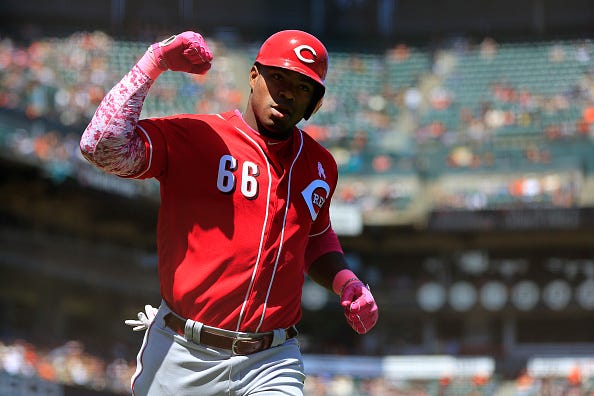 Yasiel Puig was traded from the Los Angeles Dodgers to the Cincinnati Reds in a somewhat surprising move this offseason, but the move to Cincinnati has reignited Puig’s power at the plate.

In the most recent episode of RADIO.COM’s “Big Time Baseball” podcast, co-hosts Josh Lewins and Jon Heyman bring on Reds GM Nick Krall to discuss the impact Puig has had on the team this season, who are 6.5 games back of the NL Central lead and 4.5 games out of the second Wild Card.

The guys also discuss the emotional combined no-hitter the Angels threw the night the team honored late pitcher Tyler Skaggs, the Atlantic League’s “robot umpires,” Justin Verlander’s comments on juiced baseballs and the next generation of talent in the game.

In addition to Krall, WFAN Yankees reporter Sweeny Murti also joins the show as a guest. The show wraps up with a discussion on Mickey Callaway and the Mets, plus Heyman provides some trade insights as the July 31 deadline approaches.