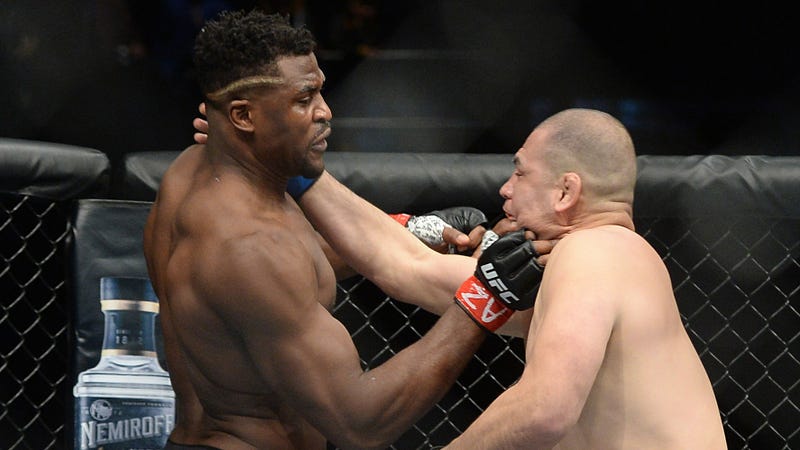 It was a jam-packed weekend in the MMA world: Friday and Saturday were held down by Bellator 215 and 216 on DAZN, followed by UFC's first cable broadcast on ESPN on Sunday night.

Here are some of the highlights and lowlights from the busy weekend.

UFC on ESPN 1: Vicente Luque def. Bryan Barberena via TKO, 4:54 of third round

FIGHT OF THE YEAR so far!

7 minutes of a non-stop slobberknocker below! https://t.co/LldtrSZDFU

The fight of the weekend (possibly of the year) was between Luque and Barberena. The two welterweights held nothing back as they went nearly the entire 15 minutes exchanging power strikes. Luque seemed to have an upper hand as his combos landed early, but Barberena did his best to absorb damage and counter with his own strikes, Almost 300 significant strikes in total led to a final flurry with 12 seconds remaining: Luque landed a right hook and back-to-back knees to Barberena's head for the victory.

The Gracie family is renowned in the MMA world: Gracie's uncle Royce won the first UFC tournament, his grandfather Helio is one of the founders of Brazilian Jiu-Jitsu, and his father, Rickson, is one of the best ever in BJJ. So, yes, there was real pressure for Gracie in his UFC debut against Caceres, who was stepping into the UFC octagon for the 20th time. The hype was real. Gracie had Caceres' back within a minute, and quickly got the tap.

The 30-year-old featherweight has some dream matchups ahead of him if he can reach the top 15 in the division: Brian Ortega, Yair Rodriguez or Zabit Magomedsharipov. Gracie said he would like to stay active and has his eyes on UFC 237 in Brazil.

👊💥😲 @ValerieLouredaa with the hammer fists to cement her win tonight at #Bellator216.

Loureda, a 20-year-old-flyweight fighting out of American Top Team in Miami, was impressive in her professional debut on Friday. Known for her Taekwondo background, Loureda fought off any early jitters and connected on an impressive jab-cross-hook combo into a kick to the body that knocked Fletcher to the ground. Loureda pounced and the fight was soon called as she rained down hammer fist after hammer fist on her opponent. Bellator may have just found a new star.

UFC on ESPN 1: Francis Ngannou def. Cain Velasquez via KO, 0:26 of first round

The 36-year-old Velasquez made his highly anticipated return to the Octagon after a two-and-a-half-year layoff, and though he was the slight betting favorite, no one knew what the former heavyweight champ had left in the tank after numerous surgeries. We were hoping to see Velasquez, an expert wrestler, find a way to manipulate Ngannou to the ground or see Ngannou fight off a takedown and keep the fight standing for an all-out war. Instead we saw a weird exchange in which Velasquez's knee gave out as Ngannou poured on punches until the ref stepped in. The whole thing lasted less than a minute.

It's still difficult to make sense of the replays. Velasquez's knee does give out. Was it due to a right hand by Ngannou or was the knee going anyway? It caused so much confusion that even Joe Rogan and Brandon Schaub, two of the best analysts in the sport, debated and changed their minds on what they actually saw. Ngannou is super strong and no one can take away how powerful he is, but did he get away with a soft win. Certainly this was not the way ESPN wanted their first main event to finish.

The buildup for this fight had gone on for far too long. Both welterweights are known for highlight-reel knockouts, and fireworks were expected -- but never arrived. The first round was a feeling-out round with not much action. No big surprise there: Knockout artists tend to find their distance before engaging. The surprise was when Daley attempted his first takedown. Instead of a "don't blink" fight, it turned into a grinding, tactical fight. There is sure to be a rematch in the future.

Bellator 215: Matt Mitrione vs. Sergei Kharitonov, no contest due to groin kick at 0:15 of first round

Mitrione vs. Kharitonov ends in a no-contest at #Bellator215!

Kharitonov couldn't continue after taking an accidental shot to a ... sensitive area.pic.twitter.com/sRRTjH4DpD

Here's a good example of the unpredictability of any fight. Mitrione attempted an early leg kick, but instead of landing on Kharitonov's thigh, the two turned into each other and the kick landed directly to the groin. This happens more than we would like to even talk about. However, this accidental groin kick was squared up so well that Kharitonov never got back to his feet -- not even after five full minutes to try to recover. Kharitonov elected to take a stretcher out of the cage. Because the kick was accidental, the fight was ruled a no contest. Kharitonov was seen in the crowd the next day at Bellator 216, laughing off someone else's accidental groin shot.

The all-female Invicta FC has produced fighters such as UFC mainstays Rose Namajunas, Paige VanZandt, Cris Cyborg and Amanda Nunes. Gonzalez, who had a brief stint in the UFC, was looking to capture the vacant flyweight belt Friday night when an accidental eyepoke put a stop to the fight in the fourth round. Porto was unable to continue (the photos are gnarly). The fight went to the scorecards, and the belt was awarded to Porto in a decision.

The heavyweight main event at Echo Arena in Liverpool was less than two minutes old when Bouckichou went for a kick and Aspinall successfully checked it. Bouckichou suffered a gross fracture to his right leg, a devastating development for a fighter who had been on a five-fight winning streak. It took Anderson Silva 13 months to return to the cage after suffering the same injury.