A barely recognizable Bryson DeChambeau debuted his new physique at last week’s Charles Schwab Challenge in Fort Worth, finishing one shot back of tournament champ Daniel Berger in a four-way tie for third. DeChambeau has bulked up considerably of late, adding an astonishing 40 pounds to his frame in less than a year’s time.

Naturally, many have wondered how DeChambeau, who has wowed the masses with his Hulk-like features since resurfacing from the coronavirus quarantine, made his drastic transformation from scrawny, 195-pound pipsqueak to the 235-pound goliath who fired a second-round 64 (-7) Friday at the RBC Heritage in Hilton Head. Spending long hours in the gym and honing his craft at the driving range have worked wonders for the talented 26-year-old, but it all starts with DeChambeau’s diet which consists of … whatever the heck he wants.

“I eat whatever I want whenever,” said DeChambeau, who entered Saturday’s action a combined 25 under par in six rounds since returning from a three-month hiatus. “It's a two-to-one carb-to-protein ratio and I literally just have at it.”

While DeChambeau admitted there are limits to what he can consume—he’s remained diligent in monitoring his sugar intake—the former NCAA champ is all for carbo-loading ala Michael Scott. “Carbs are fine because I'm obviously sweating like crazy out here,” said DeChambeau, who recently leapfrogged Tiger Woods to become the world’s 12th-ranked golfer. “I just eat as much as I want right now. It's nice.”

The eccentric fifth-year pro is always looking for an edge, hence his unorthodox club choices (his irons are all the same length) and commitment to overhauling his fitness regimen. “It’s a lot of muscle,” DeChambeau told ESPN’s Bob Harig. “People don't believe me when I say it, but you don't understand my work ethic at that point if you're thinking it's not muscle.”

DeChambeau attributes his increased driving distance—he leads the tour in that metric (323.8-yard average)—to daily protein shakes and longer, more demanding workouts. Davis Love III, who was grouped with DeChambeau for the first two rounds at Hilton Head, also noticed he’s hitting the ball straighter. “What's impressive is how straight it's going,” said Love III, praising DeChambeau’s fast improvement. “It actually looks like it could go farther if he didn't try to make sure it went straight.”

The added strength has also influenced DeChambeau’s club selection. “The distance gain has helped me hit 9-irons and pitching wedges compared to 7-irons and 6-irons into holes,” the SMU alum explained. “That's allowed me to go and attack flags a lot more, be more aggressive, not really have to try and fit into this little spot down on the fairway out here and really attack those flags.”

With DeChambeau feasting like Dwayne Johnson on his cheat day, it may be time for the California native to upgrade to an XL. 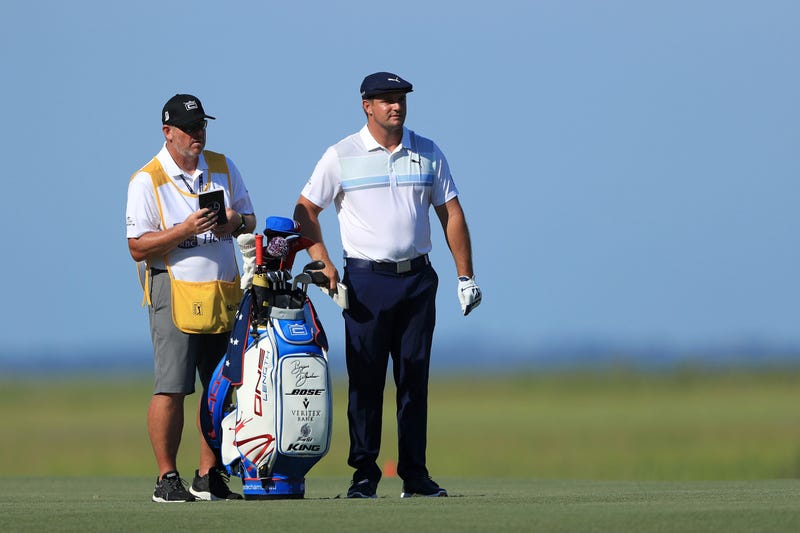 The man is a tank.