Greatness is often associated with championships in professional sports, but even the greats are sometimes dealt the short end of the stick.

Whether or not it is by their own doing, not getting the opportunity, or just being in the wrong place at the wrong time, many legendary players have that one missing component of their legacy: a championship.

Over the last 50 years, we have seen many put together Hall of Fame careers, but whenever they are discussed there is always that “but …” attached to their names. Here are the 10 best players of the last 50 years to never win a championship: 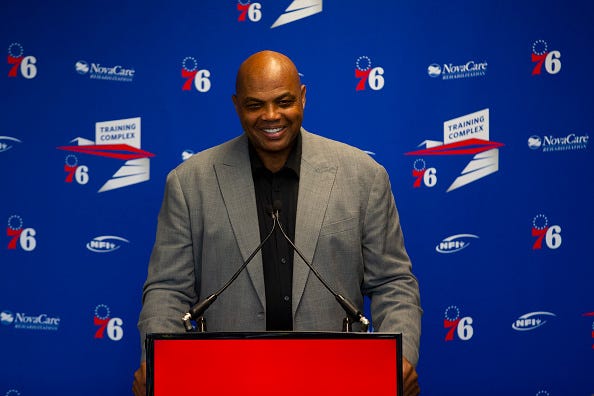 Before Charles Barkley was the zany, outspoken NBA on TNT analyst, he was a Hall of Fame forward and one of the toughest players in the NBA. Barkley was an 11-time All-Star over his 16-year career and was the 1992-93 MVP. He made reached the playoffs 13 times and averaged 23 points and 12.9 rebounds per game, but no titles to show for it. He reached the NBA Finals once, in 1993 with the Phoenix Suns, but Michael Jordan and the Chicago Bulls stood in his way and took care of business in six games. He joined the Houston Rockets in 1996 — two years after their back-to-back titles, but it was too late and the team never made it back to the Finals before Barkley retired.

Clayton Kershaw has been the most dominant starting pitcher of his era and has established himself as one of the greatest of all-time with an MVP, three Cy Young Awards, a Gold Glove and an eight-time All-Star all by age 31. However, he has become the new poster child of postseason failure. Kershaw has failed to pitch like the ace he has in the regular season, posting a 4.43 career playoff ERA in 32 postseason appearances. His most recent failure came in Game 5 of the 2019 NLDS against the Washington Nationals, when he was called on to pitch out of the bullpen in the eighth inning with a 3-1 lead and allowed back-to-back home runs to the first two batters he faced. The Dodgers would lose the game to make it nine seasons in Kershaw's career in which he made the playoffs but came up short. 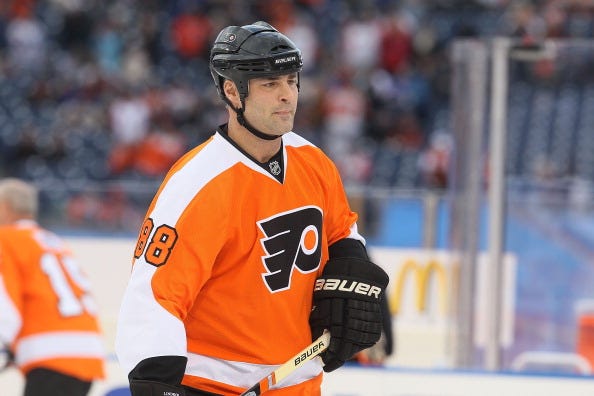 Lindros had a Hall of Fame career in the NHL, but he never got the chance to hoist the Stanley Cup. In six of his 13 seasons, Lindros reached the playoffs and advanced as far as the Stanley Cup Final just once, in the 1996-97 season. He led all players that postseason with 26 points, but had just three in the Finals as the Philadelphia Flyers were swept by the Detroit Red Wings. In 2000, Lindros was traded to the New York Rangers and would not reach the playoffs again until his final season in the NHL in 2006-07 with the Dallas Stars where he played in just three playoff games before the team was eliminated in the first round.

Retweet if Barry Bonds is the greatest player to never win a World Series title. pic.twitter.com/r7ZyHJLmE0

Regardless of how one may feel about the legitimacy of Barry Bonds' numbers, there is no denying he was the most-feared power hitter of his era. Despite an incredible 22-year career, Bonds never won the World Series. He did come close, though. In 2002, the San Francisco Giants fell to the Los Angeles Angels in seven games. Bonds hit four home runs in the World Series, and was walked 20 times — seven intentionally — and struck out just three times. He did, however, go 1-for-8 in the final two games with the Giants having a chance to close out the series.

Patric Ewing missed a wide open layup as time expired. This was a classic 90’s playoff matchup. Tough, physical. IND would eventually lose to ORL in 7 as the Magic went on to play in the Finals.

Patrick Ewing is a Hall of Famer and perhaps the greatest Knicks player of the past 35 years, but he carries the reputation of failing to deliver a championship to New York. The Knicks reached the NBA Finals twice with Ewing — although the second time he did not play due to injury — and even took the Houston Rockets to seven games in 1993-94, but came up short. While Ewing posted respectable postseason numbers — 20.2 points and 10.6 rebounds per game — he is remembered more for his infamous moments, none bigger than the 1995 Eastern Conference Semifinals against the Indiana Pacers when his layup at the buzzer hit the back of the rim and eliminated the Knicks. 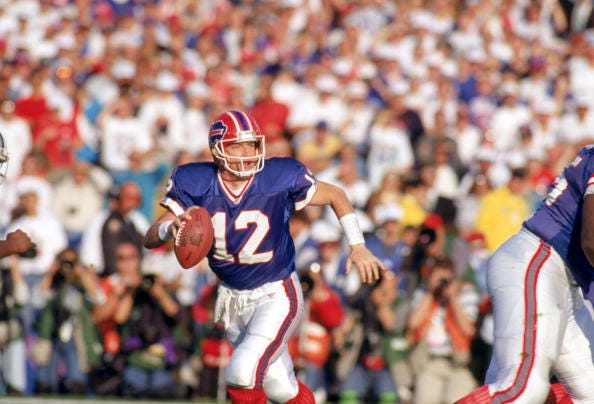 Jim Kelly's legacy is perhaps the most-altered of any player who did not win a championship in his career. The Hall of Fame quarterback reached the Super Bowl four consecutive seasons, and in each season the Bills lost. He lost his first one, courtesy of kicker Scott Norwood's infamous "wide right." The second time he tossed four interceptions in a 37-24 loss to the Washington Redskins. The third time, Kelly was battling an injury and was replaced by Frank Reich after tossing two interceptions in a 52-17 beating from the Dallas Cowboys. The following year the Cowboys beat them again, 30-13, with a healthy Kelly who threw for 260 yards and an interception. While Buffalo still reveres Kelly, had any of those outcomes been different we all would likely have a different view of the quarterback.

(1997) Tie game in game 1 of the NBA Finals with Karl Malone at the line. Scottie Pippen goes up to him and whispers, "Mailman doesn't deliver on Sundays." ... Malone misses both free throws and Jordan hits a buzzer beater the very next possession. Legendary. 🗣

"The Mailman" is one of the greatest NBA players of all-time. He is the second all-time leading scorer in NBA history behind Kareem Abdul-Jabbar and seventh in rebounds. Malone reached the playoffs 19 times, including 18 with the Utah Jazz, but he never won the NBA Finals. Jordan and the Bulls got in his way twice — beating them in the 1997 and 1998 NBA Finals. Malone got there again at the end of his career with the Los Angeles Lakers in 2004, but they were swept by the Detroit Pistons. 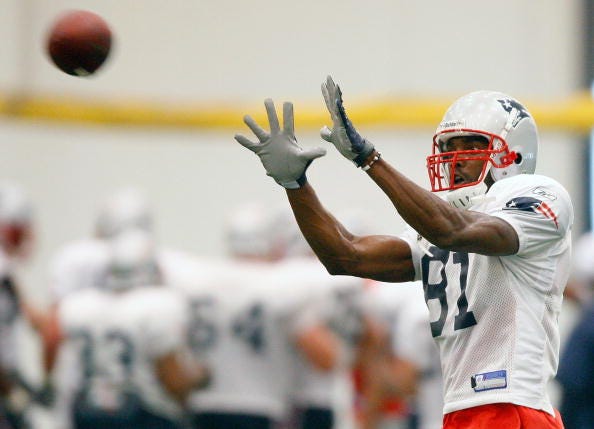 Randy Moss is one of the all-time great wide receivers in the NFL, and he played for one of the great all-time teams with the 2007 New England Patriots. It was Moss' first year with Bill Belichick and Tom Brady and they went 16-0 and were ready to cement themselves as the greatest team in NFL history to give Moss his first Super Bowl win. But the New York Giants stood in their way and pulled off one of the greatest upsets of all-time. Moss was targeted 12 times and had five catches for 62 yards and a touchdown, but it was not enough. He returned to the Super Bowl again as a member of the San Francisco 49ers in 2012 as his career was coming to an end, but they also came up short, falling to the Baltimore Ravens, 34-31.

Barry Sanders throwback. Wow is the only word my mind can come up with. 🎥 courtesy @nflthrowback pic.twitter.com/eHkinjTxCr

Barry Sanders is alongside Jim Brown as one of the greatest running backs of all-time, but unlike Brown, Sanders never won a championship. In fact, Sanders made the playoffs just five times and advanced beyond the first round just once in his 10-year career. The Lions were never able to build a championship-caliber team around Sanders and because of that, he never even sniffed a Super Bowl.

It is hard to find anyone who carries around the stigma of failing to win a championship in his career more than Dan Marino. The Hall of Fame quarterback and Miami Dolphins great put up numbers during the regular season that were not even touched until recently when the NFL began adjusting the rules to make the game more passer-friendly. The one time Marino did reach the Super Bowl — in 1984 — he threw for 318 yards and a touchdown, but also two interceptions in a 38-16 loss to Joe Montana and the San Francisco 49ers.