"My perspective on what sports were, how fans reacted and how the games were played was very much impacted by growing up in Philadelphia."

Michael Brook was a co-founder of EA Sports and a video game designer/producer as Electronic Arts attempted to try their hand at sports simulation games. What we learned at RADIO.COM Sports after an extended conversation with the Father of the 16-bit Sports Legend, is that growing up as a fan of Philadelphia sports played a significant role in the development of two of the most successful video game franchises of all time.

- While Buffalo Bills' Hall of Fame edge rusher Bruce Smith was Madden's most unstoppable defensive player, Brook says that he purposely "jacked up" Randall Cunningham's speed rating to make the Eagles' quarterback the most dominant player in the early games.

- Decades later, Cunningham remains one of the most dominant players in Madden, as his legacy character gets a 98 overall rating in Madden 20. His speed remains "jacked up," as he has a 96 scramble rating, making him nearly impossible to stop if he gets outside the pocket. Brook says he remains inspired by how many people are reached by the games he helped to launch. 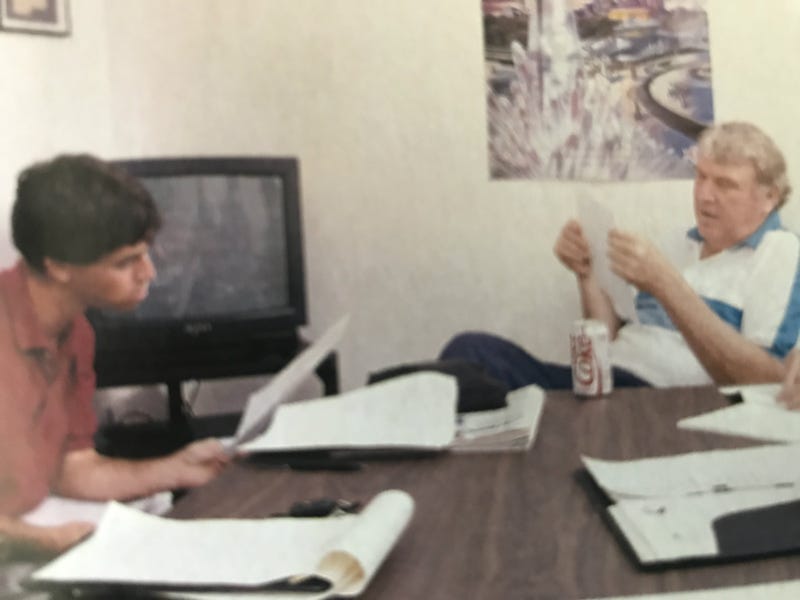 Michael Brook and John Madden work on one of the early Madden Football games with EA Sports.

- Brook says as he was working on the initial NHL games, his idea of the proper way to play hockey at that level was based off of the Broad Street Bullies.

- Though Jeremy Roenick wasn't yet playing for the Flyers, he was extremely effective in the early games because of a bug. Brook says that he didn't find out until years after that players in the early NHL games actually benefitted from weighing less when it came to checking. For example, if the 205-pound Roenick checked a player that was 230 pounds, a glitch in the game hit the 230 pound player with the force of 230 pounds, rather than the 205 pounds that Roenick weighed. We're not sure if Vince Vaughn and Jon Favreau were aware of this.

- Brook says that every sports game that he's ever been involved with has "hearty booing" in it, certainly influenced by watching a lifetime of events at Veterans Stadium.