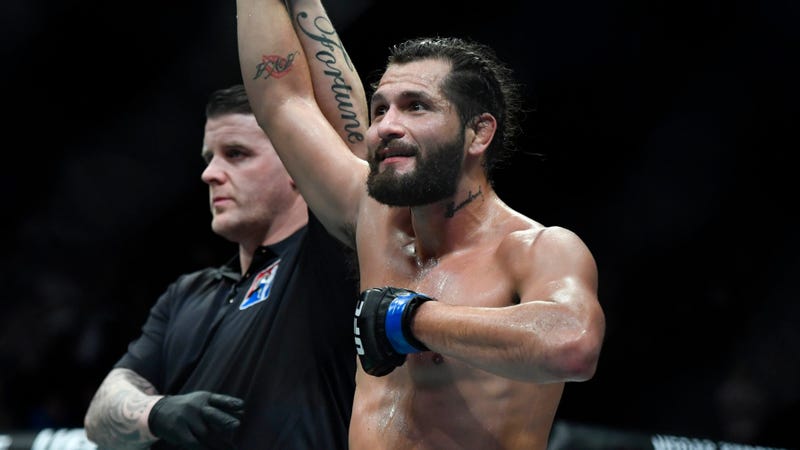 The 02 arena in London was silenced Saturday night when English favorite Darren Till was knocked out by American challenger Jorge Masvidal in the second round of UFC Fight Night 147's five-round main event. What was meant to be a straightforward rebound fight for Till after his loss to former welterweight champ Tyron Woodley instead produced chaos in one of the craziest divisions in UFC.

The 34-year-old Masvidal -- a Miami native who entered the fight ranked No. 11 among welterweights -- looked fresher than ever coming off a 16-month layoff, and came up with a brilliant knockout.

Masvidal said after the fight he does not want to get back in the cage against anyone ranked lower than No. 2 in the division. Kamaru Usman, who became champion by dethroning Woodley earlier this month, and his manager, Ali Abdelaziz, seem to want to avoid a title defense against the controversial Colby Covington. Does that open the door for Masvidal? Well, not exactly: Usman is recovering from a double hernia and needs to take some time off. Plus, UFC matchmakers know having the Nigerian defend against Covington or Woodley would sell better.

Just spoke to UFC welterweight champion Kamaru Usman's manager Ali Abdelaziz: "We think Jorge Masvidal deserves the next title shot. Not Colby Covington. Colby is a terrible person and doesn't deserve it. Jorge just knocked out Darren Till like that? He should be next."

Ben Askren, who won his UFC debut in controversial fashion over Robbie Lawler, had flown out to London with the intention of confronting and challenging Till (who was ranked No. 3) after his victory. That didn't happen. Masvidal-Askren isn't likely either. Masvidal doesn't want to face a specialist such as Askren, and Askren doesn't want to face a brawler.

Then there's Leon Edwards, the 27-year-old No. 10 ranked welterweight coming off a win over No. 13 Gunnar Nelson on Saturday in a split decision that extended his winning streak to seven fights. Going by the rankings, Masvidal-Edwards doesn't make too much sense, but a run-in between the two fighters after their bouts may have set up UFC for a grudge match.

Still, the best option for Masvidal's next opponent is the winner of this weekend's fight between Stephen "Wonderboy" Thompson and Anthony Pettis at UFC Fight Night 148 in Nashville. Masvidal's previous fight before wiping out Till was a split-decision loss to Thompson in November 2017, after which Masvidal tooks a hiatus and participated in a Spanish-language reality television show. (Thompson, a 36-year-old kickboxer who continues to hang around the top of the division, lost a questionable decision to Till last May.) Pettis returns to welterweight for the first time since 2008 after stints at lightweight and featherweight.

If not the winner of Thompson and Pettis, Santiago Ponzinibbio -- who is angling for a fight with Woodley -- would make perfect sense for Masvidal. The 6-foot Argentinian is on a seven-fight win streak and is currently ranked No. 7. Masvidal and Ponzinibbio would be an exciting matchup: Both fighters like to stand and exchange. Ponzinibbio has a very strong Brazilian Jui-Jitsu background, but Masvidal trains with some of the best wrestlers out of Amercian Top Team and is no slouch on the ground. Given the choice, I'd like to see Masvidal-Ponzinibbio next.

The 26-year-old Till, meanwhile, looks to regroup after back-to-back losses that followed a 17-0 start to his career. The heavily hyped southpaw's fall has been just as rapid as his rise. With weight-cut issues and now a losing streak, it may be time for Till to realize the middleweight division may suit him better.