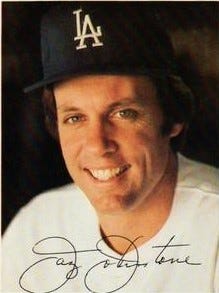 Former big league outfielder Jay Johnstone, who won World Series rings with the New York Yankees and Los Angeles Dodgers and spent time with several other teams, including the Philadelphia Phillies, the California Angels and the Chicago Cubs, has passed away at 74 years old.

According to his daughter Mary Jayne Sarah Johnstone, he died last Saturday due to complications from COVID-19 (via Beth Harris of the Associated Press). He also suffered from dementia and had been living in a nursing home in the Granada Hills neighborhood of Los Angeles.

With a 20-year MLB career that was represented by two World Series rings and a reputation as a hilarious and friendly player, Johnstone left a positive imprint in every ballpark he played at. He had some memorable moments as a ballplayer, including his timely two-run blast during the 1981 World Series that gave his Dodgers a key lead (via MLB Film Room).

A .267 career hitter, Johnstone enjoyed a consistently productive career as an outfielder and frequent pinch-hitter who could be relied upon in crunch time. His strongest stretch of seasons came in the mid-1970s as a near-regular for the Phillies, in which he posted a .303/.368/.455 slash line over nearly 500 games. His best years came in 1975 and 1976 in Philadelphia, a span in which he batted a team-high .323.

In limited postseason play, Johnstone also provided strong numbers. In 21 career at bats in the playoffs, most of which came in NLCS appearances, Johnstone had 10 hits and five RBI for a slash line of .476/.500/.762.

But his impact was also felt off of the field, with his constant positive energy and his tendency to pull the occasional prank making him a fan favorite on many teams. Rory Costello, a chief editor for SABR's BioProject biographies, opened his thoroughly-researched work on Johnstone by calling him "one of the premier flakes in big-league history." For reference, a flake is "an odd or eccentric player; a kidder or comic," (via Costello at SABR).

And, boy, was he a comic. Read Costello's awesome biography for Johnstone's best moments, including trapping Tommy Lasorda in his office, minimizing teammate Ron Cey's locker and more. Johnstone's daughter also recalled pranks he would pull around the house, saying that he would always make her and her friends laugh (via Harris).

“He wanted to find the humor in life no matter how serious things got,” she said. “That was his motto to everything, bring a smile to people’s faces. Everyone loved him.”

Several members of the MLB Twittersphere remembered Johnstone fondly upon hearing of his death.

The Dodgers are saddened by the passing of former Dodger Jay Johnstone and offer their deepest condolences to his family and friends. pic.twitter.com/DePWvZX0le

We are saddened to learn of the passing of Jay Johnstone. The Yankees organization extends its deepest condolences to Jay's family and friends. He will be missed. pic.twitter.com/6LKEMRfd6t

RIP Jay Johnstone, one of the game’s great characters https://t.co/6WcqDhxrUb

I was saddened to hear that former #Phillies great guy Jay Johnstone has passed away at age of 74. Played 5 seasons with Phils hitting over .300 in 2 of those seasons. He could hit but more so a funny wonderful guy. #RIPJayJohnstone ⁦@SportsRadioWIP⁩ pic.twitter.com/9Mw8bnkUWc

I used to train with Jay Johnstone through my lifelong baseball mentor and hitting coach Reggie Smith. We used to play pranks on each other (he’s who I got it from). He told the very greatest stories and was one of the kindest people I’ve ever been on a field with. 😢 https://t.co/SJEpWMkOK4