Scouting in any sport is no easy task. But it’s not especially hard when a guy like Ken Griffey Jr. starts to emerge as a prospect. His immense talent was quite apparent from a very young age, and having a three-time All-Star outfielder as a father definitely doesn’t hurt.

Scouts flocked to Archbishop Moeller High School in the mid-1980s to watch the insanely athletic kid play ball, knowing as soon as they laid their eyes on him that they were potentially witnessing greatness. Some of them had been to the campus before, perhaps to watch 1982 high school senior Barry Larkin on a similarly pleasing scouting trip.

San Francisco Giants scout George Genovese came to Archbishop Mueller to watch Griffey in the summer of 1986, comparing him to Darryl Strawberry and considering him a potential top-round choice if he continued to develop. Seattle Mariners scout Bob Harrison agreed, calling him the “type that could hit 30 (home runs) a season some day.” Not bad for a rising junior in high school. But not as high as others would go.

Roger Jongewaard, a scout for the Seattle Mariners, lauded the high schooler for his “rare combination of speed/power/instincts.” On top of that, he said he made the game look easy and had superstar potential. His comparison? Barry Bonds, but “much better… at (the) same stage.” Jongewaard’s only knock was Griffey’s immaturity, which isn’t much of a knock considering he went on to be known as “The Kid.”

At just 17 years old, scouts knew what they saw in Griffey, and they were right on. But the same isn’t the case for other players. Several of the league’s biggest stars were severely underestimated as revealed by shocking scouting reports that are part of the National Baseball Hall of Fame’s massive digital collection. All of the scouting reports used in this piece were pulled from the archive of over 3,600 documents. Of course, the sample scouting reports we used are the ones that are particularly negative, and we definitely don’t intend to say that all scouts viewed these players in the same light.

Let’s see who some scouts missed the mark on, causing teams to pay in hindsight. 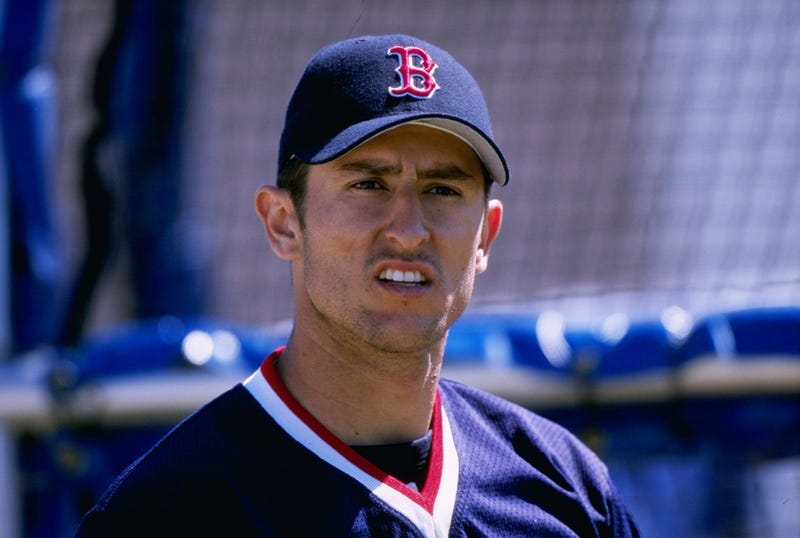 At his peak, Garciaparra was prolific in terms of offensive production from the shortstop position. Photo credit (Rick Stewart /Allsport via Getty Images)

- Handles bat well enough to be 2 hole hitter, will hit behind runners. Will bang the ball around (and) use all fields, no real HR power… Upper cut swing at times thinks he has some HR type power, will be fins when learns to control swing more (consistently)... Full package read in 1 ½ to 2 (years). - Ed Pebley, Chicago White Sox

- Plus arm… good range… makes contact at plate and all the plays in the field. Bat wrapped and on shoulder too long and lazy… plays too nonchalant… Defensive player… needs new approach at the plate. - Mark Bernstein, Chicago White Sox

- Natural SS… Warning track power… (Below average) bat speed… Should be able to hit .260 and be a premier defensive player. Would take as our No. 1. - George Bradley, Chicago White Sox

The White Sox scouting team seemed to come to the consensus that Nomar would become a defensive wiz at shortstop without any real presence at the plate. The Red Sox may have been more optimistic, selecting him at No. 12 before the White Sox could make their No. 26 selection. It paid off big time for Boston, as the seemingly defensively-oriented Garciaparra led the league in hits and triples in just his second season (with 30 home runs, as an aside) and captured two consecutive batting titles just a couple of years later. 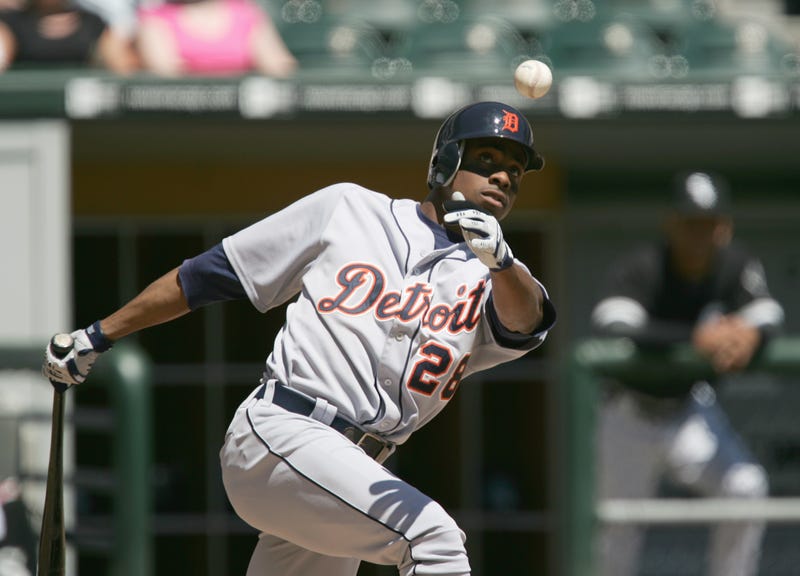 To some scouts, it would have been a surprise if Granderson ever achieved league-average power. He far surpassed that. Photo credit (Jonathan Daniel/Getty Images)

Three scouts from the Diamondbacks (Kris Kline, Mike Daughtry, Phil Rizzo) weighed in on the University of Illinois outfielder, giving him the following projected future grades across several categories (cumulative). 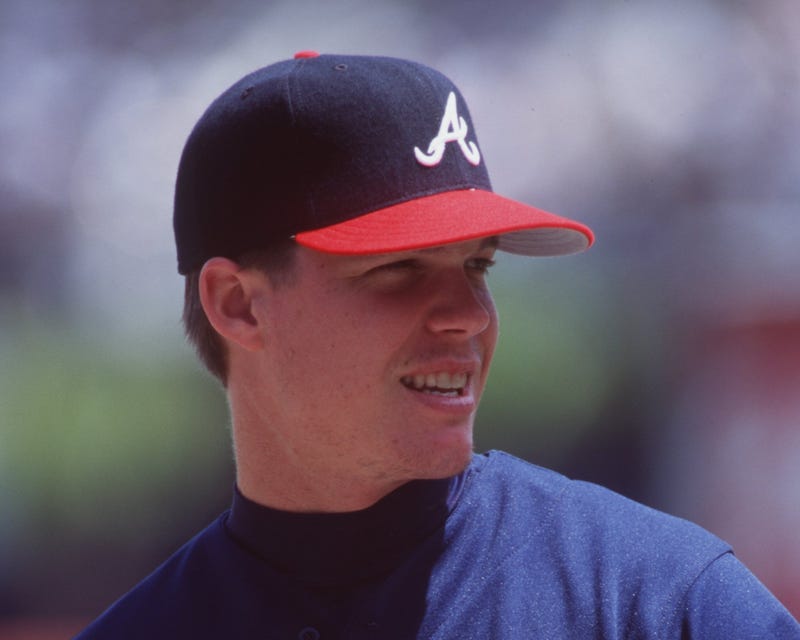 Despite eventually becoming the No. 1 overall pick in the 1990 draft, some scouts still had their doubts about Chipper. Photo credit (Stephen Dunn/Getty Images)

- Was not aggressive w/ bat. Did not drive ball from either side. Displayed non-chalant attitude at all times… He was a disappointment to me. In the 8 games he managed to collect only 1 hit and hit very few balls well… Young player with 2 (average) tools. - Alex Cosmidis, Chicago White Sox

Of course, Cosmidis’ scouting report may not have been the popular opinion at the time, as Jones was the No. 1 overall pick of the 1990 MLB Draft. Cosmidis must have just caught a bad stretch of games from Jones, and it’s hard not to be discouraged from a one-hit performance over an eight-game span. It wouldn’t have necessarily mattered, though, as the switch-hitting slugger was not on the board when the White Sox selected at No. 4. They took right-handed pitcher Alex Fernandez who was solid if unspectacular in his career. Future Hall of Famer Mike Mussina was selected 16 picks later. 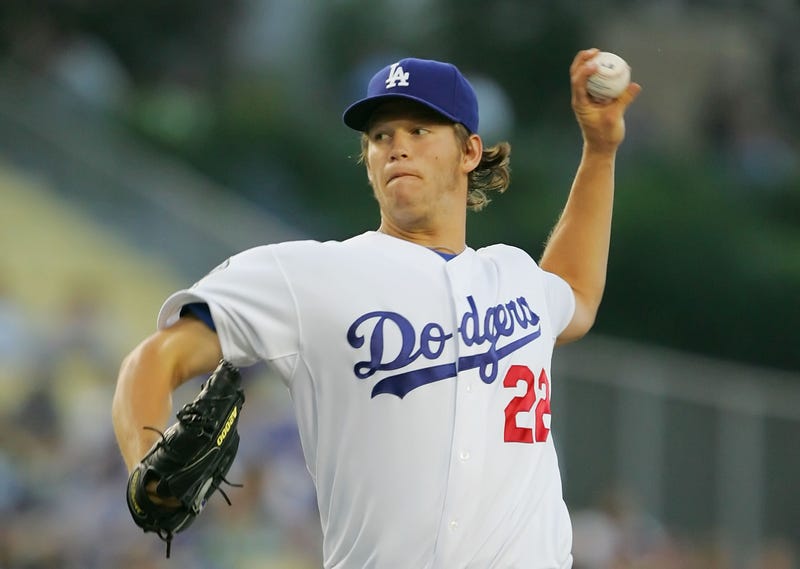 Kershaw's famous curveball was actually viewed as a weakness, according to one scouting report. Photo credit (Lisa Blumenfeld/Getty Images)

There was good and bad in Gerhardt’s report on Kershaw, but the bad centered on his curveball, which Gerhardt wrote about in the “weaknesses” section of the scouting report. If it was weak then, it certainly isn’t now.

Only one can be @MLB’s best pitch.

And Kershaw’s ceiling ended up being a lot higher than a reliever. How about five ERA titles, three Cy Young awards and an MVP? 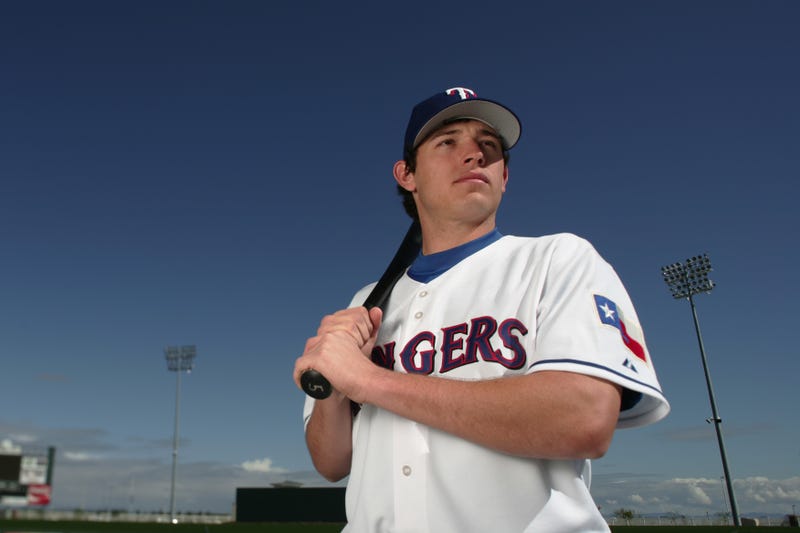 Ian Kinsler is one of the biggest draft steals since 2000, considering his 17th round selection. Photo credit (Jed Jacobsohn/Getty Images)

- Young Robby Thompson… Handles bat well, sprays ball around the field… See as utility Major Leaguer… Not flashy, type of kid who doesn’t knock your socks off first couple of times but grows on you with his consistency and ease at which he does things. Sleeper on my draft list. Gut feel guy. - Louie Medina, Arizona Diamondbacks

The Diamondbacks trusted Medina’s gut, drafting Kinsler in the 29th round of the 2000 Draft and the 26th round of the 2001 draft, but in both cases Kinsler decided to go back to school and grow. By the time the 2003 draft rolled around, Kinsler was scooped up earlier by the Rangers, but still went relatively late in the 17th. He became more than just a utility guy, starting at second baseman and becoming one of the best five-tool infielders of the 2000s en route to four All-Star nods and a pair of 30-30 seasons. Credit to Medina for seeing something in Kinsler when others didn’t. 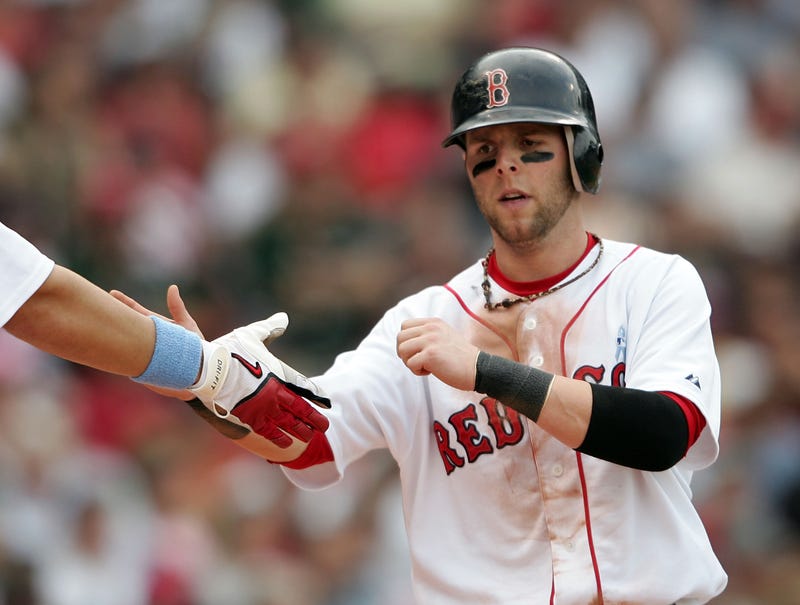 - Hitting: 50. Power: 30. Physically maxed out. (Small) scrappy frame… (similar) to David Eckstein. Bat (control) w/ consistent contact. Hits where pitched, lots of doubles to gaps… Unusual hit approach that works for him… No useable (power). Guy you want on your team. Does what it takes to win. - A. Campbell, Major League Scouting Bureau

- Hitting: 55. Power: 20. Speed: 30. Stealing: 25. Finds a way to make plays without the tools scouts look for… A pest, no fear, competitor. Lacks the strength, no useable power… Speed (below average). Chances are certain tools will not get to level we wish they would be… He has to be with the right club to advance but does not fit as a utility guy - feel a bit more comfortable with a guy that (Chicago White Sox) can develop tool and become an impact performer… Make up and intangibles are off the chart. - John Kazanas, Chicago White Sox

An average hitting projection turned into a .299 career average, including a career-high .326 in 2008, Pedroia’s third season. He additionally led the league with 118 runs, 213 hits and 54 doubles in that campaign. A well below average power projection turned into seven years of double-digit home runs, which I would consider above average for a second baseman. Poor stealing and baserunning projections turned into four seasons of 20 or more stolen bases. Pedroia defied all the odds and was immediately brought back into the minds of hopeful Red Sox fans after the team’s somewhat confusing draft pick of Nick Yorke in the 2020 draft. 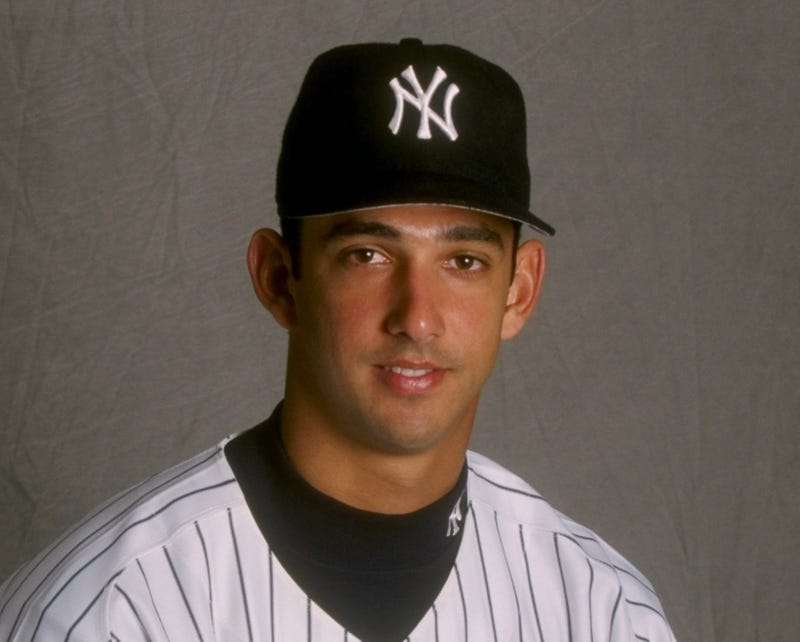 A 24th round selection, the Yankees found a franchise catcher and more in Posada. Photo credit (Scott Halleran/Getty Images)

- This guy does a real nice job behind (the) plate… Switch hitter that is not an automatic out at the plate… Needs to make more contact because he is not going to have real good power… Could be a valuable late inning guy as well as someone that could fill in a couple games here and there. - Doug Laumann, Chicago White Sox

Posada filled in for the Yankees a decent amount after they used a 24th round pick on him. He filled in behind the plate 1,574 times, to be exact, on his way to five All-Star selections and four World Series rings. His power certainly was an aspect of his game, as he clubbed 20 or more home runs eight times in his career. His 275 career round-trippers is good for ninth among catchers in MLB history. 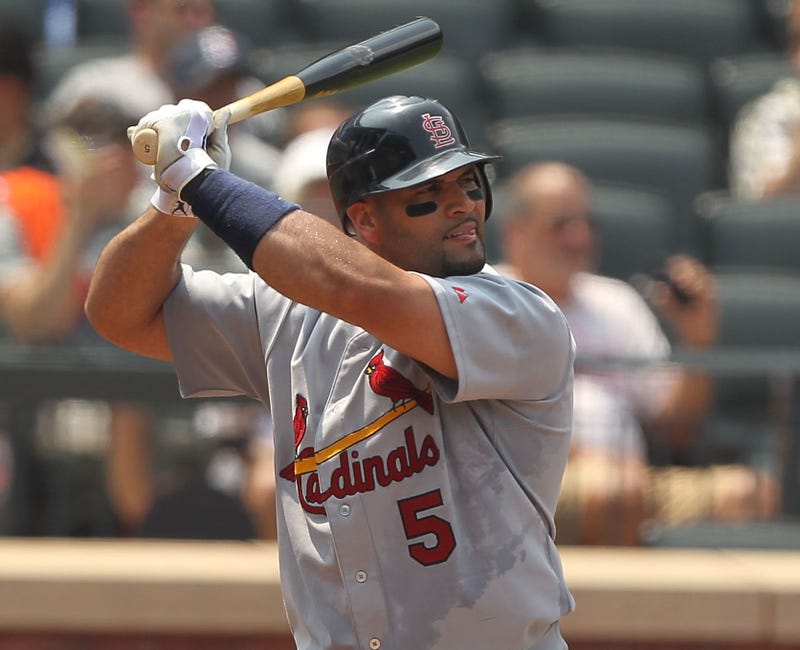 Pujols, drafted in the 13th round, is arguably the biggest draft steal in MLB history. Photo credit (Al Bello/Getty Images)

- Good bat (speed) with very strong hands. Competes well and battles at the plate. Contact seems fair. Swing gets a little long at times. Will over pull. He did not hit the ball hard to CF or RF. Weight will become an issue in time. - Gary Johnson, Kansas City Royals

Johnson wasn’t as harsh as Bove, giving him an $80,000 valuation as opposed to Bove’s $20,000. Bove additionally scored his future hitting skill as a 40 (below average) and his power as a 55 (slightly above average), while Johnson’s figures were 50 and 60, respectively. It’s safe to say that they both completely missed the mark in this regard, as Pujols is arguably the greatest pure hitter in MLB history. Additionally, weight was never a problem for the longtime Cardinals and Angels slugger. Still, his reports must have held some weight (no pun intended), as he was selected in the 13th round and was one of the biggest draft steals of all time.