At this time a decade ago, Mike Trout was a senior at Millville Senior High School in New Jersey. The 18-year-old would be selected by the Los Angeles Angels with the No. 25 overall pick in the 2009 MLB Draft, but even he couldn't have imagined what the 2010s had in store for him.

FanGraphs says that Trout's 73.4 fWAR between 2010 and 2019 is by far the highest mark for the decade, with the next closest competitor - San Francisco Giants' catcher Buster Posey - coming in at 53.0.

Not only did Trout establish himself as the sport's most dominant player in the 2010s, but one of the greatest that the game has ever seen. According to Baseball Reference, he already tops Hall of Famers Ken Griffey Jr. and Joe DiMaggio in key metrics that Hall of Fame voters use to gauge worthiness. If Trout, a higher schooler a decade ago, retired today you could make a strong case for him being worthy of induction into the Baseball Hall of Fame on the first ballot.

Perhaps the next MLB superstar is still in high school or the lower levels of the minor leagues and we'll look ridiculous for not mentioning him in this list. With that possibility acknowledged, here's RADIO.COM Sports' All-MLB projections for the next five seasons: 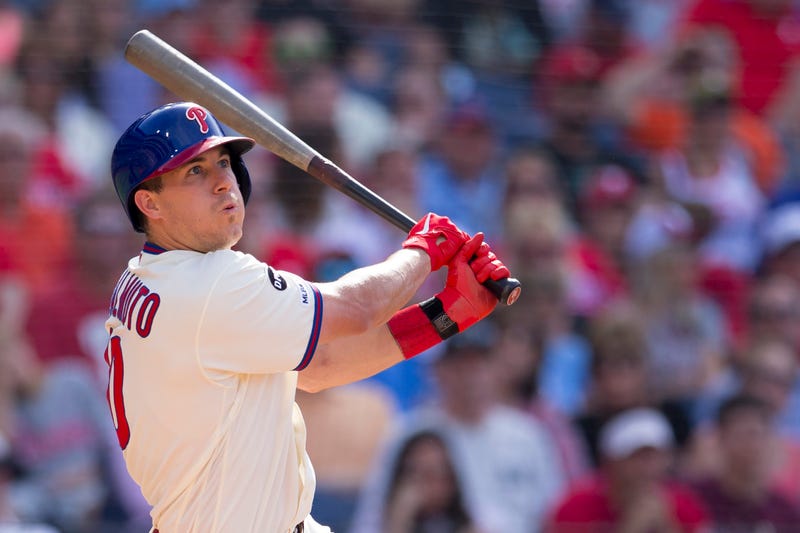 Realmuto just turned 29, so he's unlikely to still be performing at his peak level in four or five seasons. But without an obvious alternative, he's the safest pick here.

In 2019, his first season with the Phillies, Realmuto was the team's lone All-Star, slashing .275/.328/.493 with 25 home runs, 83 RBIs and a 5.7 fWAR. Realmuto threw out 37 would-be basestealers a season ago, which allowed him to win his first National League Gold Glove Award. FanGraphs actually says that he was the best overall fielder at any position in baseball in 2019.

After the 2020 season, Realmuto will become eligible for free agency. The guess here is he'll ultimately remain in Philadelphia, though he's already been an All-Star with both the Phillies and Miami Marlins. Wherever Realmuto spends the next five seasons, he figures to be very productive. 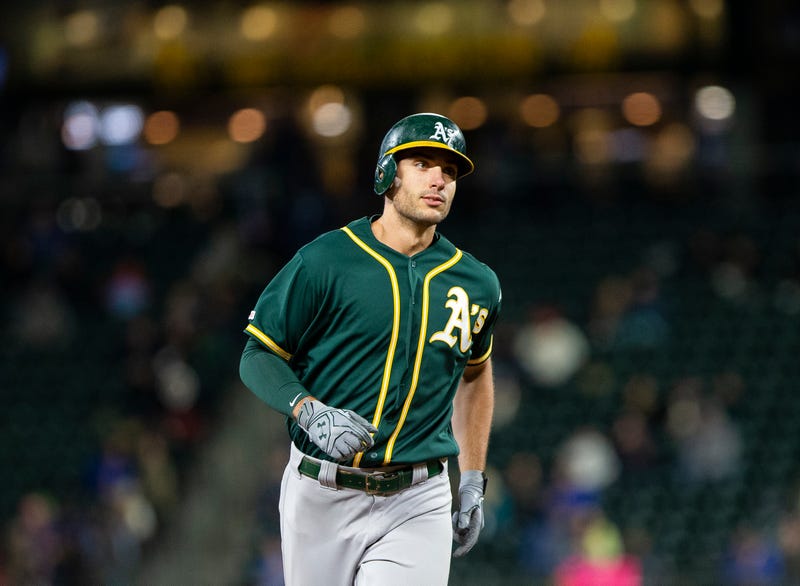 In each of the past two seasons, the A's have won 97 games and one of the two American League Wild Card spots. Among the nationally underrated players on their team, Matt Olsen has been a major reason for their success.

It's hard to argue with anyone that thinks New York Mets' first baseman Pete Alonso, who hit 53 home runs a season ago, should be the pick here. However, Olson, 26, hit 36 home runs himself, and is already a two-time Gold Glove Award winner. A year ago, Olson posted 18 defensive runs saved, while Alonso posted -3 in the same category. That's what ultimately made Olson the pick here.

Some consideration was given to Freddie Freeman, the long-time Atlanta Braves' first baseman as well. For as much as it feels like Freeman has been around forever, he's still only 30 and coming off of a 38-home run, 121-RBI season. It feels like a relatively safe bet that Freeman has three or four really good seasons left. Any more than that and he may find himself in the Hall of Fame discussion. 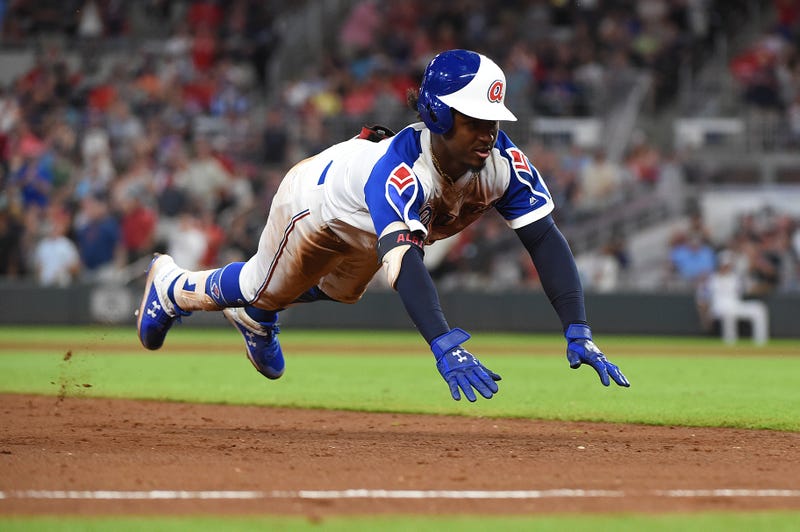 Albies and the Braves might represent the biggest threat to the Los Angeles Dodgers in the National League in 2020. And the Braves, wisely, have assured Albies will remain in Atlanta for a long time, as they inked him to an extremely team-friendly seven-year/$35 million deal that runs through 2025 and has two affordable club options afterwards.

We would be remiss not to mention Arizona Diamondbacks' star Ketel Marte, who can play just about every position on the diamond. After a solid - albeit, unspectacular - start to his major league career, Marte exploded in 2019, slashing .329/.389/.592 with 32 home runs, 92 RBIs and a 7.1 fWAR. Marte isn't as safe of a pick as Albies, but if he's able to produce at a level anywhere near what he did in 2019, he's going to become a perennial National League MVP candidate. 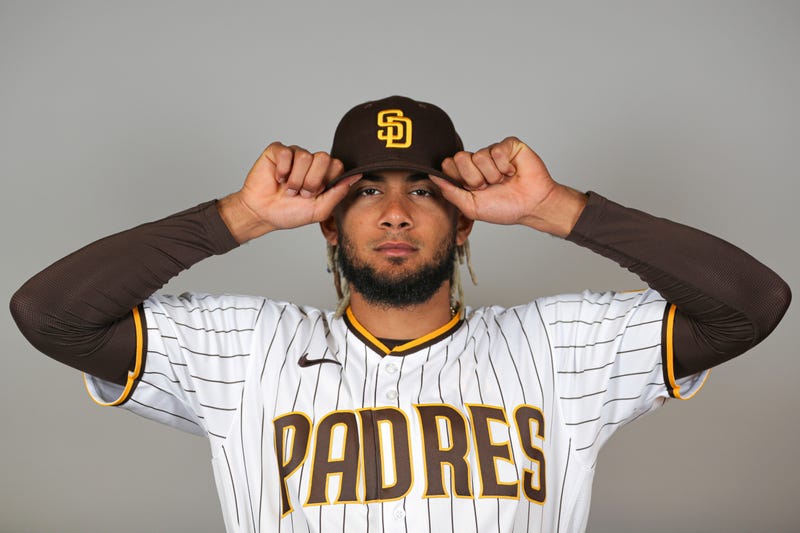 In his first 84 major league games, Tatis Jr. slashed .317/.379/.590 with 22 home runs, 53 RBIs, 16 stolen bases and a 3.6 fWAR. Forget National League Rookie of the Year, if Tatis Jr. continued that type of production over a full season, he would have been in the National League MVP discussion.

So while we need to acknowledge that hamstring and back injuries limited Tatis Jr. to just over half of a season, it's also worth pointing out that he flashed Hall of Fame potential in 2019. If Tatis Jr. is able to stay healthy consistently, the 21-year-old could help the Padres to win their first World Series title.

The safer - and what will perhaps prove to be the correct - selection would have been Francisco Lindor. Since the start of the 2016 season, FanGraphs says that Lindor has been the fifth most valuable position player in all of baseball. At 26, Lindor has a chance to be remembered as one of this generation's most dominant players. That he's not the pick here isn't an indictment on him, but rather indicative of how special Tatis Jr. looks to be. 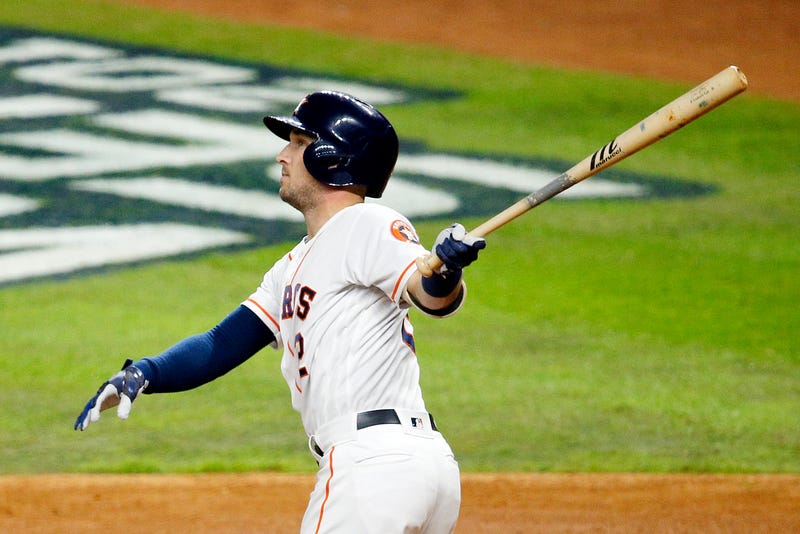 Alex Bregman has emerged as one of the game's most dominant stars. Photo credit (Bob Levey/Getty Images)

Whenever the country is able to get control on the spread of COVID-19, the Astros will return to being public enemy No. 1 in the baseball world. Bregman, who didn't come off as especially remorseful for his role in the team's sign-stealing scandal, figures to receive a heavy chorus of boos at every opposing stadium for the rest of his career.

That said, the 25-year-old also slashed .296/.423/.592 with 41 home runs, 112 RBIs and a staggering 8.5 fWAR in 2019, finishing second in American League MVP voting. A year ago, Bregman hit 36 points higher away from Minute Maid Park. In 2017, the season most in question in the sign-stealing scandal, Bregman hit 12 points higher in road games. This isn't to say he didn't benefit from the team's cheating, but there's no indication that he won't continue to put up Hall of Fame-caliber numbers for at least the next few seasons.

If Bregman ends up spending more time at shortstop over the next five seasons, any of Anthony Rendon, Matt Chapman, Nolan Arenado, Rafael Devers or Yoan Moncada could fill this void. Baseball is historically deep at the hot corner right now. 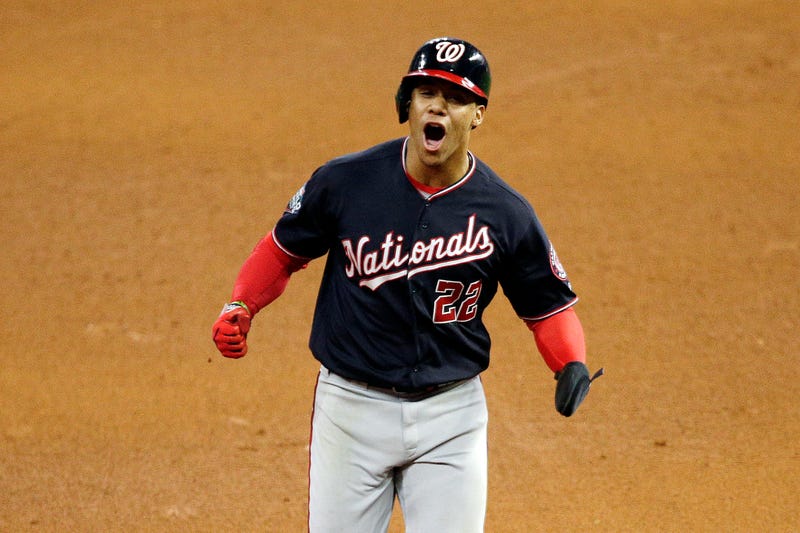 Over his first two major league seasons, Soto has slashed .287/.403/.535 with 56 home runs, 180 RBIs and an 8.5 fWAR. Oh, he also hit five home runs and drove in 14 runs en route to leading the Nationals to their first World Series title last October. That's not a bad resume to have before your 22nd birthday, huh?

It's true, to this point, Atlanta Braves' outfielder Ronald Acuna Jr., just 22 himself, is a more accomplished individual player. Betting on him over the next five seasons would be extremely safe, especially when you consider he's probably a defensive upgrade over Soto. However, the bet here is that like Bregman at third base, Soto will become such a dominant offensive force over the next five seasons that he is viewed as the best left fielder in the sport even if he isn't on par with some other options defensively.

Whether you lean Soto or Acuna Jr., you can agree that a future of having to face each 18 times a season looks pretty bleak for the New York Mets, Philadelphia Phillies and Miami Marlins. 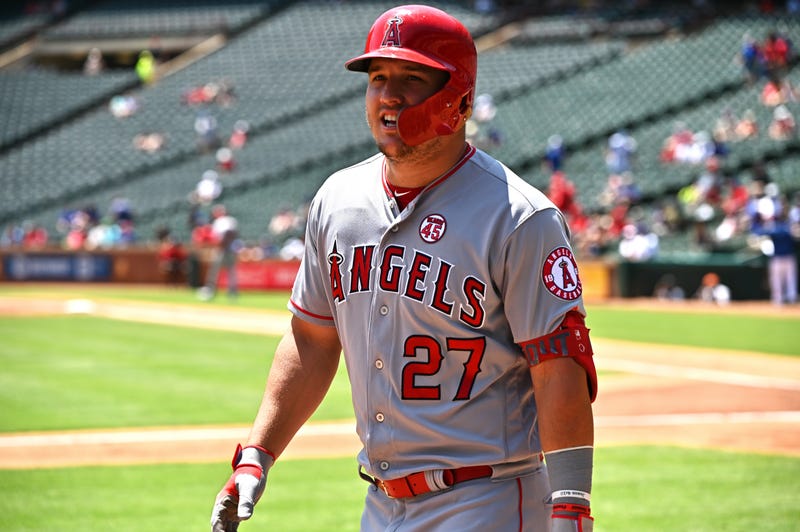 Mike Trout is one of the greatest baseball players of all time. Photo credit (C. Morgan Engel/Getty Images)

Let's be real, there was only one option here.

While Trout may have peers in some individual seasons, his real peers are Babe Ruth, Barry Bonds, Ted Williams, Alex Rodriguez, Hank Aaron and Willie Mays. He has a legitimate chance to be considered the greatest player of all time at the conclusion of his career if he stays on this pace. 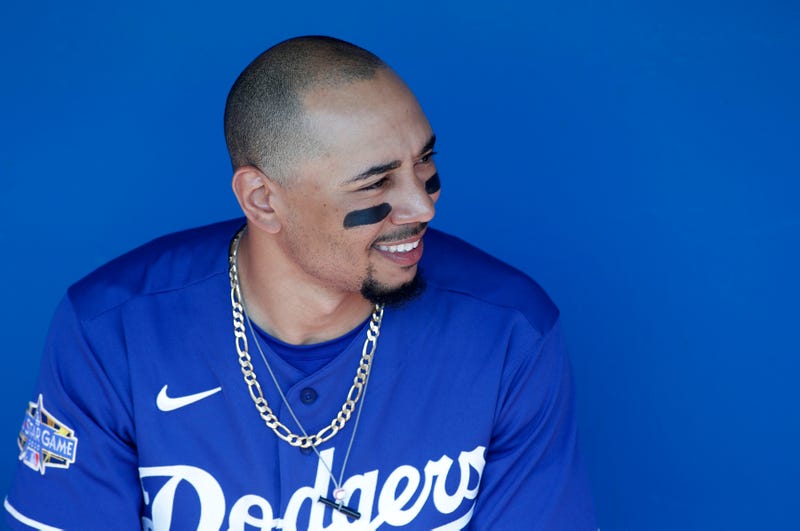 It's laughable that 2019 felt like a down season for Betts. In what proved to be his final season with the Boston Red Sox, Betts slashed .295/.391/.524 with 29 home runs, 80 RBIs, 97 walks and a 6.6 fWAR. For most, that would be a career year For Betts, it felt underwhelming a year after he posted an unfathomable 10.4 fWAR en route to winning the American League MVP.

If Mike Trout has any peers, Betts may be the closest thing. As the 27-year-old prepares for his first season with the Dodgers, he's already a four-time All-Star, four-time Gold Glove Award winner and a World Champion. Wherever Betts' long-term future proves to be at, he seems destined for Cooperstown.

Certainly, there are other names worth considering here. Betts' new teammate, Cody Bellinger, won the National League MVP while playing right field a season ago. If not for breaking his kneecap in early September, Christian Yelich may have repeated as the winner of the award. Bryce Harper is a six-time All-Star and former National League MVP that's only 27. George Springer is a former World Series MVP. When healthy, Aaron Judge is about as imposing of a hitter as there is in the game. Ultimately, though, Betts takes this spot with relative ease. 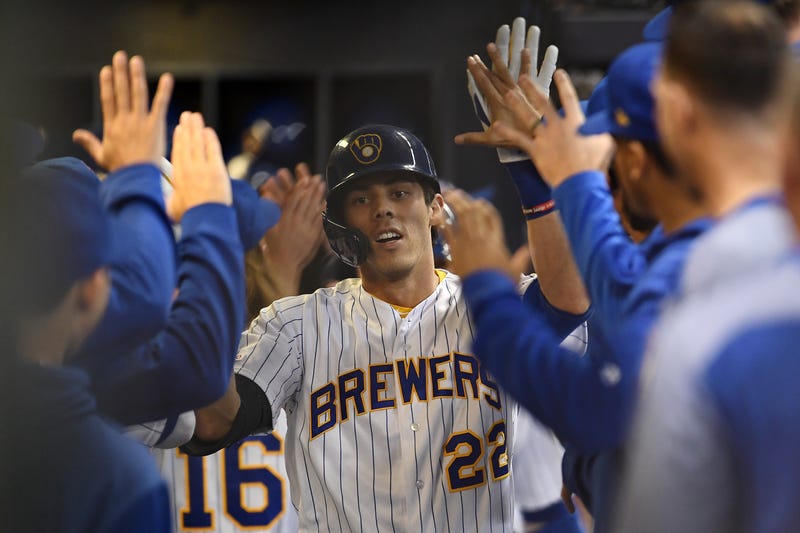 Given that it appears that the DH may become universal in the next collective bargaining agreement, it feels worth treating it as such for our purposes.

While Cody Bellinger and Ronald Acuna Jr. are perhaps more valuable overall offensive players when you consider their versatility defensively, that become a moot point at DH. You could make the case that your best overall lineup would be with one of those two in left field and Juan Soto at DH, but we're not sure we agree.

Yelich may be a replacement level defender, but he's been anything but as an offensive performer since joining the Brewers. Over the past two seasons, Yelich has slashed .327/.415/.631 with 80 home runs, 207 RBIs and 52 stolen bases. Imagine having a DH that's a legitimate basestealing threat. In any event, FanGraphs says that Yelich, the 2018 National League MVP, has been the fourth most valuable offensive player at any position over the past two seasons, which makes the 28-year-old the pick here.