Not like Trout will maybe one day crack a list like this, like he has a very real chance to eventually be in the top three on this list. Through the first nine seasons of his illustrious career, Trout has slashed .305/.419/.581 with 285 home runs, 752 RBIs, a 1.000 OPS and a 71.4 offensive WAR. Despite being just 28 years old, Trout is already a three-time MVP and a pretty sure bet to one day be elected to Cooperstown.

Still, simply having a Hall of Fame resume wasn't enough to crack this list. Joe DiMaggio, Ricky Henderson, Frank Thomas, Nap Lajoie, Edgar Martinez and Craig Biggio were among the Hall of Famers that fell short of cracking this exclusive list. So, for now, so does Trout, even though he's probably only a year or two away from forcing his way onto the list, which will likely just be him scratching the surface.

Below are the 10 greatest right-handed hitters in MLB history, as determined by RADIO.COM Sports: 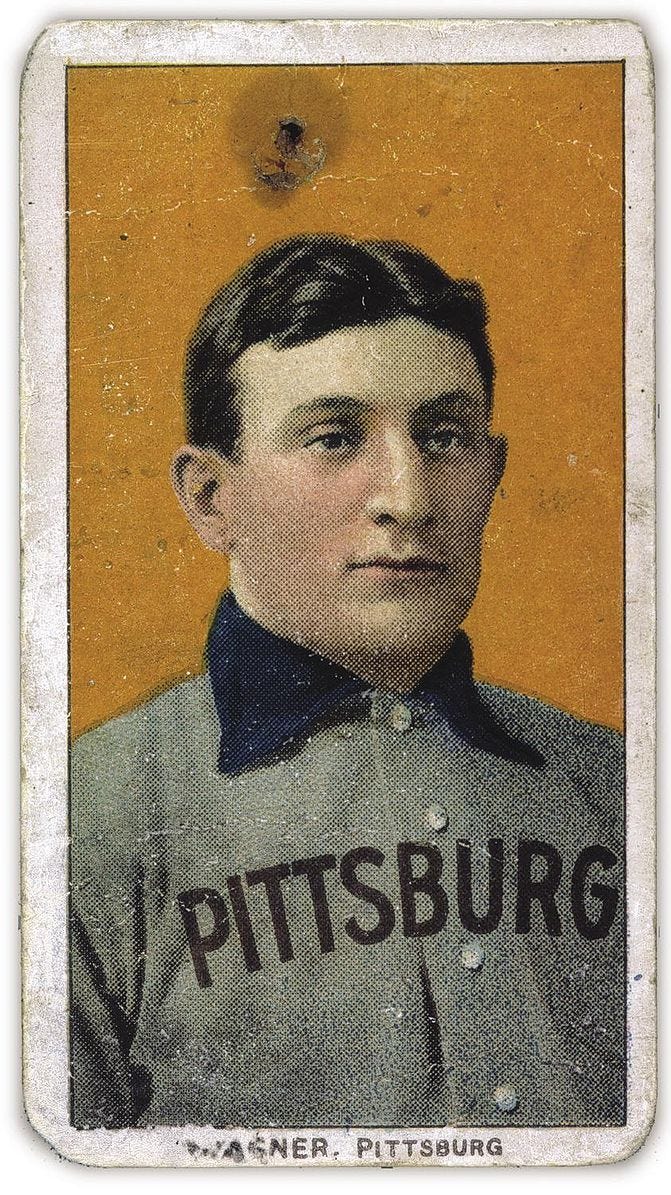 Honus Wagner is the face of the most valuable baseball card ever. Photo credit (Wikimedia Commons)

Wagner is most famous for being the face of the most iconic baseball card ever, but putting him in that box does a disservice to his legacy. While his contact numbers stand out the most, Wagner hit 101 career home runs in an era where that was a ton. It leads you to think that if he had played 20 years later, he could have hit a significant amount of home runs, as the sport changed and the long-ball became more prevalent. It's perhaps difficult to compare him to someone that hit 500 or 600 home runs, but a dumbed-down way of thinking of him is that offensively he was essentially a better version of Hall of Famer Derek Jeter, which is meant as a significant compliment. 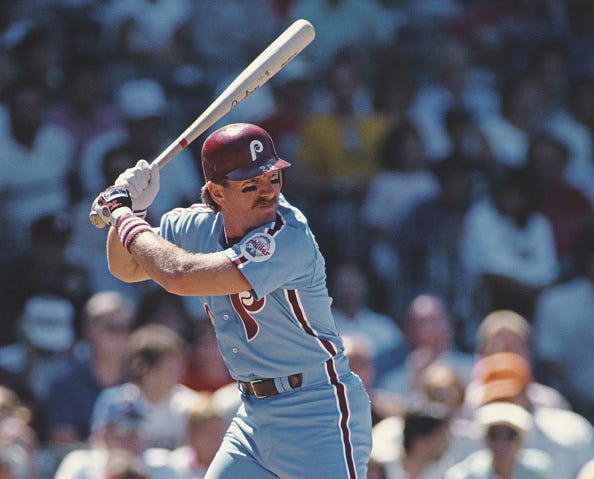 Not only is Schmidt the greatest player in Phillies' history, but he is considered by most to be the greatest third baseman that the sport has ever seen. The only player on this list to spend his entire career with one organization, Schmidt hit 35 or more home runs in a season 11 times during his 18-year career. A three-time National League MVP, Schmidt is 16th in MLB history with 548 home runs and was inducted into the Baseball Hall of Fame in 1995. 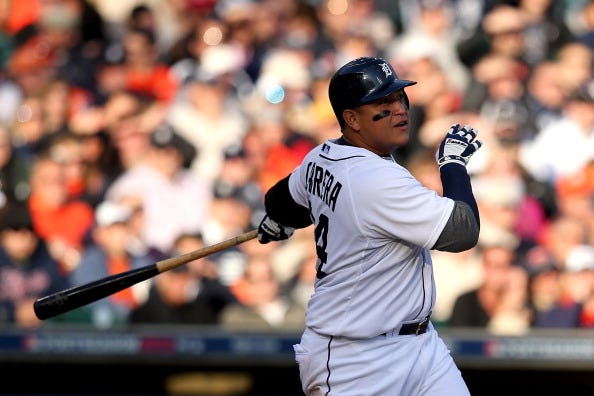 Miguel Cabrera is one of the most feared hitters in MLB history. Photo credit (Jonathan Daniel/Getty Images)

Though his career projects to end with some lean seasons, peak-Cabrera was one of the most dominant offensive forces that the game has ever seen. Cabrera edged out Mike Trout to win back-to-back American League MVPs in 2012 and 2013. In 2013, Cabrera became the first player to win baseball's Triple Crown since Carl Yastrzemski in 1967. When his career ends, there's a spot waiting in Cooperstown for Cabrera, who should receive 100 percent of the vote in his first year of Hall of Fame eligibility. 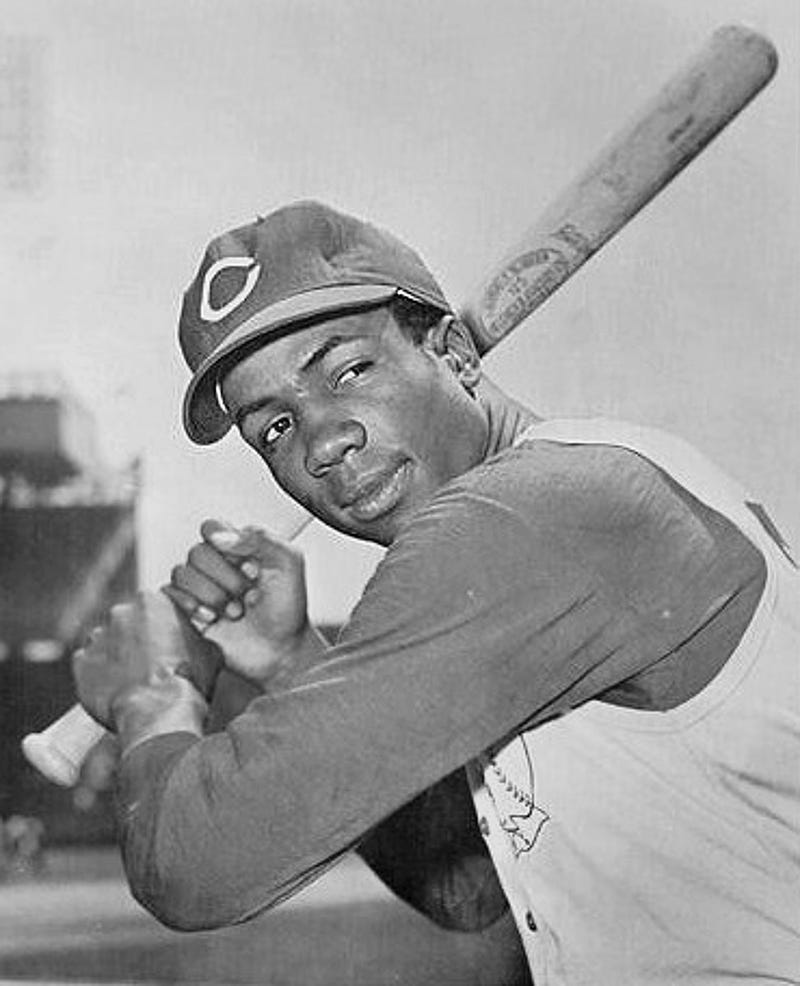 It's not hyperbole to say that Robinson was one of the most important figures in MLB history. He was a trailblazer in the sport in the sense that he was one of the first African-American superstar players and ended up being the first Black manager in the history of the league. Independent of the tremendous impact he had on the fight for racial equality, Robinson was simply one of the most dominant players that's ever picked up a bat. He's the only player in the history of the league to win both an American League and National League MVP Award. He was a 14-time All-Star. He's 10th in league history with 586 home runs. He won a batting title. He won the Triple Crown in 1966. It's hard to think of anything that Robinson didn't accomplish on a baseball field. 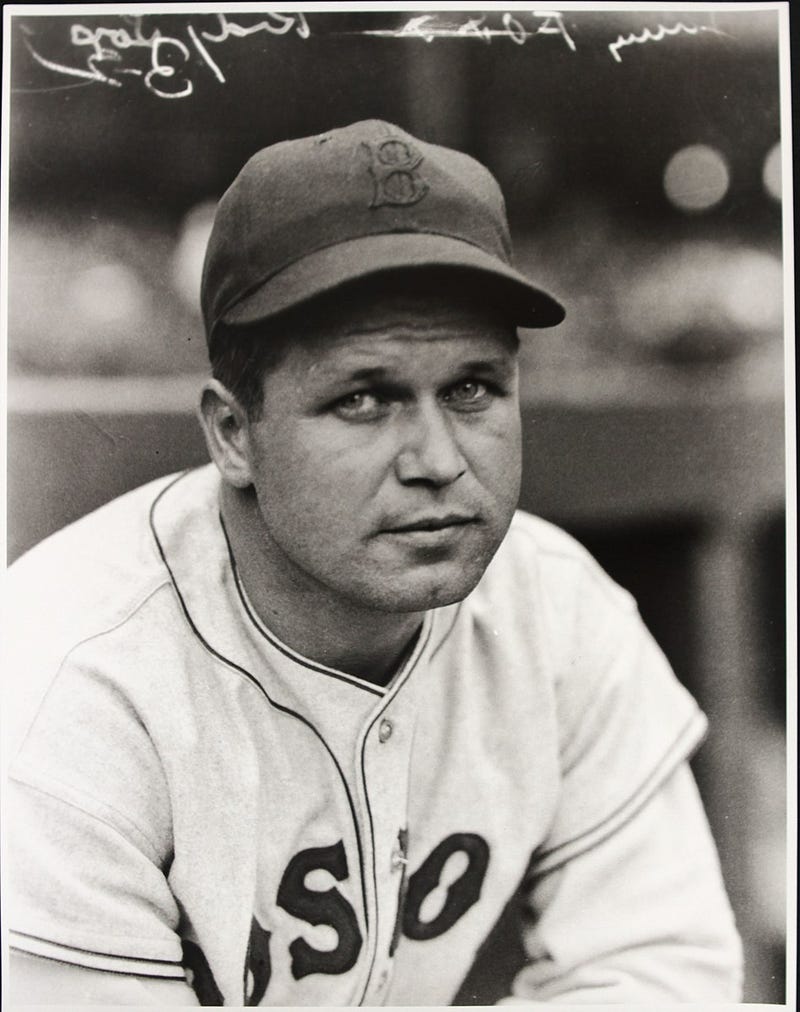 Jimmie Foxx is one of the greatest hitters baseball has ever seen. Photo credit (Charles M. Conlon/Wikimedia Commons)

Foxx was a superstar for Connie Mack's 1929 World Series Champion Philadelphia Athletics, who won 104 regular season games and ultimately the World Series title. Foxx, who debuted for the A's when he was just 17 years old, spent 11 seasons with the club, winning a batting title and two American League MVPs. He also had an extremely successful five-and-a-half season stint with the Boston Red Sox, winning the American League MVP in 1938 and making the All-Star team every season he played for the organization. As you can seen from his staggeringly impressive offensive stats above, he was one of the most complete hitters in baseball history. 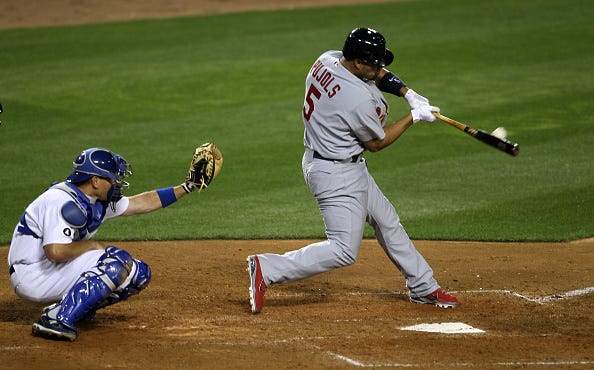 Hopefully his underwhelming stint with the Los Angeles Angels hasn't made you forget just how great Pujols was during his time with the Cardinals. Between 2001 and 2011, Pujols hit .328 with 445 home runs, 1,329 RBIs and an 81.3 fWAR. Though a shortened 2020 season may ultimately keep him from joining the 700-Home Run Club, Pujols is on the doorstep of joining the top five in terms of the career home run leaders in baseball history. 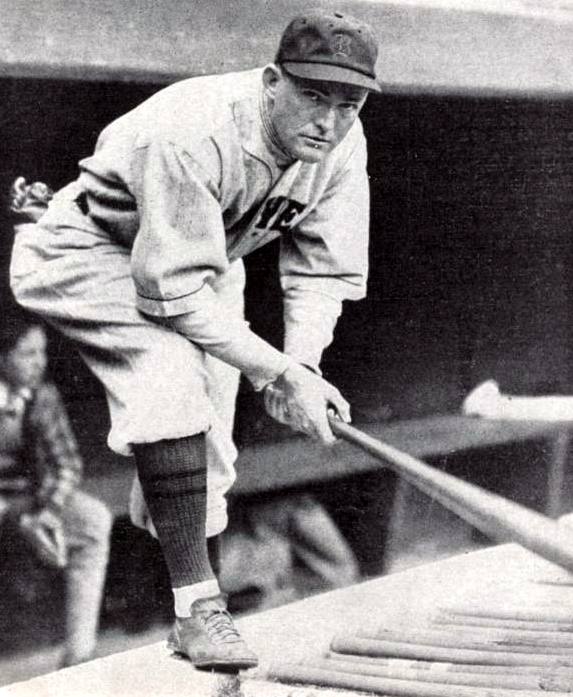 Hornsby is one of the most interesting players in baseball history, because between 1916 and 1920, he was an extremely productive offensive player, but hit just 36 home runs over his first five full seasons. However, as Babe Ruth popularized hitting the longball, Hornsby adapted. Between 1921 and 1929, Hornsby averaged over 28 home runs per season, while continuing to put on a clinic hitting for contact and driving runs in. With some players, we're left to wonder if they would have been as successful if they didn't play in the Deadball Era. Hornsby was a very good player at the tail-end of it, and became one of the best hitters in MLB history once power became more prevalent. 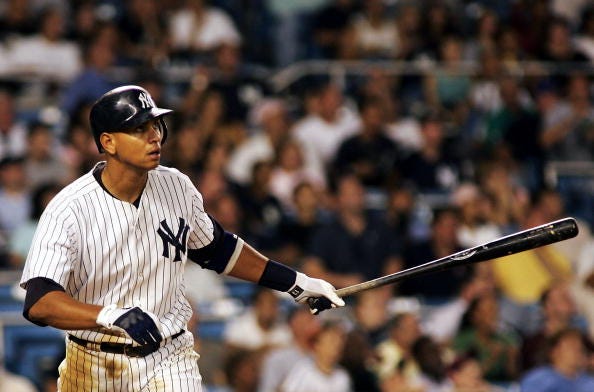 Baseball has a long history of players connected with various different performance-enhancers, though Rodriguez is certainly the person on this list with the most blatant violations. He's admitted to using PEDs from 2001-2003 with the Texas Rangers, arguably the finest three-season stretch of his career. He was suspended by the league for the entirety of the 2014 season because of his connections in the Biogenesis Scandal. It would be malpractice not to mention that, just as it would be wrong not to note that the use of PEDs didn't start or end with the Steroid Era, it was just at its most prevalent. If you simply go off of his numbers, A-Rod is one of the greatest players in the history of the sport. He's a 14-time All-Star, three-time American League MVP and is fourth in MLB history with 696 career home runs. 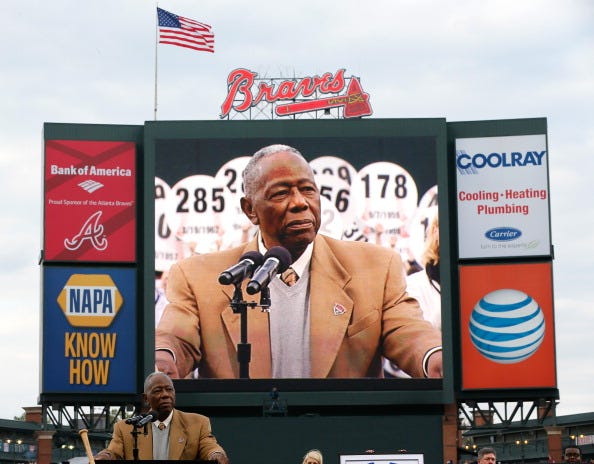 Aaron was the model of consistent greatness. His first 40-home run season came when he was 23. His last came when he was 39. Despite never hitting 50 home runs in a single season, Aaron was baseball's Home Run King from April of 1974 until August of 2007, when Barry Bonds surpassed him. Aaron was far from just a home run hitter, though. He led baseball in hits twice, runs scored three times and won two batting titles. 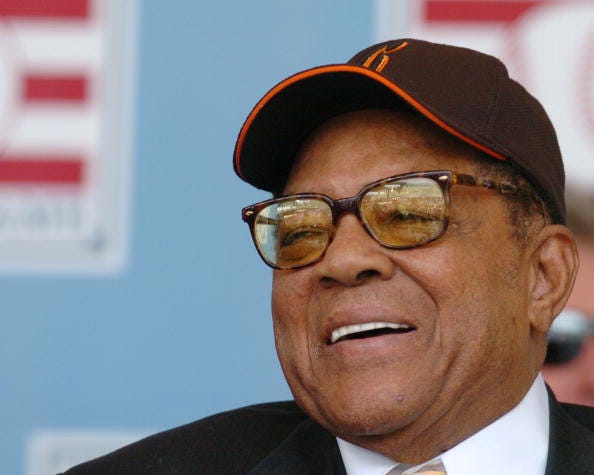 Willie Mays is considered one of the greatest players in MLB history. Photo credit (A. Messerschmidt/Getty Images)

When you factor in his defensive prowess, there's a legitimate case to be made the Mays is the most well-rounded player to ever step on a baseball diamond. After missing the 1953 season because of his military service, Mays returned to the New York *baseball* Giants in 1954 and won the batting title, while also launching 41 home runs. That was the start of a legendary peak for the "Say Hey Kid." Mays led baseball in runs scored, home runs, triples, stolen bases, on-base percentage, slugging percentage, OPS and OPS+ multiple times during his illustrious 22-season career.