In their final few years of existence, the Montreal Expos might not have had a television contract or a up-to-date MLB stadium, but they had arguably the best uniforms in the sport.

Vladimir Guerrero Sr. was the final superstar talent to don the team's pinstriped home jersey that read "Expos" across the chest, and the team's grey road jerseys that said "Montreal" on the front and struck the perfect balance of uniqueness and simplicity. Oh, and the team's blue hats featured arguably the greatest primary logo in MLB history, a red, white and blue "M" that subtly featured an "e" on the logo in red.

Certainly, the Washington Nationals - who the Expos became in 2005 - have vastly improved their look since their inaugural season. In fact, the alternate navy blue jersey with "Nationals" written sideways on the front of the jerseys that the team wore when they clinched their first World Series title last season is probably the team's best look yet. Still, the Nationals have never looked better than they did on July 3, 2019, when they wore the Expos' powder blue throwback jerseys.

While we wait and hope that the Expos eventually return - or at least that the Nationals more regularly wear their throwbacks - here are the top 10 jerseys in the MLB currently: 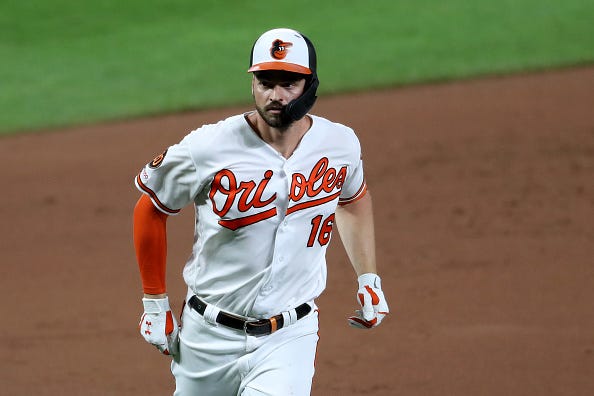 The smartest thing that the Orioles ever did was ditch the bland, more realistic Oriole logo they wore on their hats from 1989 to 2011 and return to the more cartoonish bird. Though some think it looks like a cereal brand mascot, that's not necessarily a bad thing, especially when the Orioles are the only MLB team that's really mastered a three-colored hat.

The three-colored hat - shown above by Trey Mancini - avoids looking like a high school hat and is worn with the team's home jerseys and the aforementioned orange alternates. With the team's black alternate jerseys, they rock another aesthetically-pleasing hat, a black one with an orange bill that just reads "O's." 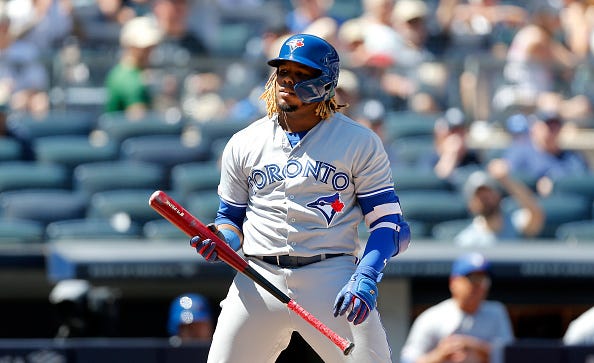 It's funny, Hall of Famer Roy Halladay is arguably the greatest player in the history of the Blue Jays' franchise, but he played during a period where the team was experimenting with looks that didn't ultimately age well. Smartly, the team return to a more classic look in 2012.

As Vladimir Guerrero Jr. shows above, the Blue Jays have tremendous road jerseys to pair with a white home jersey and alternate solid blue jersey that are essentially the same as the road jerseys just with a different primary color. The font that the team uses for the "Toronto" or "Blue Jays" on the front of their jerseys - and the numbering on the back of the jerseys - is probably the best font in the sport.

The Blue Jays look the best when they keep their uniforms simple. This past offseason, they introduced a powder blue alternate jersey that keeps the team's primary blue hat but adds a powder blue brim. This just in, light blue on dark blue is too much. Powder blue throwbacks have become extremely popular in recent years, but the Blue Jays probably should have sat this trend out and perhaps they'd be higher on the list. 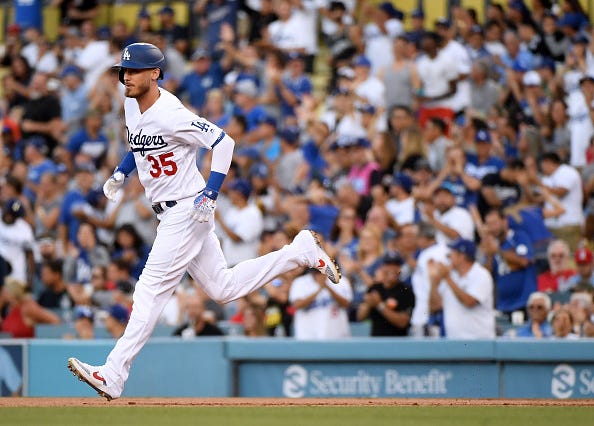 It perhaps sounded strange for the Dodgers to use red numbers on the front of their jerseys, but there's a great story behind it and it looks much better than it sounds.

The Dodgers' home jerseys feature the team's name written in cursive on a white jersey. There's also an alternate Dodgers' jersey that utilizes the exact same format on a grey road jersey. However, while longer city names can look crowded on the front of a jersey - there's a reason the Phillies don't have jerseys that say "Philadelphia" - the team's primary road jerseys say "Los Angeles" in a smaller font and are a good look.

On top of the jerseys, the Dodgers moved to a matte batting helmet - modeled above by Cody Bellinger - in 2016 and it's been a massive upgrade from their previous helmet, even without the concept of the logo on a Dodger blue helmet changing. Over 10 MLB teams have matte helmets, but the Dodgers may have the best one. 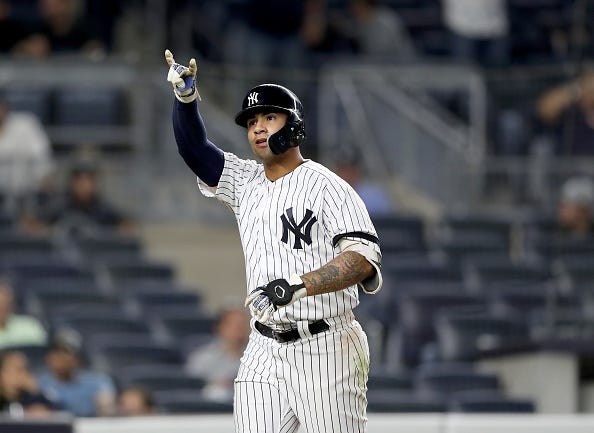 There's no doubt that the Yankees could probably develop a strong alternate jersey, but props to them for not doing so and sticking with just two iconic uniforms.

Many teams have pinstriped homed jerseys across sports, but the Yankees are the team most associated win pinstripes because Babe Ruth, Joe DiMaggio, Mickey Mantle, Lou Gehrig, Roger Maris, Mariano Rivera, Roger Clemens, Derek Jeter and Alex Rodriguez have all worn these pinstripes.

For as celebrated as the pinstripes are, the team's grey road uniforms may be an even better look. They are simple - they say "New York" across the chest and, like the home jerseys, don't feature player names on the back of the jerseys - in a very good way. 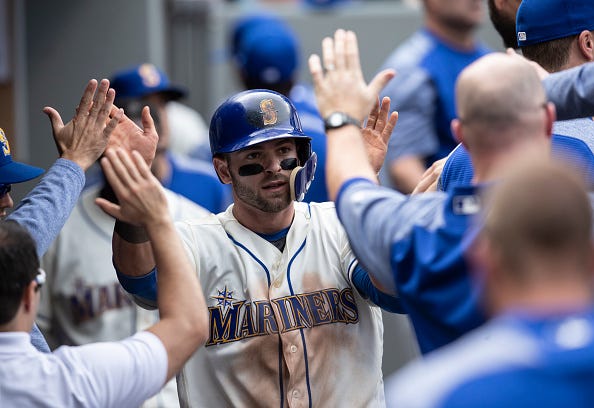 Perhaps this is a controversial opinion, but since the Montreal Expos became the Washington Nationals, the Mariners have filled the void with the strongest hat logo. An elite logo, mixed with a strong mix of uniform options, is why the Mariners find themselves higher on this countdown than some others.

Make no mistake, the team's white home jerseys are a good look, but two of their other alternate jerseys really stand out. The team's Sunday look is modeled above, and it features an impressive cream jersey with a blue hat and lettering. And while the team's aqua green alternate - which is paired with a hat that has an aqua green brim - may be too much for some, it was graded well here. 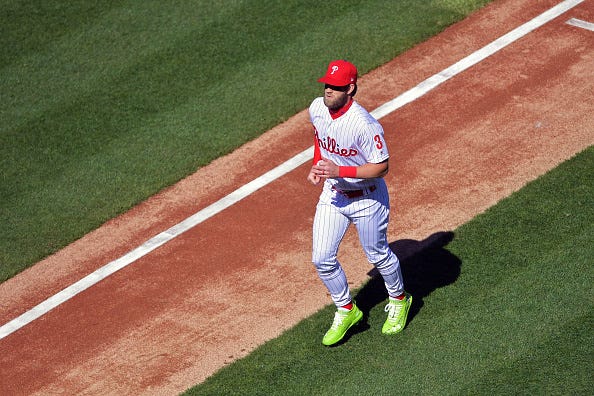 Like the Yankees, the Phillies have a pinstriped home jersey and grey road jersey. What sets them apart from the Bronx Bombers are two strong alternate jerseys.

In 2008 - when the team would win their second World Series title - the Phillies introduced a cream alternate uniform that pays homage to team's primary look in the 1940s. The cream jerseys - which come with a solid blue hat that features a red "P" and brim - are worn for all home games that are played during the day at Citizens Bank Park, expect for on Thursdays.

Since the 2018 season, the Phillies have worn their powder blue throwback jerseys for all Thursday games played at Citizens Bank Park. Though some historians aren't keen on wearing what was the team's primary road jersey from 1973-1988 at home, most fans now associate it with the walk-off grand slam that Bryce Harper hit last August. 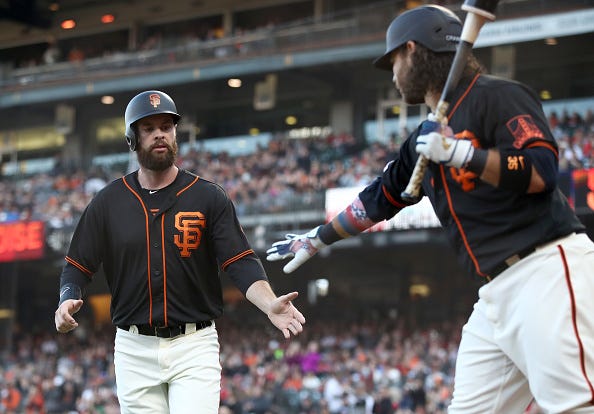 The Giants' road jerseys are pretty forgettable, but their other three uniform combinations are so strong that they were propelled them into the top five.

The team's cream primary home jerseys - which really pop under the summer sun at Oracle Park - are associated with a variety of Barry Bonds' record-breaking home runs, including No. 756. It's possible that the jersey - which is essentially the same one that Willie Mays, Willie McCovey and Will Clark all wore during their careers - is viewed as iconic partially because of the superstars and Hall of Famers who have worn it. So be it.

Additionally, the Giants have two excellent alternate jerseys, both of which look tremendous under the lights. Bonds broke the single-season home run record in 2001 while wearing a black and orange jersey that read "Giants" across the chest. The team has upgraded the jersey since, just using their primary logo on the left side of the chest. The black jerseys are arguably the best alternate jerseys in baseball. And while the Houston Astros and Miami Marlins have swung and missed with bright orange jerseys, the Giants have nailed their bright orange alternates, which, like the black jerseys, feature a black cap with an orange bill. 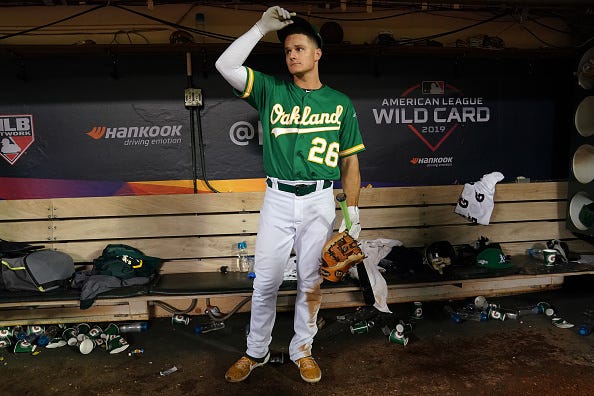 The A's may have lost in the American League Wild Card Game for the second consecutive season in 2019, but they sure looked good while doing so.

The team donned their kelly green alternate jerseys, which are part of a uniform set that features two other alternates - a yellow jersey top and a dark green jersey top. The Athletics' home white jerseys and road grey jerseys also earn high marks.

What stands out the most about the uniforms of the A's? The elephant logo that's featured on the left sleeve of each jersey. The story of how an elephant became an alternate logo for the A's - which dates back to the team's time in Philadelphia - is one all baseball fans should know. 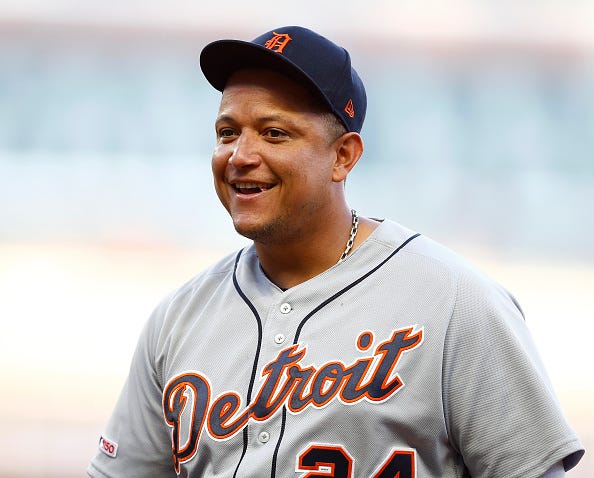 With all due respect to the Yankees and Dodgers, the Tigers have the most classic uniform set.

There's not a ton that's similar about the Tigers' home and road jerseys, and yet they pair together perfectly. So perfectly, that as Paul Lukas of UniWatch notes, they are just one of two teams that doesn't have an alternate jersey.

The Tigers have a white home jersey that's very simple, it just features a navy blue hat with a white version of their iconic logo that matches the logo on the left side of the chest of the jerseys. Detroit's road jerseys really stand out, however. As Miguel Cabrera demonstrates above, they grey jerseys feature navy blue font with orange trim for both "Detroit" and the numbering on the jersey. That goes perfectly with the navy blue hat that utilizes an orange version of the same logo that's on the home hats. 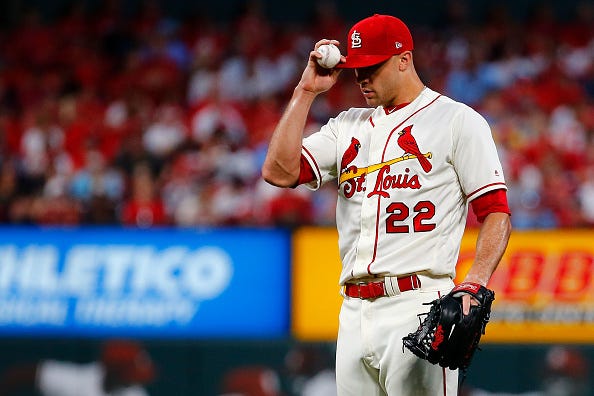 There's nothing especially original about a white home jersey, grey road jersey, cream alternate and powder blue throwback, which is the Cardinals' uniform repertoire. The Cardinals have just managed to master a mix that so many other teams have tried.

A bunch of teams have cream alternates, but as RHP Jack Flaherty shows above, the Cardinals may have the best one. The same goes for their road grey and powder blue throwbacks. As noted above, we're fans of the Phillies' current uniform set, which also features grey road grey jerseys, a cream alternate and a powder blue throwback uniform. But from here, the Cardinals comfortably top another elite uniform with their take on all three looks.

The Cardinals' traditional red hats are a strong look, and they've managed to successfully integrate an alternate navy blue hat that features a Cardinal sitting on a bat with a red brim. There's no reason for the Cardinals to ever change their current uniform mix.