In November of 2014, the normally low-budget Miami Marlins inked 25-year-old slugger Giancarlo Stanton to what was a record extension at the time, guaranteeing him $325 million over 13 seasons with a full no-trade clause. Stanton, now a New York Yankee, can opt out of the final seven seasons of his contract after the 2020 season, though it appears overwhelmingly unlikely he'll do that.

That said, injuries limited Stanton to just 18 regular season games in 2019. His contract - at least if the Yankees were intent on staying under the luxury tax threshold - certainly played into the team's decision not to seriously pursue Bryce Harper or Manny Machado prior to the 2019 season. And if he declines in the second half of his deal, it will be fair to question whether the pay-off in the front-half of the deal was worth what may be some very lean years at the deal's conclusion.

While there are legitimate concerns about how the remaining eight years of Stanton's deal will play out, it didn't crack the worst deals of the decade. Frankly, it wasn't even among the deals like Pablo Sandoval that just missed out on the the list. Here are the nine worst MLB contracts of the 2010s: 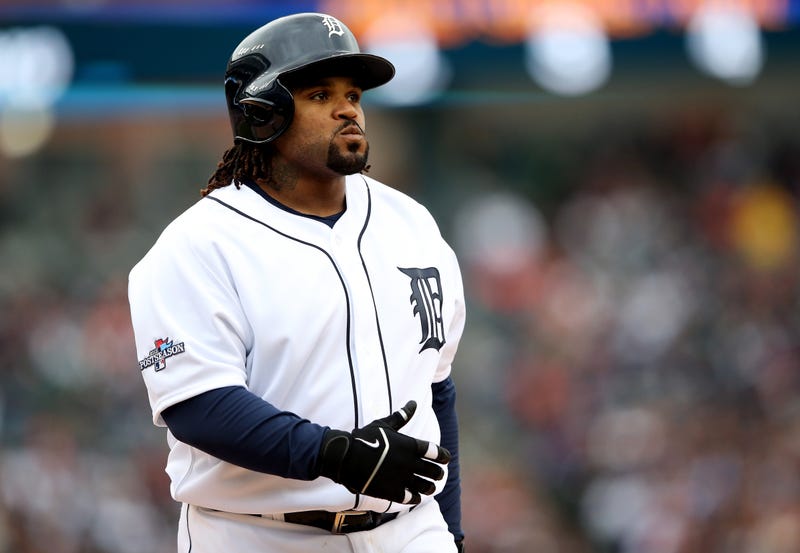 Ahead of the 2012 season, the Detroit Tigers signed power-hitting first baseman Prince Fielder to a nine-year/$214 million deal in free agency. For a season, the deal worked out swimmingly.

In his first season with the Tigers, Fielder hit .313 with 30 home runs, 108 RBIs and 85 walks. Miguel Cabrera benefitted so much from hitting in front of Fielder that he became the first player since Hall of Famer Carl Yastrzemski in 1967 to win the Triple Crown. A stacked Tigers team that also included Justin Verlander, Max Scherzer, Rick Porcello, Doug Fister and Austin Jackson won the 2012 American League pennant.

That said, with concerns about how the Fielder deal would age, the Tigers traded Fielder and $30 million to the Texas Rangers for star second baseman Ian Kinsler after the 2013 season.

By August of 2016, Fielder's career was over, as neck injuries forced him to walk away from the game. He did hit .305 and make an All-Star team for the Rangers in 2015, though it's safe to say they'd like a mulligan on trading Kinsler, one of the best players in the history of their franchise, for the bulk of Fielder's contract. Fielder's deal hasn't crippled the team, but he last played in a major league game in July of 2016, and he's still going to make $9 million in 2020, the final season of his contract. 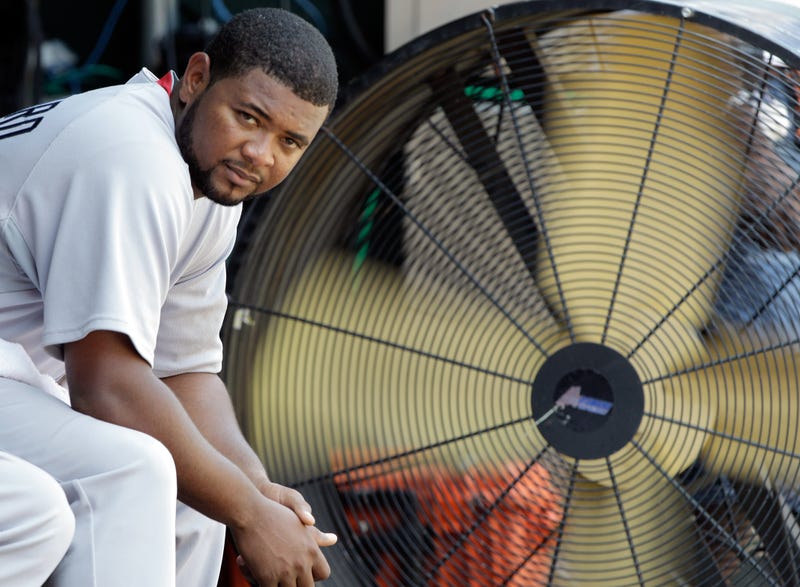 If Carl Crawford isn't the greatest Tampa Bay (Devil?) Ray of all-time, he's on the short list. In 2010, his last season in Tampa Bay, Crawford was an American League All-Star, while winning both the Gold Glove Award and Silver Slugger Award for American League left fielders.

His success in Tampa Bay earned him a seven-year/$142 million deal with the division-rival Boston Red Sox. While it was hard to spot warning signs at the time of the signing, the deal didn't play out well.

Crawford hit just .255 in 2011 for the Red Sox, and posted -1 defensive runs saved in his first season manning Fenway Park, which is one of the more difficult outfields to navigate. Crawford was part of a Red Sox team that collapsed in September, going just 7-20, which led to the dismissal of manager Terry Francona.

The Red Sox had to package Crawford with Adrian Gonzalez - one of the best hitters in the game at that time - and Josh Beckett to rid themselves of his deal in a trade with the Los Angeles Dodgers in August of 2012.

Ultimately, the Dodgers released Crawford in June of 2016, as they deemed him no longer one of their five best options in the outfield, despite him still being under contract through 2017. 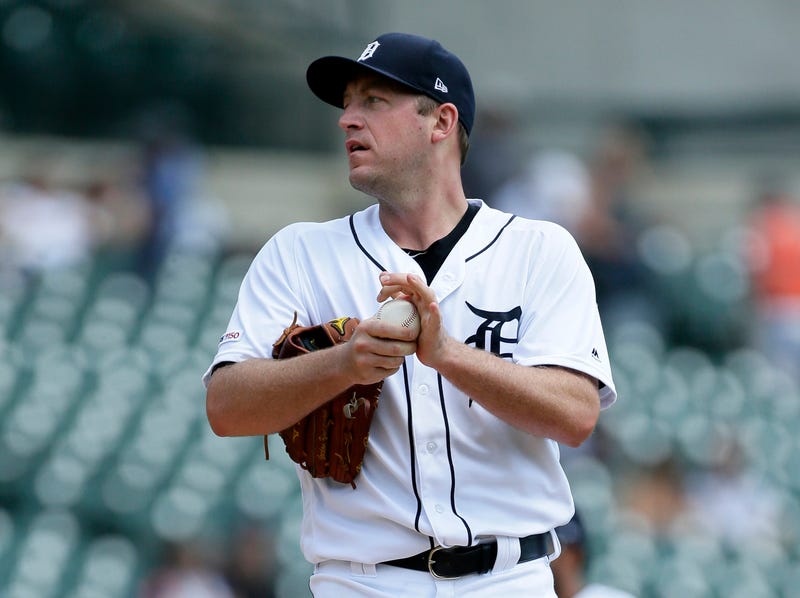 Between 2013 and 2015, Jordan Zimmerman logged 614.2 innings for the Washington Nationals, posting a 3.19 ERA. FanGraphs says that for that three-season stretch, Zimmerman was the 12th-best pitcher in all of baseball.

So while the Tigers issuing Zimmerman a five-year deal before his age-30 season seemed strange given the state of their franchise, there wasn't a ton of evidence to say that the deal would be an unmitigated disaster.

But it has been.

In the first four seasons of the deal, Zimmerman has posted a 5.61 ERA. He's done so for a Tigers team that's gone 261-385 over that stretch, which makes you wonder why general manager Al Avila thought the Tigers were a fit for Zimmerman to begin with when it was clear a rebuild was on the horizon.

Notably, the Tigers let Max Scherzer - who won the 2013 American League Cy Young Award while pitching for the team - walk after the 2014 season. He signed a seven-year/$210 million deal with the Washington Nationals that's going to go down as one of the greatest free agent contracts in baseball history.

Meanwhile, a year later, after Avila was promoted to replace Dave Dombrowski as general manager, the Tigers gave $110 million to Zimmerman, a teammate of Scherzer's in D.C. in 2015, in what history will view as one of the worst contracts ever issued to a pitcher. 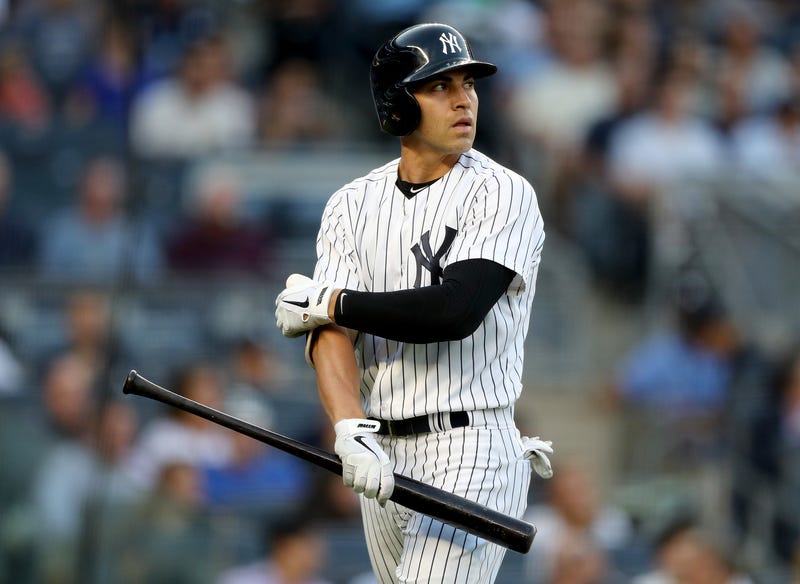 Jacoby Ellsbury was released by the Yankees before his contract concluded. Photo credit (Elsa/Getty Images)

That season, especially in terms of power output, proved to be an outlier in Ellsbury's career. But after he stole 52 bases and posted a 4.6 fWAR in 2013, his final season with the Red Sox, the division-rival New York Yankees inked Ellsbury to a seven-year deal in free agency that proved to be one of the worst transactions in franchise history.

Ellsbury actually did steal 39 bases in 2014, a pretty productive first season with the Yankees. But his tenure in the Bronx was marred by injuries, with him missing the entire 2018 and 2019 seasons with on oblique strain, a torn left labrum and plantar fasciitis, among other ailments.

The Yankees ultimately released Ellsbury in November of 2019, choosing to eat the $26 million he was owed in the final season of his deal.

WAR isn't a perfect stat, but the 9.5 fWAR that Ellsbury put up in 2011 is a number that a fair share of Hall of Famers have never reached in an individual season. However, during his entire Yankees tenure, he was worth just 8.1 fWAR. 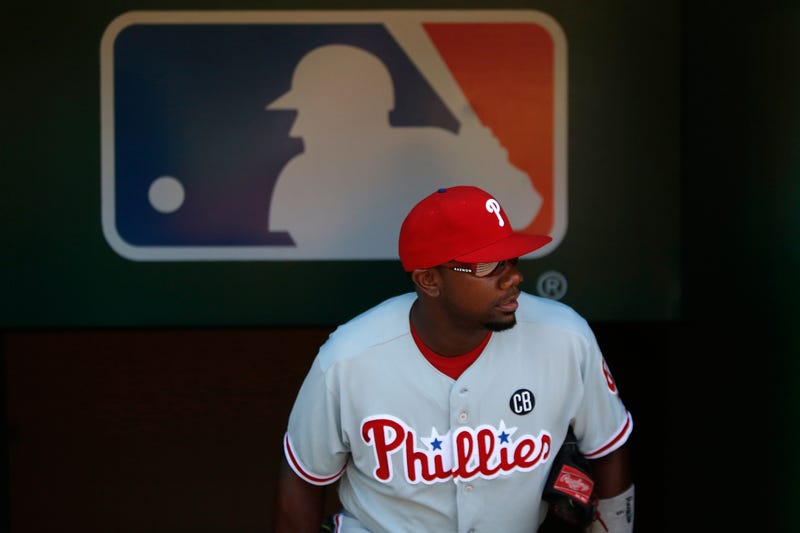 Ryan Howard struggled with injuries at the end of his career. Photo credit (Jonathan Ernst/Getty Images)

At the height of his powers, Ryan Howard was one of the most dominant home run hitters that the game has ever seen. But Howard's five-year/$125 million deal - which coincided with the final five seasons of his major league career - that began in 2012, certainly didn't play out during his prime.

While he still occasionally was good for a majestic home run, Howard hit just .226 and posted a -1.7 fWAR over the final five seasons of his career.

It's legitimate to say that the Phillies couldn't have predicted that Howard would tear his achilles on the final out of Game 5 of the 2011 NLDS. That injury forever altered his career.

That said, the Phillies signed Howard to his five-year contract in April of 2010, nearly two seasons before he could become a free agent. It's often forgotten that Howard signed a three-year/$54 million deal with the Phillies that ran through 2011, buying out his final three arbitration years. So the Phillies unnecessarily rushed a long-term deal with Howard.

Though he still averaged 32 home runs and 112 RBIs between 2010 and 2011, it was evident that he had taken a step back from his offensive peak. Even if the achilles injury hadn't taken place, there was evidence before Howard would have been eligible to become a free agent that the five-year/$125 million deal probably wasn't going to play out well. But the Phillies bid against themselves, negating any chance at pivoting when Howard did ultimately tear his achilles. 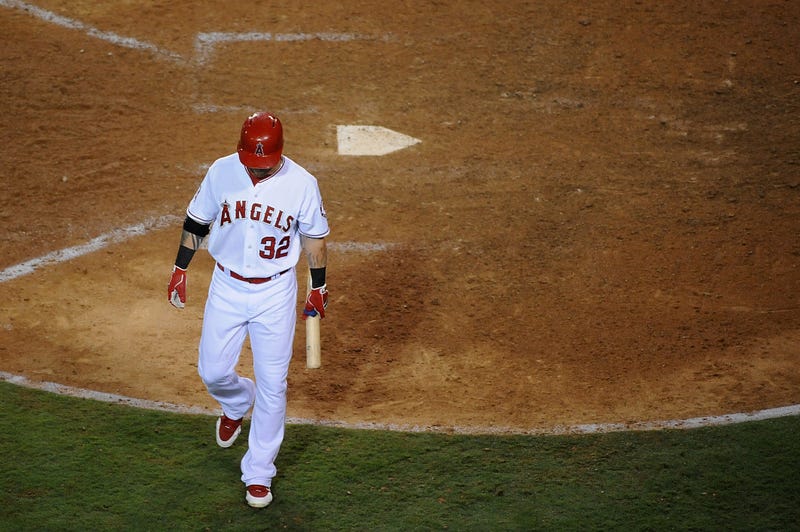 After substance-abuse issues nearly derailed the career of Josh Hamilton, the No. 1 overall pick in the 1999 MLB Draft, he became one of the best stories in baseball history during his five-season stint with the Texas Rangers from 2008-2013. Hamilton made the American League All-Star team five consecutive years, and won the American League MVP in 2010, when he hit .359 with 32 home runs, 100 RBIs and a league-leading 1.044 OPS.

Hamilton became a free agent after the 2012 season, and joined the division-rival Los Angeles Angels on a five-year/$125 million deal that proved to be a disastrous investment.

Despite signing such a lucrative free-agent contract, Hamilton played in just 240 total games for the Angels, hitting just .255 with 31 home runs, which was certainly underwhelming when compared to what he had done with the Rangers.

The Angels became so low on Hamilton that they eventually traded him back to the Rangers - who, again, are a division-rival - and ate the overwhelming majority of money he was still owed to do so. 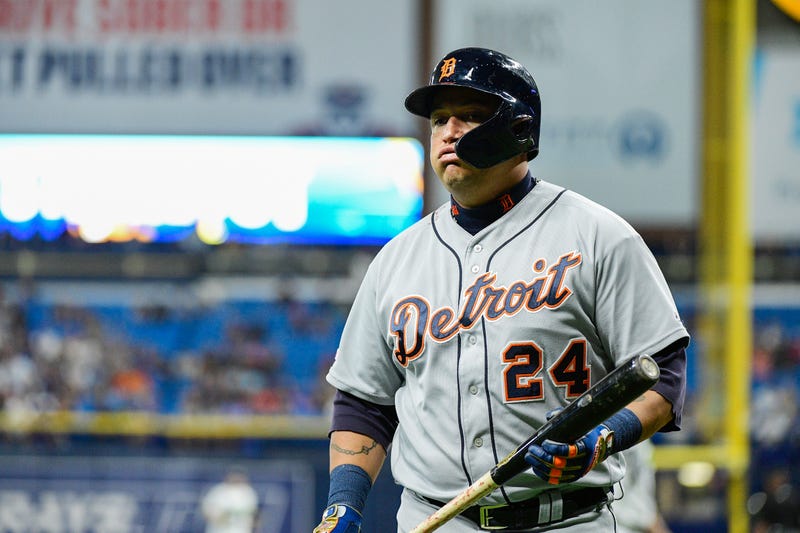 Miguel Cabrera is one of the best right-handed hitters in baseball history and is going to be a first-ballot Hall of Famer.

That said, like the Phillies with Ryan Howard, the Tigers extended Cabrera unnecessarily early, signing him to an eight-year/$240 million extension in March of 2014, even though he couldn't be a free agent until after the conclusion of the 2015 season.

However, from 2017-2019, Cabrera has been sapped of his power, as he's hit just 31 total home runs. After averaging a 5.7 fWAR per season over the course of his first nine seasons in Detroit, Cabrera has been good for just 0.2 fWAR total over the last three seasons.

The most alarming part for the Tigers is they're still on the hook for $124 million through 2023 for Cabrera, and then have $8 million buyouts they will have to pay Cabrera for 2024 and 2025, assuming they don't want to pick up $30 million options for his age-41 and 42 seasons. 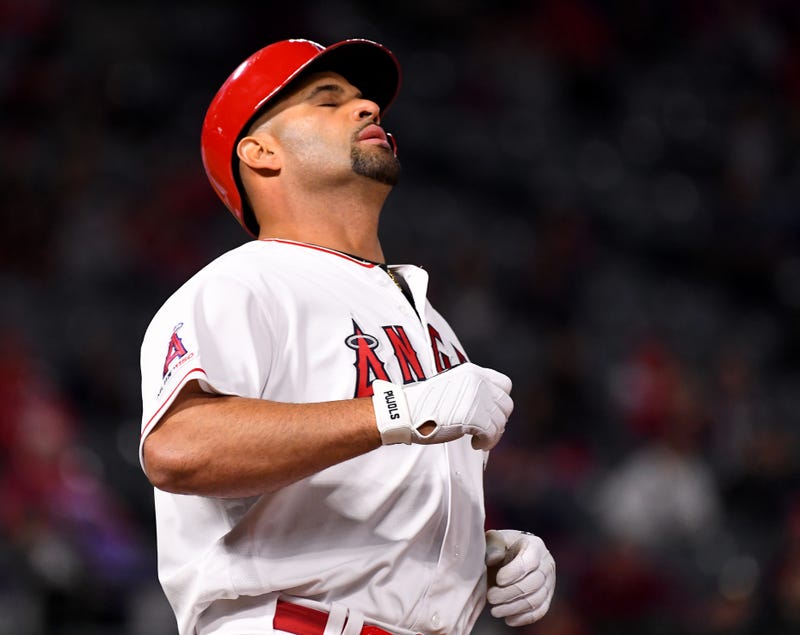 After Albert Pujols led them on an improbable World Series run in 2011, the St. Louis Cardinals were panned for allowing their franchise icon to leave in free agency that winter.

But history has a way of proving smart organizations to be, well, smart.

The 10-year/$240 million deal that Pujols signed with the Halos has turned more into a very expensive way for a team to have him hit all of his milestone home runs in their jersey.

In his first eight seasons with the Angels, Pujols, who had nine All-Star Game appearances in St. Louis, has made just one All-Star team. He's never finished in the top-10 in American League MVP voting. He has just one seasons in Los Angeles where he's topped the 35-home run mark, which came in 2014, when he slugged 40 home runs. Even that year, he hit just .244 and posted a .307 on-base percentage, 72 points below his career average.

Pujols' first season in Los Angeles was 2012, which was also the first full season of Mike Trout's illustrious career. Since the start of the 2012 season, the Angels have made the postseason just once, and still have yet to win a single playoff game (let alone series) in the Trout era. Pujols isn't the singular reason that the Angels haven't been successful from a team standpoint during Trout's career, but the future Hall of Famer's contract certainly hasn't helped the cause. 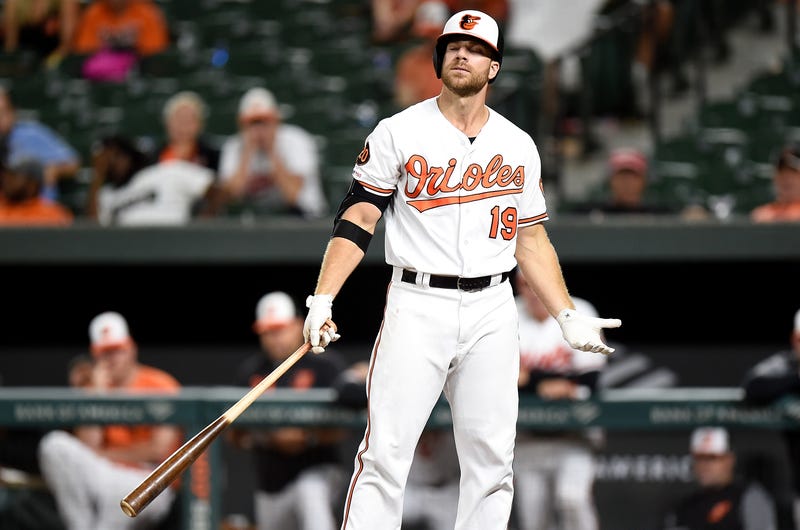 Chris Davis' extension with the Orioles has proven to be a disaster. Photo credit (Greg Fiume/Getty Images)

Suffice to say, the Davis that slugged 159 home runs between 2012 and 2015 hasn't been the same player during his long-term deal.

While Davis did hit 38 home runs in 2016, the first season of the deal, he hit just .221 that year. And that may go on to be the most successful season of the contract.

It would be one thing for a deep-pocketed organization like the New York Yankees or Los Angeles Dodgers to be saddled with this contract. The Orioles aren't that, though. Davis' contract prevented them from being able to mount any sort of serious attempt to retain Manny Machado. And given how he's performed the last three seasons, there's no guarantee he even plays out his contract, which runs through 2022.