The position of shortstop may not be quite as deep as it was during the late 1990s - when Alex Rodriguez, Derek Jeter, Nomar Garciaparra, Omar Vizquel and Barry Larkin were all among the game's best overall players - but there isn't a lack of exciting talents at the position in today's game.

Didi Gregorius, who is hoping for a bounce back in his first season with the Philadelphia Phillies, didn't crack our list of the top 10 shortstops in baseball for the 2020 season. Neither did Chicago White Sox shortstop Tim Anderson, who despite poor fielding metrics is an exciting young star that hit .335 a season ago. Jorge Polanco, who is a major part of a Twins team with World Series aspirations, just missed the list. Ditto for Jonathan Villar, who is now a Miami Marlin.

So with all of these All-Star caliber talents not in the top 10, who topped them? Here's a look at the RADIO.COM Sports top 10 shortstops for the 2020 MLB season: 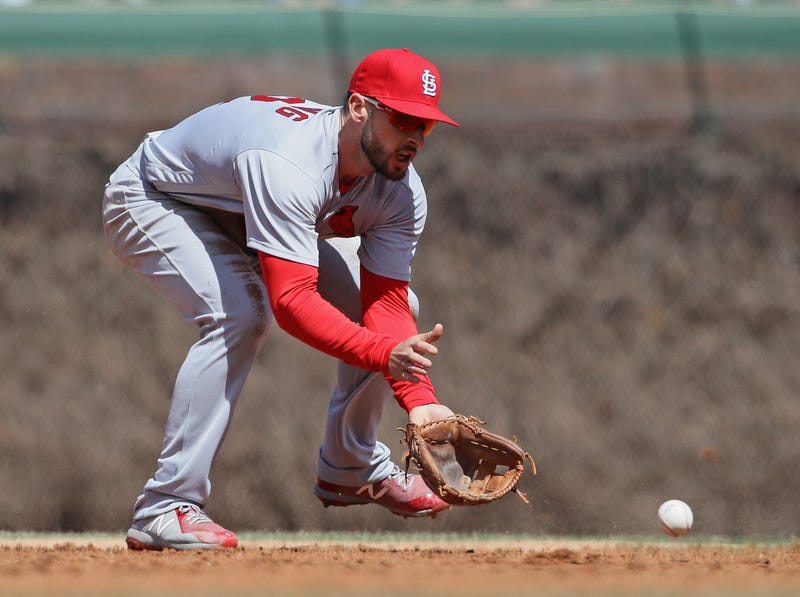 Paul DeJong is one of the game's most underrated stars. Photo credit (Jonathan Daniel/Getty Images)

Despite hitting just .233 a season ago, DeJong was one of the most complete shortstops in baseball, homering 30 times, driving in 78 runs and posting a 4.1 fWAR in his age-25 season.

While he provides pop offensively, DeJong was an All-Star for the first time a season ago thanks in large part to his defensive prowess. In 2019, FanGraphs says that DeJong was the best fielding shortstop in baseball, posting 26 defensive runs saved, which was tied with Chicago Cubs' shortstop Javier Baez for the most at the position.

Though they were ultimately swept by the eventual World Series Champion Washington Nationals, DeJong and the Cardinals did reach the NLCS a season ago. If they are able to make it out of a crowded National League Central, the Cardinals are a team that could potentially make a run in October. 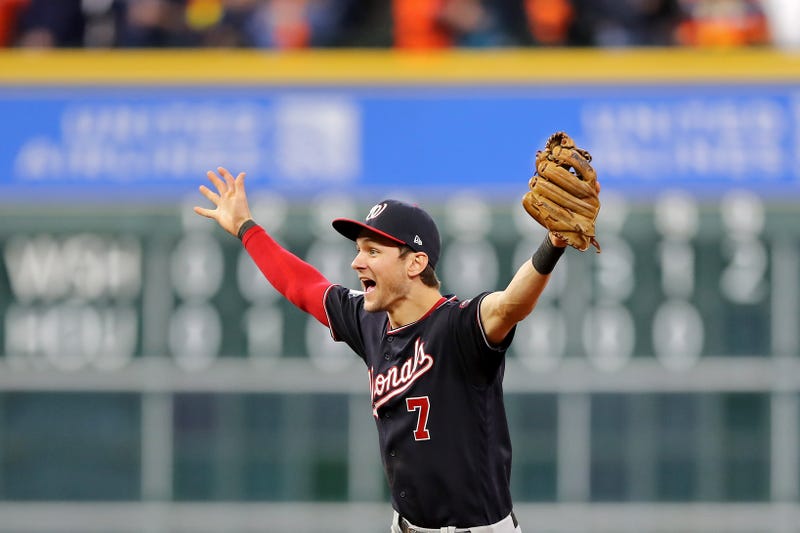 The 26-year-old should be fully healthy entering the 2020 season, which he probably wasn't even when he returned from his finger injury a season ago. To compete in a crowded National League East, the Nationals may need Turner to have his best overall season yet.

Beyond how deep the division that the Nationals play in is, they lost Anthony Rendon, their best overall player a season ago, in free agency this offseason. Turner is part of a group that includes Juan Soto, Victor Robles and Carter Kieboom that the Nationals will need to step up to help make up for the loss of the superstar third baseman. 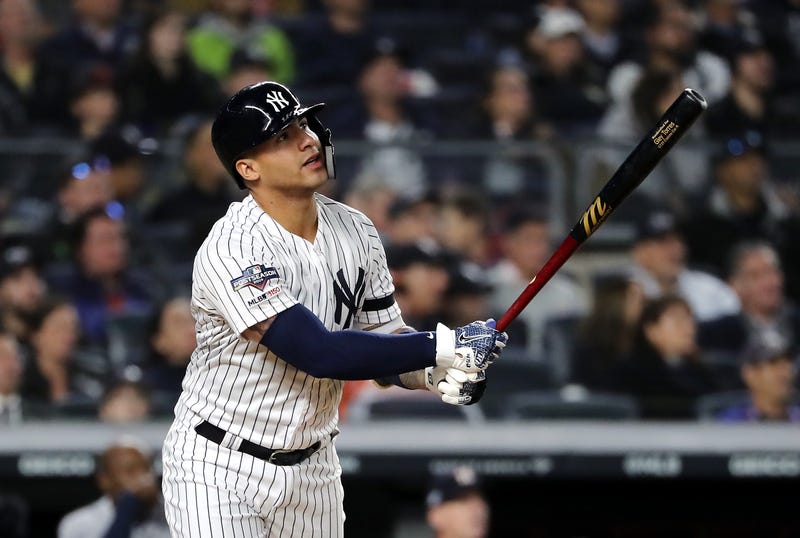 Gleyber Torres was an All-Star in 2019. Photo credit (Elsa/Getty Images)

As Yankees fans like to say, Torres is still only 23. He already has one All-Star Game appearance under his belt and is likely to only get better.

At least to start the season, Aaron Boone's squad may need Torres to carry even more of the workload, with Aaron Judge and Giancarlo Stanton's respective statuses both in doubt for Opening Day. 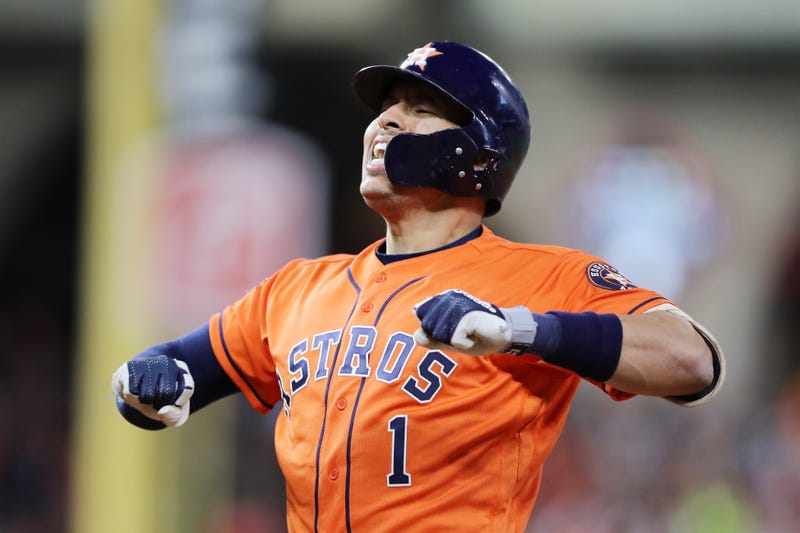 Remember when Correa, the No. 1 overall pick in the 2012 MLB Draft, was compared to Alex Rodriguez as he approached the major league level? That was probably an unfair standard for anyone to be expected to perform at, but it still doesn't feel like we've seen the best of the 25-year-old yet.

A major reason for that may be that of a possible 486 regular season games over the past three seasons, Correa has been limited by injuries to just 294 games. When he's been healthy in his career, Correa has posted elite production, and he still hasn't reached what should be his physical peak. It's just a matter of availability.

Correa issued what seemed like a genuine apology for his role in the Astros' sign-stealing scandal, but that's not going to erase that cheating en route to winning a World Series will hang over the team in 2020, especially when you consider that a large percentage of his teammates haven't seemed remorseful.

But for as difficult of a task as it may be for the Astros to compartmentalize in 2020, Correa still is set to hit in a lineup that also includes George Springer, Jose Altuve, Alex Bregman and Michael Brantley. The idea that this scandal is going to be the end of the Astros' run of success probably isn't especially realistic. 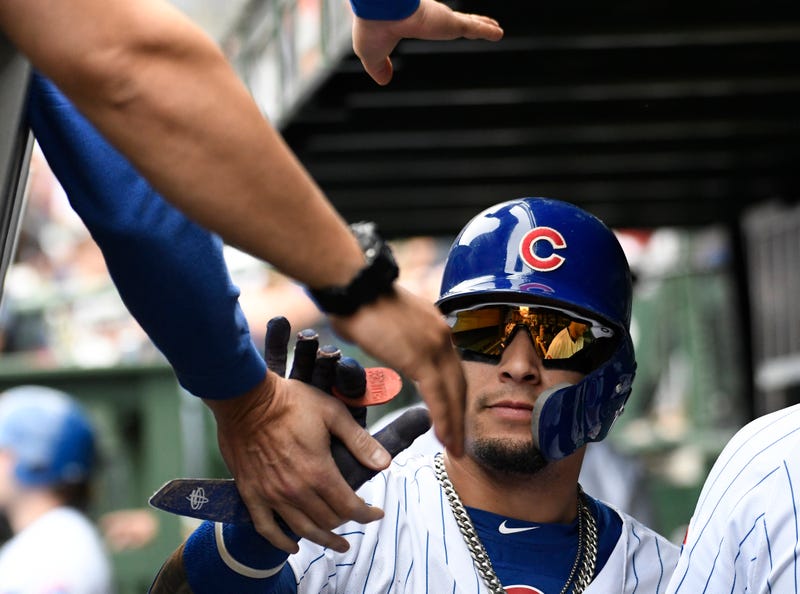 Javier Baez is one of the game's most popular players. Photo credit (David Banks/Getty Images)

What's more, in his most extended look at shortstop, Baez graded out as the seventh-best fielder at any position in baseball, posting 26 defensive runs saved.

Even as the Cubs attempt to cut costs - which may eventually include trading former National League MVP Kris Bryant - Bruce Levine of 670 The Score reported in January that the Cubs have discussed a long-term deal with Baez, a sign of how much the organizational values the 27-year-old. 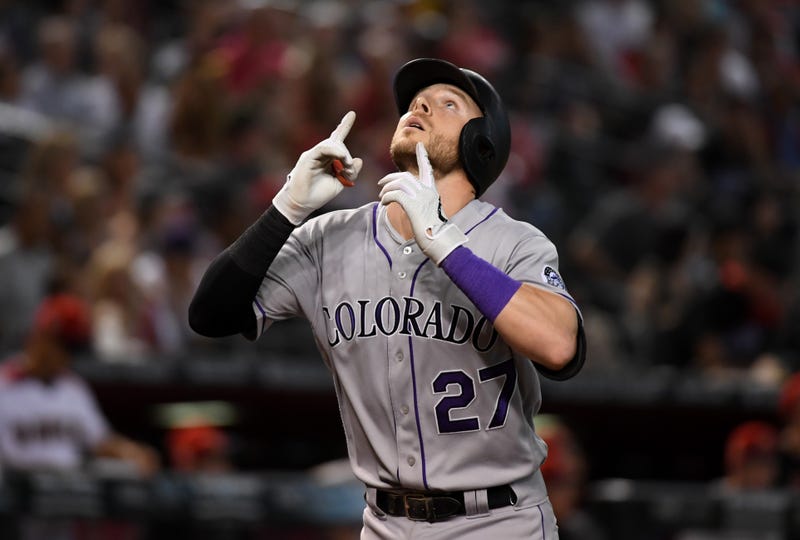 He's been overshadowed by Nolan Arenado - and Charlie Blackmon, to a lesser extent - but Story has cemented himself as one of the game's elite shortstops over the past two seasons.

In 2019, Story hit .294 with 35 home runs, 85 RBIs and 23 stolen bases. FanGraphs says that since the start of the 2018 season, Story has been the 13th most valuable position player in baseball, which shouldn't come as a surprise when you consider how effective he is defensively.

The Rockies don't appear to have a path forward in terms of contending in the National League West in 2020 or for the foreseeable future, which is a major reason that Arenado's future with the team is uncertain. Story is signed through the 2021 season, and if he continues on the pace he's been on the past two years, he's going to become a very wealthy man, regardless of where he plays. 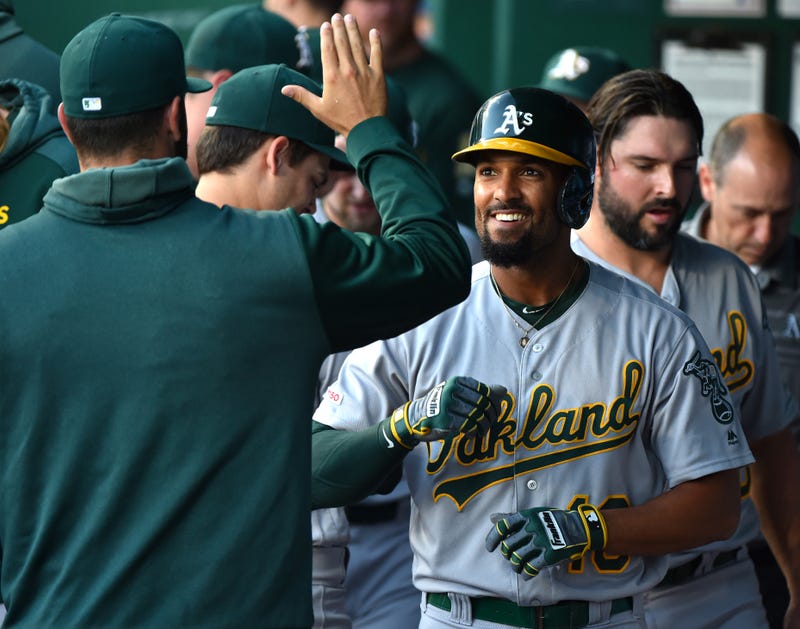 In case you weren't playing close attention, Semien was one of the 10 most valuable position players in baseball a season ago, slashing .285/.369/.522 with 33 home runs, 92 RBIs, 87 walks and a staggering 7.6 fWAR. Semien finished behind just Mike Trout and Alex Bregman in American League MVP voting.

Understandably, there's a slight level of concern that Semien - who exploded in his age-28 season - will take a noticeable step back in 2020. Baseball is a complicated game, though, and simply because you develop into a superstar later than others doesn't mean you won't be able to maintain that type of production for at least a few seasons.

If 2019 proves to be indicative of what's to come for Semien, the A's, who have won 97 games in each of the last two seasons, could overtake the scandal-ridden Houston Astros and win the American League West. 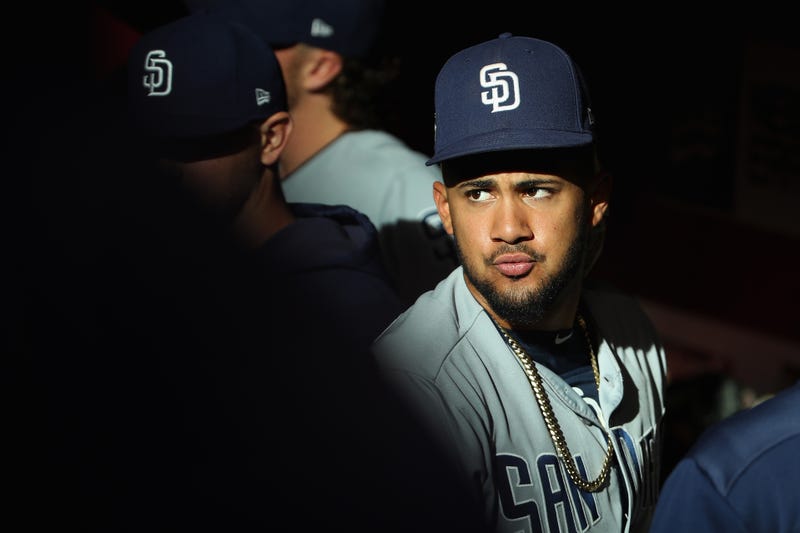 Tatis Jr. was limited to just 84 games in his rookie season, but he flashed Hall of Fame potential when he was on the field, hitting .317 with 22 home runs, 53 RBIs and 16 stolen bases in just over half of a season.

The only thing that could limit Tatis Jr.'s seemingly limitless potential is his health. A season ago, he only played 84 games because he had extended injured list stints caused by hamstring and back injuries. If he's healthy, Tatis Jr. will be one of the best players in baseball in 2020 and the Padres could challenge for their first postseason appearance since 2006. 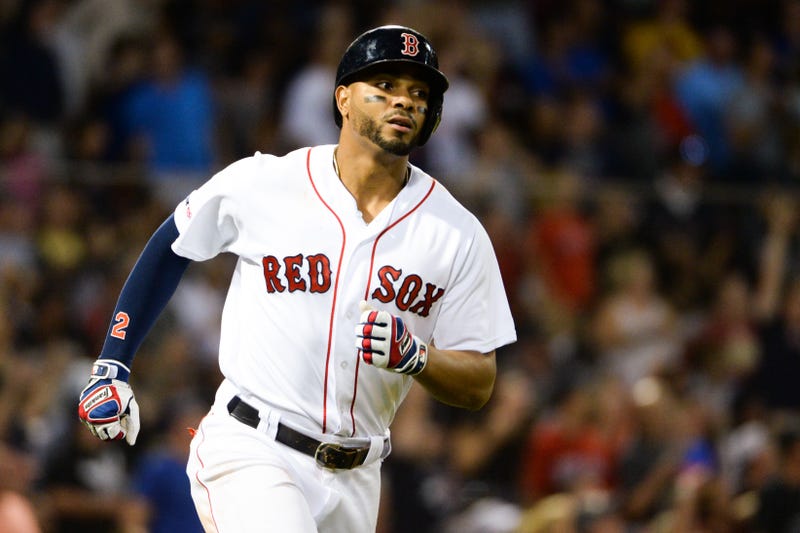 Xander Bogaerts has become one of the faces of the Red Sox. Photo credit (Kathryn Riley/Getty Images)

With Mookie Betts in Los Angeles and Chris Sale slated to start the season on the injured list, Bogaerts, who is entering year one of a six-year/$120 million deal, has become the face of the Red Sox.

Over the past two seasons, FanGraphs says that Bogaerts has been the second most valuable full-time shortstop, slashing .300/.373/.540 with 56 home runs, 220 RBIs and an 11.7 fWAR over that timespan.

The Red Sox will likely struggle to compete with the Tampa Bay Rays and New York Yankees in the American League East, but with Bogaerts leading a lineup that still includes Rafael Devers, J.D. Martinez and Andrew Benintendi, the team should still be very productive offensively. 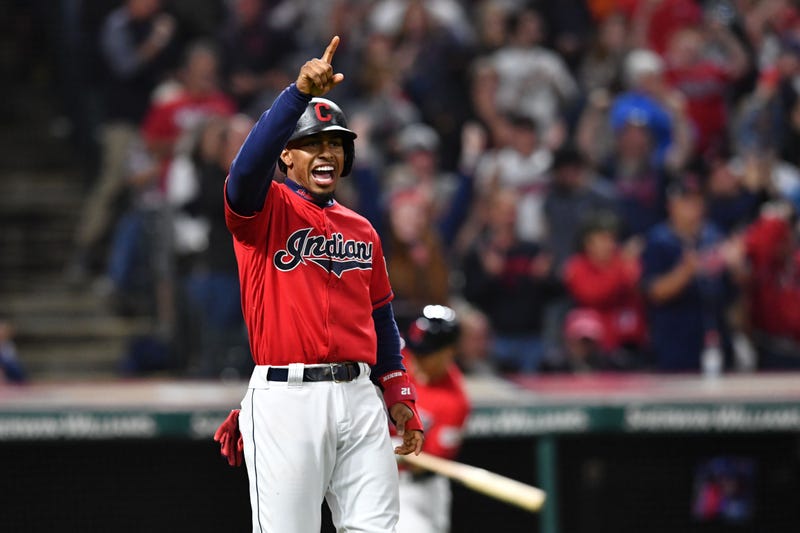 Francisco Lindor may be entering his final season with the Indians. Photo credit (Jason Miller/Getty Images)

Lindor posted a 4.4 fWAR in 2019, and that was his lowest total since his rookie season of 2015, just in case you needed a reminder of how special the 26-year-old is.

In what may be his final season in Cleveland, Steamer is among the projection models that think Lindor will have one of the finest seasons of his young career, saying that he'll slash .289/.355/.532 with 35 home runs, 95 RBIs, 22 stolen bases and a 6.1 fWAR. With a mounting belief that the Indians are unlikely to pony up what will be necessary to retain Lindor past the 2021 season - when he can become a free agent - teams may get aggressive in their pursuit of Lindor on the trade market this summer.

Of course, the Indians won 93 games a season ago despite relative down seasons from both Lindor and Jose Ramirez. Both checked in on the RADIO.COM Sports top 25 position players for the 2020 season countdown, meaning we expect that rather than seriously entertaining trade offers for Lindor this summer, the Indians will be looking to add to their roster and make a World Series run while he's still in Cleveland.