All season long, the Yankees have overcome adversity. Every time a player went down with an injury, they weathered the storm and came out stronger on the other end and eventually clinched their first AL East title since 2012.

But with a week left in the season and the playoffs about to start, the Yankees may be facing their toughest challenge yet.

Starting pitcher Domingo German will not pitch again this year, playoffs included, after being placed on administrative leave under the MLB-MLBPA joint domestic violence policy, per ESPN’s Buster Olney.

German’s absence is a much more serious and troubling issue than any injury, and one that is bigger than anything happening on the field. It should be thoroughly investigated by the league before the 27-year-old is allowed to pitch again.

There is still a baseball component the Yankees must deal with, though, and that is they are now down a key pitcher for October in what already was a thin starting staff.

German had been an integral part of the Yankees' pitching this season. He was 18-4 with a 4.03 ERA and 153 strikeouts in 143 innings pitched. He had been tapering his innings off recently, pitching out of the bullpen following CC Sabathia's starts — a formula the Yankees may have used in the postseason.

Currently, the Yankees will rely heavily on James Paxton and Masahiro Tanaka. Paxton has been their best pitcher since the All-Star break. He’s 9-2 with a 3.74 ERA in his last 12 starts, but he is not playoff-tested. Pitching in October is a different animal, just ask Clayton Kershaw and his career 4.32 postseason ERA.

Tanaka has proven to be reliable in the playoffs, and that may earn him the benefit of the doubt, but he’s been muddled in mediocrity for most of the season.

After that is likely where Boone planned to get “untraditional.”

The Yankees’ bullpen is a strength and is deep — but it was deeper with the presence of German and Dellin Betances — whose brief return ended with an Achilles’ tear.

The idea of combining German with Sabathia would help bridge the gap to the big arms in the later innings, similar to an opener. 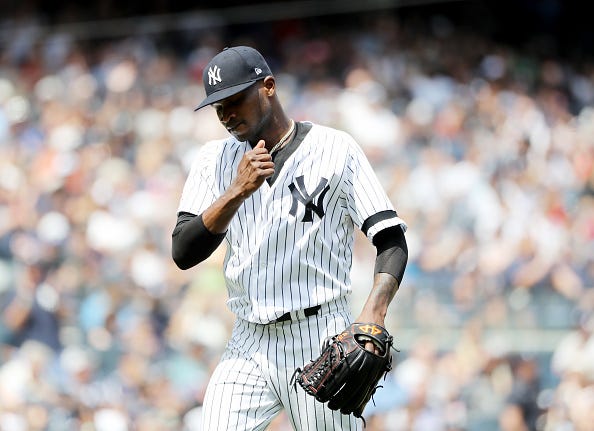 The Yankees could turn to Luis Severino for that kind of role. The right-hander threw 67 pitches against the Los Angeles Angels in his first start back on Tuesday and is still being built up. He looked good, too, touching 98 mph and showed excellent command, throwing 47 pitches for strikes.

Boone plans to work Sabathia out of the bullpen the final week of the season, too, so it could also mean Severino starting and handing the ball to Sabathia or J.A. Happ for two innings.

Even with this scenario, it leaves the Yankees in a void for the fourth game of a series — the one in which German likely would have gotten the ball. They could use an opener, which would likely consist of some combination of Chad Green, Happ or Luis Cessa — not quite an intimidating group for opposing hitters.

Another option is to use Paxton on three days’ rest, not exactly an ideal scenario.

Regardless, the Game 4 matchups will probably not be favorable for the Yankees, putting pressure on Paxton, Tanaka and Severino early in the series.

Severino is the likely X-factor. If he can return to his ace-form, even for four to five innings, it would give the Yankees a much-needed boost from their starting pitching.

If not, Paxton and Tanaka must set the tone early in the series, or the Yankees’ October could be short-lived.