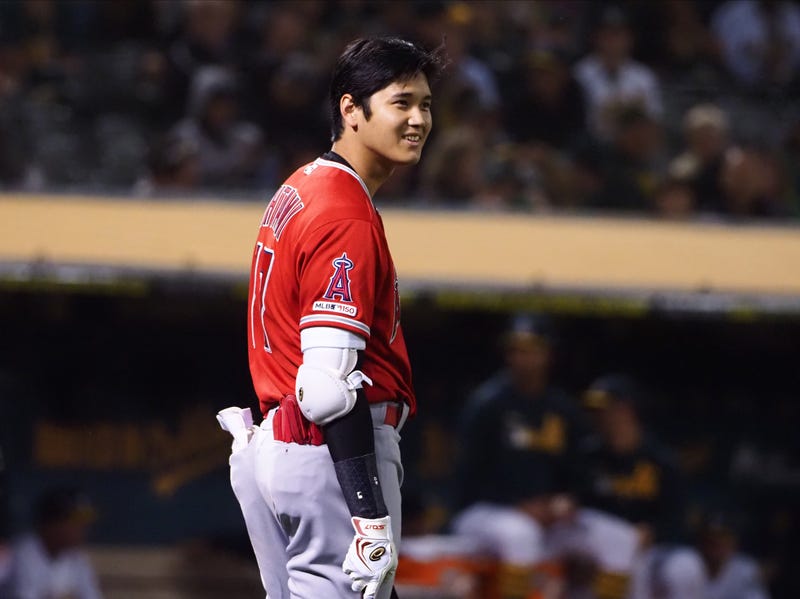 When you’re on the same team as Mike Trout, it’s hard to steal the spotlight away from him. But when you're capable of being an All-Star both as a hitter and a starting pitcher, you’re obviously a talent that’s hard to ignore.

On this week’s episode of “Big Time Baseball,” Josh Lewin and Jon Heyman were joined by general manager Billy Eppler to discuss how his Angels will utilize their prized star Shohei Ohtani going forward.

It only makes sense that the Angels want to get the most out of Ohtani. But after undergoing Tommy John surgery last season, the second-year phenom has been unable to take the mound all year. He’s still producing at a high level in the batter’s box, reaching double-digit numbers in home runs and stolen bases in just under 400 at-bats and posting a .289/.345/.504 slash line.

While Eppler and the Angels want to get him back on the mound, they want to keep their young star in a situation that benefits him as well as the team.

“He’s still a very young player - he’s 24 years old - and I think you want to be very mindful of the variables that you throw at a young player,” Eppler said. “He’s clearly going to be coming off of a very invasive procedure and so you want to keep things as consistent as possible and as familiar as possible.

That would lend itself to keeping him in the rotation, keeping him on a once-a-week program like he was accustomed to in Japan and like we did in the first half of last season.”

However, it’s also important that his ability at the plate remains a force in the Los Angeles lineup.

“If he is a designated hitter for four days a week, I think that’s a reasonable expectation,” Eppler said. “After that DH period is over, he’ll have a day off, then he’ll have his start, and then another day off. Then he’ll be back to DH-ing."

“Ultimately, a full season of Shohei Ohtani would be approximately 24-25 starts if he goes once a week, and that’s also going to lend itself to probably 340-360 plate appearances. I think that’s how you maximize the output of Shohei without changing and introducing a new variable."

Keeping Ohtani’s role with the team consistent is of the utmost importance for Eppler moving forward.

“When you’re coming off of surgery, to say ‘hey, you’re going to play the outfield’ or ‘now you’re going to relieve’... all of those things are just other obstacles and other variables that could just compromise this young player’s health,” Eppler said.

Eppler went on to talk about how the team has stayed cohesive during this trying season and what the Angels need in order to become a playoff-caliber club. Minnesota Twins GM Thad Levine also joined Heyman and Lewin on this week’s episode.

You can listen and subscribe to “Big Time Baseball” on iTunes, among other podcasting platforms. Follow @RDCSports on Twitter to stay up-to-date with each new episode!