The last time Manny Machado traveled to Philadelphia was in December of 2018, on a free-agent visit. He was greeted by a union electrician, hoping to take a selfie with the next great Phillie. His beaming smile was projected on the video board at Citizens Bank Park as the Phillies pitched him on donning red pinstripes.

Machado would ultimately get his free-agent payday - one that was briefly record-setting - but it didn't come from the Phillies. The Phillies reportedly "never made a final offer" to the four-time All-Star infielder, with the Padres ultimately signing Machado to a 10-year/$300 million deal that Phillies general manager Matt Klentak said went beyond where his club was comfortable going to.

Of course, such a deal wasn't beyond where the Phillies where comfortable going to for any player. It was simply more than they were willing to offer Machado, who had been a public relations nightmare in his postseason run with the Los Angeles Dodgers. Ultimately, though, the Phillies gave Bryce Harper a 13-year/$330 million deal, a sign that they just ultimately preferred Harper of the two 26-year-old star free-agents.

Friday, Machado will return to Philadelphia for the first time since his free-agent visit, as the Padres open up a three-game weekend set with the Phillies. In the first seasons of their respective contracts, both Machado and Harper have had good, not great seasons by the lofty standards they are held to.

Harper has two multi-home run games in the last six games and hit a walk-off grand slam Thursday, but still finds himself at "only" 25 home runs in mid-August. Rather incredibly, Machado has one more home run than Harper in 2019, which becomes even more noteworthy when you consider that Machado has hit half of his home runs in home games at Petco Park, which isn't exactly the hitter's paradise that Citizens Bank Park is. 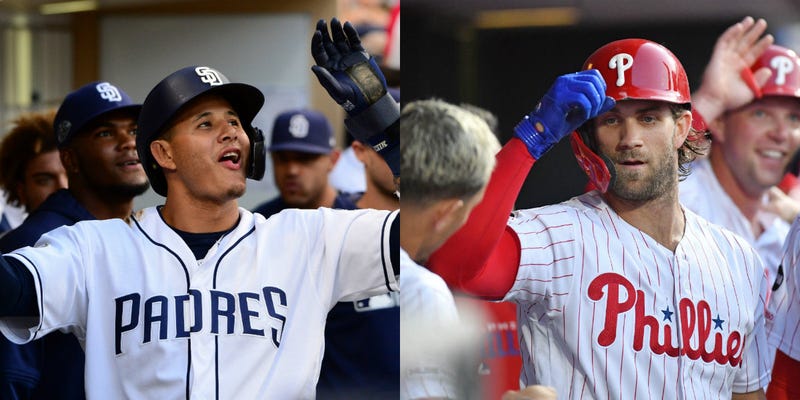 Manny Machado (left) and the Padres will face off with Bryce Harper (right) and the Phillies this weekend. Photo credit (Jake Roth, Eric Hartline/USA Today Images)

While Machado has a slight lead in the home runs category, Harper tops him in nearly every other offensive category - both traditional and advanced. Harper has driven in 17 more runs, he's walked 37 more times, has an on-base percentage 40 points higher than Machado and 11 more weighted runs created.

Defensively, while Machado isn't as dominant with his glove as when he first came up with the Baltimore Orioles, he remains valuable in that he can play both shortstop and third base. With that said, he's largely played third base, his better position, with star rookie shortstop Fernando Tatis Jr. having emerged. Machado has six defensive runs saved as a third baseman, and FanGraphs says he's been the seventh best defender at the hot corner in 2019.

While Harper has never been a Gold Glove-caliber defender like Machado, he's had quite the bounce-back defensively in 2019, which is important to note. Even if you toss out the 477.1 innings that Harper played in center field for the Washington Nationals in 2018, he still posted -16 defensive runs saved. Some suggested he was hesitant in the field because he was in a contract year. Well, that opinion has aged well, because Harper has one defensive run saved in right field in 2019. His ultimate zone rating has improved from -7.4 in 2018 to 5.8 this season. Oh, and a year after failing to record a single outfield assist from right field, Harper has seven outfield assists in 2019.

In the end, the metric that may best tell the tale of how Harper and Machado have been individually and when compared to each other is fWAR.

Harper does (2.9) narrowly edge out Machado (2.5) in terms of fWAR. However, Harper posted a staggering 9.3 fWAR in National League MVP season of 2015. In 2017, he was limited to 111 games because of a knee injury, but still managed to post a 4.8 fWAR. Machado, meanwhile, has topped six fWAR three times in his career, including in 2018. As Harper said when he signed with the Phillies, not every season is going to be an MVP season - fWAR makes it clear that while both Harper and Machado have made their teams better in 2019, neither are putting up seasons comparable with the best few of their respective careers.