Say what you will about the 1998 home run race between Sammy Sosa and Mark McGwire. Mark it with an asterisk, call it a disgrace to the game of baseball, brush it away as a pair of statistics to be forgotten. Do whatever you want with it.

But don't try and tell me that it didn't make for some of the most entertaining baseball in the history of our game. Trust me, I would know. I was 10 months old when the race was really heating up. In all seriousness, though, I've heard from my brother, my cousin and several friends and coworkers about just how exciting it was to live through the madness of the 1998 season.

But even non-steroid induced home run mania can be exciting, as the rest of this list proves. In honor of the McGwire-Sosa showdown that will be the focus on the newest ESPN special "Long Gone Summer," here are some of the most thrilling home run races in MLB history. 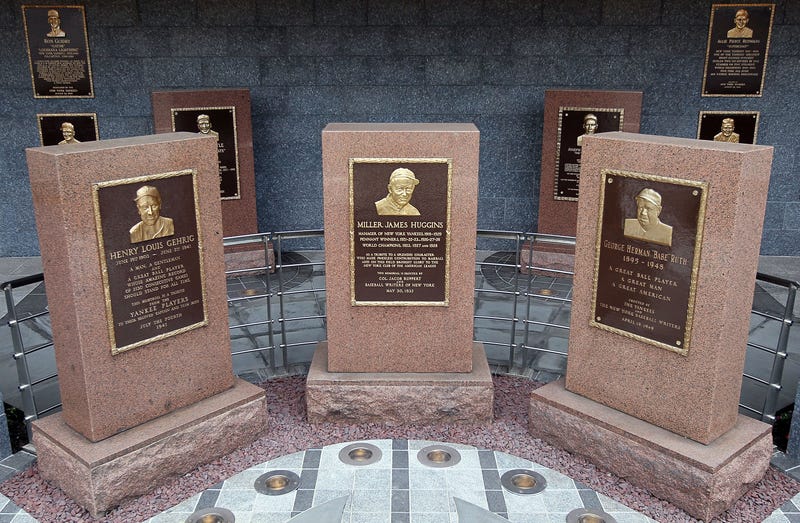 This is all a tiresome way of me explaining that no one was necessarily expecting Gehrig to compete with Ruth for a home run crown the way that Big Bambino had been dominating the league. But in 1931, Gehrig saw an opportunity after Ruth got off to a particularly unspectacular start, hitting nine home runs through the first two months of play. Gehrig, only at eight, caught fire during the summer months, hitting 11 in both June and July to beat out Ruth’s nine and 10.

Ruth came back and the two were knotted after August. The whole month of September was a thrilling race, and a two-home run game from Ruth on September 25 put him ahead by one with only two days left to go. But Gehrig, with the title so close, hit a shot the following day and the two ended up tied for the league lead with 46 apiece.

Apparently, there’s a little bit of controversy as well. A couple of different online blogs, including Call to the Pen of the Fansided network, say that Gehrig was robbed of a home run earlier in the year after it was mistaken as staying inside the park. However, nothing I found officially confirms this.

From 1938 to 1942, Hank Greenberg and Ted Williams were the American League leaders in home runs in four of the five seasons. But then the war pulled them away from the game, and names like Rudy York, Vern Stephens and Nick Etten sat atop the home run leaderboards over the next few years.

It might be reasonable to assume that spending three years away from the Major Leagues would take a toll on your ability to play at a high level. 1946 proved otherwise.

The two AL sluggers returned and picked up right where they left off, bringing much needed star power back to the game and embarking on a thrilling race for the home run crown. It took Williams a little while to get going, but by the end of the summer, he had asserted himself at the top of the leaderboards yet again, with 33 home runs on August 20. Greenberg wasn’t having the same success, with just 25 home runs to that point.

Something clicked for Greenberg the rest of the way. He began clubbing home runs and driving in runs at an otherworldly pace. Just look at his 162-game pace over the last five weeks of the season:

Needless to say, he caught up and then easily surpassed Williams down the stretch, finishing with 44 to Teddy Ballgame’s 38.

Forget a 30 for 30. This race was documented, fictionally, in 61*, a feature-length movie revolving around the two Yankees sluggers’ quests to break Babe Ruth’s 1927 single-season home run record.

Though one horse was pulled out of the race early, the lead changed hands multiple times throughout the summer while both were still active. By the time Maris hit his first home run of the season, Mantle had already drilled seven. But a mid-May surge saw Maris hit four in as many games before he added seven more as May turned into June over an eight-game span.

After Maris took the lead, it was hard for Mantle to catch up or hold a lead for long. But he stayed right there. By the end of June, Maris led 27 to 25. July came and went, and Mantle had chopped one dinger off of Maris’s lead while both bats stayed hot, and Maris led 40 to 39. When Mantle reached number 50 in early September, Maris was at 53.

It wasn’t until Mantle developed an abscess in his hip, much to the chagrin of fans hoping for their team’s centerpiece to make a comeback, that Maris pulled away. In the final game of the 1961 season, Maris hit number 61. 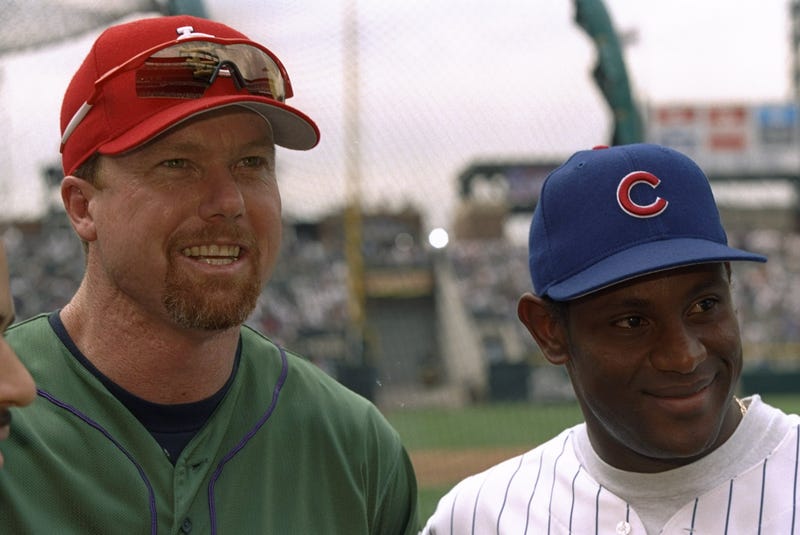 The 1998 home run race between McGwire and Sosa is the subject of ESPN's newest special. Photo credit (Jed Jacobsohn/Getty Images)

I could probably say more about this one, but Sunday night’s 30 for 30, “Long Gone Summer,” is probably going to cover all the bases for me.

But a brief refresher can still transport you right back into the madness that was the second half of the 1998 MLB season. At various points, you can see just how unstoppable these guys became over brief stretches of time.

On June 12, McGwire took a 31 to 20 lead over Sosa. Nine days later, Sosa had tightened the count significantly, clubbing 10 homers to reach 30 while McGwire “only” hit two to up his tally to 33.

When McGwire broke Roger Maris’s single-season record of 61, it was September 8, and Sosa had 58. Five days later, Sosa knotted the score at 62 apiece. Fun fact? McGwire’s 62nd looked like a double off the bat -- at least it did to the slugger, himself.

And so on. No lead was safe.

1999 shouldn’t be ruled out, either, as it featured a similarly thrilling race between the two division rivals. Sosa held a pretty significant lead down the stretch, entering September with 55 home runs while McGwire trailed with 51. Sosa reached 60 first as well, but McGwire’s absurd 14-home run September/October enabled him to pull out the home run title again by just one, winning 65 to 64.

Ryan Howard won the 2006 home run crown with 58 in his MVP campaign. Prince Fielder took home the title the following season, clubbing 50 in just his second full season. But entering the 2009 season, the best player of the three, Albert Pujols, had yet to lead the league in home runs despite notching 319 over his first eight seasons.

After the first half of the season, it seemed like all but a done deal. Pujols wasn’t just going for the home run record; he was going for history. He swatted 32 homers and 87 RBI over the first half of the year, while Fielder and Howard came in with 22 apiece. But as Pujols came back down to earth -- kind of, as he still maintained an OPS above 1.000 in the second half -- the two fellow NL sluggers kept their feet on the pedal.

By the time September rolled around, Pujols had hit only nine second-half home runs, while Howard had hit 15 and Fielder had hit 14. Pujols got hot again once September started, hitting six more home runs in the first nine days of the month. He hit his 47th on September 9, when Howard and Fielder were both at 38.

Not quite. It wasn’t that Howard and Fielder caught fire. Instead, Pujols went on an extended home run drought, unable to add another round-tripper to his total of 47 the rest of the way. Though Howard inched closer and closer, finishing the year with two bombs in the last two games, he finished with 45.

Fielder, on the other hand, entered the last day of the season with 44 and faced off with, of all teams, Pujols’ Cardinals. He hit No. 45 in the fifth inning off of Joel Piniero, and hit No. 46 in the top of the ninth, a home run that allowed the game to progress into extra innings. He came up in the 10th as well, but was intentionally walked after the Brewers took a 9-7 lead.

The game ended with a popup to short by who else but Pujols, effectively losing the game for his Cardinals but keeping his crown intact. 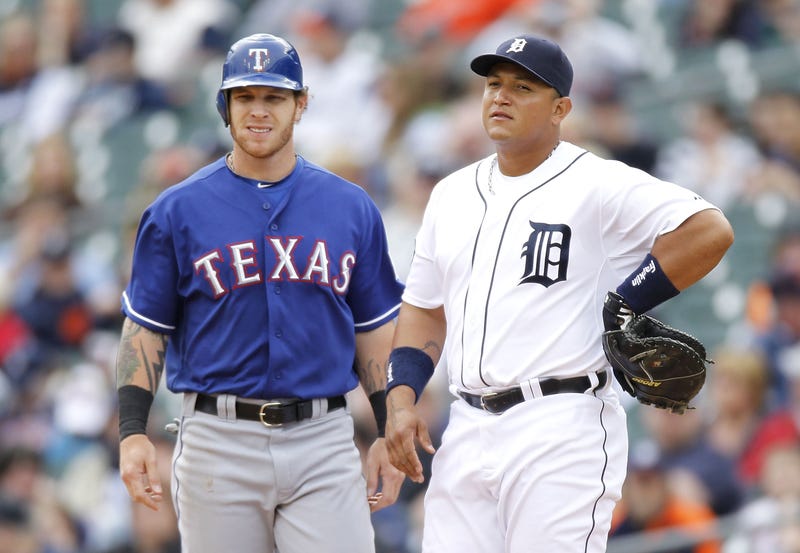 Miguel Cabrera’s quest for the elusive Triple Crown, which ultimately became the 15th in major league history (post-1900), was not easy. It wasn’t enough for him to dominate; he had to get past the other stars who were dominating. Two who gave him a real run for his money were Josh Hamilton and Curtis Granderson.

His RBI tally, at 139, was well ahead of runner-up Josh Hamilton. His .330 average was somewhat comfortably ahead of Mike Trout’s .326. And entering the final month of play, his home run lead was ahead of the two men who would become his biggest challengers. Miggy was at 38, Hamilton at 36, and Grandy at 34.

The three remained close throughout the entire last month of the season, with Hamilton and Granderson playing a little bit of catch-up throughout. On September 24, with around two weeks left to go, Hamilton hit his 43rd bomb to surpass Cabrera’s 42. Granderson, not far behind, hit his 40th on the same day.

But Hamilton wouldn’t hit any more round-trippers in 2012. Cabrera tied him on September 29 and took the lead, with 44, two games later. But Granderson wasn’t quite done. On the last day of the season, Granderson took the Red Sox deep twice through seven innings, needing only one more to tie Cabrera. He was due to come up again in the seventh inning, but the Yankees decided to pull him for Melky Mesa, seeing as the score was 14-2.

Or, perhaps, they were just helping Cabrera on his path to join a special part of baseball history.