It has been nearly a month since MLB Commissioner Rob Manfred released the league's findings in its investigation of sign stealing from the Houston Astros, which resulted in a year-long suspension of manager A.J. Hinch and GM Jeff Luhnow, as well as a $5 million fine and draft picks stripped from the organization, but the fallout from the scandal has not stopped there.

Players around the league have continued to publicly criticize the Astros players as well as Manfred himself, accusing Houston of further cheating through use of buzzers, as well as complaints that Manfred never should have granted players immunity and that they should have to face some sort of punishment.

Manfred addressed these concerns on two different platforms on Sunday, speaking with reporters during a press conference, and also appearing in a one-on-one interview with Karl Ravech of ESPN.

On ESPN, Manfred said that had he punished the players, it would have resulted in a grievance filed by the MLB Players' Association because Luhnow failed to communicate the updated memo outlining MLB's policy on the use of technology during the games to the Astros players in the 2017 season.

"I understand people's desire to have the players pay a price for what went on here," Manfred told Ravech. "I think if you watch the players, watch their faces when they have to deal with this issue publicly, they have paid a price. To think they're skipping down the road into spring training, happy, that's just a mischaracterization of where we are. Having said that, the desire to have actual discipline imposed on them, I understand it and in a perfect world it would have happened. We ended up where we ended up in pursuit of really, I think, the most important goal of getting the facts and getting them out there for people to know it."

Manfred was asked about his "perfect world" comment in his press conference on Sunday, and said that "if I could have found all the facts without granting immunity, I would have done that."

"You need someone to cooperate with you. You need someone to give you factual information," Manfred told Ravech. "The challenge here is everybody who knew the real facts of what was going on were kinda within that tone of silence within that dugout and the clubhouse. I don’t absolve the players of responsibility. I think that their comments from some of them you can see the fact that they understand they have a fundamental obligation to play within the rules. I don’t think that any of them feel like they’ve been absolved, frankly."

Some players, such as Cubs pitcher Yu Darvish, have said the Astros should be stripped of their 2017 World Series title. The commissioner revealed in his press conference that it was a topic that was seriously discussed throughout the investigation, but ultimately decided against it. 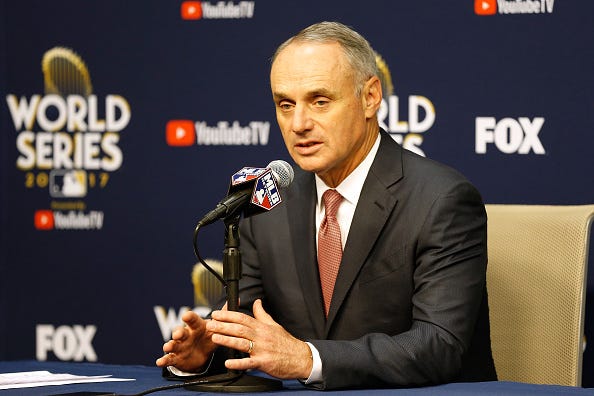 "We thought about it," Manfred said. "If you talk about minutes of discussion, during the process, it was high — in terms of the minutes we spent talking about it. My thinking involves several points, first of all it had never happened in baseball. I’m a precedent guy, I’m not saying always follow precedent, but I think you ought to start by looking back at the way things have been done and you have to have a really good reason to depart from that precedent, I think.

"Number two, I believe the most fundamental obligation was to get the facts, put them out there, and let people make their own judgment as to what happened in the 2017 season, the 2017 World Series. I think we can all agree we got enough facts out there and plenty of people had made their judgments as to what went on. Once you have a situation in which the 2017 World Series will always be looked at as something different, whether or not you put an asterisk or ask for the trophy back, I don’t think it makes that much of a difference. I think we did what we should do, we found the facts and were transparent about them.

"Last, once you go down that road of changing what happened on the field, I just don't know where you stop."

Manfred did acknowledge in his ESPN interview that the Astros' apology and press conference held by owner Jim Crane last week "was not successful," and added that the organization, from ownership to the players, needs to accept responsibility in order to move on from this scandal and that he would help them get there.

"Look, whatever a team does, for better or for worse, I feel it’s part of the responsibility of my position that we’ll continue to work with the Astros to help them put this behind them," he said. "I think that in the time that's gone by, some players have been out individually, I think they’ve done a much better job taking responsibility and expressing remorse and that process is going to continue."

Manfred also further addressed the allegations that the team used buzzers to cheat during the 2019 season.

"We were fully aware of that when we were working on the investigation," he said. "I think that, in a way, the piece that no one appreciates is we found no evidence — not a single witness who could corroborate that there were buzzers being used during the 2019 season, or indeed that they were doing anything inappropriate during the 2019 season.

"Given that the players told us chapter and verse about 2017 and chapter and verse about 2018, it does give some credibility to the denials that were uniform of the use of buzzers in 2019. Can I tell you 100 percent certain that it didn’t happen? No. You could never know that. People tell you what they tell you. I can tell you that the evidence in this issue was consistent in the direction that nothing was going on in that the evidence was consistent that there was inappropriate behavior in 2017 and '18."

As for new policies in place for the 2020 season to prevent a similar incident, Manfred said that he is having ongoing discussions with the MLBPA on enforcing stricter rules.

"I do expect that we will for 2020, will have very serious restrictions on player and player personnel access to video in-game," he said. "I think it’s really important to us to send a message to our fans that not only we investigate and punish, but we alter our policies in way to help make sure it doesn’thappen again.