DALLAS - Major League Baseball will allow a limited number of fans to attend the NLCS and the World Series, which is set to be played at Globe Life Field in Arlington, TX.

Tickets will go on sale starting on Tuesday, Oct. 6 at 10 a.m. at MLB.com and texasrangers.com.

MLB says approximately 11,500 tickets will be available for purchase to each game, with 10,550 fans sitting throughout the ballpark and another 950 in suites.

The league says it has received approval to host fans at the ballpark and will have health and safety protocols in conjunction with state and local regulations for those who attend.

More details are below:

·         Tickets in the seating bowl will be sold in groups of four contiguous seats, called pods. Individuals may purchase a limit of one pod per NLCS and World Series game.

·         No seats will be sold within 20 feet of where a player can be located on the field, in the dugouts or in the bullpen.

·         Masks will be mandatory for all fans except when actively eating or drinking at their ticketed seats.

·         Hand sanitizing stations will be available throughout the ballpark.

·         No bags will be permitted except for those that are carried for medical reasons or manufactured diaper bags that accompany infants and young children.

For more information on Globe Life Field Suite rentals for 2020 NLCS and World Series games, please call 972-RANGERS or go to texasrangers.com.
Please note that tickets will not be sold that include food and beverage options during Postseason games.

More details about ballpark information for fans will be made available by the Rangers in advance of the ticket on sale date. Below are the full schedules for the NLCS and World Series. 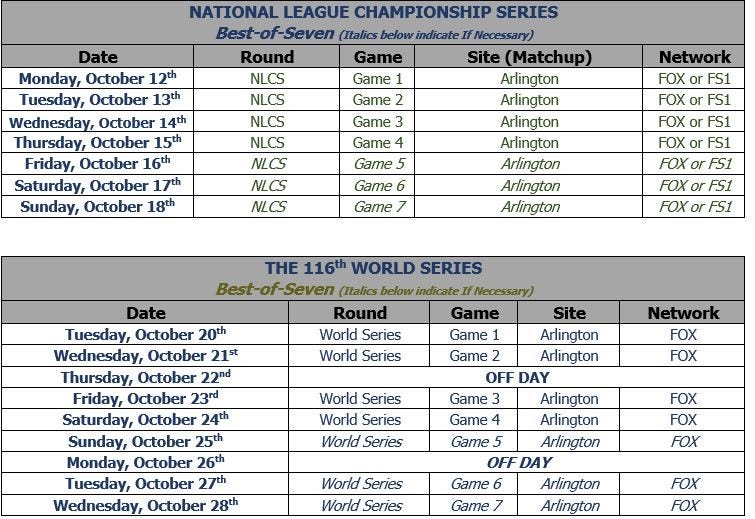