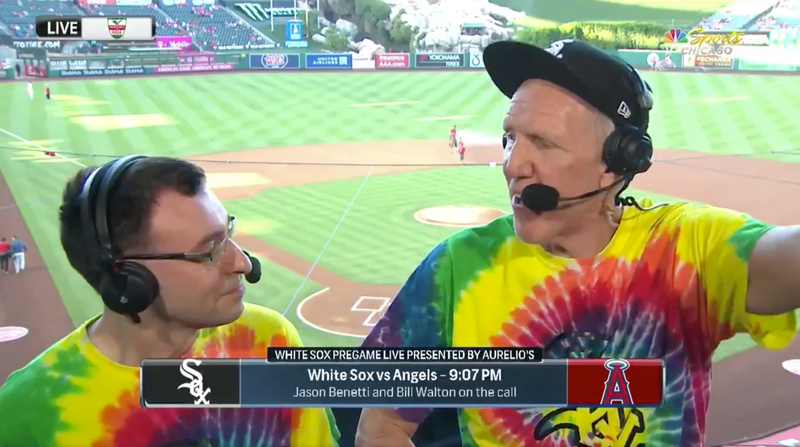 NBA legend and college basketball announcer Bill Walton is known for his rather unique personality, and he brought that over to the baseball world on Friday night.

The California native joined the Chicago White Sox broadcast booth for their game against the Los Angeles Angels in Anaheim filling in as the color commentator for Steve Stone. He was alongside play-by-play man Jason Benetti, who called the Maui Invitational basketball tournament with Walton last November, and knew what he was getting into.

In true Walton fashion, the pair commemorated the 50th anniversary of Woodstock by wearing tie-dyed White Sox T-shirts while calling the game.

The game itself was a trip for Walton.

While the 66-year-old Hall of Famer’s wackiness is often on display during his basketball broadcasts, calling a baseball game was a new adventure and Walton marveled at what he was watching.

Nothing exemplified his excitement more than when Mike Trout tied his career-high in home runs with his 41st blast of the season.

“That’s Trout? Swimming upstream! Avoiding all the flies! And sending one ricocheting through the universe,” Walton said. “And look at this crowd, raucous as can be. One of the most successful franchises, just packing them in here at the Big A.”

Among some of his other highlights include calling back to his own baseball days, trying to understand Eloy Jimenez’s name, shouting over Benetti to will a grand slam over the fence for James McCann and perplexed that the same two teams are going to play again on Saturday.

THIS IS REAL LIFE pic.twitter.com/87ITex8TVW

The White Sox TV broadcast tweeted out a compilation of Walton’s night in the broadcast booth.