New York Mets first baseman Pete Alonso is having one of the greatest rookie seasons in baseball history, as he's hit 43 home runs and driven in 102 runs. And yet, Alonso is likely to become an afterthought in the National League MVP race.

Milwaukee Brewers outfielder Christian Yelich, the reigning National League MVP, has a very real chance to repeat as the winner of the award. Yelich, 27, has slashed .326/.421/.672 with 43 home runs, 93 RBIs and a 7.0 fWAR (fWAR is FanGraphs' version of WAR, which you can learn about here) in 2019. Even with nearly a month left in the 2019 season, Yelich has topped his 2018 season total in home runs, he's improved on his on-base percentage and slugging percentage from 2018 and is very likely to top the 7.6 fWAR he posted a season ago. 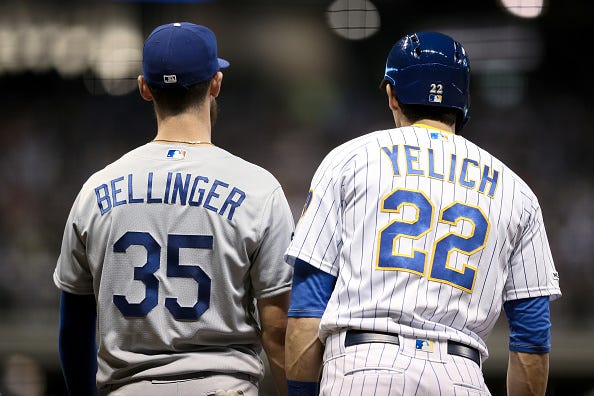 In a world that makes sense, Bellinger's defensive prowess could separate him from Yelich if the two continue to put up nearly identical offensive production. More likely is that Bellinger's team success - the Dodgers have 90 wins, 20 more than the Brewers - could break the tie.

But while the "Yeli vs Belli" debate has dominated much of the 2019 season, there's a late entrant to this contest - Washington Nationals third baseman Anthony Rendon.

Rendon is in a contract year. It's safe to say he's made himself quite a bit of coin in 2019, regardless of who ends up signing the checks.

The 29-year-old would win the National League batting title if the season ended today, as he's hitting .337. His .417 on-base percentage tops Bellinger's .414 mark. Rendon has "just" 32 home runs, but he leads the trio with 111 RBIs, which is likely to play well with more traditional voters. His 6.7 fWAR falls just short of Yelich and Bellinger, but is still within striking distance of the two.

Rendon has one defensive run saved and a 4.6 defensive WAR, so while his fielding tops that of Yelich, it doesn't separate him like Bellinger's does.

All of this isn't meant to overlook the tremendous seasons that Ketel Marte, Ronald Acuna Jr., J.T. Realmuto and Trevor Story are having in the National League. But this appears to be a three-horse race that's entering the final stretch. And while Bellinger appears to have a slight edge, it's not difficult to imagine any of the trio ultimately walking away with the 2019 National League MVP.