Not having a full 162-game season in 2020 will undoubtedly affect how far Albert Pujols can climb up baseball's all-time home runs list. If there doesn't end up being a 2020 season at all - as opposed to a shortened season - that will be devastating for the 40-year-old.

Whenever baseball is played next, the three time MVP will find himself on the cusp of passing Hall of Famer Willie Mays for fifth in MLB history in home runs. Even in a shortened season, if Pujols is able to stay healthy in 2020, he should pass Mays. He is currently sitting on 656 career home runs, just four shy of Mays' career total.

Just how much higher Pujols can climb on the list is less clear. He's under contract with the Los Angeles Angels through the 2021 season. When that deal wraps up, he'll have just played his age-41 season. It's entirely possible by then he'll have teammates that weren't alive when he won the 2001 National League Rookie of the Year as a member of the St. Louis Cardinals. It's long been assumed that 2021 will be Pujols' final season.

That said, Pujols reminded ESPN's Alden Gonzalez earlier this month that he has never promised to retire after the 2021 season. He may, but he may not.

Of course, it takes two to tango. Pujols is due $30 million in 2021, so unless he decides to forego that, he's going to play for the Angels. After that, nothing is guaranteed. What could help his chances of extending his career another season or two beyond that? A) If he's close to a major home run milestone and B) If the DH has come to the National League on a full-time basis.

Over the past three seasons, Pujols has averaged just under 22 home runs per season. If he continued on a similar pace over two more full seasons, he would be right in the range of Alex Rodriguez, who is fourth in MLB history with 696 home runs. The problem is, there's almost no scenario where 2020 is a full season because of COVID-19. At best, the season will be 82 games long in 2020. At worst, there won't be a season at all. 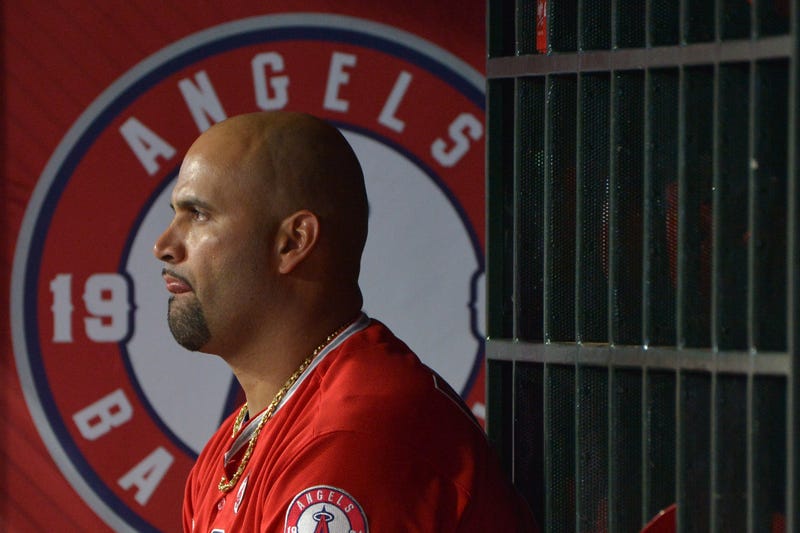 One way or another, Pujols is almost certainly going to enter 2021 30 or more home runs away from Rodriguez. Even though he'll be hitting in a lineup that should include Mike Trout, Anthony Rendon, Shoehi Ohtani and Justin Upton, chances are Pujols won't hit 30 or more home runs in his age-41 season.

So the stakes of a shortened or cancelled season should be clear from Pujols' perspective; with two more full seasons, he had a very real chance to pass Rodriguez and become the fourth member of MLB's 700-home run club. With uncertainty about what shape the 2020 season will take, his chances of accomplishing either of those feats now aren't nearly as high.

His best bet would be to hang on for a season or two after 2021 if he's within striking distance. The problem is, the Angels will almost certainly go in another direction to best maximize Trout's remaining peak seasons. Would another team bring him just to hit a historic home run? No team brought in Rodriguez after the Yankees released him in August of 2016 despite him being just four home runs away from 700. Granted, Rodriguez made quite a bit of enemies during his career. For whatever reputation Pujols may or may not have in terms of how he interacts with the media, he doesn't bring the baggage that Rodriguez would have. That said, Rodriguez had hit 33 home runs and posted a 2.7 fWAR as recently as the 2015 season. Pujols hasn't hit over 30 home runs since - ironically - 2016 and has posted a negative fWAR for three consecutive seasons. Will teams be clamoring for him ahead of his age-42 season if he wasn't a productive player in his age-37 season?

Pujols' best bet may be that a team planning to bottom out in 2022 brings him in to chase a milestone home run as a distraction. The current MLB CBA expires after the 2021 season, and the DH is expected to become universal in 2022, if not sooner. That works in Pujols' favor. That, of course, assumes that a new CBA will be agreed upon and there won't be a work stoppage after the 2021 season, which probably shouldn't be assumed.

The most likely scenario, though, is that Pujols passes Mays in 2020 or 2021 but falls shy of Rodriguez. There would be no shame in finishing fifth in MLB history in home runs. Pujols is one of the greatest right-handed hitters in the history of the game, and has a spot waiting for him in Cooperstown five years after whenever his career ultimately concludes.