After weeks of tepid movement, a late-developing NBA trade market caught fire in the days and hours prior to Thursday’s deadline. The flurry began with a four-team blockbuster and was capped by a swap that sent D’Angelo Russell to Minnesota, where he’ll join his pal Karl-Anthony Towns. In between, there were a handful of interesting moves for contenders and cellar dwellers alike.

Here’s a look at how each team fared: 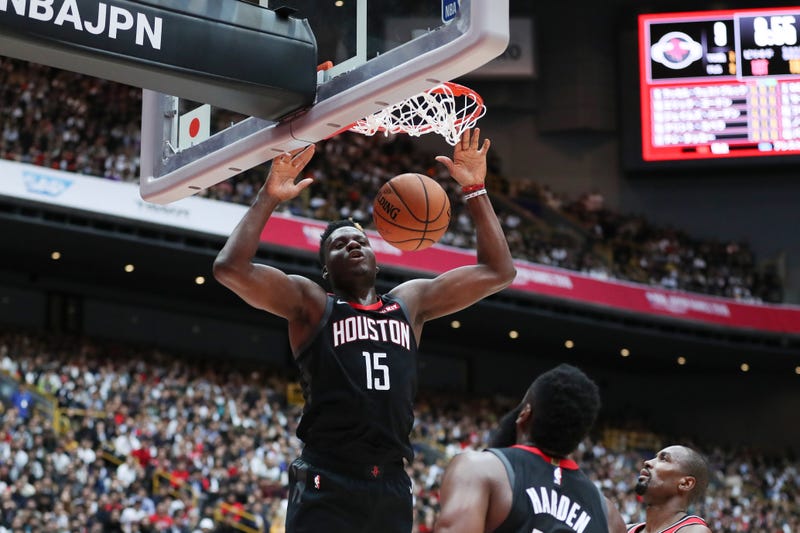 Atlanta Hawks
﻿The Hawks upgraded substantially at center in what was a buyer’s market for big men. Clint Capela doesn’t shoot from outside but feasts in the paint, and forms a formidable trio with Trae Young and John Collins. Dewayne Dedmon flopped in Sacramento in the first year of a $40M contract, but maybe he flourishes again back in Atlanta. Dedmon, unlike, Capela, can shoot it from deep. Atlanta also got back two second-rounders, all essentially at the cost of a top-15-protected first-round pick (via Brooklyn), plus reserve center Alex Len, and Jabari Parker.

Minnesota Timberwolves
﻿The Wolves were faced with selling off Karl-Anthony Towns or building around him, and wisely chose the latter. KAT may have forced their hand with a postgame explosion on Wednesday, but alas they ended in the right place.

To get there, they had to cut their losses on Andrew Wiggins, packaging him with their 2020 first-rounder (top-3 protected). Russell joins his fourth team in his five-year career. Now he gets to play with his buddy Towns, as he once predicted. Malik Beasley and Juan Hernangomez get second-half auditions with their new team before restricted free agency.

New York Knicks
The Knicks needed to turn Marcus Morris’ career year into assets, and did just that, recouping the Clippers’ first-rounder and Maurice Harkless’ $11M expiring deal. Harkless played his college ball at St. John’s, so that and his relentless defense should make him a favorite among Knicks fans. The draft pick is the key takeaway, but the goodwill doesn't hurt either.

Denver Nuggets
The Nuggets shipped out Malik Beasley and Juan Hernangomez, both restricted free agents, as part of the four-team deal. For their trouble, they picked up the Rockets’ first-round pick, plus Shabazz Napier (later flipped for Jordan McRae), Noah Vonleh, and Keita Bates-Diop to backfill the lost minutes. Not bad at all. 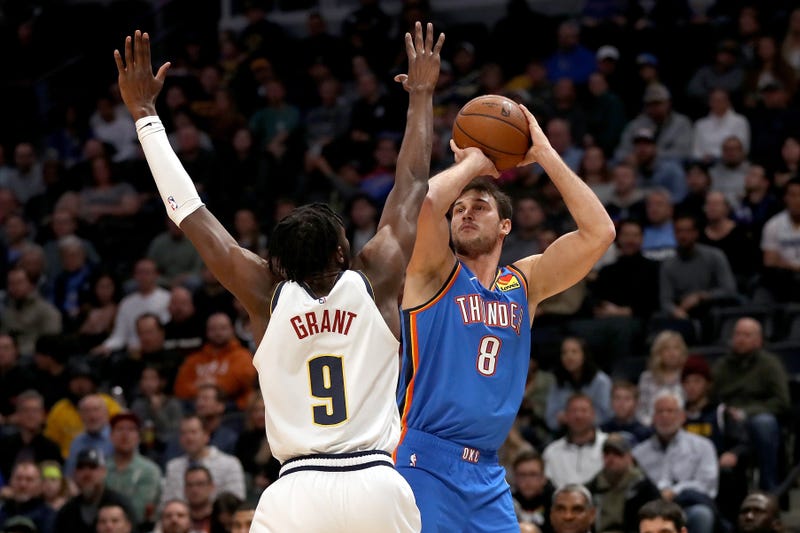 The Heat reportedly came up short in their pursuit of Danillo Gallinari. Photo credit Getty Images

Miami Heat
The Heat succeeded in dumping Dion Waiters, sure, but adding Andre Iguodala and giving him an extension doesn’t seem like much of a relief. Iggy can be of use in the stretch run and playoffs, but I’m not sure the Heat are positioned to make a deep run. Plus, Jae Crowder and Solomon Hill have no business getting minutes for Miami.

To top it off, the Heat reportedly agreed on the terms of a trade to acquire Danillo Gallinari from the Thunder, only to see it fall apart when they couldn’t agree on extension terms. Adding Iggy makes more sense if it’s done in conjunction with a separate move to add a better player such as Gallinari. By itself, it feels pretty blah.

Detroit Pistons
The Pistons had several assets of varying value to deal off, but in the end offloaded only Andre Drummond in a swap with the Cavs. The deal brought back a second-rounder and two expiring contracts in John Henson and Brandon Knight, a pretty modest return for the league's leading rebounder.

The cap space is nice, sure, but that’s a hard sell to Pistons fans. Detroit also chose to hold onto veterans Derrick Rose, who is enjoying a great season, and Markieff Morris. Both reportedly drew trade interest. The Pistons won’t be competing any time soon, so now might have been the time to cash in.

Cleveland Cavaliers
The Cavs had a logjam in the front court, so naturally they went out and acquired a center in Drummond. While the big man essentially only cost the Cavs a second-rounder, they would have been better suited trading away a big rather than bringing one in. Kevin Love, Tristan Thompson and Larry Nance were all trade candidates, but instead they all remain in Cleveland, except with fewer minutes to go around among them after the arrival of Drummond.

Los Angeles Lakers
The Lakers declined to make any moves, holding onto young combo forward Kyle Kuzma, who was one of the few realistic trade assets on the roster. Kuzma is showing signs of life lately but has generally struggled to find his groove with LeBron James and Anthony Davis as the top scoring options, and he doesn’t play much defense. That kind of game doesn’t necessarily translate in the playoffs, when the minutes get tight, but for now the Lakers are standing pat on Kuzma. 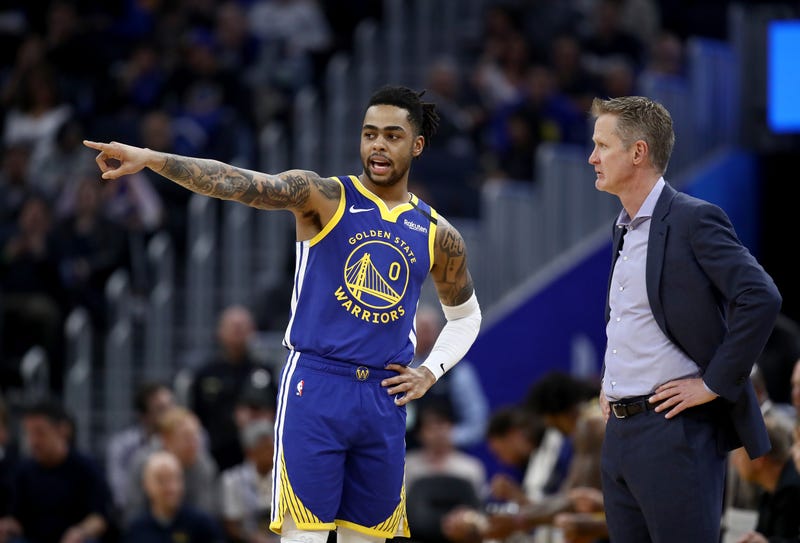 Golden State Warriors
﻿Golden State acted like a team trying to get under the luxury tax threshold throughout the trading period. The Warriors won’t miss Willie Cauley-Stein, Alec Burks or Glenn Robinson III, and did well to collect Minnesota’s first-rounder and no fewer than four second-round picks while selling them off.

Wiggins has largely disappointed since he was the first overall pick. The Warriors are hoping they can get more out of him than the Wolves ever did. His talent is apparent, so maybe it will come together in Golden State, where he’ll be the third or fourth option.

Russell didn’t have a clear role with the Warriors once Stephen Curry and Klay Thompson are back. Wiggins does, but it’s not clear they’ll be a better team. Time will tell.

Houston Rockets
﻿Houston was said to covet Robert Covington, and paid handsomely to get him. Covington was among the best perimeter players available in a market notably short on them, and his team-friendly contract made him all the more enticing.

To pry him away, the Rockets gave up Clint Capela, who is a double-double machine and bruiser in the paint, leaving them thin at center. They also surrendered their only 2020 first-round pick. Covington will probably thrive with the Rockets, but it’s not clear they’re much better than before. For now it feels like a questionable gamble.

Los Angeles Clippers
﻿The Clippers pursued Morris in free agency last summer, but moved on while Morris reportedly waited for a rich offer that never came. They ended up getting him anyway, at a fairly significant cost of their only 2020 first-round draft pick, though it will probably end up being in the late 20s.

The Clips are in win-now mode, though, so the deal makes sense in that regard. In Morris, they get a stretch power forward who can shoot from long range, enjoying a career year. If he helps them win their first title, few will care what comes of the pick they surrendered to get him.

Memphis Grizzlies
The Grizzlies’ front office followed a great offseason with an active trade deadline. Andre Iguodala had to go. Unloading Jae Crowder and Solomon Hill frees up minutes for developing players. Marquee acquisition Justise Winslow is hurt and still refining his game, but his defense and versatility appear to be a good fit with Memphis. Gorgui Dieng played great for a month while filling in for Towns earlier this season, and may be needed as insurance with Jonas Valanciunas banged up. Plus, they brought in a second-round draft pick.

In order to pry away Winslow and the pick, though, the Grizz had to take back Dion Waiters, who is under contract next season at a price tag of $12.65M and doesn't appear to be a fit at all. They also have a front-court logjam with Dieng and Jordan Bell now in the mix.

Philadelphia 76ers
The Sixers needed offensive help on the second unit, and got it relatively cheaply in Alec Burks and Glenn Robinson III. At the cost of three second-round picks, it’s hard to find much fault here, but something a little splashier would have been nice. Betters players were reported to be available, and it’s not clear the additions of journeymen Burks and Robinson will move the needle much.