It has already been an eventful All-Star Weekend, with a dunk contest for the ages on Saturday night between Derrick Jones Jr. and Aaron Gordon, with Jones taking the crown despite some controversial judging on Gordon's final dunk.

Sunday will turn its attention to the All-Star Game itself, which will be much different than years past with new rules that will pay tribute to the late Kobe Bryant, which will surely add some more intrigue than usual to the game.

Follow along with the RADIO.COM Sports team on all the latest news and updates from Chicago:

Among the changes to the All-Star Game to honor Bryant, NBA Commissioner Adam Silver announced on Saturday that the MVP trophy has been renamed after the late Lakers legend.

Who will win the first-ever Kobe Bryant Most Valuable Player Award at #NBAAllStar tonight? pic.twitter.com/7fdZYSVoWn

“There was no player who epitomized All-Star more than Kobe Bryant.”

Commissioner Silver on why the league changed the name of the All-Star MVP Award to the Kobe Bryant MVP Award. pic.twitter.com/SuAGeF7HSi

There were several pregame tributes to Bryant before tip-off, including one by hip-hop artist Dr. Dre which ran on TNT about 90 minutes before the start of the game.

Prior to tip-off, Magic Johnson gathered on stage with each All-Star to honor the memories of late NBA Commissioner David Stern and Bryant. Johnson spoke eloquently of what Stern meant to him personally, as well as the impact he had on the game and how he expanded it globally.

Johnson also reflected on Bryant, leading an eight-second moment of silence to remember him and Stern..

.@MagicJohnson leads an 8-second moment of silence for Kobe Bryant and David Stern before the #NBAAllStar game ✊ pic.twitter.com/WM7o6kiaTF

Johnson was followed by Chicago native Jennifer Hudson, who performed a powerful rendition of "For All We Know" as a tribute to Bryant, his daughter Gianna, and the other victims of the fatal Jan. 26 helicopter crash. Photos of Bryant and Gianna, or "Gigi," as many knew her, appeared on the screen behind Hudson.

Hudson was not the only Chicago musical artist to have a role in the pregame festivities. Rapper Common delivered a rhyme-inducing tribute to his home city and segued into honoring Bryant as well.

.@common honors the city of Chicago and Kobe Bryant with his opening tribute at #NBAAllStar pic.twitter.com/NFBpKwicB3

Common kept it going right into the starting lineup introductions, which left TNT broadcasters Reggie Miller and Grant Hill raving, calling it the best intro to an All-Star Game that they have ever seen.

The score resets after the first quarter, but it still holds some importance. First, Team LeBron won the charity Chicago Scholars $100,000 by winning the first quarter. The total scores of the first three quarters will also be added together at the start of the fourth quarter.

Clipper star Kawhi Leonard led all players with 12 points in the first quarter, and also had three rebounds and an assist for Team LeBron.

Team Giannis took the second quarter and won the charity After School Matters $100,000 with their second quarter victory. While the score resets again at halftime, Team Giannis is leading Team LeBron 92-83 in the total score that will be added up at the start of the fourth quarter.

Atlanta Hawks' Trae Young ended the second quarter in style, draining a halfcourt 3-pointer at the buzzer. Meanwhile, Chris Paul threw down an alley-oop for the first time ever in his career and Giannis Antetokuonmpo has 20 points, five rebounds and three assists as he joins Kawhi Leonard (25 points, four rebounds, two assists) as the frontrunners for the Kobe Bryant MVP Award.

Trae Young from HALFCOURT AT THE BUZZER! pic.twitter.com/stmRKb0xH9 #NBA

😱 WHAT JUST HAPPENED? 😱@CP3 on the receiving end of an alley-oop dunk ‼️ pic.twitter.com/n7acfACevH

So things got a little interesting in the third quarter. With the play on the court getting more competitive, the two teams tied, which means that the $100,000 charity prize will be added onto the $200,000 total given to the winner.

Leonard still leads all players with 28 points, while Antetokounmpo has 25, but others are starting to play there way into the MVP conversation. LeBron James has 19 points, four assists, two rebounds and two blocks, while Jazz center Rudy Gobert has 21 points and 11 rebounds for Team Giannis.

In what was most definitely the most exciting NBA All-Star Game in a long, long time, Team LeBron topped Team Giannis in a thrilling final quarter under the new format.

It was only fitting as Chicago native Anthony Davis sank the free throw — after missing his first — to seal the victory for Team LeBron in his hometown to complete a 33-point fourth quarter, overcoming a nine-point deficit to reach the target score of 157.

The victory also won the Chicago Scholars charity $300,000 — $400,000 total — as the children from the charity stormed the court to celebrate with the All-Stars.

Leonard finished with 30 points, seven rebounds and four assists while James and Chris Paul each had 23 points and six assists, with James adding five rebounds to his final line. 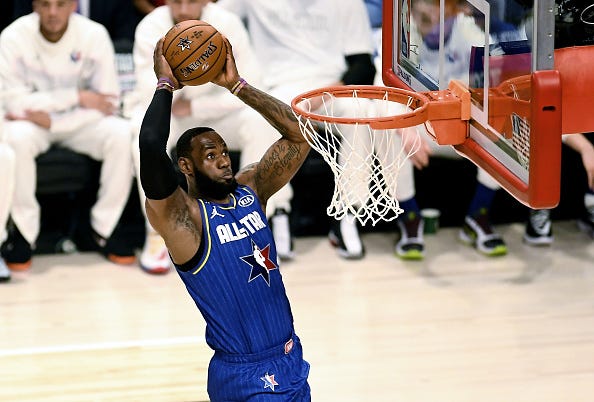 Antetokounmpo led his team with 25 points, 11 rebounds, four assists and three blocks while Embiid had 22 points and 10 rebounds.

The final quarter was certainly very different from what fans are used to seeing in the All-Star Game. Both teams hunkered down on defense, Kyle Lowry drew two charges, Antetokounmpo had two key blocks and there were replay reviews as it felt as if every possession mattered.

It was clear the new format resulted in a more competitive product — at least in the fourth quarter — and was a success. Players on the bench were standing and into it, and fans on social media were engaged as if it were a playoff game. The NBA should definitely consider continuing with this format in the future.

The Los Angeles Clippers forward was the best player on the floor all night, leading all scorers with 30 points and shot 8-for-14 from beyond the arc.

"They did a great job with the format this year," Leonard said. "They had us compete in the fourth quarter."

Leonard is the first to win the trophy named after Bryant, which made the honor extra special for him.

"It means a lot to me. Words can't even explain," Leonard said. "I want to thank Kobe for all he's done for me. All those long talks and workouts. Thank you. This is for him."