I remember walking around the halls of my high school in 2011 as a freshman -- yes, I'm that young -- and proudly rocking my Nike KD 4s. For a late bloomer that had not yet broken the five-foot barrier -- yes, I was also that short -- a pair of Kevin Durant's signature kicks inexplicably gave me some sort of confidence boost that my previous pairs of generic sneakers could never quite provide.

Did the KD 4s boost my game at all? I don't know... but probably, considering I was a force to be reckoned with from beyond the arc in my rec league. Would I have found the same success had I been donning the Peak Delly 1s, the signature shoe of Matthew Dellavedova? Probably not, but I love the fact that Delly had a shoe deal once upon a time.

Whatever the case, these shoes are successful for a reason. They connect fans with their favorite athletes, allowing you to experience part of the greatness of the players you idolize. Besides, if those guys are wearing these exact shoes in-game, they must be pretty solid sneakers for the everyman.

Sneaker companies realize the effect these shoes have on consumers. They realize the star power of the guys in the NBA and the massive brands they can subsequently create. And they realize just how much money is to be made out of these partnerships. So, in short, NBA players have inked quite lucrative deals with various shoe companies, to the point where their salaries come second as a source of income in special cases.

Let's look at just how much money some of the top sneaker deals have cost major shoe companies. And no, the Peak Delly 1s did not net the Australian guard enough money to earn a spot on the list. But we're glad we could include him in the article, anyway.

Endorsement values based on numbers reported by Forbes' Kurt Badenhausen in late Summer 2019. The details of contracts and the dollar figures behind them are not available for stars like Jayson Tatum, Luka Doncic, and some others who are mentioned below. 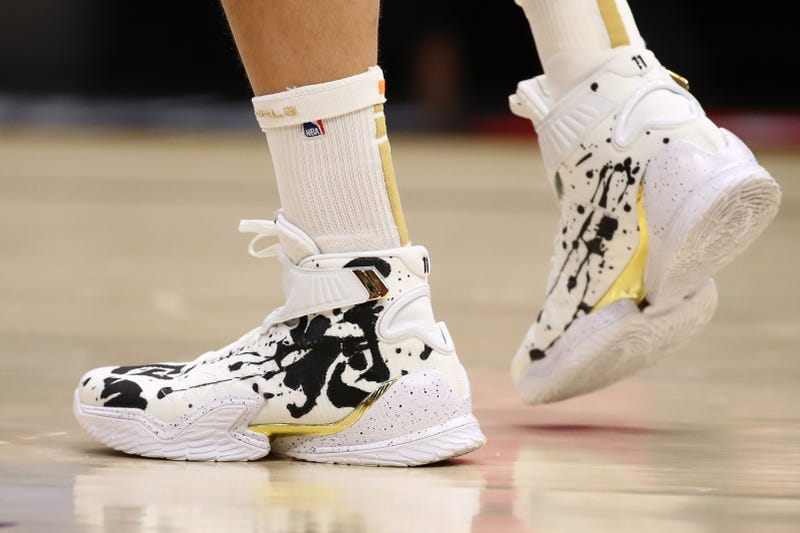 Nike's collection points to Antetokounmpo's "relentless work ethic" as a driving force behind his unstoppable play and his journey to become the first European-born player to boast their own sneaker as part of Nike's signature selection.

Though the exact financial figure of the deal is not publicly available, Doncic's deal is reported to have been for five years and a seven-figure dollar amount (via Elly Cosgrove and Jabari Young of CNBC).

Tatum called his decision to sign on with the Jordan brand "a dream come true". The exact details of the contract were not publicly available.

Hear what @JayTatum0 had to say about getting his call to join the Jordan family on this week’s The Encore. #TheLastDance #JUMPMAN pic.twitter.com/RV7ZuHwBYV

Leonard's path through sneaker endorsement deals hasn't been the smoothest. Leonard turned down a four-year deal worth over $20 million with Nike's Jordan brand, according to ABC News, implying that his deal with New Balance is worth "significantly more". However, Leonard has still engaged in talks with Nike recently, but not of the type that you'd want as a player seeking marketability. The Clippers' star recently lost a copyright case against the massive sports apparel company, and could be in for "much worse", according to Darren Heitner.

There's a long list of players who have signed endorsement deals overseas with Asian companies, including a member of the top 10. Gordon Hayward, Rajon Rondo and Kevon Looney all signed with Anta, according to Footwear News. Dellavedova is signed to Peak, along with Lou Williams. Aaron Gordon signed a huge contract with 361 Degrees earlier this year. Another Asian company boasts the No. 8 star on this list.

Forbes notes that Lillard's Adidas Dame signature shoe was the most popular non-Nike/Jordan signature model in the league in 2019, but the 2020 rankings on Baller Shoes DB show that that honor belongs to the Puma Clyde Hardwoods.

Embiid's contract with Under Armour was noteworthy, as it was expected to make him the highest-earning center in the NBA, according to Nick DePaula of ESPN. Embiid appeared as the No. 60 highest-paid athlete on Forbes' 2020 list, which was indeed the highest of any NBA center.

Though we don't know the dollar figure of this contract, like several others included in this section, we do know that Green's contract made him "a face of the company and a featured endorser across all brand marketing and product launches", according to ESPN's Nick DePaula.

Mitchell's deal with adidas was extended quickly, following his explosion as a top rookie talent. His signature shoe, the adidas D.O.N. Issue #1, was his first signature shoe and appeared immediately after his contract was rewritten into a multi-million-dollar deal (via Nick DePaula of ESPN).

Touted as perhaps the greatest college women's basketball player of all time, Ionescu signed a deal early in 2020.

The Hawks guard has emerged as one of the league's brightest young stars, and he's teased us all that some sort of shoe deal is in the making on Twitter (via Virgil Villanueva of Clutch Points). 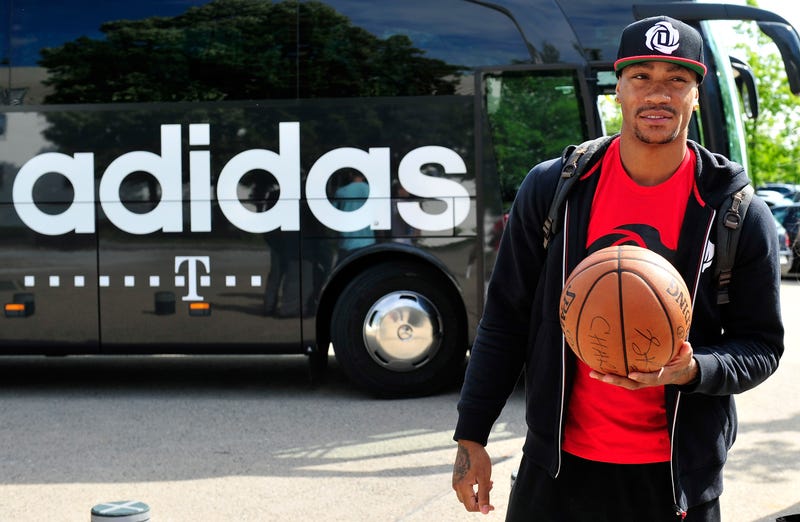 Rose is one of the two most problematic signings for adidas in recent years, pairing with John Wall to form a duo of two expensive pieces on the adidas roster that have seen injuries derail their careers. Rose has the added baggage of a rape allegation that has damaged his reputation in the eyes of many fans. Michael McCann of Sports Illustrated notes that the terms of the contract, which goes until 2025, dictate that it can be terminated if Rose retires early. However, with two straight seasons of 18-plus points per game, it seems Rose still has a lot left in the tank. 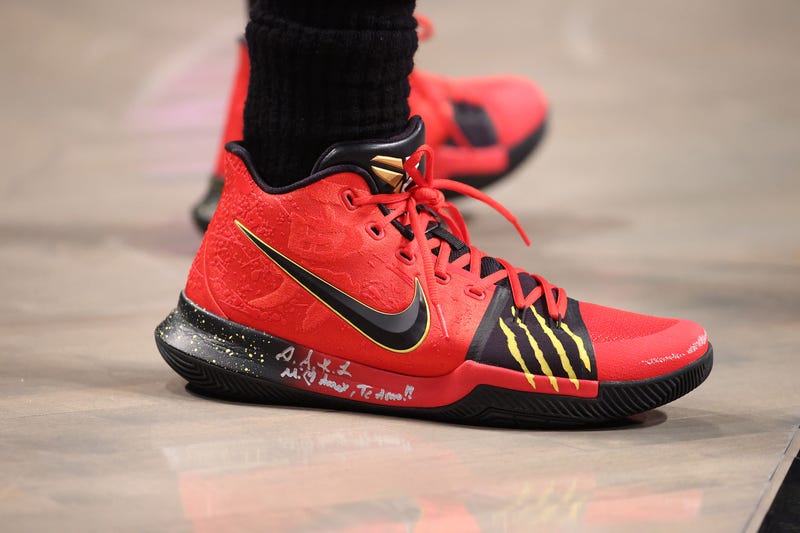 Irving's presence as an NBA star goes well beyond his ability on the court. He was selected as the cover athlete for NBA 2K18, he was elected by his peers as a vice president of the National Basketball Players Association, and he has featured in several of his Uncle Drew films to make a huge name for himself. His signature Nike Kyrie shoes were the second most-worn signature shoe in the NBA during the 2019-20 season, behind the Nike Kobes. 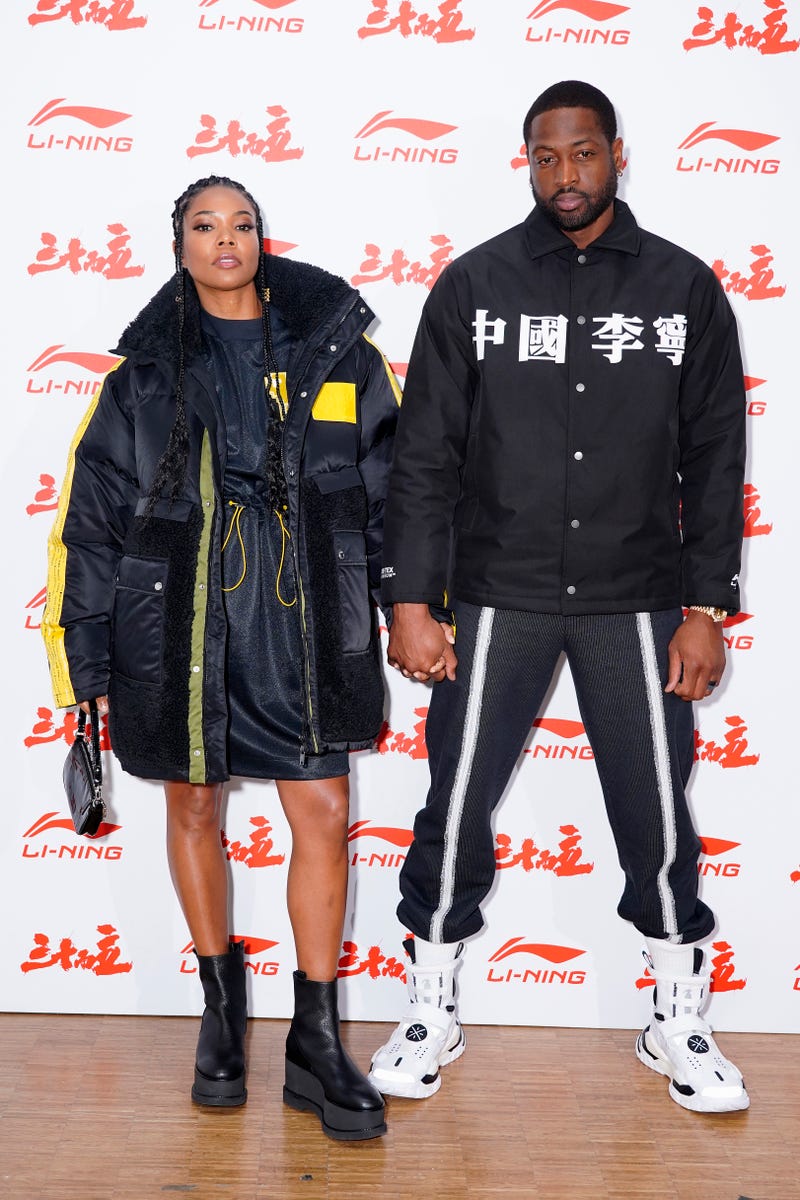 The Way of Wade signature line now features eight iterations, with the Way of Wade 8 featuring the recognizable strap in the middle of the shoe that has become the marker of this overseas brand. With a lifetime contract paving the way for Li-Ning and Wade to continue their journey together, several other NBA players have followed Flash's lead including C.J. McCollum, Evan Turner and Michael Carter-Williams. The recent controversy between the NBA and China has not affected these players' relationships with the company, according to various sources. Wade spoke about his decision to sign with Li-Ning here. 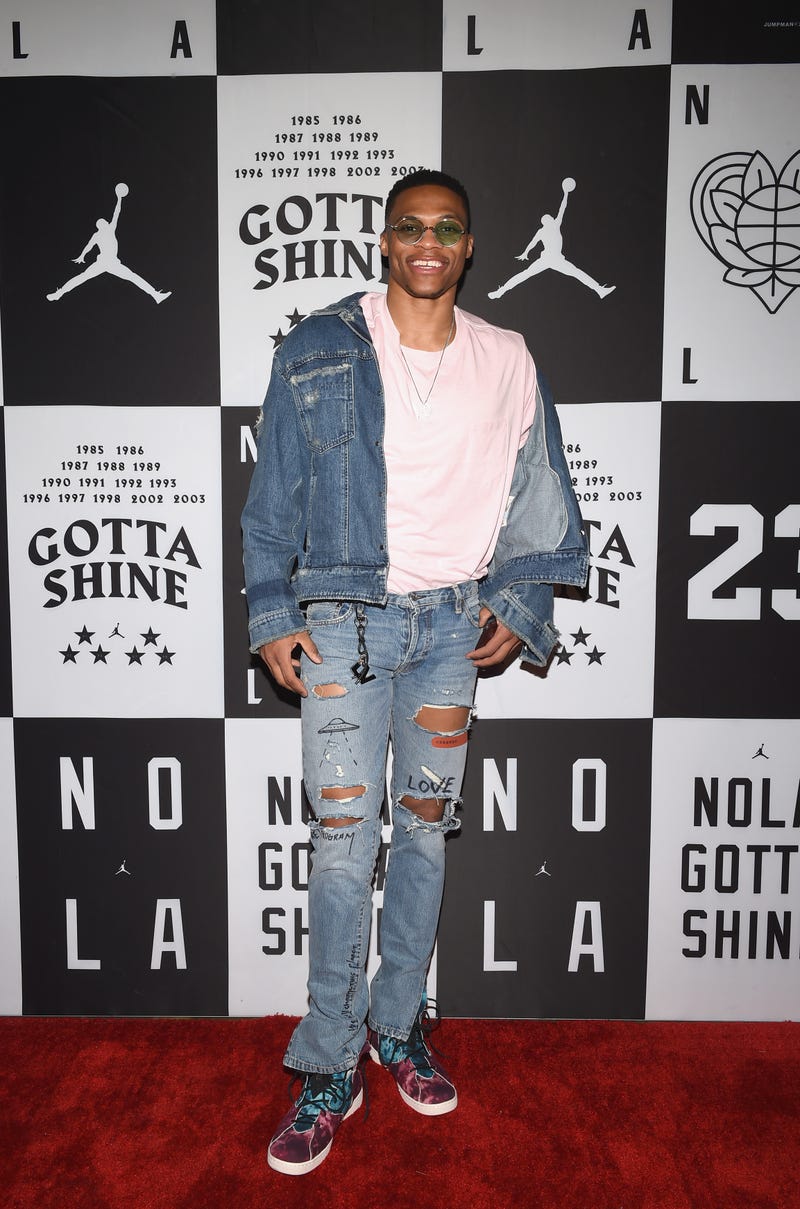 Russell Westbrook is known for his fashion sense, as seen here at a Jordan event. Photo credit (Erika Goldring/Getty Images for Jordan Brand)

At the time of Westbrook's extension with Nike in 2017, which pushed their partnership down the road for at least another 10 years, the star guard had not yet come out with a signature show. In 2018, that changed, as Westbrook unofficially became the new face of the brand over the likes of Chris Paul and Carmelo Anthony and came out with the Why Not Zer0. 1. It serves to show his mentality as a player, at times attempting what seems to be impossible, like taking off from ridiculous distances over much taller players as he flies to the rim. 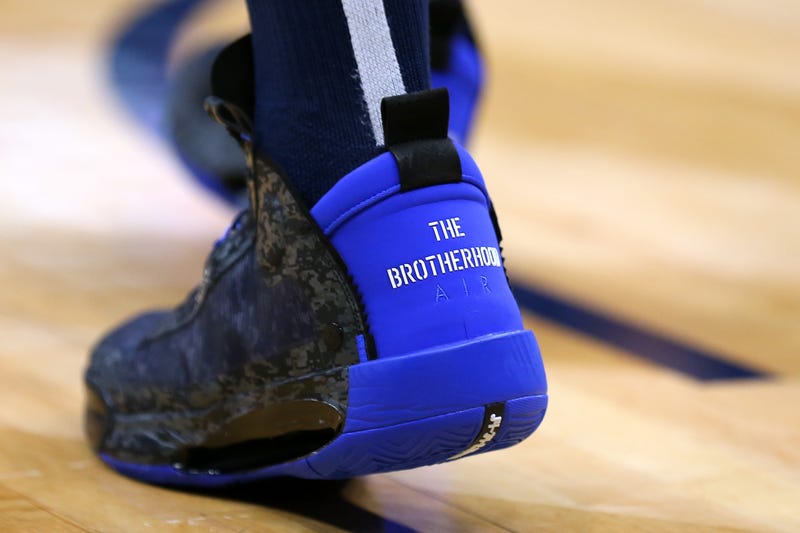 We have a feeling we're going to see Zion Williamson dethroning several of the game's all-time greats through the years. In signing his extremely lucrative contract with Jordan, he broke LeBron James' record for the richest rookie shoe deal in NBA history. 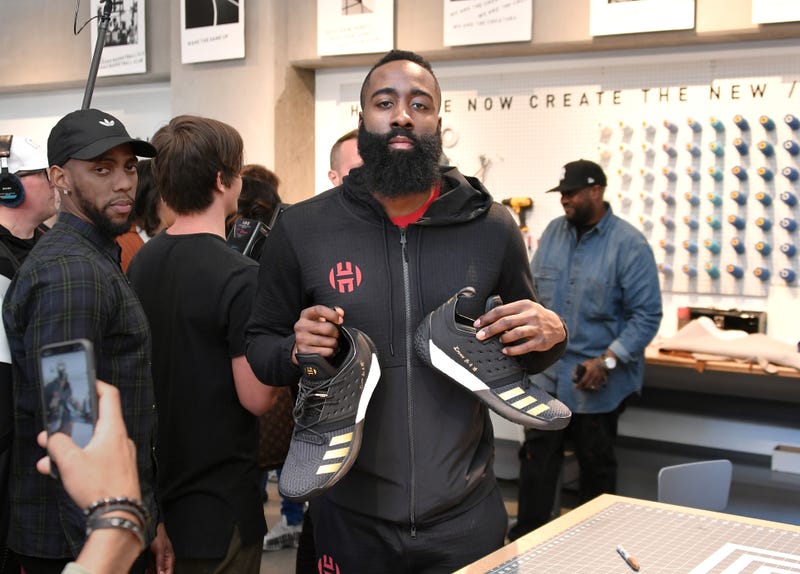 Harden holds up a pair of adidas shoes at a promotional event. Photo credit (Neilson Barnard/Getty Images for adidas)

Forbes notes that Harden's gigantic 2015 extension, in which he committed to adidas through 2028, is worth $200 million. Maybe it's a good thing he's staying put. Harden dropped 59 points in a pair of his signature shoes en route to a victory in one of the highest-scoring NBA games of all time. If the $200 million contract wasn't enough, adidas placed more stock in the Rockets guard with a full-page ad promoting his case for the MVP award back in the spring of 2019. 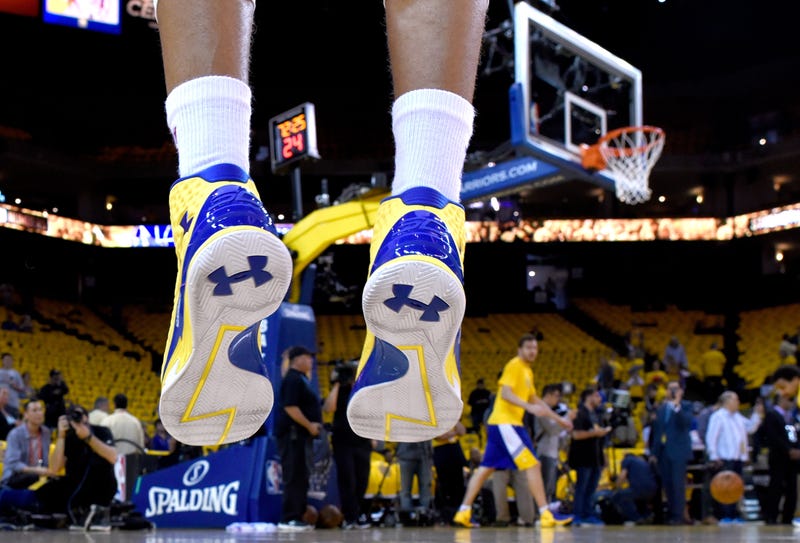 There was some recent speculation that Curry could possibly look to leave Under Armour in the wake of a recent plummet in the company's stock, according to Drew Shiller of NBC Sports. Curry has previously voiced his displeasure with some aspects of his relationship with Under Armour, including when the company's CEO Kevin Plank commended President Trump. However, the two sides seem to have worked out a solution. 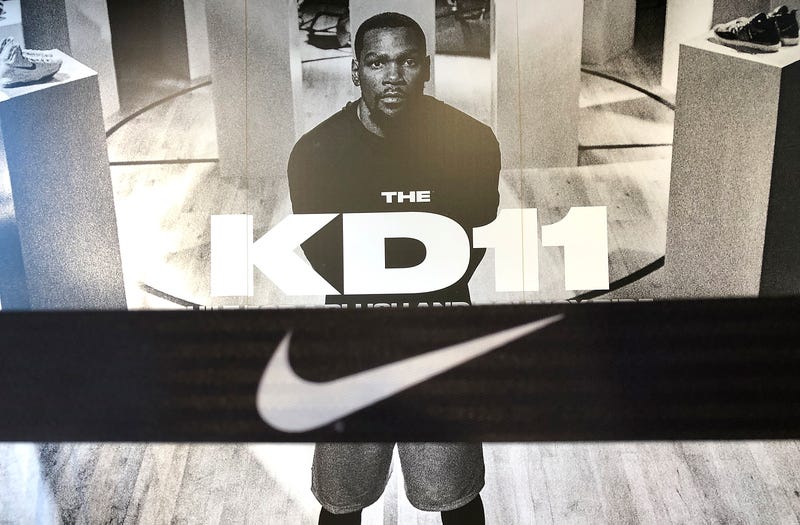 I'm glad that my 2011 KD 4s could help keep Durant on board with Nike, but I'm not alone. We're now up to the KD13, his newest sneaker in 2020, meaning that there have been waves of success each time a new shoe has come out that has kept his branch of Nike shoes flourishing, even through his injury. 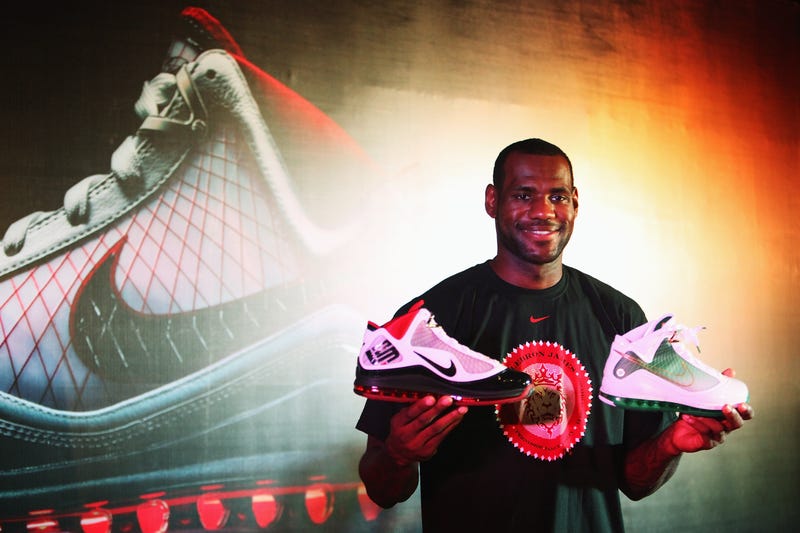 What part of basketball culture isn't dominated by LeBron today? He's the new star of Space Jam, he has his own sports media brand and his own production company, and his shoe game is elite, untouched by any other active player in the league. Though Zion Williamson's rookie shoe deal shattered LeBron's previously-held record, LeBron has moved up quite a significant amount from that initial deal, seeing as his current deal is said to be worth over $1 billion all in all (h/t Badenhausen).

At first, LeBron had to weigh between offers of $60 million from adidas, $87 million from Nike, and $115 million from Reebok (per Brian Windhorst, h/t MarketWatch). We have to think he's pretty happy he resisted the extra money from Reebok and went with Nike. 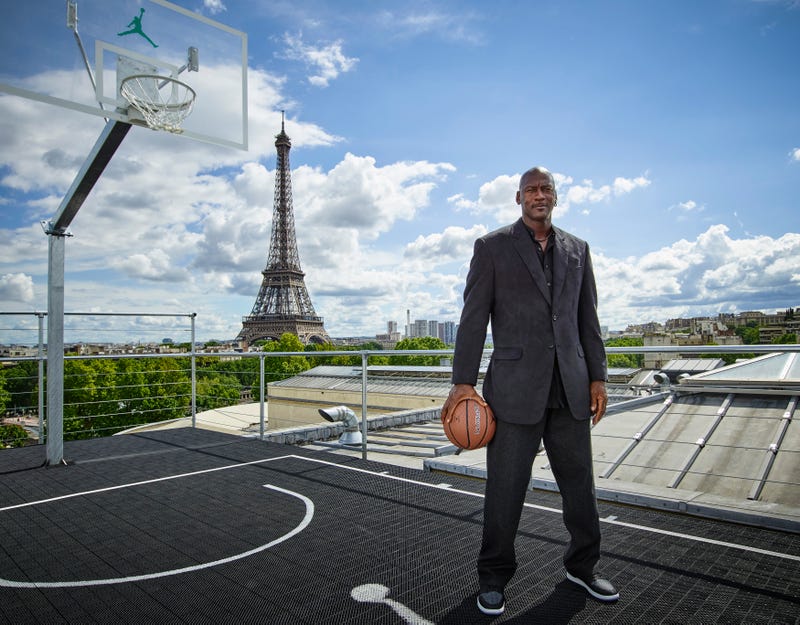 MJ's success in the shoe industry is unparalleled and was well-documented in "The Last Dance". Photo credit (Jordan Brand via Getty Images)

If Jordan were to look at this list and see his ranking compared to everyone else, I can only envision one thing: