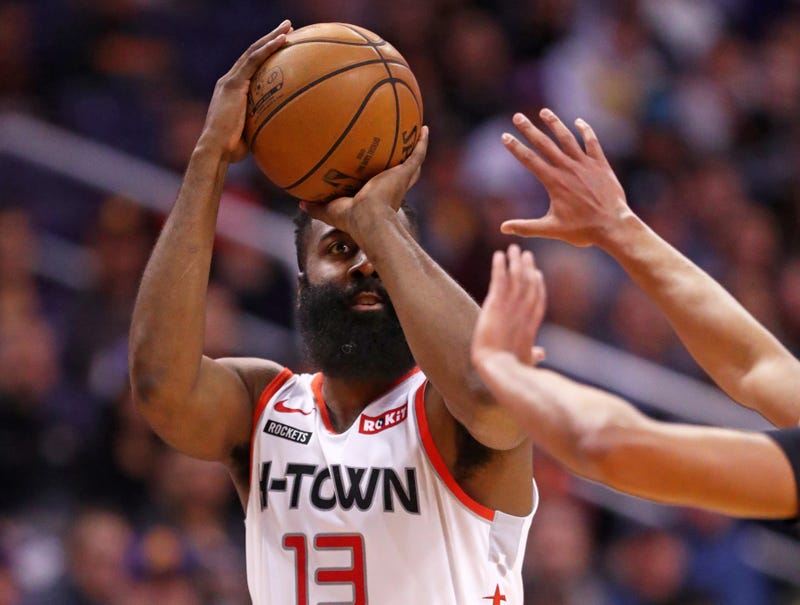 Harden definitely isn’t as much a sharpshooter as some of the other guys on this list. He has the lowest percentage of the ten guys you’ll read about below and was less accurate than several of the players who just missed the cut, like Peja Stojakovic (40.1%) and Chauncey Billups (38.7%).

However, the way Harden hits all of these tres warrants his inclusion on this list. He’s usually not a spot-up, wait-in-the-corner three-point shooter. More often than not, he has so much time to gather himself because the defender is falling down after a nasty dribble move.

Or sometimes, he doesn’t have a lot of room at all, but the iota of space he creates is sufficient from him to hoist up a deep three.

Whatever the case, Harden has chucked up and made the most three pointers in the NBA over the past three seasons and is already in the all-time top five in threes made. 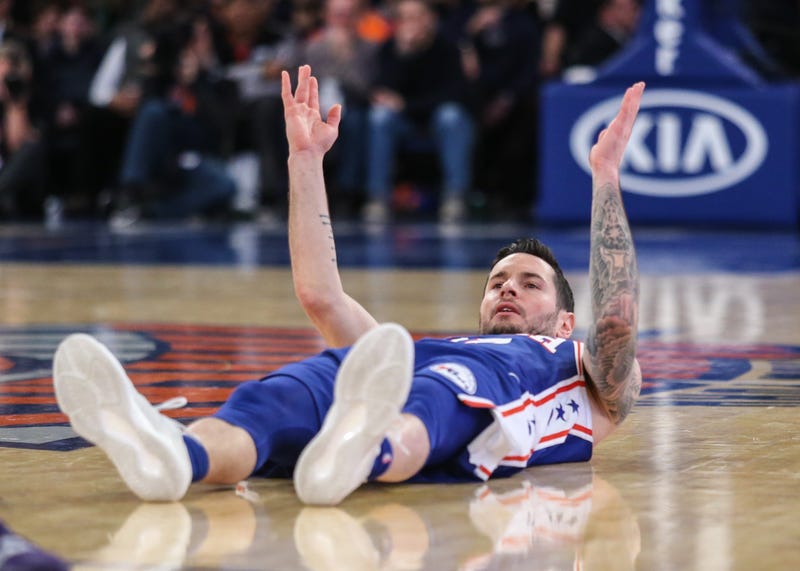 This Duke alum was known for his deep-ball prowess long before his NBA debut. In fact, he was recognized for his uncanny accuracy from range even before his Duke days.

If on-ball screeners were credited with assists after freeing up a shooter, J.J. Redick’s teammates would have been among the assist leaders year in and year out. Whether or not it looks like he has room after a screen isn’t the point, because he always has room. His quick trigger is what makes him so difficult to defend and what has led him to such success. He’s not the biggest guy in the world nor is he the greatest defender, but his confidence, focus and deadeye accuracy are the traits that have kept his career alive.

Before going down to injury this season, Redick was shooting over 45% on over six attempts per game, a feat only accomplished by (spoiler alert) according to Josh Eberley of HOOP magazine. 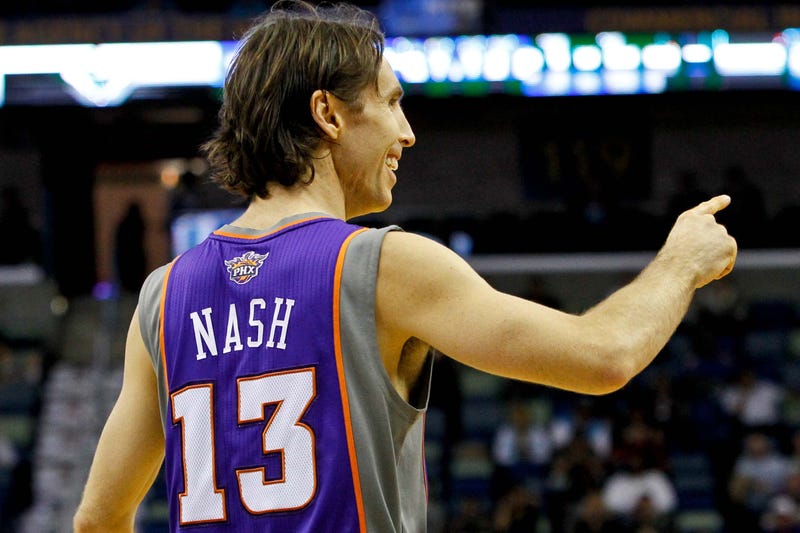 Steve Nash reacts after a play as a member of the Phoenix Suns. Photo credit USA Today

Nash was only in the top 10 in three-point makes twice in his career. Does someone with that resume really belong on a list of the greatest three-point shooters in history? He absolutely does.

His career rankings are great, but won’t blow you away, given that he’s outside the top 20 in threes made (No. 23) and threes attempted (No. 39). But he was so remarkably consistent that it’s hard not to include him. A great stat to represent this is that only one player in history (see below) has had more seasons of at least one three made per game at a 39% clip or higher. Nash did this a whopping 14 times, meaning he was almost a lock to be a valuable contributor from deep in any given game. 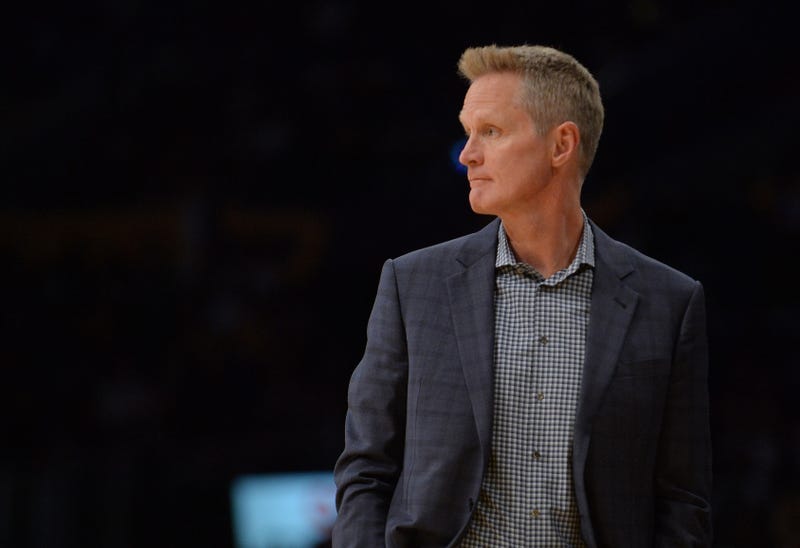 As impressive as the Splash Brothers are, maybe it’s time to give their coach some credit in their development as prolific three-point shooters. Kerr holds the NBA record for the best career 3Pt%, which isn’t something he accomplished through taking only a small sample size. The journeyman point guard hoisted up over 100 shots from deep in seven seasons, including a ridiculous 1994-95 campaign in which he converted 52.4% of his 170 tries.

Seven guys total have taken at least 100 threes and converted at least half of them. No one has done it more than once except for Kerr, who was able to accomplish the feat three separate times. This is an unfair statistic, especially when paired with Michael Jordan and Scottie Pippen, and it’s not hard to see why Kerr played a useful role as the Bulls went on to have such great success. 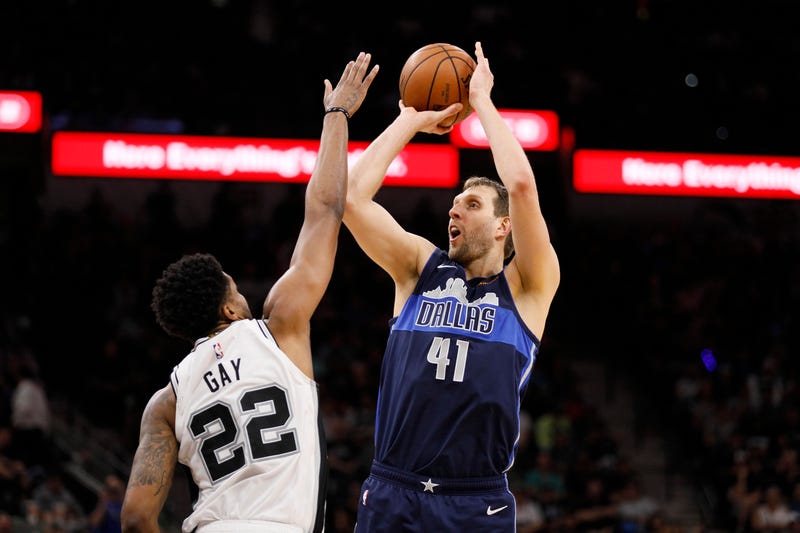 A seven-footer just shouldn’t be able to do this. It’s not supposed to work this way. But from very early on in his career -- not his rookie season, though, where he shot 20.6% from deep -- the German big has been a reliable threat from deep. Though he never averaged more than five three-pointers per game in any given season, he also shot better than 35% from long range in 18 of his 21 seasons.

He didn’t need to hit as many as he did for his accomplishments to be as impressive as they were. The fact that he was a true seven-footer alone is enough to make his three-point shooting so incredible. 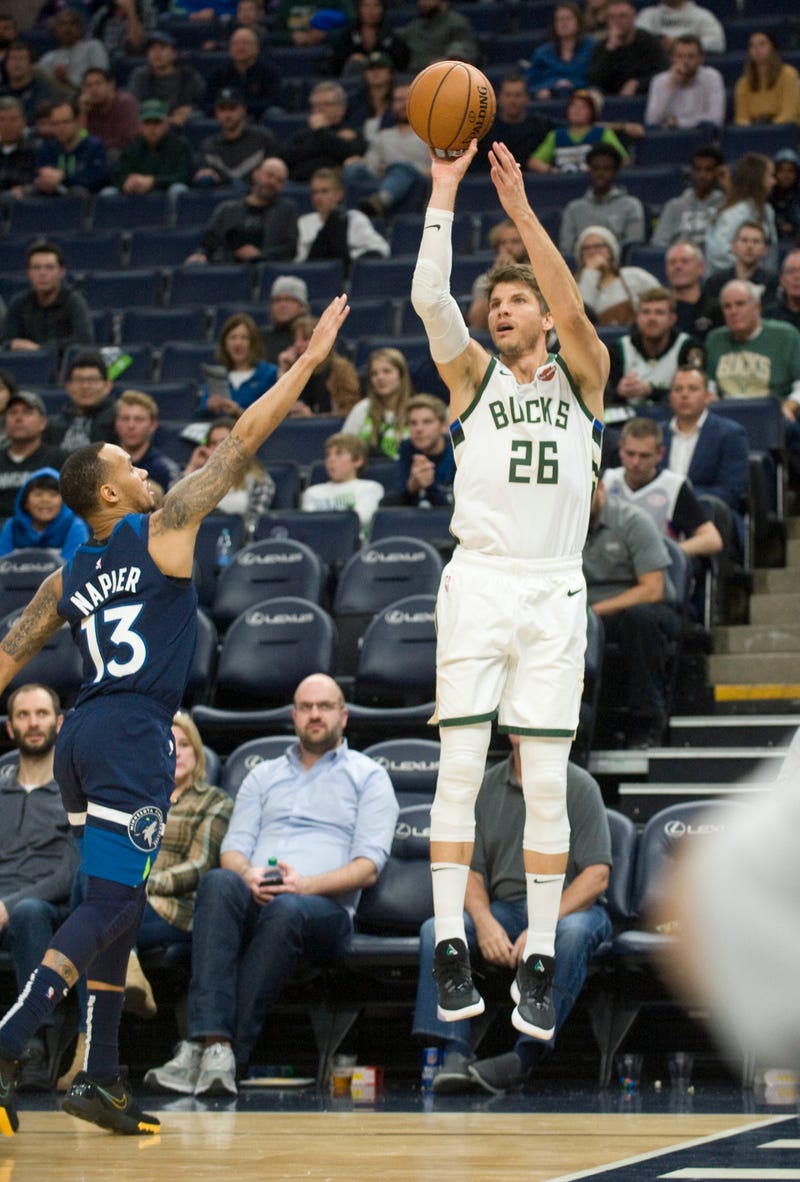 Of everyone on this list, perhaps no one has been as reliant on the three ball than Kyle Korver. This is an obscure statistic, but it helps to paint a picture of just how much Korver depends on his longball for his continued NBA success.

Of all players who average at least two made three-pointers per game throughout their career, Korver averages the least total points by a large margin. Over 60% of his career average (9.7 ppg) is made up of shots from beyond the arc. The next guy in line on that list, Ryan Anderson, averages 12.3 ppg throughout his career on 2.0 made threes, meaning less than 50% of his scoring average comes from deep.

A simpler way of saying this is that the large majority of Korver’s scoring is due to his sharpshooting abilities from range, and nothing else comes to mind when you think of the Bucks shooting guard. Milwaukee fans are hopeful that he can share some of that magic with Giannis in the near future. 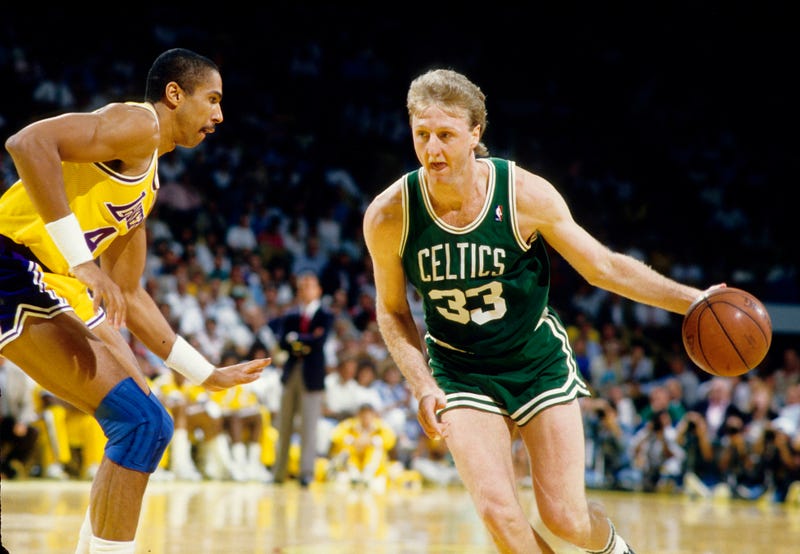 The all-time leader in three pointers from 1985 to 1988, Bird was the first true sharpshooter after the league incorporated the three-point line in the 1979-80 season. Larry Legend’s height, like Nowtizki’s, should not be ignored. Most three-point specialists aren’t hauling in 10 rebounds on any given night, but this was Bird’s average throughout his entire career.

It’s important to know that players did not generally shoot threes at all during Bird’s era which is why he’s a must-have on this list. For example, in his 1985-86 MVP season in which he led the league with 194 three-point attempts, there were six teams that attempted less threes as a whole. His innovative playstyle that allowed the Celtics to stretch the floor and realize the potency of the three ball is more important than how many he ended up making. Would he have played in today’s game, you can bet that those totals would have been a lot higher. 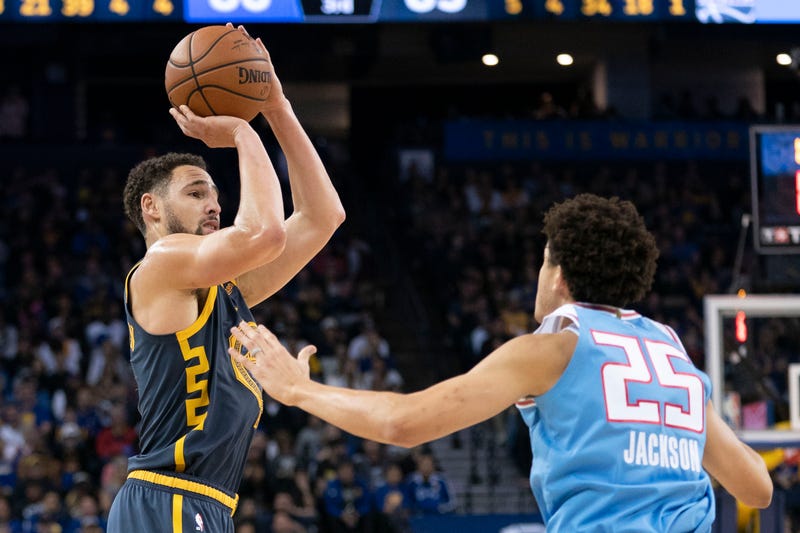 The Luigi of the Splash Bros., if you will, deserves much more recognition than he currently receives solely because of the other Splash Bro’s presence. But Klay has done some really impressive things in his own right and holds a number of records, including:

After only eight seasons (and one unfortunately curtailed by a torn ACL) he is well on his way to rewriting several of the three point record books -- if his teammate doesn’t get there first. 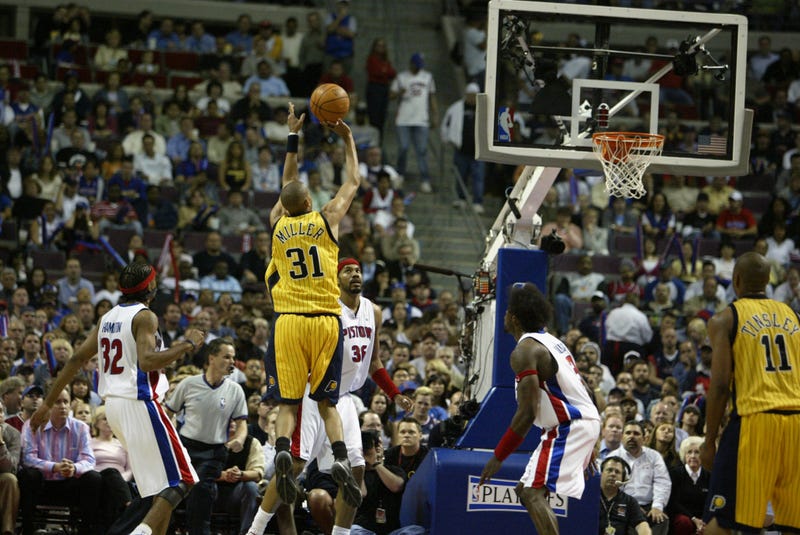 The top three members of this list were pretty obvious, but the way in which they’re ordered is where it gets interesting. Miller, currently second all-time in three pointers made, doesn’t get the second spot for a number of reasons. Unfortunately, none of those reasons are ones he can help himself, as it’s more of a testament to the guys above him.

Reggie Miller reminded the Knicks, Spike Lee—everyone—just how great of a shooter he is #OTD 24 years ago 👌

Still, Miller was as lethal as anyone in NBA history from deep, and he did it at a time before it was as massively popular as it is today. He’ll forever be remembered for his courtside beef with Spike Lee, and it’s fitting that the entire rivalry was settled on his clutch, long-range shots. 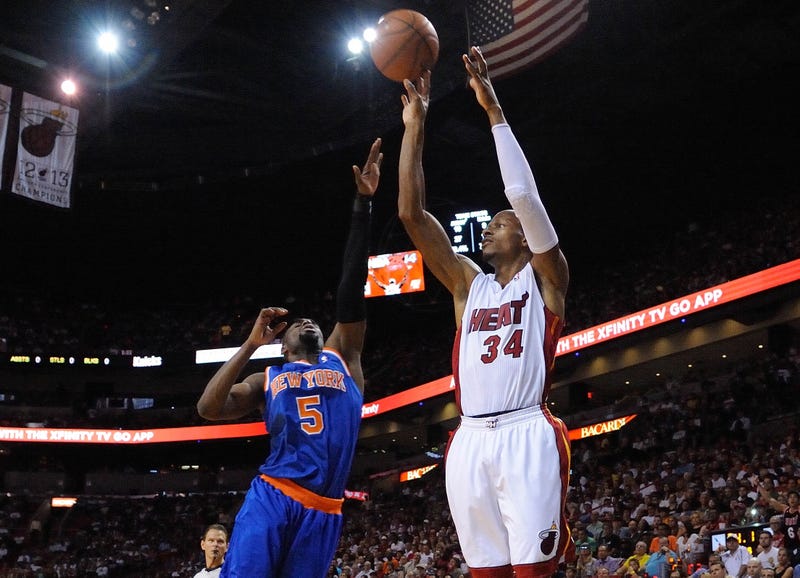 Would you believe me if I told you that Ray Allen took part in an All-Star weekend Slam Dunk Contest? In 1997, as a rookie in Milwaukee, Allen did indeed show off some of his athleticism. It’s pretty crazy that some of his athleticism and other attributes are completely under the radar because everyone associates him with one thing: the three-pointer.

The all-time leader in made tres, he attempted at least four per game in every season but his rookie year, led the league in makes three times and was more than just a specialist given his 10 All-Star nods. And who can forget the most famous shot of his career, and perhaps the most famous three-pointer of all time?

6 years ago today, Ray Allen "saved" the Miami Heat with this three in GM6 of the 2013 NBA Finals! https://t.co/ywfGhwtgT8 pic.twitter.com/4vPR0Ze3Fr 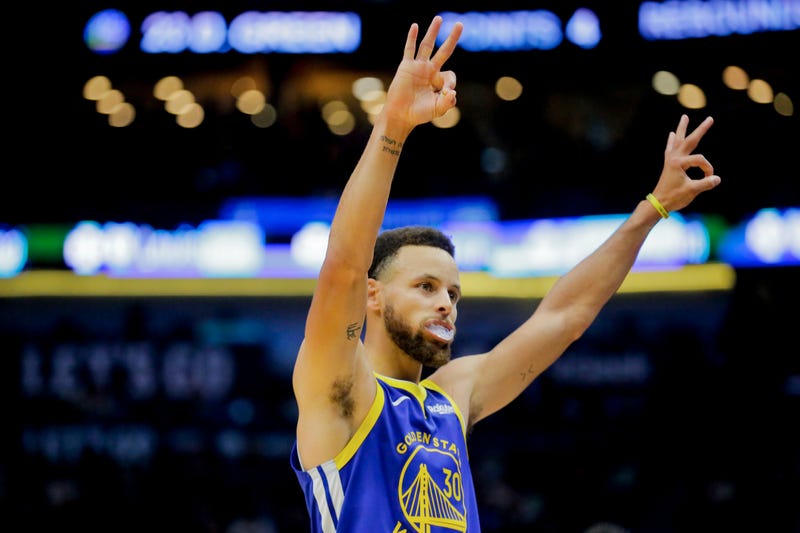 To answer the headline of this article: yes, Steph Curry should be viewed as the most prolific three point shooter of all time. He’s insane. He has recorded a 3Pt. percentage of 41% or higher in every full season of his career so far, not counting the four games he played in 2019 before a broken hand. And sure, he’s got a ways to go before he catches Allen, but he has also played in 600 fewer games than Allen. If he doesn’t reach 3,000 threes in the next couple of years, it would come as a major surprise and probably signal that there’s something seriously wrong with his hand.

Curry has five of the top-ten single season three-point totals, including the record of 402 that he set in the 2015-16 season. He led the league for five straight years between 2012-13 and 2016-17. He’s one of two players with 13 three pointers in a game, had 12 on a separate occasion and has knocked down 11 in six separate instances. Perhaps the craziest showing of the above was his 12-tre outing in which he hit this shot.

Steph Curry made 12 three-pointers against the Westbrook-Durant Oklahoma City Thunder, including this game-winning DAGGER from way beyond the line to win the game in OT. pic.twitter.com/ifh8g8FeO3

Are you kidding me? There can’t be another answer. Steph Curry is indeed the greatest three-point shooter of all time.