At the outset of this decade, LeBron James was still in his first stint with the Cleveland Cavaliers, was coming off of his second consecutive NBA MVP Award and had only appeared in the NBA Finals once. He’ll leave the decade as a four-time league MVP, three-time NBA Champion and almost inarguably one of the five best players in NBA history.

NBA.com has added to James’ rich legacy, as he headlines their 2010’s All-Decade first team. Every season this decade, James was an All-Star and named to the All-NBA team, with 2010 and 2019 the only two years he didn’t lead his team to an NBA Finals berth.

After four seasons in South Beach, James returned to Cleveland, where the Cavaliers appeared in the NBA Finals all four seasons of his second stint. In 2016-17, James led the Cavs back from a 3-1 deficit to the Golden State Warriors in the NBA Finals, winning his third NBA Finals MVP and helping to end 52-year championship drought among Cleveland’s major professional sports teams.

While James dominated the NBA this decade, Kevin Durant established himself as an all-time great, averaging 28 points-per-game, 7.4 rebounds per contest and nearly four-and-a-half assists per game. That earned him a spot on the team as well.

Durant’s Oklahoma City Thunder - which also included Russell Westbrook and James Harden - lost to James and the Heat in five games in the 2011-12 NBA Finals. Though the Thunder appeared likely to become a mainstay in the NBA Finals, they never made it back to the series with Durant and Westbrook. 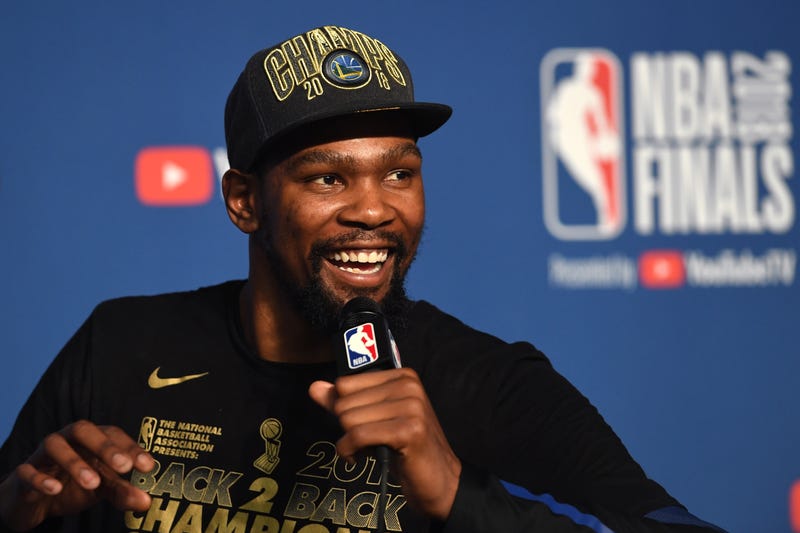 After blowing a 3-1 lead to the Golden State Warriors in the 2015-16 Western Conference Finals, Durant made the controversial decision to join the Warriors ahead of the 2016-17 season. For as much blowback as Durant may have received for his “next chapter,” his three seasons in Golden State were wildly successful, as he won his first two NBA titles and was the NBA Finals MVP in both 2017 and 2018.

Of course, one of the reasons the Warriors were such an attractive destination for Durant was the presence of Steph Curry. Though Curry may not be in the class of James and Durant all-time, he had the biggest impact this decade on how the sport was played. From beyond the arc, Curry shot nearly 40 percent this decade, creating a lane as the greatest three-point shooter in the history of the sport and making three-point shooting sexy.

Though not always the best individual player on his team, Curry was the face of the decade’s best team - the Golden State Warriors. Coming into this decade, the Warriors hadn’t appeared in the NBA Finals since the 1974-75 season, when Rick Barry led them to an NBA Finals victory. The Warriors ended the 2010s having won five consecutive Western Conference titles and three NBA Championships in the decade. Multiple Warriors teams this decade forced their way into the discussion for best team in NBA history, all of which employed Curry.

Kawhi Leonard may be most remembered this decade for his quirky personality, but he’s also a two-time NBA Finals MVP that ended the Miami Heat’s mini-dynasty and may have helped to kill off the Warriors dynasty as well. Still just 28, Leonard led the Toronto Raptors to an NBA title in 2018-19, five years after leading Gregg Popovich and the San Antonio Spurs to their fifth title. He and James are the only two players to lead two different franchises to NBA titles this decade, which is perhaps fitting in a decade defined by player movement.

Finally, the aforementioned Harden rounded out the 2010s All-Decade team, edging out Westbrook, who will once again be his teammate in 2019-20. While there's a debate to be had about how aesthetically pleasing or likely to lead to a championship Harden's style is, this is indisputable - he's one of the better scorers in NBA history. Harden made the All-NBA team six times this decade, while averaging 24.3 points per game with the Thunder and Houston Rockets.