Long before he purchased his beloved Dallas Mavericks or appeared on the hit TV show Shark Tank, Mark Cuban was merely a 30-something millionaire with too much time on his hands and a lifetime pass for airline travel.

In a wide-ranging interview on RADIO.com's "Scal & Pals" on Thursday, Cuban opened up about a host of topics, including the return of NBA action, a potential presidential bid -- and an unlikely midlife odyssey that gave the tech entrepreneur a front-row seat to one of the greatest lineups assembled in the history of team sports. 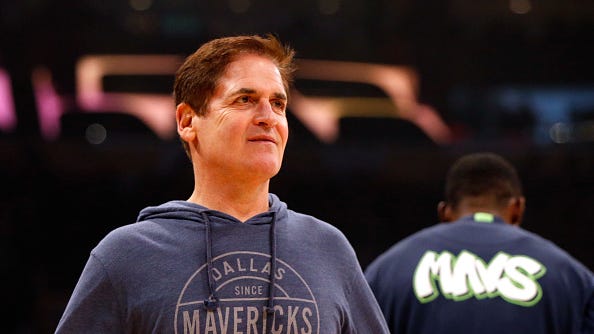 It was the early 1990s at the outset of Cuban's journey. He had just retired as a newly minted millionaire, having spent the previous seven years building up his tech startup, MicroSolutions, without so much as "taking a vacation," as he tells it. Cuban had recently sold the firm to CompuServe in a deal that netted him about $2 million.

"I bought a lifetime pass on American Airlines, and my only job in life at this point in time was to travel the world and party with as many human begins as I possibly could, just live like a rock star. And I got really good at it."

During this debauched period, as Cuban tells it, he and a friend spontaneously hatched a plan to attend a sporting event that would be on the short list for most fans.

"This was back in '92, during the Olympics. A buddy of mine called me up and said, 'Look you have this lifetime pass on American Airlines that you bought, and we could just get on a plane and go to Barcelona. Let's go, and we'll see if we can get into a game.'

"So we literally just got on a plane the next day, went to Barcelona," Cuban said.

But that's where things hit a snag.

"We thought we were being slick, scalping tickets to the Dream Team to watch them play. Well, it turns out we bought fake tickets. So we get in, we got in the door. We're sitting down, getting ready to watch Charles and Michael and everybody, thinking this is the best thing ever.

"Then we get kicked out, but they were nice. And they found other seats for us, and we got to watch the Dream Team."

The merciful treatment toward Cuban and his pal certainly harkens to a different era in sports, and indeed the world, with respect to how security figures interact with fans.

Perhaps it is fitting, then, that Cuban associates his version of the American Dream, an unusually fortuitous one, with the original Dream Team--the first and best one, the idealized one that is long gone and seemingly as mythical as the historical moment to which it belongs.

"So I went in the period of a long time -- I went seven years without a vacation, sold my company, bought a lifetime pass on American Airlines, and bam was watching the Dream Team. That's how I got started."