Will the back-to-back MVP club extend its ranks to 12 members?

Will we see a record-breaking Rookie of the Year campaign?

The unofficial halfway point in the season -- which really isn’t halfway at all -- marks a good time to look at the top performers and break down who is likely to add some hardware to their careers.

Here are some of the top options in each of the NBA award races. 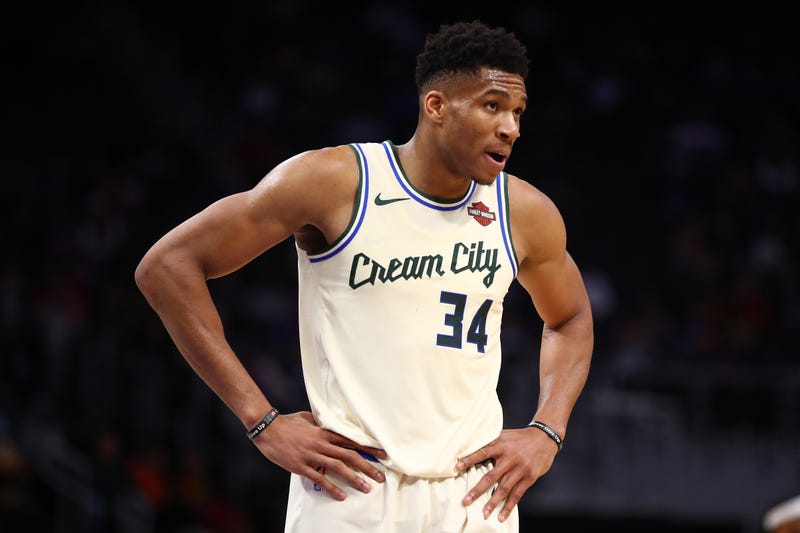 Zero. Zero is the number of players that have recorded 30 points per game in the same season as they’ve posted a defensive rating below 100 (an estimated number of the amount of points an opponent scores while that player is on the court) since 1980.

David Robinson (29.8 PPG), Shaquille O’Neal (29.7) and Karl Malone (29.1) all came close. But nobody has ever posted 30 points per game while displaying such defensive dominance. Sure, being on the Bucks helps, but the team’s defensive rating goes up to 105 when he’s off the floor. He currently leads the NBA with a 97 defensive rating; the league-average scoring per 100 possessions is 110 points.

He’s annihilating opposing teams on both sides of the court, and has somehow improved upon his 2018-19 MVP campaign in which he posted 27.7 PPG, 12.5 RPG and 5.9 APG with 2019-20 averages of 30.0/13.5/5.8 and a significant increase in his three-point percentage.  His per-36 minute numbers are even more impressive, as he’s often subbed out early in the game because of the blowout nature of many Bucks games.

Thus, he’s leading the league in player efficiency rating and box plus/minus, both of which, in layman’s terms, are attempts at evaluating players’ contributions in a neutral fashion. He’s now the heavy favorite in the sports betting world, as well, with a -455 line (according to DraftKings).

LeBron actually isn’t the runner up, according to DraftKings. At 9-to-1 odds, he sits behind Luke Doncic (8-to-1) in the race.

But in my eyes, King James deserves to be considered more seriously than Doncic and it boils down to his age. It is extremely impressive that Doncic is playing at an MVP-caliber level at age 20. In fact, it’s one of the most impressive campaigns ever for a 20-year-old, perhaps surpassing even King James in his age-20 season:

But what LeBron James is doing at age 35 is un-be-lievable. Only two players have averaged 25 points per game at or after age 35: Karl Malone and Alex English. Only one player has averaged double-digit assists at or after age 35: Steve Nash (3x, 2009-2012). And no one has done both. No one has even come close to doing both (Lenny Wilkens had 20.5 PPG and 8.4 APG in 1972-73, and is probably the closest to ever achieving this).

Sure, these specific statistical boundaries that I’ve selected fit what LeBron is doing this year. But it doesn’t take away from the absolute brilliance that the King has flashed on the court this year. Statistics like this show why he’s so important to an even greater extent:

The version of the Lakers with AD but without LeBron is a lottery team.

The version of the Lakers with LeBron but without AD is a REALLY good team.

He somehow continues to get better and better, and it’s crazy to think that one day, inevitably, he will slow down. 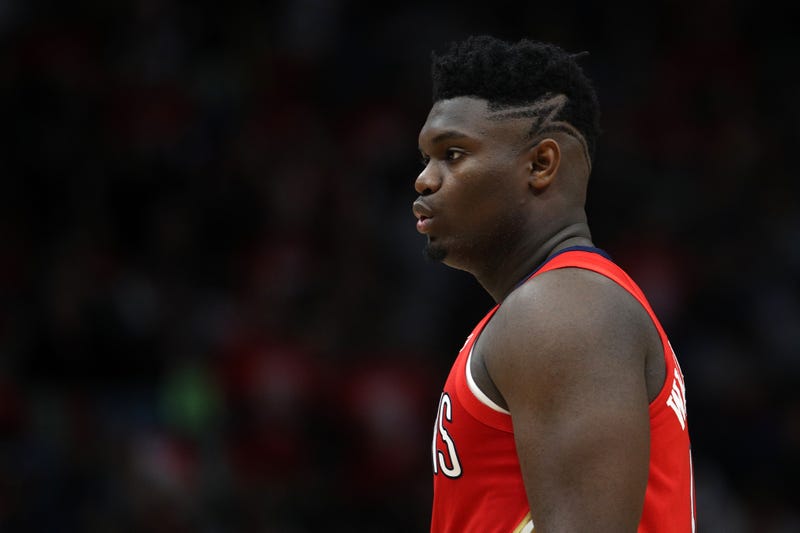 Zion Williamson has had a dynamic start to his NBA career. Photo credit (Chris Graythen/Getty Images)

Rookie of the Year

But first, the positives. The Grizzlies are competitive, which is a surprise, and it is undoubtedly because of the leadership and energy that Morant has provided for this club. He’s only had five games with fewer than 10 points, which demonstrates his consistency as a dangerous scorer. And lastly, he isn’t just a statistically intriguing player, but the way he goes about producing for the Grizzlies makes him a must-watch player. His dazzling array of dribble moves and the confidence with which he showcases his stuff would be a lot for any other rookie to overcome.

The negative has nothing to do with his own game. The negative factor in his ROTY chances is Zion Williamson.

If Ja Morant is must-see TV, then Zion Williamson is MUST-SEE TV.

What he has done throughout the first few weeks of his career is mind-boggling. He ranks at tenth in scoring throughout the first ten games in a player’s career since 1980. Every single person on the list above him, other than Terry Cummings, has played well over 300 minutes: Zion has only played 274. Converted to points per 36 minutes, Williamson is third all-time after ten games: only Cummings and Joel Embiid are higher.

So though his stats so far seem to indicate that he’s a lock for the ROTY award, the lack of playing time is really going to count against him. As I’ve previously noted, the highest number of games he’ll be able to play is 37, and no ROTY has ever played fewer than 50 games.

Read more about the race here. 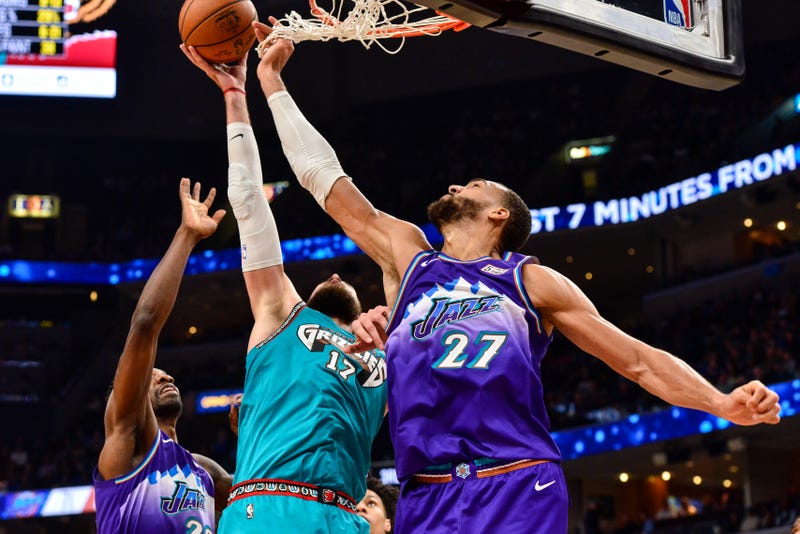 Defensive Player of the Year

The Stifle Tower. The French Rejection. Or simply, Godzilla (thanks to Basketball Reference for the stellar nicknames).

These names are all testaments to just how big a factor Rudy Gobert is on the defensive end. He has made opposing big men all but disappear. Karl-Anthony Towns, considered by many to be the pre-eminent big man in the NBA, was held to his third- and seventh-lowest scoring totals of the year against Gobert. Bam Adebayo, who has made opponents look completely helpless due to his versatility, has been held to two of his bottom-ten field goal percentages this year against the Jazz. Andre Drummond, while still on the Pistons, found himself struggling to find an easy basket against Gobert, finishing the game with a 31.3 FG% as compared to his season average of 52.8%.

And the list goes on. Though he’s currently behind Anthony Davis in DraftKings’ oddsbook, he has more defensive win shares and a better defensive box plus/minus than the Lakers big.

But the Brow is a formidable foe in the race and may very well come out on top. The three-time blocks leader is ahead of Gobert in both blocks and steals, and has a higher defensive rating than the French jazz center. His best defensive game this year is more impressive than Gobert’s.

AD rejected the Detroit Pistons not once, not twice, but eight times in what was actually a close game. Just seven points separated the Lakers and the Pistons: seven points that could very easily have been scored by Andre Drummond, had he not gone 2-for-13 from the field in a frustrating effort. That showcases the pure dominance that Davis is capable of in the low post.

One troubling stat, however, is Anthony Davis’s on-off split. The defense actually allows fewer points per 100 possessions when Davis is off the court than when he’s on. And yes, game flow can dictate how this goes, as Davis may not be on the court for a long stretch given that the game is out of reach and both teams have their backups playing.

But Gobert’s defensive presence means much more to the Jazz based on this metric. The Jazz hold their opponents to nearly seven fewer points per 100 possessions when he’s on the court rather than when he’s off. Advantage: Gobert. 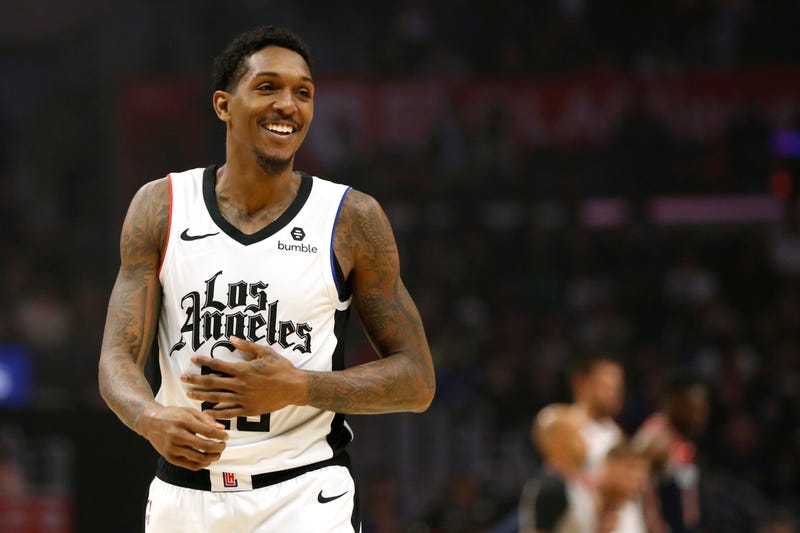 Sixth Man of the Year

Arguably the greatest sixth man of all time, Williams is as reliable as it gets year after year. His role has not changed the slightest bit since joining the Clippers, and Doc Rivers has carved out a perfect niche for him to thrive. His assist totals are up a little bit, and he may finish with six per game in the first time of his entire career. His scoring can easily exceed 20 points as well, though he’s just a hair shy of that average right now (19.5).

Should he cross both of these boundaries, he’ll be the founding member of a club. Only four players who started fewer than 15 games in a season but played in at least 60 have ever averaged at least 20 points per game (one of those is Williams), and only three have averaged six assists. Doing both would be quite a notable feat.

Teammate Montrezl Harrell is also a legitimate candidate to win the award, but being on the same team as Williams hurts his chances.

The Thunder came close to unlocking Schroder’s potential last season. They seem to have fully figured it out this year.

Schroder is right near the 20 points per game threshold, and is achieving career highs in FG% (47.2) and three-point FG% (38.7). Though his assist numbers are down, he’s embraced his role as a bench scorer that won’t be likely to explode for 50 points, but is a consistent threat on any given night to help the Thunder -- a team that doesn’t have a definitive go-to scorer, with four players between 17 and 20 points per game -- give their starters a breather.

He also helps out defensively, as the Thunder surrender 118 points per 100 possessions when he’s off the floor, and only 105 when he’s on (granted, that may be due to bench players being in the game). 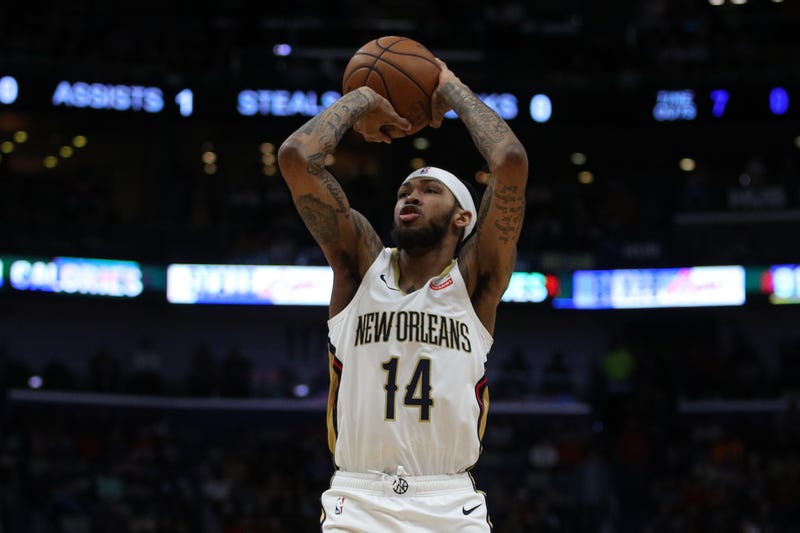 Ingram was solid, if a little disappointing, throughout his three years in Los Angeles. But after seeing the transformation he’s made in his first year in New Orleans, it appears as though he really is the guy the Lakers expected him to be after selecting him second overall in the draft.

He averaged only two three-point attempts per game throughout his Lakers career but is taking 6.3 shots from deep per contest with the Pelicans. He’s making it rain, too, at a 40% clip. In nearly the same playing time as the past two seasons, he is averaging nearly seven more points per game, where he ranks in the top 15 (24.9 PPG).

With two 40-point outings under his belt and continued production since the debut of Zion Williamson -- an arrival that felt certain to hurt Ingram’s production -- he seems like the most deserving recipient of this award, even in a crowded field.

An incredible backstory sets the tone for Graham’s rise to prominence in his second season. His upbringing, shared by Bleacher Report writer Jonathan Abrams, was an interesting one, as his mother gave birth to him at age 14 and he was always undersized as he grew up and developed his skill set.

His inspirational background shows us that we could have seen this emergence coming, but that doesn’t make it any less exciting to watch as it unfolds. Immediately thrust into a large role, the 24-year-old has had 17 20-point games and 17 double-digit assist performances. He wasn’t able to accomplish either of those feats last season.

Now, it’s a regular thing, and we shouldn’t take that for granted. Instead, we should seriously consider that when weighing him against the other candidates for this award. Brandon Ingram was a known player last season. Luka Doncic, another popular option, was the Rookie of the Year, for crying out loud.

But Graham has emerged out of seemingly nowhere -- especially because he was on a small market team in the Hornets -- and is taking the league by storm.