Last year’s Rookie of the Year race was intriguing… kind of. It was intriguing in that there were two players who became bonafide superstars in this league as soon as they stepped on the court, in Luka Dončić and Trae Young.

Young especially erupted after the All-Star break, averaging 24.7 points, 4.7 rebounds and 9.2 assists per game from then until the end of the season. Predictions began to swing back and forth between the two candidates during an especially hot run in which Young averaged 35 points over a five-game stretch right out of the break.

As a whole, though, Dončić’s impressive maturity, consistency and knack for the clutch shot throughout the season earned him all but two first-place votes in the race and gave him a convincing win. It was largely a two-man race, and this year looks to be no different in that light.

But the players involved in the race are very different from Dončić and Young, adding intrigue to what should become a much closer finish come April. The rest of the rookies shouldn’t be ignored: though they realistically aren’t in the running for the award, they have impressed from the start and promise a ton of potential. Here are the current rankings of the ROTY candidates. 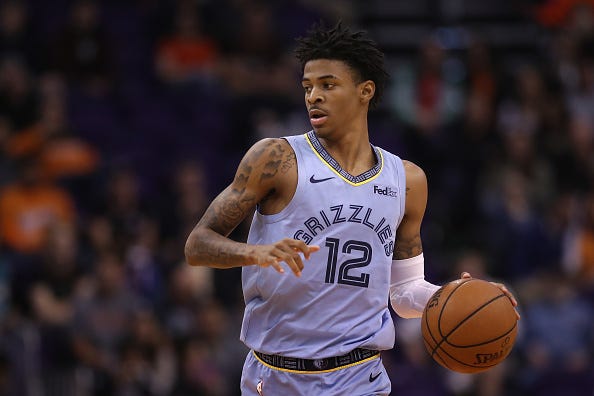 The Grizzlies were supposed to be one of the weakest teams in the league, though everyone was excited to see what the No. 2 overall pick would bring to the city that had been stuck with a disappointing, if not even a little boring, brand of basketball for years.

It’s not that the seven consecutive playoff appearances between 2010 and 2017 were difficult for fans to enjoy. But they never had the flare or the star power from guys like Marc Gasol, Mike Conley and Zach Randolph that other teams were able to enjoy.

Ja Morant has changed things in a big way. A perfect example of the new-brand Grizzlies, led by Morant and Jaren Jackson Jr., is how they reacted to “teammate” Andre Iguodala’s constant complaints about playing in Memphis.

It’s not all about flare, though, and Morant has showcased incredible displays of basketball talent, leading to a very real chance that the Grizzlies make a playoff appearance (as of February 12, the Grizzlies are the eighth seed in the West). He’s leading all rookies in assists per game (7.0), is second in scoring (17.6) and steals (1.0), and has a top-10 true shooting percentage (.573).

The only rookie with 20 games of 20+ points, the fact that he’s played the whole season will likely give him the edge over the next candidate. He should be considered the odds-on favorite at the present time. 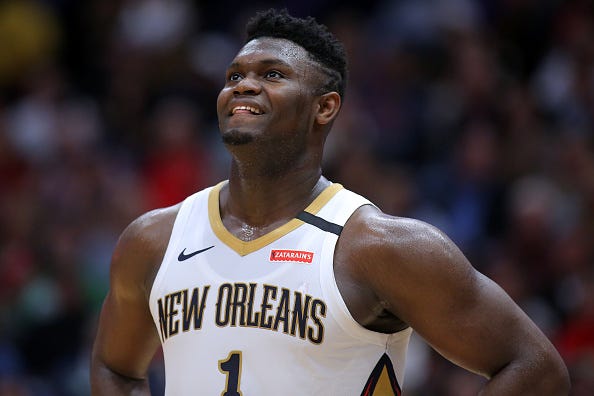 Missing as many games as Zion has doesn’t seem to bode well for his chances at the award. But Zion’s a special player, and this is a year where one rookie hasn’t completely blown the top off of the competition, as impressive as Ja Morant has been.

The most games he’ll be able to play this season is 37, and it’s well within reason to assume that he’ll miss a few more games along the way. The ROTY winners with the least games played are Patrick Ewing (50 games), Vince Carter (50) and Kyrie Irving (51). Ewing was much more impactful on the floor than runner-up Xavier McDaniel, Vince Carter’s debut occurred during the 50-game 1999 lockout season and Irving won the award during another lockout without another realistic contender.

Along with Ewing, the most comparable situation may be that of Joel Embiid, who garnered 23 first-place votes and finished in third after playing only 31 games in 2017. That occurred during a relatively weak year, where Ja Morant surely would have taken home the prize over the season’s actual winner, Malcolm Brogdon.

The fact that Zion has done enough in only nine games to warrant serious consideration is a statement in itself. He’s must-see TV every single time he’s on the floor and is living up to the hype with a flurry of athletic finishes and impressive highlights in the small sample size. The stats accurately portray his dominance: he’s in the NBA top-10 in scoring per 36 minutes (min. 20 minutes per game) and seems to stack up with not only the best rookies, but the best players in the entire league.

Should he continue at this rate, it would not come as a surprise if Williamson overtakes Morant in the race despite the huge chunk of playing time he missed early in the season. It wouldn’t be a bad time to play the odds and hope his health is no longer a hindrance. 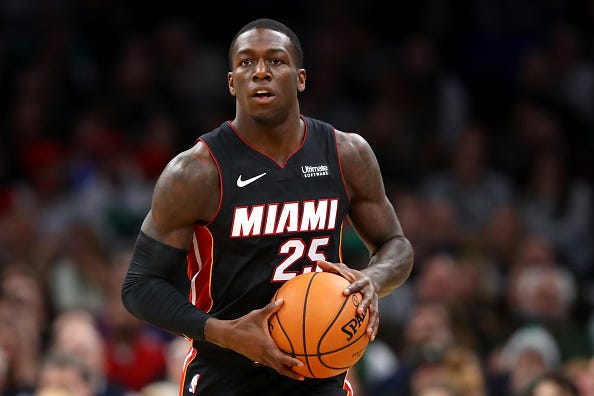 Kendrick Nunn was not supposed to factor into the Rookie of the Year race.

The lowest draft pick to ever win the ROTY award was Malcolm Brogdon, taken at No. 36 in the 2016 draft. Kendrick Nunn wasn’t taken lower than Brogdon, but that’s because Nunn wasn’t drafted at all.

He’s not playing like someone who didn’t warrant a draft pick, though. Immediately making an impact with a 24-point debut, Nunn has scored 20 points in 13 games this season and has led the Heat to an 11-2 record in those displays. When Nunn is on, the Heat are on, and that’s the case more often than not. He ranks third among all rookies in scoring with 15.4 points per game.

He has nearly twice as many assists as he has turnovers, displaying good ball security and discipline for a first-year player. His efficiency is another solid attribute, though there is room for improvement. Hopefully, he’ll be able to bounce back from his recent struggles that seemed to come as a result of an Achilles injury. 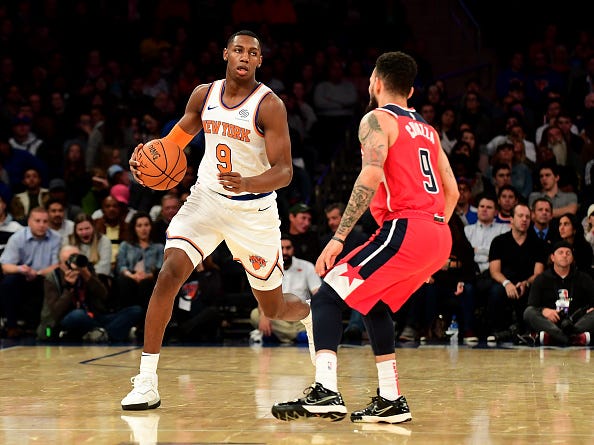 The third overall draft pick has not been able to grant the Knicks much team success, but that’s hardly his fault given his supporting cast. Immediately thrust into a huge role, Barrett has been streaky when healthy -- like when he scored 27 points on 10-for-13 shooting and followed up that dazzling display with a two-point, 1-for-10 performance -- and he recently dealt with an ankle injury that kept him out for a couple weeks.

Still, the Knicks should be excited that they have a talent like Barrett in their ranks. With Marcus Morris out of town, he could become the franchise’s go-to scorer for the foreseeable future and will have plenty of time to develop while the Knicks work on spending their enormous cap space to build a competent roster.

It will be interesting to see how Barrett is deployed in the second half. As important as it is to let Barrett develop, the injury issues of late could be a reason to consider lowering his workload a little bit as the season progresses. 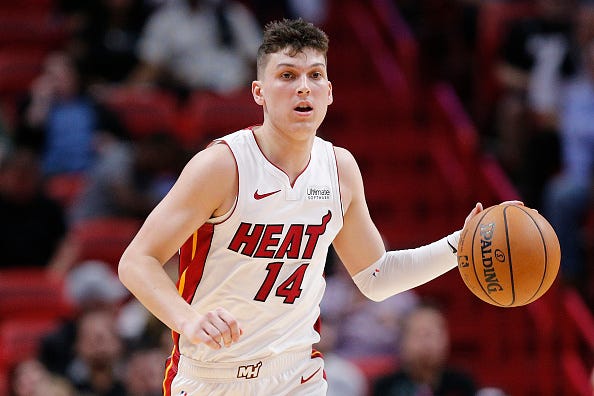 Though Herro has been overshadowed by teammate Kendrick Nunn in the rookie race, he had a larger spotlight on him to start the year and has definitely played up to expectation. Herro was drafted with the hope that he could carry his elite shooting prowess -- not to mention his impeccable free throw shooting -- to the NBA.

His free throw percentage has gone down 10 whole points from his only year of college hoops and is still at a very respectable 83.5%. More importantly, though, his three-point accuracy has increased from 35% to 39%, placing him in very impressive standing among NBA rookies in recent history.

Should he keep up this shooting performance, Herro will be one of five rookies since 2000 to shoot above 39% from beyond the arc while attempting more than five threes per game and his scoring average of 13.1 points per game puts him at the top of that list.

An ankle injury has kept him out as of late, but the Heat rely on his shooting all throughout the game and he’s never afraid to take a big shot.

The Gonzaga alum has been able to use his powerful frame for some big games, including a 27-point outburst against a prominent 76ers interior defense.

Only one player has hit seven three-pointers in his NBA debut, and it occurred this year when Washington dropped 27 on an unsuspecting Bulls team for a win.

It took a while for Porter Jr. to make his debut as he was forced to sit out for the entirety of 2018-2019. It took him a while to get acclimated to his NBA surroundings this year and to log some regular minutes. But before another injury ended his hot streak, he went on a tear in which he averaged 14.7 points and 9.0 rebounds over a ten-game stretch, all while shooting a scorching 51.2% from deep.

Thybulle’s offense is a problem that he’ll need to develop if he wants to become a starting-caliber player. Luckily, he’ll never have to face himself on defense, where he is an absolute terror for opponents. His 1.4 steals per game leads all rookies in just over 20 minutes of action.

Garland shook off a cold start to his career and began to find his footing in mid-December before going on a run of 15 games where he scored in double figures.

The offense is there on a consistent basis, and Hunter has also shown off his defensive chops with two games in which he’s racked up five steals.