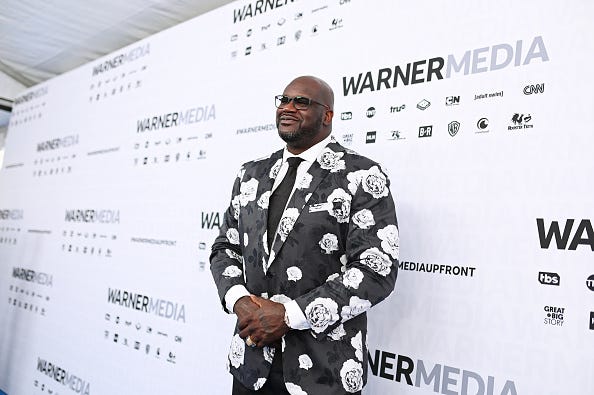 Shaquille O’Neal his unloading one of his lavish properties.

The NBA legend has put his Bell Canyon, California estate on the market for $2.5 million, according to CNBC.

The five-bedroom, four-and-a-half bath house is located in a gated community in Simi Hills, which is just outside the Los Angeles County line in Ventura County. It’s also not very far from Kim Kardashian and Kanye West’s compound in nearby Hidden Hills.

The contemporary home has an open floor plan and a two-story foyer with vaulted beamed ceilings that features artwork and trophies honoring the former Los Angeles Laker.

On the first floor, you'll find a family room, a wet bar, a media room decked out with a painting of Tupac Shakur, a laundry room, an office and one guest bedroom.

The massive kitchen has marble countertops and custom cabinetry and opens up to two dining rooms, one of which features a tribute to late rapper Nipsey Hussle.

Throughout the property you’ll find other artwork highlighting pop culture icons like Notorious B.I.G., “The Godfather” and even Bugs Bunny.

Heading upstairs is the master suite, which comes loaded with dual walk-in closets, a fireplace, a rain shower and jacuzzi bathtub. There’s also a second bedroom with its own ensuite bathroom. Two other smaller bedrooms share a bath and jacuzzi tub.

The outdoor space will let you entertain like a baller as it includes a heated pool, jacuzzi, and fire pit sprawled across one acre of manicured land.

While his California property is plush by normal standards, it pales in comparison to his enormous 35,000 square-foot 12-bedroom Florida mansion.

Last year, the 47-year-old originally put the Orlando-area estate on the market for $28 million before knocking it down to a more-affordable $21.9 million.

Earlier this month, the Hall of Fame Legend continued building on his real estate empire as he unveiled a 22-story, $80 million high-rise apartment building in Newark, New Jersey, which he helped develop.

If Shaq’s Los Angeles property is out of your price range, a rental studio apartment in his Jersey building, which has views of New York City,  can be all yours starting at $1800 a month.