Week 3 of the college football season features no ranked teams playing against each other, but that does not mean a wild Saturday lies ahead.

It last happened two years ago, the weekend of Oct. 13, 2017 and it resulted in seven top-25 falling to unranked opponents, including three teams in the top-10.

So, that should serve as a fair warning to top-25 teams, as well as anyone wagering on games, to tread lightly heading into a weekend designed for upsets.

Here are the key games to watch:

Clemson is living up to expectations thus far as the best team in the country, and Syracuse is coming off an embarrassing 63-20 loss to Maryland, but don’t let any of that fool you. Syracuse has played well against Clemson under head coach Dino Babers. They upset a 6-0 Tigers squad ranked second in the country in 2017 at the Carrier Dome, and last year Clemson required a fourth quarter rally behind backup quarterback Chase Brice to lead them to a 27-23 win over the Orange. Perhaps Syracuse was looking ahead to this matchup during last week’s debacle, so don’t sleep on this game.

Clemson spreads vs. Syracuse: (one cover in the last 4 years)

There’s nothing like an in-state rivalry to get the juices flowing on a college football Saturday. Iowa heads to Ames to take on a Cyclones team that entered the season with big expectations, ranked in the top 25. Yet Iowa State fell out of the rankings by barely escaping Northern Iowa in a 29-26 triple overtime victory. But they’ve had two weeks to prepare for the Hawkeyes by coming off a bye and will embrace the home dog role with ESPN College Gameday on campus. Meanwhile, Iowa has outscored its opponents (Miami (Ohio) and Rutgers) 68-14 but perhaps face the first true test of the 2019 season in Iowa State. 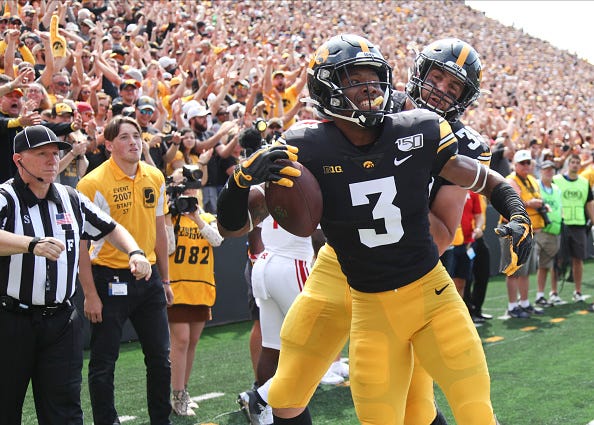 The Crimson Tide are an overwhelming favorite in this one, but the intrigue lies in the history between these two teams. Alabama has not played South Carolina since 2010, when the Gamecocks stunned the then-defending national champions. The crowd and energy will be palpable in Williams Brice Stadium, which will be a test for freshman quarterback Ryan Hilinski. Of course, South Carolina will need a little luck on their side if they want lightning to strike twice and beat Alabama again.

Nick Saban said freshman QB Ryan Hilinski played "flawlessly" in his first start and that #Gamecocks' specialists/special teams ranks "up there with anybody we've ever played against."

The guys from RADIO.COM Sports' “You Better You Bet” pointed to this game as a potential upset alert, but it would take a lot for Indiana to pull this off. For starters, Ohio State has beaten Indiana 23 consecutive times dating back to 1991. Ohio State has been one of the most balanced teams in the country, too, averaging 253.5 yards on the ground and 235 yards in the air. Indiana will have to bring its 'A' game, plus more, to win this one.