The Heisman Trophy is college football's most prestigious award, but it does not always translate into success in the NFL.

Actually, since 2000, the chances are more favorable that the Heisman Trophy winner will be a bust in the NFL. Perhaps there is a Heisman curse in play.

Of course, players like Cam Newton and Derrick Henry are proof against such a claim, and the jury is still out on recent winners like Kyler Murray, Baker Mayfield and Lamar Jackson, although the latter appears have established himself among the elite quarterbacks in the league.

Then there are players like Reggie Bush, who had a solid, long career, but did not quite live up to the Heisman-sized expectations of a No. 2 pick.

But many of the Heisman Trophy winners of the past 20 years would take Bush's career over theirs. Here are some of the biggest Heisman Trophy busts since 2000: 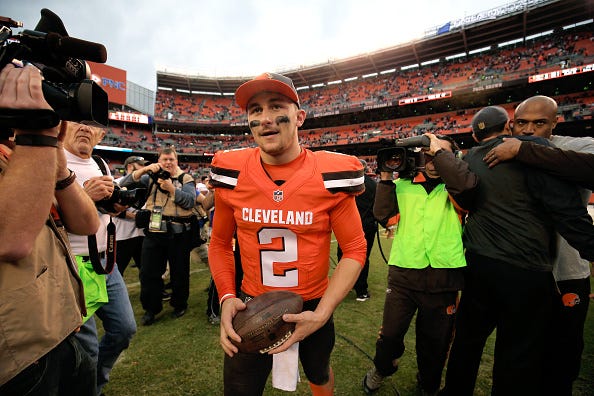 “Johnny Football” was a larger-than-life personality at Texas A&M and college football, become the first freshman to ever win the Heisman Trophy after he threw for 3,706 yards and 26 touchdowns and also rushed for 1,410 yards and 21 touchdowns. He played with bravado and arrogance while gaining a reputation as a party-boy, which rubbed some people the wrong way and made him a controversial prospect before the Cleveland Browns selected him with the 22nd overall pick in the first round.

Manziel’s larger-than-life persona would haunt him in the NFL. He was fined before he played his first career game after he gave the middle finger in a preseason loss. When Manziel got his chance he was not the same player he was in college, and his life off the field, including a domestic violence incident, led to distractions. After two seasons, Manziel was out of the NFL with just eight games to his name. Despite numerous attempts at a comeback, no team has been willing to sign him, and he is even banned from the Canadian Football League. 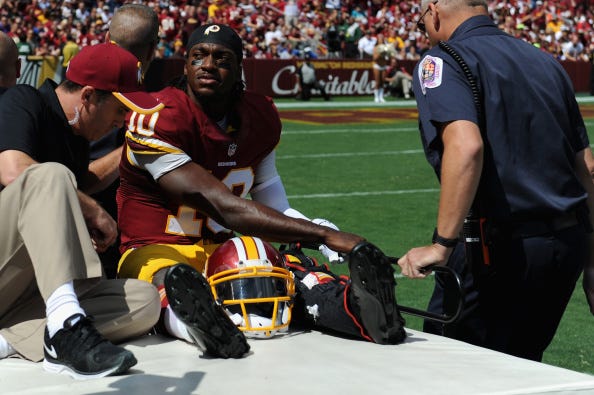 Robert Griffin III is carted off the field in 2014. Photo credit Getty Images

RGIII was one of the most exciting players to watch in college and his rookie year in the NFL. He won the Heisman Trophy in 2011 at Baylor with his dual-threat skillset, throwing for 4,293 yards and 37 touchdowns while also rushing for 699 yards and 10 touchdowns. He was taken second overall by the Washington Redskins in 2012 and was brilliant, setting rookie records en route to winning Offensive Rookie of the Year.

Then, the injuries began to happen. Griffin hurt his knee in Week 14 his rookie season before returning for the NFC Wild Card game where he tore his ACL and LCL. Controversy followed as to whether or not he was really cleared to play for the playoff game. Griffin returned by Week 1 of the 2013 season after not playing in the preseason, but was not the same player and was benched for Kirk Cousins the final three games after going 3-10. He returned as starter in 2014 before dislocating his ankle in Week 2. The injuries and struggles continued and in 2019 was Lamar Jackson’s backup with the Baltimore Ravens. 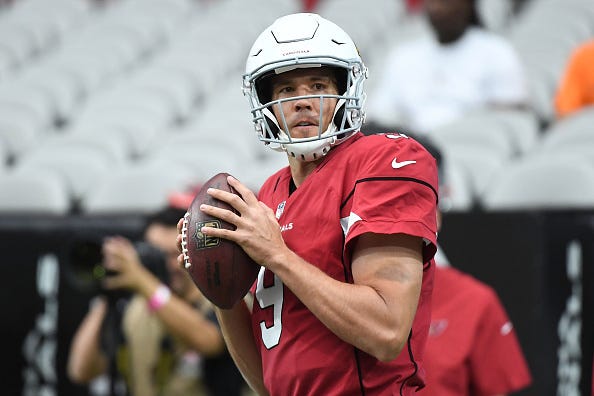 Bradford burst onto the scene early in college, winning the prestigious award as a sophomore in 2008 by throwing for 4,720 yards and 50 touchdown passes with Oklahoma. Despite being eligible for the NFL Draft, he returned for his junior season but was injured after sustaining an AC join sprain. He was still drafted No. 1 overall in 2010 NFL Draft by the then-St. Louis Rams, but in an era that saw quarterback stats boom, Bradford has been kind of a dud. Injuries began to take its toll on Bradford and became relegated to a backup/journeyman despite scoring a nice second contract, and never materialized as the Heisman Trophy-winning No. 1 pick. 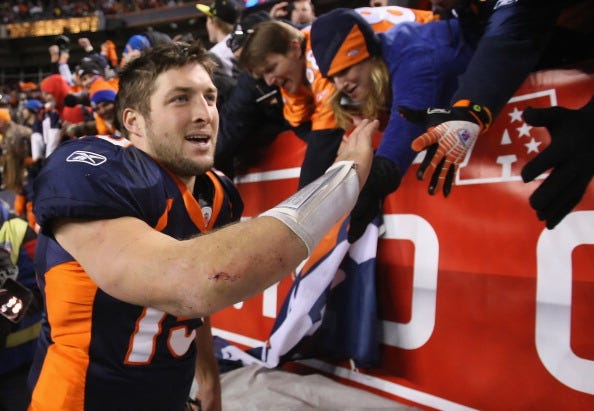 Tebow Time took the nation by storm in the mid-2000s as the lefty quarterback won two BCS National Championships with Florida and racked up all sorts of accolades along the way, including a Heisman Trophy. Yet, Tebow’s quirky throwing style raised questions of his NFL potential, and was seen as successful in college due to his ability to run. Despite those concerns, the Broncos drafted Tebow with the 25th pick in the first round. He displayed some magic in his second season, winning six straight games and tossing a walk-off touchdown pass in an overtime playoff game against the Steelers.

Despite his moment of glory, Tebow still had a completion percentage below 50 percent and did not really prove he was the long-term answer. The Broncos acquired Peyton Manning and Tebow was traded to the Jets where his most memorable moment was running shirtless in the rain during training camp. He attempted just eight passes in two games with the Jets before he was cut. He was signed and waived by both the Patriots and Eagles without ever appearing in another game and moved onto a baseball career. 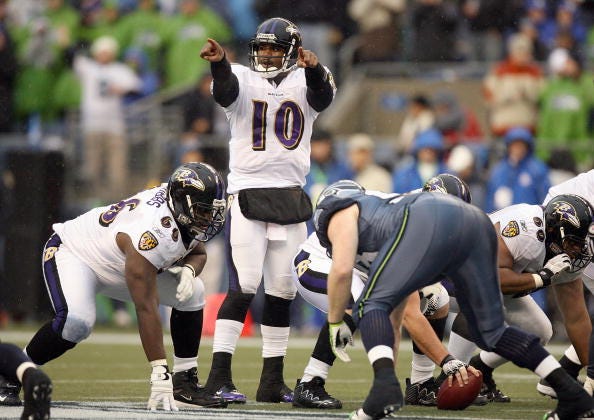 Smith put up gaudy numbers his Heisman Trophy season, tossing 30 touchdowns to six interceptions, but his college career ended on a sour note. The quarterback looked human in the 2007 BCS Championship Game against Florida, completing 14 passes for a measly 35 yards with a fumble and interception. Standing at 5-11, questions began to center around his height pre-draft and he dropped all the way to the fifth round when he was taken by the Baltimore Ravens. Smith started two games his rookie year and appeared in just 14 games over three season in Baltimore. He showed some potential in 2010 with the 49ers, going 3-3 with five touchdowns to four interceptions and 1,176 passing yards over six games, but he would not play another game. 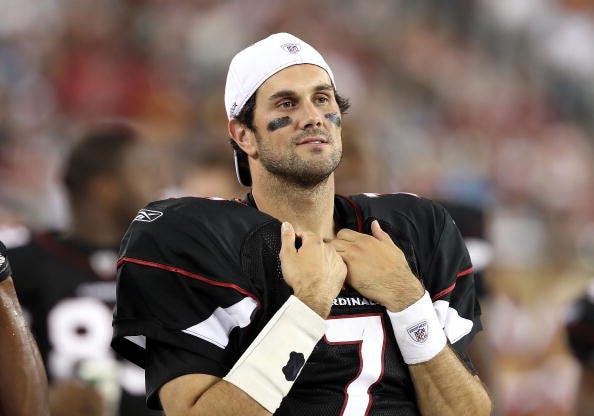 Matt Leinart looks on from the sidelines while with the Arizona Cardinals. Photo credit Getty Images

The Matt Leinart-Reggie Bush years at USC were the hey-days, despite their BCS National Championship being vacated by the NCAA. Leinart was the Heisman Trophy winner that year, throwing for 3,322 yards and 33 touchdowns to six interceptions with a 65.3 completion percentage. His success in three years at USC led to Leinart being drafted 10th overall by the Arizona Cardinals in 2006. Scouts were critical of Leinart’s weak arm, though, and his rookie year he threw 11 TDs to 12 interceptions. He struggled again in an injury-shortened 2007 season and in 2008 was replaced by Kurt Warner as the starter. Warner led the Cardinals to a Super Bowl appearance with Leinart as the backup. He was the presumptive starter after Warner’s retirement in 2010, but lost the job in training camp to Derek Anderson. He was out of the NFL after 2012 having just an 8-18 career record. 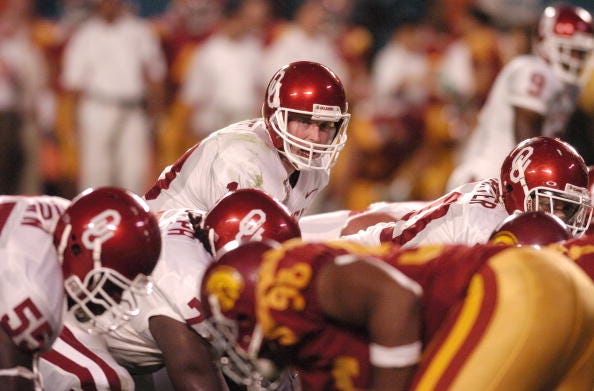 White was a Heisman Trophy winner over likely NFL Hall of Famers Larry Fitzgerald and Eli Manning, but never played a snap in the league. Despite his success at Oklahoma, two ACL tears during his college career changed the way he played his senior season and it hurt his draft stock to the point he was not drafted at all. He was signed to the Tennessee Titans’ practice squad but was soon released and never got a chance. 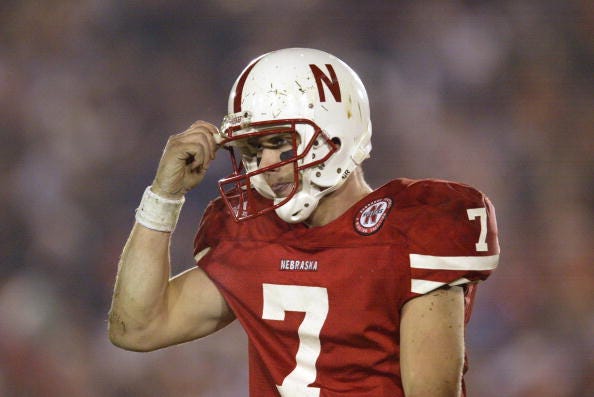 Crouch starred at Nebraska from 1999-2001 as a dual-threat quarterback, throwing for 1,510 yards and seven touchdowns, while rushing for 1,115 yards and 18 touchdowns his Heisman Trophy-winning year. Because of his speed and short stature for a quarterback (six feet tall) many scouts saw him as a wide receiver. The St. Louis Rams drafted him in the third round with exactly this intention. Crouch preferred to play quarterback and injuries ultimately led to him leaving the team before he could play a game in the NFL. He returned to the league in 2005 with the Kansas City Chiefs and was converted to a safety and played five games as a defensive back in NFL Europe before he was released. 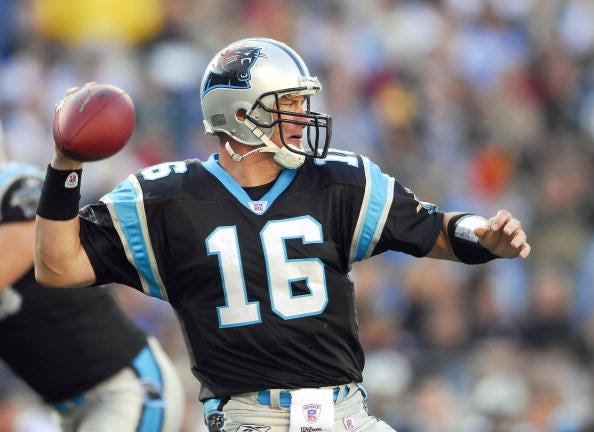 Weinke did not start the century off right for Heisman Trophy winners, although he was following Ron Dayne, another bust. The quarterback excelled at Florida State at the age of 26 after a failed baseball career, leading the Seminoles to an undefeated national championship in 1999 before winning the Heisman the next year. Despite earning college football’s highest honor, he was never a highly touted prospect, with his age likely a factor, and was not drafted until the fourth round by the Carolina Panthers. He went 1-14 his rookie season, throwing 19 interceptions. He was relegated to the backup role the next season and played in just 14 more games in his career, finishing with a 2-18 record.