The stage was set in both the Peach Bowl and Fiesta Bowl for the College Football Playoff semifinals on Saturday, and both LSU and Clemson have advanced to play each other in the national title game on Jan. 13.

LSU took care of business fairly easily in a 63-28 blowout of Oklahoma, while Clemson edged Ohio State, 29-23, in an instant classic. In addition to the final scores, there were also individual winners and losers in each bowl game. Many of the players and coaches on Saturday entered their respective bowl games with stock in their futures being placed on these games.

Some delivered. Some did not. Here's a look at the winners and losers from Saturday's College Football Playoff semifinal: 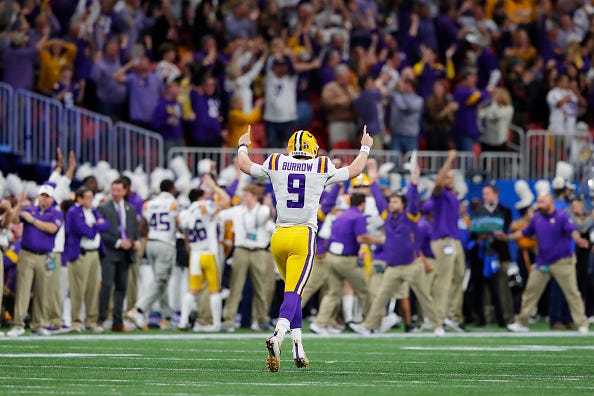 Burrow has been the consensus No. 1 pick for a while now, but his performance in the Peach Bowl was a historic one. Burrow threw for 403 yards on 21 of 27 passing and seven passing touchdowns all by halftime — setting a CFP and LSU record for most TD passes in a game and the most in a half of a bowl game by any FBS player in history. He added another rushing TD and finished with 493 passing yards — another CFP record. Yes, it was against a Big 12 defense, but Burrow showed no stage is too big for him and if there was any doubt about being the consensus No. 1 pick, there isn’t anymore. 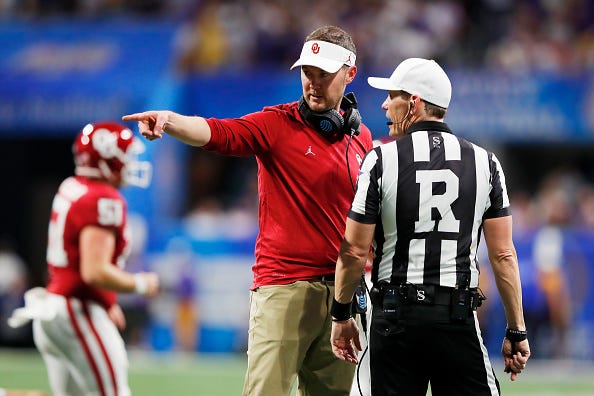 The Oklahoma head coach has been a popular name floated around as a potential NFL head coach, but his attractiveness at the pro level could be waning. This was the third straight year the Sooners lost the CFP semifinal game and Oklahoma's overall performance only raised more questions about Riley's future, and whether or not that involves the NFL. His team flat-out did not show up. Despite being hailed as an offensive guru, Oklahoma delivered an underwhelming performance and failed to keep pace with LSU's offense. The defense, which was already a weak spot, was completely non-existent. The game was over by halftime and LSU was putting up all sorts of records on them.

Riley could still lean on his previous success to make a move to the NFL, but overseeing a team that allowed 63 points in a bowl game on national television certainly must be a red flag for some teams. If an NFL opportunity comes knocking in the next few weeks for Riley, he should probably take it before his stock drops any lower. 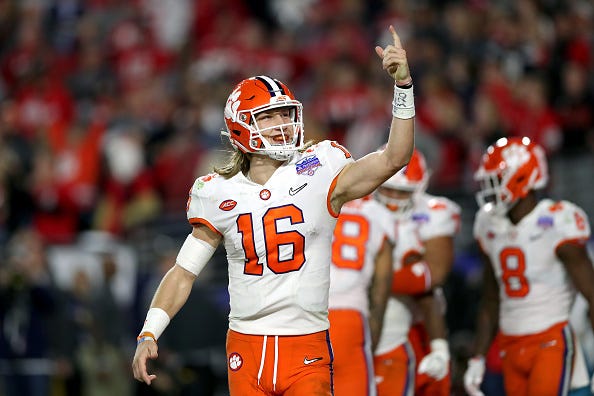 The true sophomore faced his toughest challenge yet with Ohio State, but Lawrence showed what he can do in the face of adversity. The Clemson quarterback led his team back from a 16-0 deficit early in the game, then again, late in the fourth quarter Clemson trailed 23-21 when Lawrence engineered a four-play, 94-yard go-ahead drive with 1:49 remaining. Lawrence faced immense pressure from the Buckeyes defense all night, forcing him to run 16 times for a career-high 107 yards, including a 67-yard rushing TD to go with his two passing TDs.

Lawrence had lost some of his luster earlier this season, but his performance on Saturday was a reminder of why he will be the No. 1 pick in the 2021 NFL Draft as he now aims to win his second consecutive national title and improve to 26-0 as a starter. 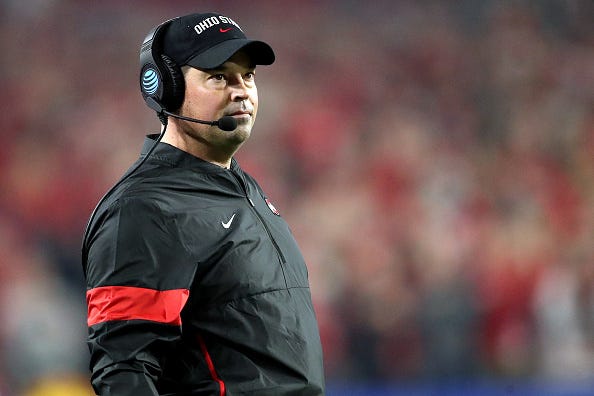 This season had been mostly smooth sailing for Day and Ohio State, but the Fiesta Bowl was not the head coach's finest hour. He got too aggressive in the third quarter, attempting a punt block that resulted in a roughing the kicker penalty. He got too timid in the fourth quarter, settling for an extra point instead of going for a two-point conversion when they took a 22-21 lead, and also punting from the Clemson 39-yard line on fourth-and-4 instead of going for it with 3:07 left in the game. In fairness, the latter decision was certainly a tough one and would have been a gamble, but it resulted in the game-winning drive for Clemson in just four plays. Day, who sustained his first career loss as a head coach, defended his decision-making after the game, but questions about his in-game management could follow him into next year.

This was originally called a catch and fumble return TD, but was overturned as an incomplete pass. #CFBPlayoff pic.twitter.com/3RxiGYTvCv

When the game is over, nobody really wants to hear about what the officials should have done, but it is hard to ignore some controversial calls the officiating crew made in the Fiesta Bowl. First, Ohio State Shaun Wade was ejected for targeting after he sacked Trevor Lawrence on what was deemed a helmet-to-helmet hit. Lawrence had to sit out a play, before returning and leading Clemson to score on the drive.

While that call could be more of a complaint about the NCAA targeting rules, the other one was more baffling and may have swung the momentum of the game. Buckeyes corner Jeffery Okudah forced a strip-sack fumble on Justyn Ross in the second half, which was scooped up and returned for a touchdown. Viewing the replaying in slow motion, it appeared Ross made the catch and took three steps before the ball came loose, but the call on the field was overturned after replay review, drawing the ire of many Ohio State fans and football fans in general on social media. Referee Ken Williamson told reporters after the game that replayed showed the ball was loose in Ross' hands, therefore he did not establish possession before the ball was knocked out.