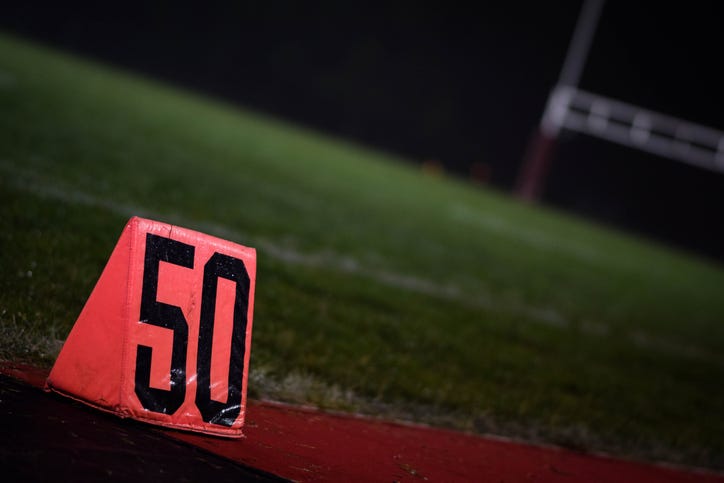 Saturday marked the seven-year anniversary of the Sandy Hook Elementary School mass shooting in Newtown, Conn. Vigils and church services were held throughout the day as the town continues to heal from one of the deadliest mass shootings in U.S. history.

At night, the Newtown High School football team turned what was a somber day into a joyous one.

The anniversary of the tragedy coincided with the Connecticut Class LL state championship football game, which featured an undefeated Newtown team going up against Darien.

With the game tied at 7 and three seconds remaining on the clock, it appeared destined to head to overtime. But on the final play, Newtown quarterback Jack Street connected with wide receiver Riley Ward on a 36-yard touchdown pass to win the state championship in dramatic fashion.

On the 7th anniversary of the Sandy Hook shooting, Newtown High School scored a last-second touchdown to win the state title.

It completed an undefeated season for Newtown and marked the school’s first state championship from 1992.

“I couldn’t have asked for anything more,” Ward told the Hartford Courant. “I love this town, I love everybody. I’m at a loss for words.”

Many of the students at Newtown High School attended Sandy Hook Elementary, including the team’s linebacker Ben Pinto, whose brother Jack was among 20 first-graders and six educators that were killed seven years ago.

Fans of both schools reportedly wore green at the game to honor the Sandy Hook victims, while the cheerleaders wore green bows and players wore green tape and paint.

“Our whole town showed out tonight,” Newtown linebacker Jared Dunn told GameTime CT. “That’s all I can ask for; there’s nothing better [than] to win it for your town, especially on a day like today. We remember everyone, and credit to Darien.”