How is it over already? It feels like just yesterday we were obsessively mock drafting, writing up our strategies, scrawling our sleepers and DO NOT DRAFTS on our notes, arguing about the payout structure and the last-place punishment, and everything else that makes fantasy football the monumental icon of American culture that it has become.

But it’s over. And as always, there were surprises and disappointments, breakouts and drop-offs, and everything in between. Let’s look at the best of the best -- and the worst of the worst -- as we hand out the awards for the 2019 fantasy football season.

Lamar Jackson’s 2019 will go down in history as one of the greatest seasons in fantasy football. He may not reach the point total that Peyton Manning hit in 2013, but that’s not because he came up short on the field. It’s because the Ravens coasted throughout the regular season to clinch the No. 1 seed in the AFC, and in turn will be able to rest their franchise centerpiece in Week 17. On a per-game basis, though, he exceeded Peyton Manning’s production. The season gets even better when you consider Jackson’s average draft position (ADP) entering the year. Taken on average as the No. 14 quarterback off the board behind names like Baker Mayfield, Tom Brady, and a certain someone else (see below), Jackson is likely one of the names seen most frequently on championship rosters due to the fact that he topped the leaderboards without costing owners an early draft pick.

If we’re talking performance-based busts, then Newton should get a pass. Instead, Baker Mayfield looks to be a more deserving recipient given that he was the fourth quarterback off the board in your average 2019 fantasy league. By year’s end, he was practically unstartable. As was the case with the whole Browns team this year (with the exception of Nick Chubb), Mayfield was wildly unpredictable and inconsistent throughout his sophomore campaign. A touchdown to interception ratio near 1:1 is rarely usable in fantasy football (unless you’re Jameis Winston), and Mayfield finished outside the top 15 quarterbacks as a result.

However, it’s hard not to recognize Cam Newton as the biggest bust after a mess of a season. The 2015 MVP played two games to start the year in which he scored no touchdowns, threw a pick, fumbled twice, and totaled -2 rushing yards. And that was it for the entire year.

CMC may not have had the same return on value as Lamar Jackson, as he was a consensus top-three overall pick. But the hefty investment paid off in a massive way. McCaffrey has been legitimately unfair this season, currently sitting second in the NFL in both rushing yards and receptions. His 18 touchdowns trail only the Packers’ Aaron Jones. So, while the differential between McCaffrey and the No. 2 running back is impressive in a standard scoring system, it becomes a mind-blowing differential when you add in points for receptions. In a happy-medium scoring system (.5 PPR), McCaffrey had only one game under 10 points and finished with more than 25 points in ten different games. His consistency was just as notable as his cumulative production, something that other top running backs like Jones and Derrick Henry can’t quite boast to the same extent. McCaffrey should firmly sit atop the draft list next season barring any major happenings.

There were a few good candidates for this “award,” and they’re neck and neck in the race. However, Williams trumps the other two primary options (listed below) based on a combination of ineffectiveness on the field, and inability to be on the field. He has missed six games which is never ideal. But even when he wasn’t hurt, his role fluctuated between feature back and afterthought in the ever-changing Kansas City backfield, and he finished with six games with fewer than 10 points. Though the runners-up forced owners to take them in the first round, Williams wasn’t far behind as a popular second- or third-round selection with a sky-high ceiling. Unfortunately, he never reached or even came close to hitting those expectations that he brought on during the 2018-19 NFL playoffs and was a massive letdown overall. 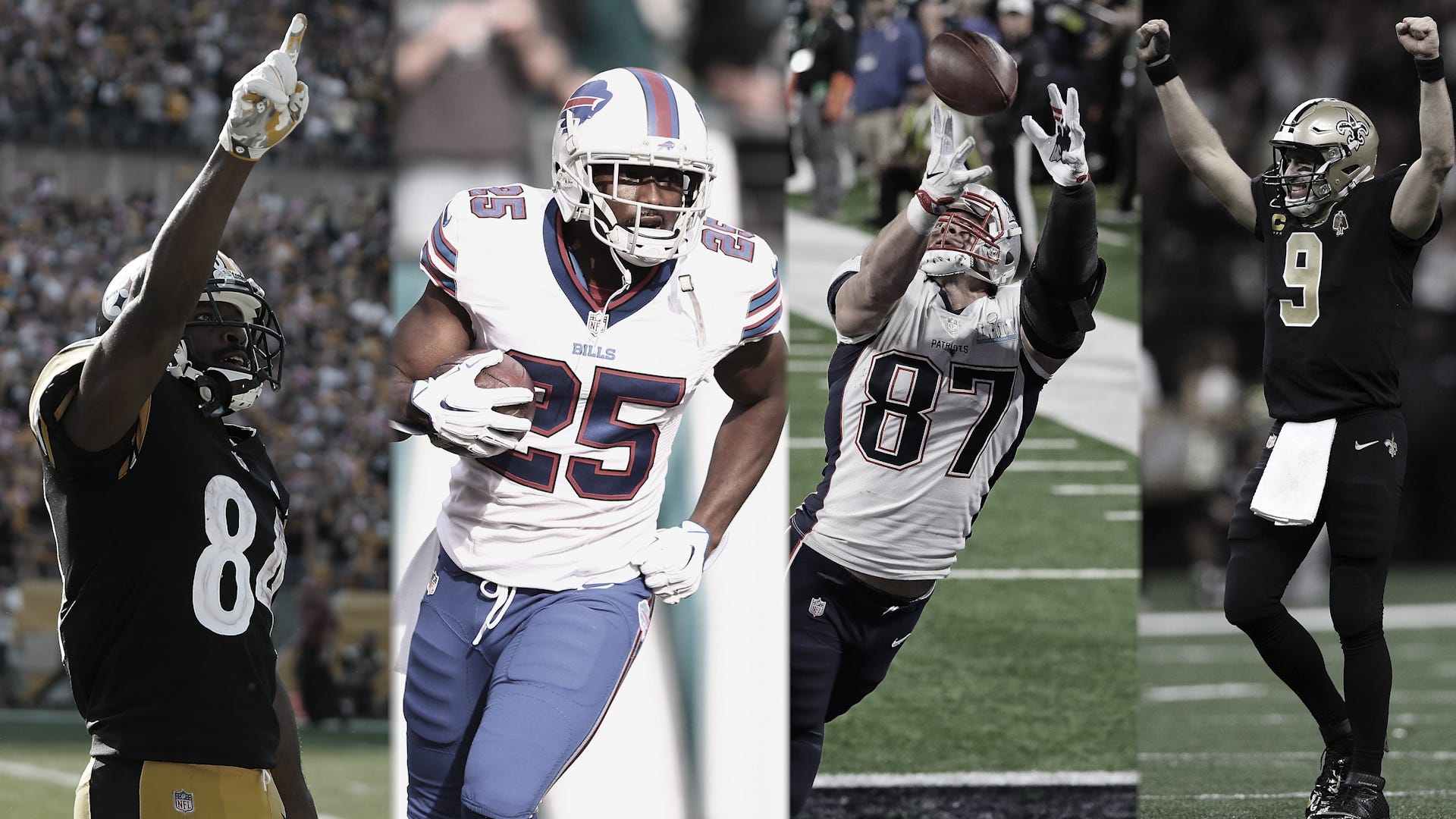 Had Chris Godwin stayed healthy and been available in the fantasy football championship, he may very well have taken home this honor based on his overall value and payoff. This is because Thomas was a first-round fantasy pick, while Godwin was a fourth- or fifth-rounder. But Godwin couldn’t stay healthy, and Thomas had another humongous week in the fantasy championship round, picking up the single-season reception record along the way. He leads the league in receptions (obviously) and yards by an impressive margin, and was really the only first-round WR to fully live up to the value. DeAndre Hopkins and Julio Jones were good but not great, Davante Adams struggled with staying healthy, and there were some major letdowns at the top of the list. But the Saints’ superstar provided value game-in and game-out, stepping up his production to an elite level once the playoffs came around. He and Godwin are the clear choices for the most valuable receiver.

Odell Beckham’s debut in Cleveland has been the center of a ton of media scrutiny, meaning he certainly disappointed owners who took him as the No. 5 receiver off the board (based on ADP). JuJu Smith-Schuster dealt with injuries and caught balls from two bottom-tier quarterbacks for the majority of the season, falling way below his No. 6 ADP value. A.J. Green didn’t play a single snap, meaning he was a complete waste of a fifth-round pick. But nothing stacks up to the complete and utter abomination of a year that Antonio Brown had in 2019.

The fact that his story completely transcended the football world and allowed AB to become a household name means that fantasy football is the least of our concerns when reviewing his season. But it’s impossible not to choose the troubled receiver who finished 2015-2018 as the No. 1 receiver in fantasy football, who was drafted on average in the second-round, and who played in only one game for the biggest wide receiver bust of the season.

Though he didn’t finish first in the tight end rankings, he will finish in the top five. But he wasn’t drafted as a top-five tight end, nor a top-ten tight end, nor even a top-20 tight end. No, Darren Waller was completely off the fantasy radar to begin the season, as Josh Jacobs, Antonio Brown and Tyrell Williams figured to be the prominent options in the Raiders’ revamped offense. He really still isn’t on the fantasy radar as a stud tight end option. Outside of Travis Kelce, though, he is the only tight end with 1,000 yards so far on the season, and he may end up being the most important waiver addition of the year for teams that waited on the tight end position.

Howard didn’t have a touchdown until Week 10, and he didn’t have a touchdown any time after that. And though he started to come alive toward the end of the season with three straight weeks of 7+ points (yes, that’s coming “alive” at the tight end position), it took him a painfully long time to get there. Considering he was drafted as the No. 4 tight end in fantasy, his finish outside the top 25 is really hard to stomach. The tight end position is a group that really drops off after the top ten, so Howard’s placement below guys like Blake Jarwin and Jordan Akins makes him the easy choice here.