The second and third rounds of the 2020 NFL Draft kicked off much the same way as the first round -- with the Cincinnati Bengals on the clock.

The Bengals made Clemson wide receiver Tee Higgins the first pick of the second round, 33rd overall, beginning what turned out to be a round-long theme of intriguing skill players flying off the board, much as they did on Thursday night. In fact, the 13 wide receivers selected in the first two rounds set a new draft record.

More on those picks and Higgins as we break down who came out on top on Day 2 of the NFL Draft.

The Bengals were already projected to have a pretty good offense assuming Burrow can step in and produce, but why not give him a weapon with whom he can grow and develop a rapport? That appears to be what the Bengals are going for in Higgins, who looks like a potential long-term answer at wideout with AJ Green, who turns 32 in July, coming off an injury.

The Bengals also had the first pick of the third round, this time addressing arguably a bigger need, on the defensive side of the ball, going with Wyoming linebacker Logan Wilson. 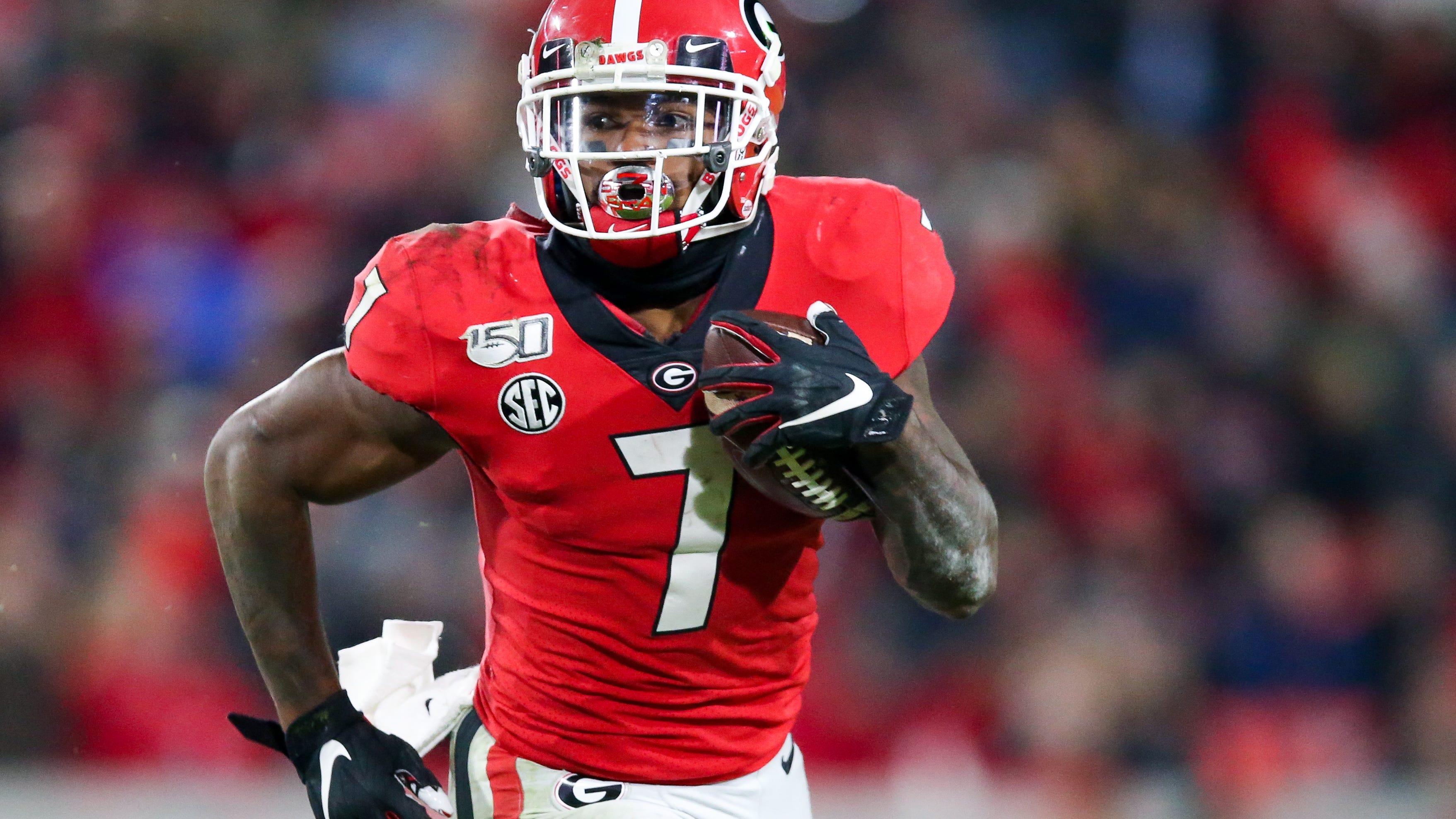 The Lions followed up a sensible first-round pick of Ohio state cornerback Jeff Okudah with stud Georgia running back D'Andre Swift -- and Swift's father's muscles -- plus intriguing edge rush prospect Julian Okwara of Notre Dame, and Ohio State guard Jonah Jackson. Okwara was a potential first-round talent who is coming off a knee injury. Jackson was in the discussion to be the first interior lineman off the board before Cesar Ruiz separated from the pack -- so getting Jackson in the third is a great value.

The Jets' first-round pick of behemoth offensive tackle Mekhi Becton landed flat with a lot of fans, but their splashy picks on Friday night might have helped make up for it. Baylor wide receiver Denzel Mims put up big production and stood out at the combine with blazing speed, and Cal free safety Ashtyn Davis was a conference champion hurdler and one of the fastest players in this draft.

With their final pick in the third, the Jets snagged Florida defensive lineman Jabari Zuniga, a talented player whose stock fell due to an injury-marred senior season. The Jets clearly prioritized speed, and got it in the first three rounds -- even Becton is shockingly fast for a man his size.

Having addressed quarterback in free agency, the Panthers were apparently determined to use the draft to repair their flagging defense. They snagged standout Auburn defensive tackle Derrick Brown on Thursday, and came back with more defensive reinforcements on Friday in Penn State defensive end Yetur Gross-Matos and Southern Illinois safety Jeremy Chinn. Chinn is an intriguing prospect loaded with tools who some projected to go in the first round -- the Panthers appear to have stole him.

The Patriots needed to restock the cupboard after a franchise-changing wave of defections in free agency this offseason. I'm not going to pretend to know anything about Lenoir-Rhyne safety Kyle Dugger, who the Pats stunningly drafted from the ranks of Division II in the second round, in classic Bill Belichick fashion. They also added a pair of linebackers, with Michigan's Josh Uche bringing pass-rush skills and Alabama product Anfernee Simmons brought in to stuff the run. Belichick even drafted a pair of tight ends for first time since 2010, in UCLA's Devin Asiasi and Virginia Tech's Dalton Keene, in third.

Most draft profiles refer to these guys as some combination as moldable, versatile, intelligent and tough. All hallmarks of Belichick guys. It may not be conventional, but he's earned the benefit of the doubt by now, and the most important objective was to infuse the roster with some young talent. Five picks should go a long way toward achieving that.

The Bears were radio silent on Thursday with no first-round pick. They got on the board with a pair of strong picks in the second round, however, tabbing Notre Dame tight Cole Kmet and Utah cornerback Jaylon Johnson. Johnson in particular feels like a classic Bears pick on defense, an impressive looking cornerback who might have fallen further than he should have. Kmet was the top-rated tight end on most boards.

All the Ravens seem to do is pile up talent. Baltimore snagged Ohio State running back J.K. Dobbins and Texas A&M defensive tackle Justin Madubuike in the second and third, respectively, two players who were rumored to come off the draft board well earlier than they ultimately did. To close out their night, the Ravens called the number of Texas wide receiver Devin Duvernay, touted for his explosiveness out of the slot, and late-blooming Ohio State utility linebacker Malik Harrison. Just another day at the office for Baltimore.

The Bills haven't drafted often so far this year, but when they have, they've made it count. After sitting out the first round, the Bills snagged Iowa defensive end A.J. Epenesa in the second round and bruising Utah running back Zack Moss, who ranked among the nation's leaders in broken tackles. Some scouts have compared Moss to Marshawn "Beast Mode" Lynch, who started his career with the Bills before moving on. Both players were projected to go earlier than where the Bills got them.

Like the Bills, the Vikings weren't featured heavily on Friday night, but they made the most of their opportunities. Boise State offensive tackle Ezra Cleveland was steadily climbing up draft boards after a strong combine performance, and very easily could have snuck into the late first round or early second. Instead, the Vikings got him at No. 26 in the second round, No. 58 overall. In the third round, the Vikings selected Mississippi State cornerback Cameron Dantzler, who was rated very highly by Pro Football Focus' advanced coverage metrics despite modest athletic gifts.

Taking Jalen Hurts in the second round was a stunner of the highest order. GM Howie Roseman later offered a vote of confidence to starting quarterback Carson Wentz, and explained the organization is simply in the business of consistently producing quarterbacks. While there's merit to the idea of drafting a backup, I don't know that they had to do it in the second round. Hurts has a unique skill set and can probably start for a few teams right now. But the Eagles aren't one of them, and they have other, more pressing needs.

The Packers were widely panned after their head-scratching first-round selection of Utah State quarterback Jordan Love on Thursday night, and made another curious pick in Round 2 with Boston College running back A.J. Dillon. I'm a fan of Dillon's, and Football Outsiders' projection model loves his chances based on his rare combination of immense size and impressive speed. But once again, Aaron Rodgers needs targets in the passing the game, and the Packers already have a No. 1 option on the ground in Aaron Jones. Cincinnati tight end Josiah Geduara was pegged by most as a Day 3 prospect and doesn't project as a difference-maker in the passing game. In a class loaded with receiving talent, it's hard to believe the Packers couldn't snag one for A-Rod.

The Raiders desperately needed to rebuild their receiving corps after shipping out almost everyone who wasn't nailed down. The problem is that they picked receivers with three of their first four picks, including on back-to-back picks in the third round in Lynn Bowden of Kentucky and Bryan Edwards of South Carolina. Henry Ruggs III was a no-brainer on Thursday night, but Edwards didn't produce how his physical tools suggest he might, while Bowden is a slot receiver who can run gadget plays. It's not a terrible haul, but definitely unusual, and probably not the most efficient use of draft capital.