The 40-yard dash, broad jump, vertical jump and 3-cone drill are some of the tasks players had to partake in, as well as positional drills.

As the on-field workouts wrap up for each positional group, stay up-to-date with the RADIO.COM Sports team as we track which players are rising on teams' draft boards, and which ones are falling with their combine performances. 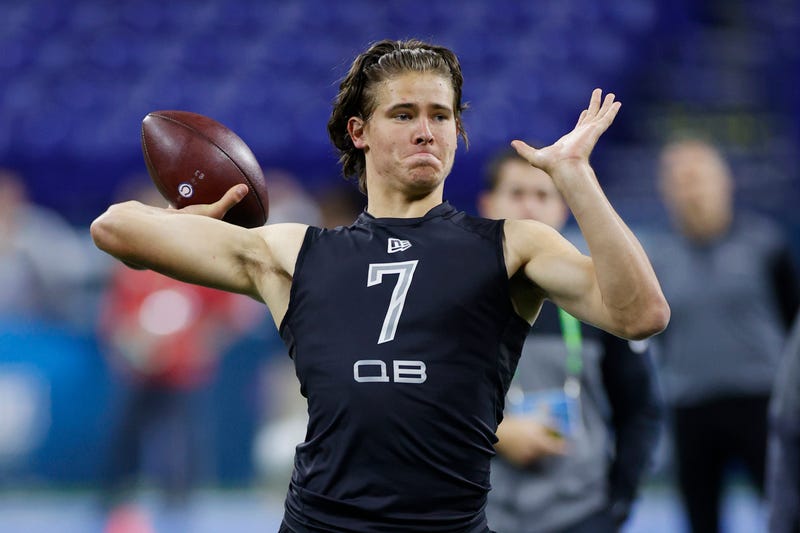 While Herbert's draft stock among quarterbacks may not actually rise from his performance -- it still seems as though he's behind Joe Burrow and Tua Tagovailoa on most big boards -- he shined in the workouts that took place Thursday and may have piqued the interest of teams who could have surpassed him for another positional need.

A 4.68 40-time clocked in as the third-fastest among this year's QB group, and he placed second in both the vertical and broad jump measurements. Where he really impressed, however, was in the on-field drills. He displayed pinpoint accuracy on several slants and deep throws, checking off several boxes in terms of ball placement, arm strength and mechanics.

Justin Herbert is finding his groove on the deep bombs🚀

His footwork was on display, too, finishing with the fastest time on the three-cone drill.

Considered by many to be outside the top-five quarterbacks in the draft, Hurts impressed on Thursday with a quick 40-yard dash time (4.59, second highest among quarterbacks) and excellent displays of athleticism in both the broad jump (T-1st at 125 inches) and the vertical (T-3rd at 35 inches).

His athleticism was never the questionable aspect of his game, however. His passing chops were passable throughout college, but have been an area of concern for his conversion to the NFL. Some of his doubters were treated to an encouraging performance at the combine.

Jalen Hurts is slinging the ball on those go routes... Those balls looking very nice coming out of his hand... #NFLCombine2020
pic.twitter.com/tcB7BhdZbr

If his skill level improves to the point where his accuracy is more consistent in both the short and deep passing game, he could be the most dynamic dual-threat quarterback in the draft.

This is definitely a good thing. Tua's stock couldn't climb much higher, as Cincinnati seems to have settled on Joe Burrow and the Alabama QB slid in right behind him on most big boards.

His health is the number one concern for fans and scouts alike, and the combine delivered encouraging results on that front. NFL.com's Ian Rapoport reported that the 21-year-old "received overwhelmingly positive reports on his dislocated hip." Tua remains one of the most interesting draft-day stories in a long time that we can expect to see come April. 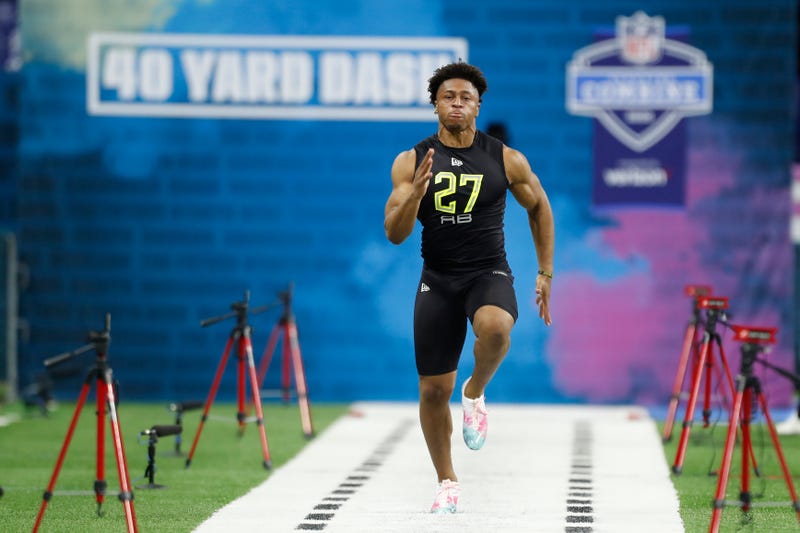 While it's believed that former Georgia running back D'Andre Swift will be the first running back selected in the 2020 NFL Draft, Jonathan Taylor made his case to be the second back selected, posting a 4.39 40-yard dash time, the best time among all running backs.

Taylor will compete with former Ohio State running back J.K. Dobbins to be the second back off the board, in all likelihood. If the defending Super Bowl Champion Kansas City Chiefs keep the No. 32 overall pick, they could select a running back to pair with Super Bowl hero Damien Williams. If Taylor falls to the second round, the Los Angeles Chargers, Miami Dolphins, Washington Redskins and Houston Texans are among the teams that could target a running back. 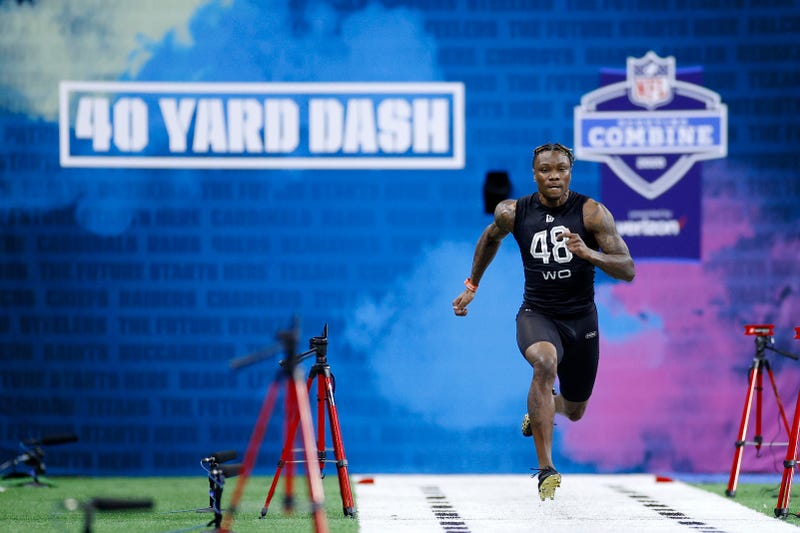 He may not have beaten John Ross's 2017 record, which was the main story line surrounding the Alabama alum's combine appearance. He still showcased his blazing speed, however, with a 4.27 40-yard dash time, tied with Marquise Goodwin and Stanford Routt for one of the fastest displays ever (via Pro Football Reference). Besides, he was seemingly disappointed by his performance, indicating he can be much faster.

Ruggs also recorded a 42-inch vertical (T-2nd among all receivers) and a 131-inch broad jump (T-4th). Even before the workouts, the freak athlete had been in the news with a 10 1/8-inch hand measurement which set him apart from several receivers best known for their speed. For instance, DeSean Jackson's hands measured a little under 9 1/2 inches at the 2008 combine, while Tyreek Hill's were just 8 inches at his 2016 Pro Day (via NFL Combine Results).

The former Horned Frog was expected to compete with Henry Ruggs for the fastest 40-yard dash performance. That hardly was the result, however, after Reagor finished outside the top-12 receivers in the drill, posting a 4.47 time. He also struggled in the three-cone drill, meant to emphasize agility and burst, by recording a 7.31-second finish (T-3rd lowest).

However, it's not all bad for Reagor. He turned heads with a 42.0-inch vertical jump, which tied Ruggs for the second-best number. His 138-inch broad jump was also a win, coming in as the second-highest figure. With that said, someone who was supposed to impress primarily with his breathtaking speed -- and who hyped himself up to do just that -- fell short in a big way. 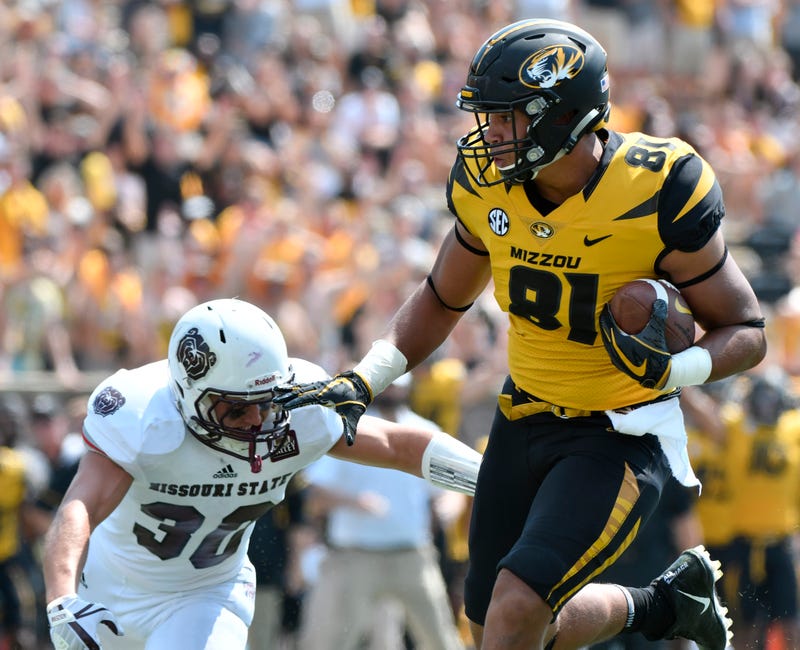 Last season, Noah Fant ran a 4.50 40-yard dash, taking the NFL world by surprise and helping him to become a first-round selection in the draft. If that's any indication of how Missouri TE Albert Okwuegbunam will fare in the draft, he should feel encouraged.

A wide receiver in high school, Okwuegbunam ran a 4.49 40 at Thursday's workouts, tying Jared Cook for a top-10 performance out of a tight end. He's sure to catch the eye of teams needing a tight end, including the Patriots, the Packers and the Bears.

Okwuegbunam finished his career at Missouri with 23 touchdowns across three seasons, including 11 in his rookie year. 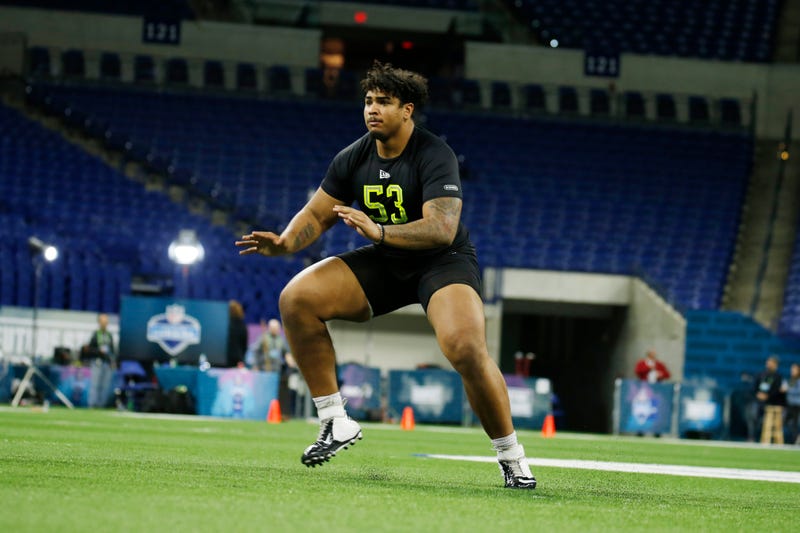 In a year where talent evaluators don't seem to have a consensus order of the top offensive lineman available in the NFL Draft, former Iowa tackle Tristan Wirfs certainly didn't hurt his draft prospects at the NFL combine.

Wirfs ran a 4.85 40-yard dash, which comfortably topped Andrew Thomas, Jedrick Wills, Josh Jones and Mekhi Becton, four other offensive lineman expected to be drafted in the first round. What's more, as Chris Trapasso of CBS Sports noted, Wirfs' 36.5 inch vertical not only topped all offensive lineman, but even wide receivers CeeDee Lamb and Jerry Jeudy, who were generally seen as having had strong performances in Indianapolis.

In our latest RADIO.COM Sports NFL Mock Draft, the New York Jets selected Wirfs with the No. 11 overall pick. However, both the Arizona Cardinals and Cleveland Browns selected other offensive lineman before Wirfs, something that may not prove to be a reality after his NFL combine performance. 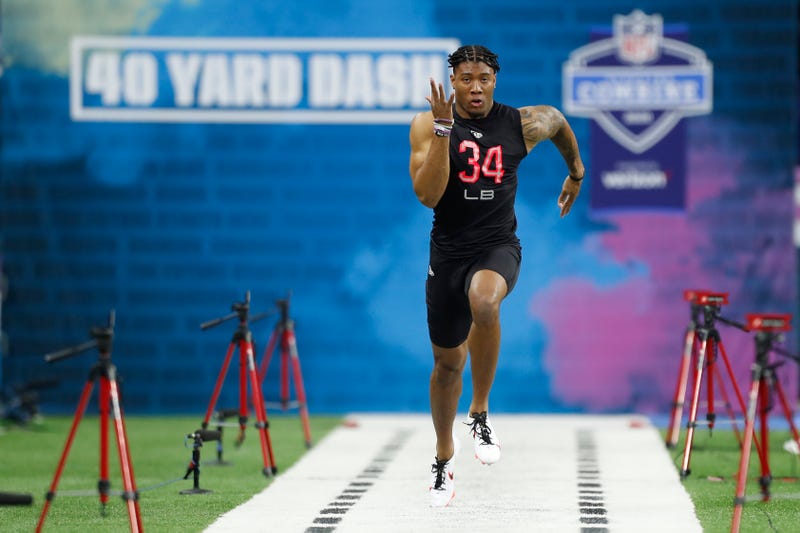 Simmons entered the combine already pretty high on many draft boards, so there was not a whole lot of room for him to "rise," per se, but it would be remiss not to mention him after his performance on Saturday.

The 6-foot-4, 238-pound linebacker dazzled in front of scouts with a scorching 40-yard dash time of 4.39 seconds — the fastest of all linebackers and faster than notable NFL running backs Saquon Barkley, Ezekiel Elliott, Dalvin Cook and Alvin Kamara. In addition to his 40 time, he also had a 39-inch vertical and 11-foot broad jump. It was the first time since 2003 that someone who weighed at least 230 pounds had a broad jump of 11 feet, vertical of at least 38 inches and ran a sub-4.40 40 time.

Teams who are inside the top 5 of the NFL draft and are considering trading down may now need to think twice after the athletic showcase Simmons put on this weekend.

Willie Gay Jr. could not afford to have a bad combine. He still has a lot to prove in the lead up to draft day after being suspended eight games last season for violating team rules at Mississippi State and injuring his own quarterback during an altercation in practice before the Music City Bowl. While his response to questions about those incidents will go a long way in his draft stock, he certainly grabbed some positive attention with his on-field workouts.

The 6-foot-1, 243-pound linebacker was not all that dissimilar from Simmons on Saturday. In fact, he topped him with a 39.5 inch vertical jump and 11 feet, four inch-broad jump. He fell short of Simmons in the 40-yard dash, though, clocking in at 4.46, which is still impressive. If Gay can demonstrate he has learned from his off-field incidents, he could be the ultimate sleeper in the draft. 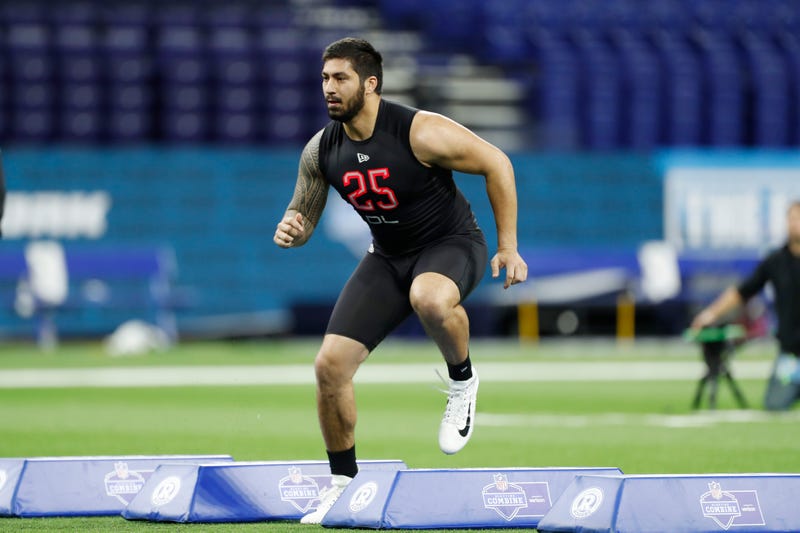 Epenesa has been a dominating force for Iowa the last two years and a strong combine performance could have thwarted him into a potential top-15 pick. Instead, Epenesa found himself possibly sliding down draft boards. The 6-foot-5, 275-pound edge rusher ran his 40 time in 5.06 seconds — a time better suited for a defensive tackle. While Epenesa has some solid game tape to go off of, quickness is such an important factor for edge rushers, especially those looking to go in the first round. Teams will definitely be approaching him with caution following his sluggish combine performance. 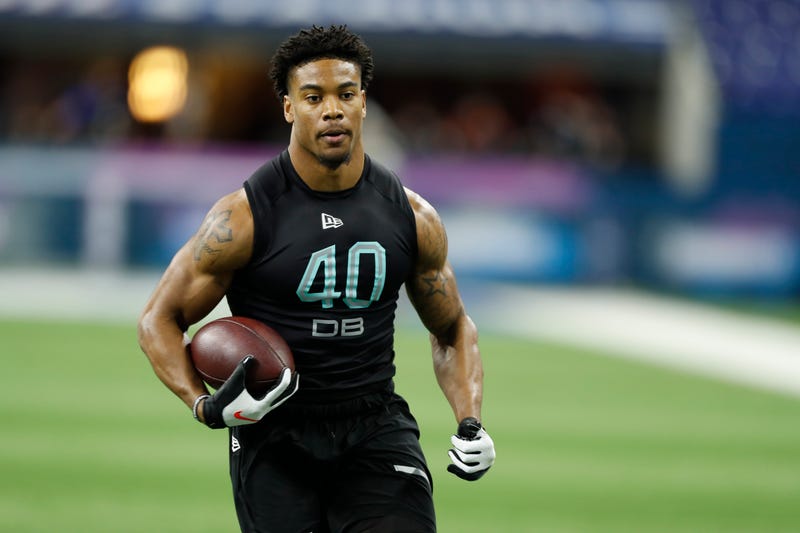 The 6-foot-3, 221-pound safety's stock was already on the rise after an impressive Senior Bowl outing, and Chinn continued that trend on Sunday. In what is a rather deep field of defensive backs, the non-FBS safety may have proven he is worth a late first-round pick with his 41-inch vertical, 11-6 broad jump (second best among all participants) and a 4.45 40, along with a strong showing of his on-field drills.

Henderson was already projected as a likely first-round pick, but he had perhaps the best combine performance of any defensive back on Sunday. The six-foot, 204-pounder may have proven to be the No. 2 cornerback in the draft behind Jeffery Okudah with a 4.39 40 and 20 bench press reps. In addition to his speed and strength, Henderson also was also impressive during the on-field drills and surely separated himself into the top tier of defensive backs in this draft class. 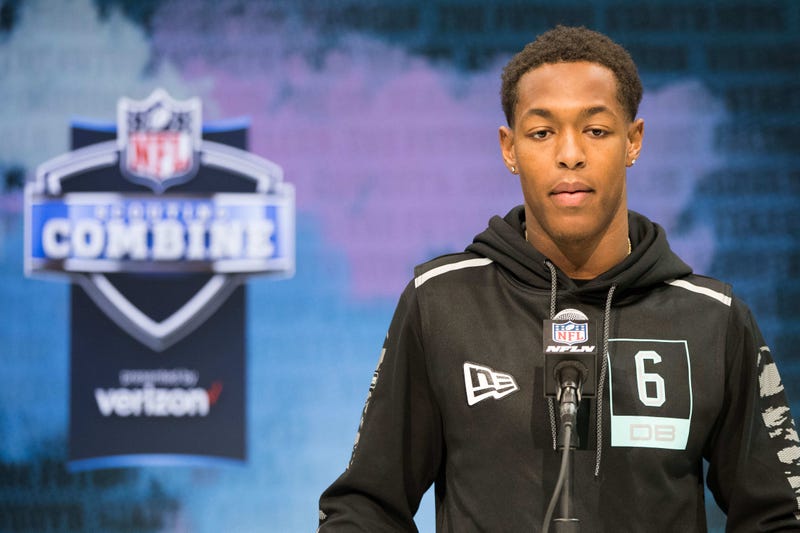 Any defensive back who weighs in at 188 pounds ought to be fast, but Dantzler could not sell anyone on his speed after running a disappointing a 4.64 40. In addition to his small frame, Dantzler also measured with small arm size (30 5/8 inches) and wingspan (72 5/8 inches), too, raising some concerns. The 21-year-old was fine in his on-field drills, and his tape shows someone who plays with plenty of physicality despite his lack of size, but his combine performance probably makes him a late Day 2 pick.