Every team in the NFL has now played at least one preseason game. Is it too early to draw any long-term conclusions? Probably. But here are three things that stood out in Week 1 of the NFL preseason.

1. Patrick Mahomes picked up right where he left off

While it would be hard for the 23-year-old to top his 2018 season, you get the sense he’s going to be at the forefront of the MVP race again in 2019. Nothing that happened in the Chiefs first preseason game - where they defeated the Cincinnati Bengals - dissuaded that notion.

Of course, you always have to add the qualifier that it’s the NFL preseason, which typically doesn’t mean much for established NFL superstars. But on his first throw, Mahomes connected on a 36-yard pass with All-Pro tight-end Travis Kelce. Mahomes made it look like an easy throw, but it was far from that:

Peek this angle of @PatrickMahomes to @tkelce 👀 pic.twitter.com/I8izgGmdMY

Mahomes ultimately led the Chiefs on a seven-play, 83-yard drive that culminated in a one-yard touchdown run by his new teammate, running-back Carlos Hyde. Mahomes, who earned the nickname “Showtime” last season, completed all four of his passes for 65 yards. As far as lone drives go in the first week of the preseason, the 2018 All-Pro quarterback couldn’t have done much better.

Perhaps the most encouraging moment of the night - though that may just be my interpretation of it - came on a 10-yard run by Mahomes. No, MVP quarterbacks shouldn’t be running under any circumstance in the preseason. But Mahomes did, he ran for 10 yards and he showed enough awareness to get down before potentially taking a hit from Bengals linebacker Brandon Bell:

Patrick Mahomes looks like he’s gonna throw 80 TDs this year - but this had to make Chiefs fans just a bit nervous. pic.twitter.com/E9x1DZB6IP 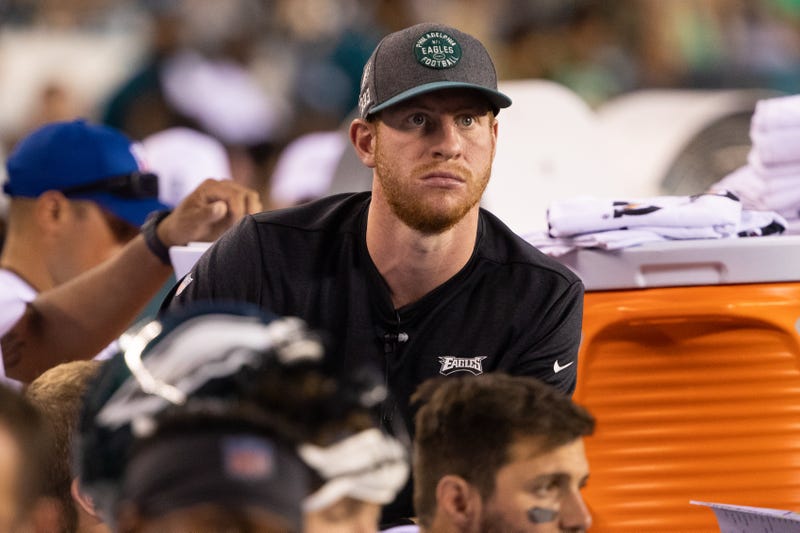 What Nick Foles has done the last two years as the Eagles backup quarterback is one of the most unique situations in NFL history. After Carson Wentz tore his ACL in Week 14 of the 2017 season, Foles guided the Eagles to their first Super Bowl title and won Super Bowl MVP. In 2018, with Wentz again sidelined with a back injury, Foles led the Eagles back to the postseason and to a playoff win in Chicago (granted, that was aided by Cody Parkey).

Here’s the thing: Foles was a backup in terms of position on the depth-chart and contractual status only. It’s unclear how he’ll fare as the Jacksonville Jaguars starting quarterback, but he’s unquestionably one of the 32 best quarterbacks in football and earned another chance to lead his own team.

Doug Pederson and the Eagles, though, no longer have the greatest insurance policy in quarterback history to fall back on. And that became clear in the first week of the preseason, when new backup Nate Sudfeld suffered a broken left wrist that may keep him from being ready to open the season.

The Sudfeld injury turned into a discussion about what veteran backup options the Eagles could consider, as opposed to opening the season with Cody Kessler as Wentz’s backup. It turned into a discussion about whether Sudfeld, 25, was ever a good enough backup option to open the season with. (It is worth pointing out that when he was called upon to make a pass in the Eagles Week 17 win-or-go-home game in Washington last year, Sudfeld completed a 22-yard pass.)

But as Wentz - inactive for the first preseason game - watched on from the sideline, Sudfeld's injury became a reminder that in his fourth NFL season, Wentz can't watch any regular or postseason games from the sideline this year. Whether it's Sudfeld or someone else backing him up, there will likely be drastic drop-off in quarterback play if Wentz has to come out of the game.

Now 26, Wentz is surrounded by enough talent offensively for him to rediscover the form that made him an MVP candidate two seasons ago while helping the Eagles to compete for their second Super Bowl title in three years. Lane Johnson and Jason Kelce lead what's been an elite offensive line for some time. General manager Howie Roseman reacquired DeSean Jackson this offseason, adding him to a group of pass catchers that already included Zach Ertz, Dallas Goedert, Alshon Jeffery and Nelson Agholor. Roseman also selected running back Miles Sanders out of Penn State in the second-round of the NFL Draft. Sanders is a dark horse Offensive Rookie of the Year candidate, and he'll be paired in the backfield with Jordan Howard, who rushed for 3,370 yards in three seasons with the Chicago Bears.

Armed with a new four-year/$128 million contract and perhaps as deep a group of offensive talent as the franchise has ever had, the Eagles have given Wentz a sense of security. In 2019, it's his job to assure the Eagles that they have stability at the quarterback position and that a playoff run won't ultimately come down to whether Sudfeld or another backup is capable of winning a bunch of important games.

3. Kyler Murray looked nice, but there's work to be done

A season ago, the Arizona Cardinals were a team so devoid of offensive talent that it was hard to make a true evaluation on Josh Rosen, who had been selected with the No. 10 overall pick in the NFL Draft.

Well, with the No. 1 pick in their possession, new head coach Kliff Kingsbury and the Cardinals assessed that Rosen didn't give them them a better chance to build a sustainable contender than Heisman Trophy winner Kyler Murray, so they traded Rosen to the Miami Dolphins and selected Murray with the top overall pick.

The Cardinals still are far from a team deep in offensive weapons, but they signed former Buffalo Bills tight-end Charles Clay to a free-agent deal. They'll add him to running-back David Johnson - who they hope bounces back to the form that made him an All-Pro in 2016 - and future Hall of Fame wide receiver Larry Fitzgerald.

Best believe, regardless of how the offensive talent around Murray plays, there won't be a lack of coherent opinions on his performance in 2019.

In the Cardinals preseason opener against the Los Angeles Chargers, he completed six of seven pass attempts for 44 yards before taking a drive-ending sack:

The 22-year-old displayed his athleticism and elusiveness without rushing for a single yard. That's an important quality for any quarterback to have, especially one that's - at most - 5'10 and will be playing behind an offensive line that Football Outsiders says was the 25th best in the sport a season ago.

Perhaps this is unfair, but Murray is at least an inch shorter than Russell Wilson and two inches shorter than Drew Brees. Until he proves that he can succeed in the NFL at his height and just over 200 pounds, there's going to be skepticism. And despite him completing six or seven passes in his preseason debut, it's impossible not to notice that none of those successful passes were over the middle of the field.