Jim Gruden, a former NFL scout, position coach and executive, has said that he goes through "eight hours of hell" when his sons, Jon and Jay, are coaching their games on a Sunday. Fortunately for Jim, Jon and Jay both coached during the early window Sunday. Exactly where his mood was, well, that's hard to say.

Both Gruden brothers are among this week's three NFL takeaways: 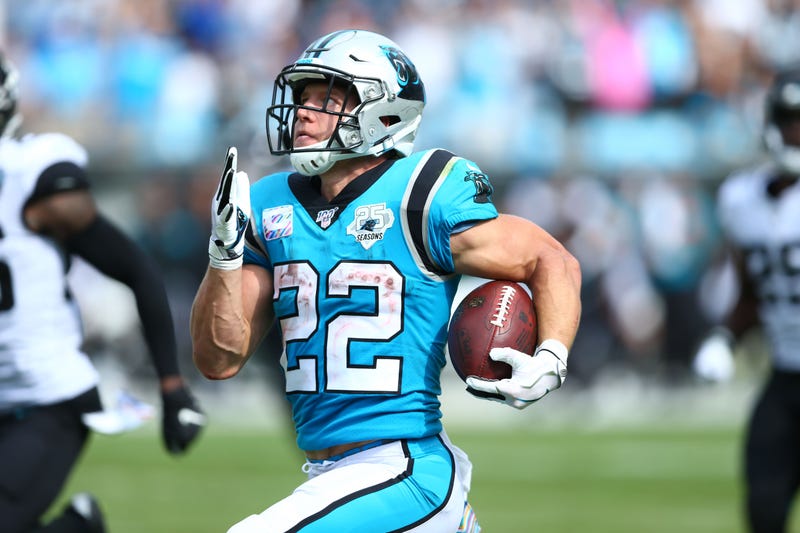 Panthers running back Christian McCaffrey is off to an explosive start to the 2019 season. Photo credit (Jeremy Brevard/USA Today Images)

1. Christian McCaffrey Is An MVP Candidate

The Panthers won their third consecutive game Sunday, defeating a pesky Jacksonville Jaguars team 34-27. All three victories have come without former NFL MVP Cam Newton under center, and while Kyle Allen deserves some credit for that, McCaffrey has been dominant the past three games.

Sunday, McCaffrey, the No. 8 overall pick in the 2017 NFL Draft, ran for 176 yards and two touchdowns. Frankly, it was hard to decide which of his two rushing touchdowns was more impressive.

McCaffrey gave the Panthers an early 7-0 lead with a rushing touchdown that saw him stiff-arm Jaguars defensive end Josh Allen and ultimately flip into the endzone:

The Panthers first drive of the second half lasted just 12 seconds, the length of time it took McCaffrey to rush for an 84-yard touchdown:

For good measure, McCaffrey added in six catches for 61 yards, including an 18-yard receiving touchdown.

Through the first five weeks of the season, the 23-year-old has rushed for 587 yards, while averaging over five-and-a-half yards per carry. His performance thus far may not be quite on par with the season Peterson had in 2012 that allowed him to win the NFL MVP, but when you factor in how good of a pass-catching weapon McCaffrey is, it's hard to argue that he's become one of the five most dominant offensive weapons in the NFL. 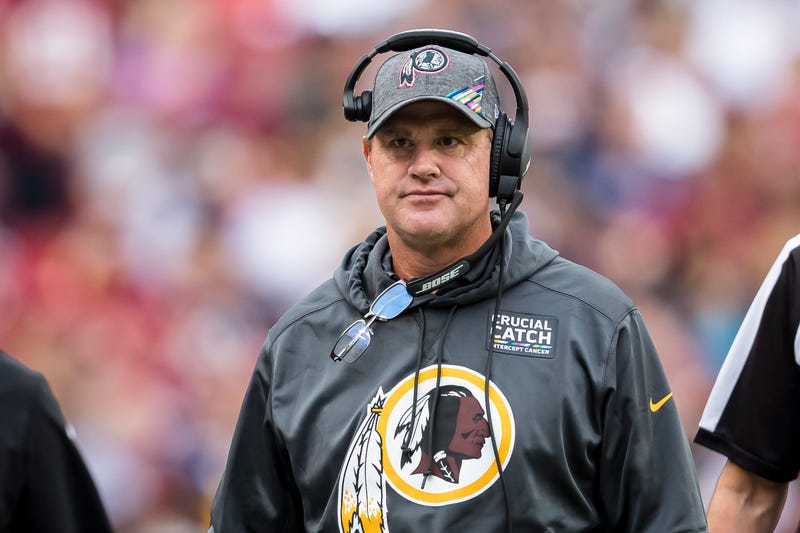 Jay Gruden's Redskins have yet to win in 2019. Photo credit (Scott Taetsch/Getty Images)

2. It Was The Perfect Storm For Jay Gruden

While Jon Gruden said that Sunday was the most fun that "he's ever had" as his Oakland Raiders defeated the Chicago Bears in London, his brother, Jay, isn't likely to remember the weekend as fondly.

Late last week, Les Carpenter of The Washington Post reported that Dwayne Haskins, who the Redskins spent their 2019 first round pick on, wasn't someone that Gruden wanted to draft, and the former Ohio State quarterback is aware of that.

Saturday, videos of Gruden smoking and appearing to flirt with younger women surfaced. Grudent, 52, has been married since 1990. Mike Florio of Pro Football Talk later reported that the videos weren't new, which, of course, makes you wonder why they happened to trickle out a few days before Gruden was ultimately dismissed.

And then Sunday, despite holding their own in the first half, the Redskins lost 33-7 to the New England Patriots at home to drop to 0-5. Since the Redskins jumped out to a 17-0 lead in Philadelphia in Week 1, they've been outscored 151-56. Gruden rubbed quite a few veterans the wrong way when he made future Hall of Fame Adrian Peterson inactive before Week 1. He joked Sunday that he would continue to work as long as his key card led him into team facilities, which seems to be the kiss of death for embattled NFC East coaches.

It was just the perfect storm of events that ultimately led the Redskins to fire Gruden after five-plus seasons Monday. It's believed that Bill Callahan, the team's assistant head coach and offensive line coach, will ultimately take over as Gruden's replacement for the time being.

While a dismissal of Gruden is hardly shocking, there's a few scary takeaways from it. First, Sean McVay, the Los Angeles Rams head coach, was on his staff and ultimately allowed to leave to become a head coach. Second, while Gruden wasn't a perfect head coach, he's easily the longest-tenured head coach since Daniel Snyder bought the team in May of 1999. Given that he'll finish his tenure with just a .418 winning percentage, you wonder if issues in D.C. don't run a lot deeper than the former head coach. 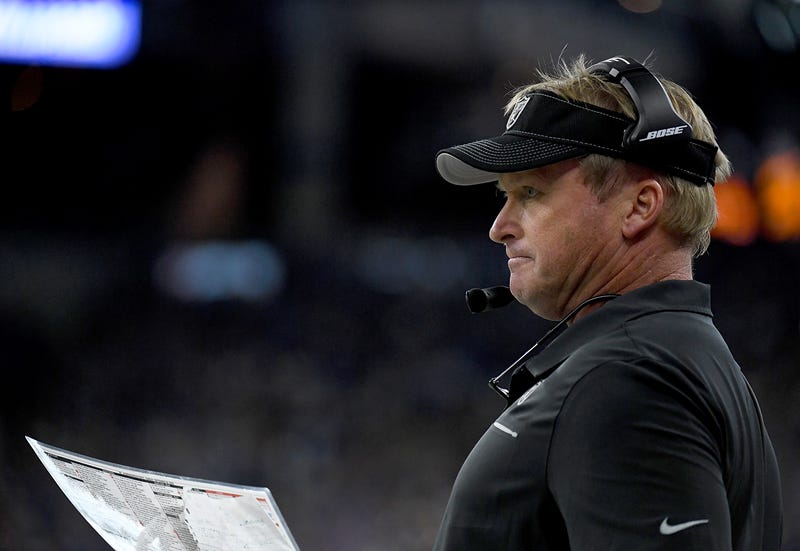 Jon Gruden and the Raiders are off to a surprising 3-2 start. Photo credit (Bobby Ellis/Getty Images)

3. Two Coach of the Year Candidates Are Emerging

With their 33-7 win Sunday, the New England Patriots moved to 5-0. Though rattling off 11 additional wins will be no easy task, if the Patriots ultimately do complete an undefeated regular season, it's hard to imagine Bill Belichick not winning the NFL Coach of the Year.

Think what you may about how Gruden has constructed his organization and whether early success is sustainable, but the Raiders are off to a 3-2 start after a surprise win over the Chicago Bears in London Sunday. They're 3-2 despite being in the midst of a five-game stretch without a true home game in Oakland. They're 3-2 despite this being the final year they will play their home games in Oakland. And, of course, they're 3-2 after ultimately the most tumultuous preseason in NFL history, because of the various storylines that surrounded Antonio Brown.

In the next two weeks, the Raiders will travel to Green Bay and Houston. They still have another tilt with the division-rival Kansas City Chiefs on their schedule, along with two against the Los Angeles Chargers, who still feel likely to overcome a sluggish start. But if the Raiders finish above .500, let alone if they were to sneak into the postseason, there's a lot of narratives that would work in the favor of Gruden.

While the totality of the Raiders preseason had a more circusy feel than the Colts, much of the Colts preseason was overshadowed by uncertainty about whether Andrew Luck was going to be ready to start the season. And then, less than two weeks before the Colts season-opener, Luck shockingly retired.

Reich was the backup for Jim Kelly in Buffalo that orchestrated one of the greatest comebacks in NFL history in January of 1992. He was the Philadelphia Eagles offensive coordinator two seasons ago when they overcame a season-ending injury to Carson Wentz to win the franchise's first Super Bowl title with Nick Foles under center. But having your 29-year-old quarterback retire in perhaps as shocking of a fashion as the sports world has ever seen, that was a new test, even for Reich.

After Sunday, it looks like Reich is acing the test, though. The Colts defeated the previously undefeated Kansas City Chiefs at Arrowhead Stadium 19-13 Sunday to move to 3-2. They also have wins in hand against the Tennessee Titans and Atlanta Falcons. Their only two losses came in a Week 1 overtime loss to the Chargers and in Week 4, against Gruden's Raiders.

With Sunday's win over the Chiefs, Reich's Colts find themselves tied atop the AFC South with the Houston Texans. If they ultimately win the division, Reich may find himself adding some additional hardware to his collection in early 2020.