Week 2 of the NFL season was so jam-packed that the Los Angeles Chargers suffering a brutal road loss to the Detroit Lions, Lamar Jackson and the Ravens moving to 2-0 and Jimmy Garoppolo turning in his best game in the NFL seem like afterthoughts Monday morning.

Here are three things that stood out during Week 2: 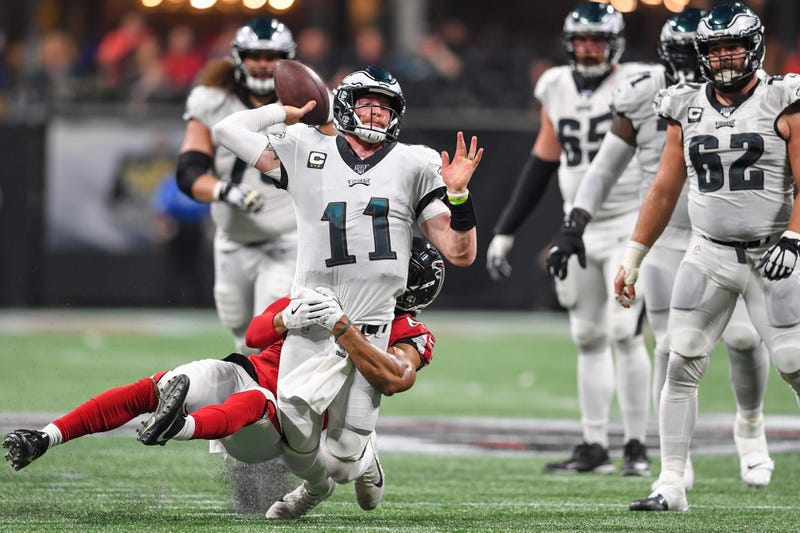 If you can remember an NFL game in the last five years (and maybe longer) that saw more players end up in the medical tent and/or locker room, you're in the minority.

Falcons punter Matt Bosher was dealing with an obvious groin injury, one that led to his three punts going for an average of just 39.3 yards. Forty-four-year-old kicker Matt Bryant was forced to do kickoffs for the first time in over a decade. Though rookie right tackle Kaleb McGary ultimately returned to the game, he suffered a knee injury that he'll have further evaluated Monday. Safety Damontae Kazee, cornerback Desmond Trufant and safety Ricardo Allen all suffered minor injuries during the game that forced them to miss some time, though none of the injuries appear like they will have a lingering affect beyond Sunday.

For the Eagles, DeSean Jackson and Alshon Jeffery were injured early in the game and did not return, which left the Eagles without many passing options considering that a calf injury kept second-year tight end Dallas Goedert from playing at all, even though he was active. Meanwhile, quarterback Carson Wentz took a shot in the ribs early in the first-half, and before halftime, he ended up in concussion protocol for a different hit. Wide receiver Nelson Agholor was blown up in the endzone, which forced him to go through concussion protocol. The Eagles had to burn a timeout in the fourth quarter to assure that Zach Ertz didn't miss a play after he took a big hit over the middle and had to briefly come off the field ahead of a crucial third-and-10. Two plays later, when Wentz hooked up with Agholor for a 43-yard gain on fourth-and-14, future Hall of Fame left tackle Jason Peters had to come off for a play after getting the wind knocked out of him.

Though the injuries didn't subside late, the quality of play increased rather dramatically late in this game.

Following Wentz and the Eagles going on a 13-play, 73-yard drive that saw the fourth-year quarterback rush for a touchdown and complete a two-point conversion, the Falcons answered in a major way. Down 20-17, the Falcons elected to run a play on fourth-and-3 on their own 46-yard line just ahead of the two-minute warning. That decision ended with Julio Jones in the endzone:

THE BEST RECEIVER ON THE PLANET.

After completing a pass to Agholor to open the drive, Wentz put another ball on his hands on the first play out of the two-minute warning. If Agholor had caught the ball, he certainly would have scored and there's a very real chance that the Eagles would have won the game:

In fairness to Agholor, he did have eight catches for 107 yards and a touchdown Sunday. And when Wentz returned to him on fourth-and-14, the former first round pick hauled in a catch that went for over 40 yards:

The @Eagles convert on fourth-and-14 with a ridiculous throw and catch! @cj_wentz @nelsonagholor #FlyEaglesFly

Ultimately, the Falcons would stop Ertz about half a yard short on fourth-and-8, a ruling that was upheld after being reviewed. The Falcons avoided an 0-2 start by winning one of the stranger - and more brutal - football games in recent memory.

En route to winning Super Bowl 52, the Eagles defeated the Falcons 15-10 in the NFC divisional round, with a last-second attempt to Jones falling through his hands. When the two teams met again at Lincoln Financial Field to open the 2018 NFL season, it again came down to the Eagles stopping a pass attempt to Jones on the final play, as they won 18-12. Sunday, this time in Atlanta, Jim Schwartz's defense ran out of magic in their attempt to defend arguably the best wide receiver in the NFL with the game on the line.

Though not obvious geographic or divisional rivals, Eagles and Falcons has turned into something of an NFC rivalry over the past few seasons. One of the best indications of a rivalry is a physicality that extends beyond a normal game. Suffice to say, that was present Sunday evening. 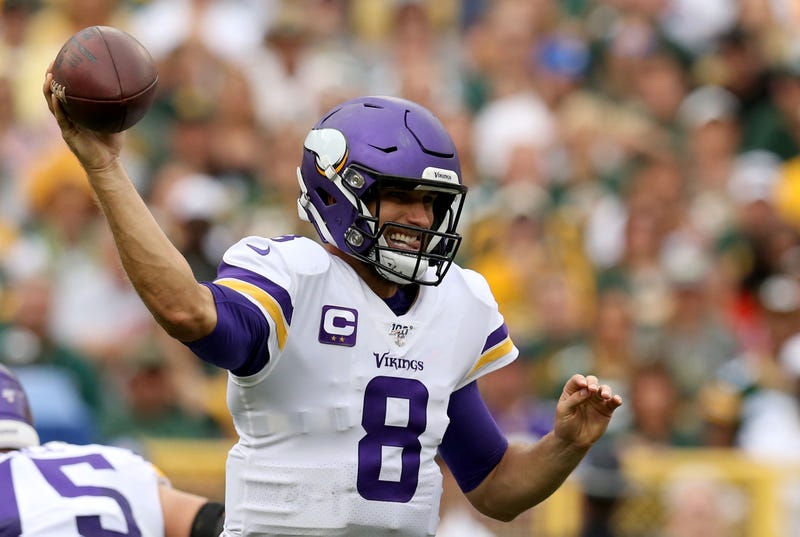 2. The Vikings Are A Piece Away

Aaron Rodgers and the Green Bay Packers jumped out to a 21-0 lead at Lambeau Field Sunday, a sign that they may win going away against their division rivals, the Minnesota Vikings.

Ultimately, though, that didn't happen. Mike Zimmer's defense adjusted and didn't allow the Packers to score a single point in the second half. Dalvin Cook ran for a 75-yard touchdown to put the Vikings on the board before halftime. Eventually, the Vikings put themselves in a position to steal an important NFC North matchup late on the road.

And then Kirk Cousins tried to take the game into his own hands:

Kirk Cousins is in his eighth year in the NFL and made this throw on first and goal with over five minutes to go. pic.twitter.com/VCFGfdaPOl

Even following an inexplicable interception thrown by Cousins, the Vikings got the ball back with just over four minutes left with a chance for their 31-year-old quarterback to atone. Instead, the Vikings went three-and-out and punted the ball back to the Packers, going on to lose the game 21-16.

The feeling you are left with after two games is that the Vikings are one of the deepest teams in the NFL. Zimmer's defense - led by Linval Joseph, Everson Griffen, Eric Kendricks and Trae Waynes, among others - is always a stout unit. The Vikings have two legitimate No. 1 wide receivers in Adam Thielen and Stefon Diggs. And through the first two games of the 2019 season, Cook has already rushed for 265 yards.

The problem for the Vikings is that if they're one piece away from being a legitimate Super Bowl contender, well, it's the most important piece. Much was made of Cousins throwing the ball just 10 times in the team's Week 1 win over the Atlanta Falcons, but when he got the chance to throw the ball 32 times Sunday, he gifted the Packers two interceptions and posted a quarterback ranking of just 4.0.

For the Vikings, being a quarterback away from a potential Lombardi Trophy may go down to be the story of the Zimmer era. The Vikings gave Cousins a fully-guaranteed three-year, $84 million deal before the 2018 season hoping to solve that problem. Thus far, it's only served to make it more obvious. 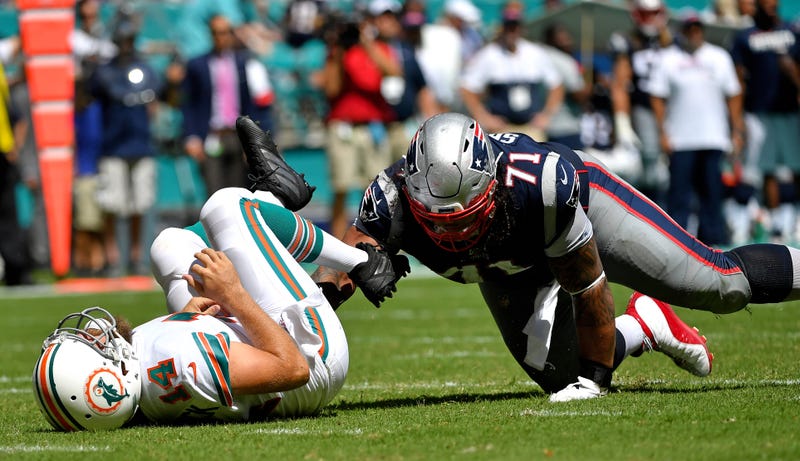 Ryan Fitzpatrick and the Dolphins are off to an ugly 0-2 start. Photo credit (Steve Mitchell/USA Today Images)

3. It's Hard To Ignore The Incompetence Of The Dolphins

As someone that watched every Sixers game during "The Process," I feel qualified to say this: The 2019 Miami Dolphins have a chance to go down as one of the worst teams in sports history. It doesn't feel like a stretch after being outscored 102-10 in their first two games to say that the Dolphins could go 0-16. And should it happen, their 0-16 could be even worse than when the 2008 Detroit Lions and 2017 Cleveland Browns went winless.

It is first worth pointing out that the Dolphins have played two teams - the Baltimore Ravens and New England Patriots - that have jumped out to impressive 2-0 starts in 2019. Sunday, the one percent got richer, as Tom Brady connected with four-time All-Pro wide receiver Antonio Brown four times for 56 yards and a touchdown. The Patriots have checked in at No. 1 on the RADIO.COM NFL Power Rankings three weeks running for a reason.

But it wasn't like the Patriots offense was that great Sunday. Josh McDaniels' offense, as they almost always are, were very good. But Tom Brady threw for 264 yards, Sony Michel led the Patriots with 85 rushing yards and Brown's 56 receiving yards were the most on the team. Those numbers certainly don't scream 43-0 win.

But in addition to their offense output, the Patriots picked off the Dolphins four times, including picks-sixes from both Jamie Collins Sr. and Stephen Gilmore where they ran untouched into the endzone:

To make matters worse, Josh Rosen, who the Dolphins traded a second round pick for during the 2019 NFL Draft, came on and completed just seven of 18 pass attempts, while throwing an interception of his own on top of the three that Fitzpatrick threw. In the Dolphins first two games, Rosen has taken 21 snaps, and already thrown two interceptions. Why exactly the organization traded for him knowing it was attempting to bottom out to be in a position to draft Alabama quarterback Tua Tagovailoa or another top quarterbacking prospect is unclear.

The Dolphins are this bad with their current roster. Imagine if someone meets their asking price for safety Minkah Fitzpatrick or they are able to facilitate a deal to move running back Kenyan Drake.

Coming into 2019, it felt hard to imagine that a team could be noticeably worse than the two teams in NFL history to go 0-16. It appears that the 2019 Dolphins are intent on testing that theory.