Four years after winning the NFL MVP, being named an All-Pro and leading the Carolina Panthers to a Super Bowl appearance, Cam Newton faces an uncertain future with the team that made him the No. 1 overall pick in the 2011 NFL Draft.

Newton hasn’t played since Week 2, as he’s recovering from a mid-foot sprain that he initially suffered in preseason, the latest of a slew of injuries that the 30-year-old has suffered in his NFL career.

In Newton’s absence, second-year pro Kyle Allen has helped the Panthers to win four consecutive games. Make no mistake, NFL MVP candidate Christian McCaffrey has been the leading reason for the Panthers success in Newton’s absence. But despite working through a fumbling problem, Allen has thrown nine touchdowns and zero interceptions in four starts. Newton’s upside remains higher, though it’s fair to wonder exactly what Newton’s upside is physically at this stage of his career.

Further complicating matters is that the Panthers could release Newton this offseason and only inherit $2 million in dead cap money. If Newton is on the Panthers roster in 2020, he’ll cost $21.1 million against the salary cap. Though it’s perhaps shortsighted, there’s certainly a case to be made that the 2020 Panthers would be a better team with Allen under center and an additional $19.1 million to spend to build a team, even if Newton is a better quarterback.

Prior to the Panthers victory over the Tampa Bay Buccaneers in Week 6, Ian Rapoport of NFL Network wrote that as long as the Panthers continue to win, it’s not a lock that Newton will reassume his starting job when he’s healthy. That could ultimately mean the Panthers look to trade Newton this offseason. While simply releasing him could also become a consideration, Mike Freeman of Bleacher Report spoke to an AFC executive that estimated as much as a third of the league would show interest in Newton if he was made available.

Here’s a look at a few potential suitors for Newton, should the opportunity to acquire him present itself: 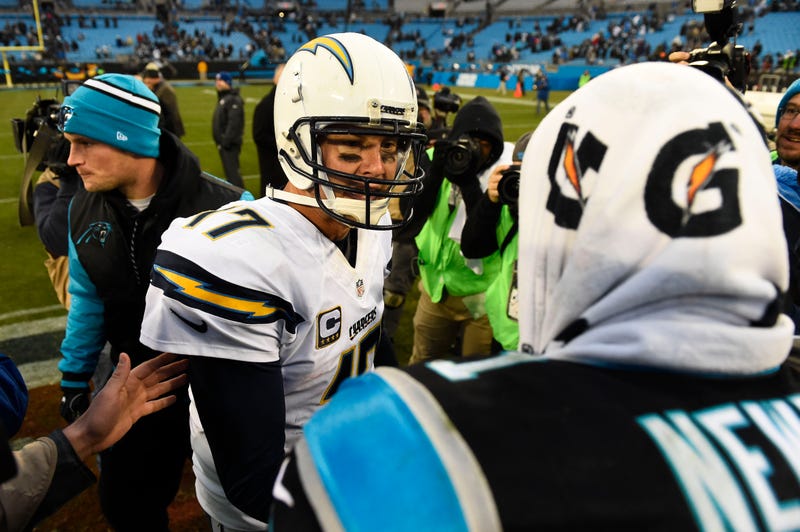 Los Angeles Chargers - After going 12-4 and winning a playoff game in 2018, the Chargers have been perhaps the most disappointing team in the NFL this season. After losing to the undermanned Pittsburgh Steelers on Sunday Night Football, the Chargers are 2-4 and face a pretty difficult path to returning to postseason contention. Perhaps more concerning from a long-term perspective is that the Chargers, who left San Diego after the 2016 season, appear to have generated next-to-no fan interest in Los Angeles. That lack of fan interest, though, may allow them to move on from 37-year-old franchise icon Philip Rivers (who has six interceptions and four fumbles in 2019) without a ton of kicking and screaming, should they determine that’s their best path moving forward. As Mike Florio of Pro Football Talk noted, the Chargers are moving into SoFi Stadium at Hollywood Park in 2020, and someone with the brand of Newton could help them to begin to build a fanbase. 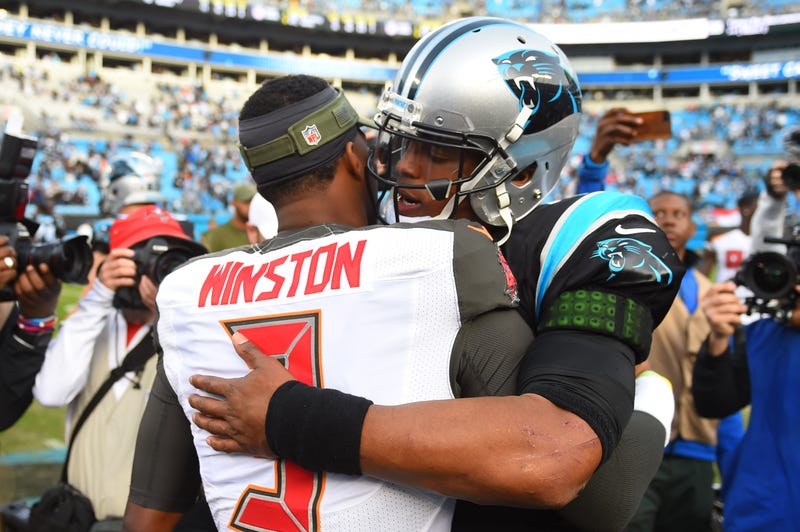 Tampa Bay Buccaneers - While Jameis Winston tossed nine touchdowns to just two interceptions between Week 2 and Week 5, sandwiched around those four games are two very ugly performances. Winston was picked off three times in a 31-17 loss to the San Francisco 49ers in Week 1. Then, this past weekend, he threw five interceptions in a 37-26 loss to the Carolina Panthers in London. Between Mike Evans and Chris Godwin, the Buccaneers have an attractive group of pass catchers. It feels like time is running out for Winston, a former No. 1 overall pick, whose rookie contract concludes at the end of this year. If released, the Buccaneers could appeal to Newton. Beyond getting to face the Panthers twice every year, he’s from Atlanta, and Tampa Bay, at least in a relative sense, would allow him to stay within the vicinity of where he’s from. 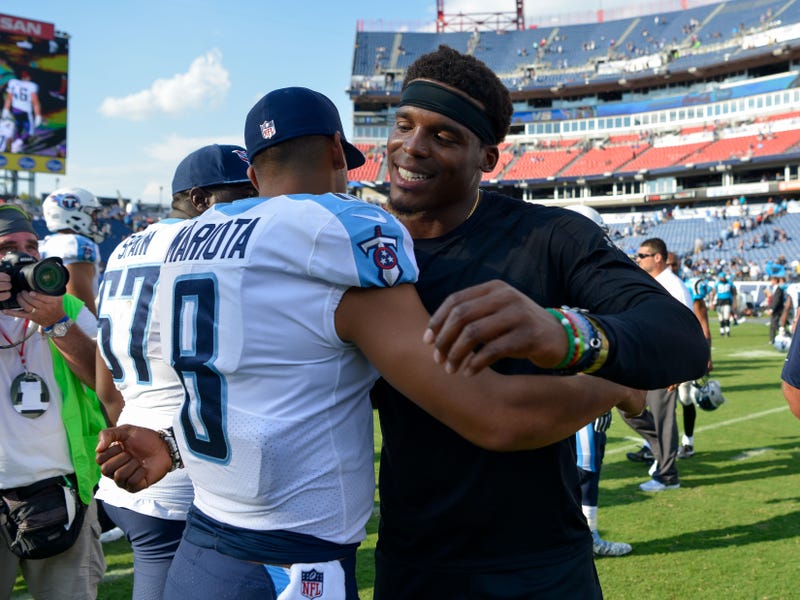 Tennessee Titans - Marcus Mariota was taken a pick behind Jameis Winston in the 2015 NFL Draft. The former Heisman Trophy winner didn’t throw five interceptions over the weekend, but he was benched in favor of Ryan Tannehill. Titans head coach Mike Vrabel has yet to announce who will start in Week 7, but Ian Rapoport of NFL Network described Mariota’s future with the team as being “very much in doubt,” as he, like Winston, will see his rookie deal expire after the year. When compared to other options, Nashville would have relative proximity both to Newton’s hometown and to Auburn, where he starred in college. 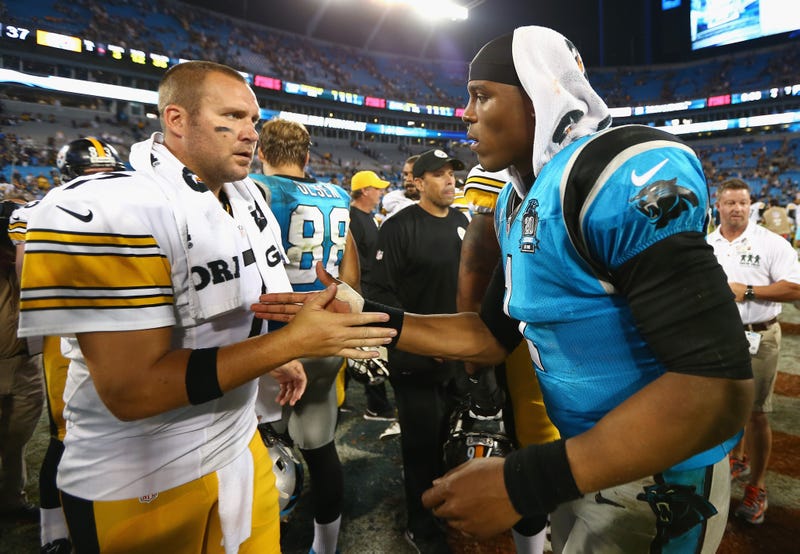 Ben Roethlisberger (left) is unlikely to retire, but if he did, Cam Newton (right) could be an interesting potential replacement. Photo credit (Streeter Lecka/Getty Images)

Pittsburgh Steelers/New England Patriots - These are both long shots, but worth mentioning together. Ben Roethlisberger had season-ending surgery to repair a UCL injury, but has said he plans to return for a 17th season. Still, at 37, it’s not impossible he has a change of heart. While the Steelers could consider handing the keys to Mason Rudolph in the unlikely event that Roethlisberger retires, the Patriots don’t appear to have any sort of succession plan for if Tom Brady retires. And at 42, and without a guaranteed contract for 2020, Brady walking away after 2019 seems to be a more realistic possibility. It’s unclear if Bill Belichick and company would have interest in Newton, but he would certainly have interest in a second act under the greatest coach in the history of the sport.