It's been far from a quiet preseason for the Cleveland Browns, who, if not for Antonio Brown and Andrew Luck have been the most heavily-discussed topic in NFL circles this summer.

But, uncharacteristically, Odell Beckham Jr., save for one GQ story, has been rather inconspicuous for much of his first summer in Cleveland. There's some thought that without the spotlight of New York on Beckham Jr. - and Baker Mayfield, another polarizing figure, able to deflect quite a bit of the spotlight in Cleveland - he could have the finest season of his NFL career.

Count Mayfield - a former Heisman Trophy winner and No. 1 overall pick - among those excited for what Beckham Jr. can do in his sixth NFL season.

"I think he’s such a real-life superstar that people do forget that he’s truly one of the greatest athletes in the world and how good he is at playing receiver and the game of football," Mayfield told Zach Frydenlund of Complex. "I think he’s eager to get back out there and handle it on the field and just be himself again." 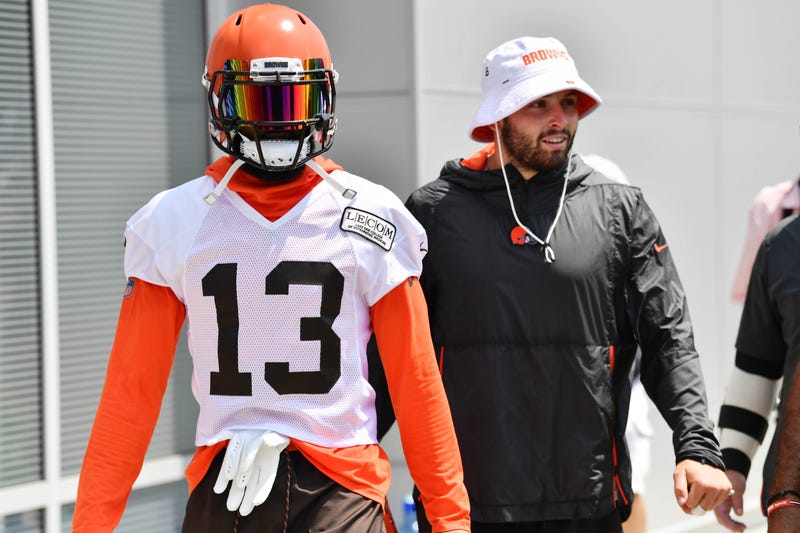 Mayfield, who threw for 3,725 yards in his rookie season of 2018, will add Beckham Jr. to a group of pass catchers that already included his former LSU teammate Jarvis Landry and tight end David Njouku. Running back Nick Chubb average 5.2 yard-per-carry in his rookie season, and he'll be joined in the second-half of the season by Kareem Hunt after he serves his eight-game suspension.

Certainly, Beckham Jr.'s shine, as Mayfield says, extends past football. But the reason he was ever given a platform to become friends with Drake and LeBron James is because he's a damn good wide receiver.

But is has been a little while since Beckham consistently showed his Hall of Fame caliber talent. Part of that is because the Giants teams around him were a mess the past two years. He also has been limited to just 16 of a possible 32 games the last two seasons. However, through his first three NFL seasons, Beckham averaged 96 catches and 1,374 receiving yards per season. He was right in the discussion with Julio Jones and Antonio Brown for best wide receiver in the NFL between 2014 and 2016.

Still just 26, Beckham is part of a Browns team that may be the most talented roster he's ever been a part of. Perhaps that's why, as much as he can, it feels like he has faded into the background. Don't expect him to stay in the background when the season actually starts, though.