Brett Favre never played on the same team as six-time All-Pro linebacker Junior Seau, but his tragic death left an impact on the legendary quarterback.

Thursday, Favre celebrated his 50th birthday. Beyond the sadness he felt for Seau and his family, the linebacker’s death made him wonder what the future holds for him.

“I knew Junior Seau very, very well,” Favre said on The Peter King Podcast. “I wouldn’t say we were close friends, but I knew him very well, played against him a ton. That guy loved life. I thought he would play forever. The last person I would ever think would kill themselves is Junior Seau. There’s no way. He had too much energy. This is a strange way of explaining it or describing it, but it’s like when Joe Montana was traded to the Kansas City Chiefs, [it reminded the NFL world that] anything can happen. And, I love life. I love everything about it. I have good days and bad days, but I love everything about it. I don’t want to leave this place. I know at some point I will. But if he [Seau] can do that, what about me?” 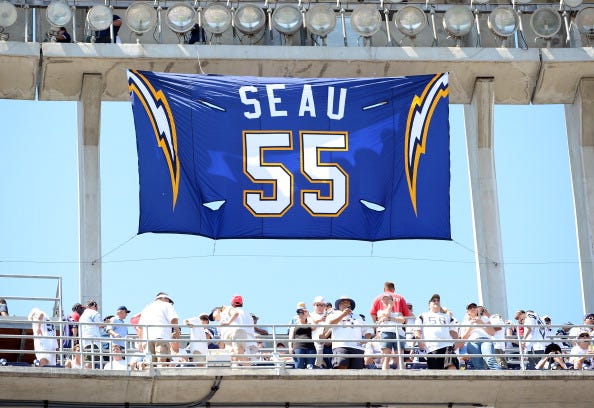 Seau retired following the 2009 season while a member of the New England Patriots — where he spent his final four years, including 2007 as a member of the only NFL team to go 16-0 in the regular season. He was 40 years old when he retired, less than three years later, he took his own life.

Seau shot himself in the chest on May 2, 2012, a few years before he would be inducted into the Pro Football Hall of Fame. By shooting himself in the chest, he preserved his brain, allowing it to be studied after his life. A study later showed that he had “chronic brain damage.”

In a previously released snippet, Favre, who, like Seau, played 20 seasons (albeit at a different position), admitted that he’s dealt with some memory loss and has concerns about how his brain will age.

"But as we're learning about concussions," he continued, "there's a term that is often used in football, and maybe in other sports, that I got 'dinged.' ... When you have ringing of the ears, seeing stars, that's a concussion. And if that is a concussion, then I've had hundreds, probably thousands, throughout my career, which is frightening."