(SportsRadio 610) -- Texans chairman and CEO Cal McNair reinforced a claim by Bill O'Brien that the team could not afford to keep wide receiver DeAndre Hopkins this past offseason.

McNair spoke publicly Wednesday for the first time since firing O'Brien as the head coach and general manager earlier in the week.

The most polarizing move O'Brien made in his time doubling up as coach and GM was the decision to trade Hopkins, which was backed by McNair and involved now interim general manager Jack Easterby.

McNair defended the decision Wednesday, saying it was too cost prohibitive to keep Hopkins with contract extensions to left tackle Laremy Tunsil and quarterback Deshaun Watson.

"We would've loved to have Hopkins on our team but when you have a franchise left tackle, which we re-did his contract, which by the way, he's playing at a top five level right now," McNair said on SportsRadio 610. "The franchise left tackle is a huge piece of the puzzle. We have a franchise quarterback which is what we've been looking for, for years, and what every team is looking for and trying to get. And we have them. And we have a very firm belief that Deshaun Watson is our guy. So we had those two major contracts. As you look across the league, we are paying more than anyone and it's not really very close on our roster.

Hopkins had three years, $40 million left on his contract, but none of the money was guaranteed.

All parties involved agree Hopkins had long outperformed his contract, though it's debatable whether that means it was imperative either give him a raise or a trade.

Hopkins was traded to the Arizona Cardinals for running back David Johnson, a second round pick the Texans used on defensive lineman Ross Blacklock, and a future fourth-round swap. He signed an extension with the Cardinals worth $42.75 million guaranteed.

Hopkins responded to a tweet by SportsRadio 610 saying he never asked for a new deal, rather "a little raise" and added he's happy in Arizona. 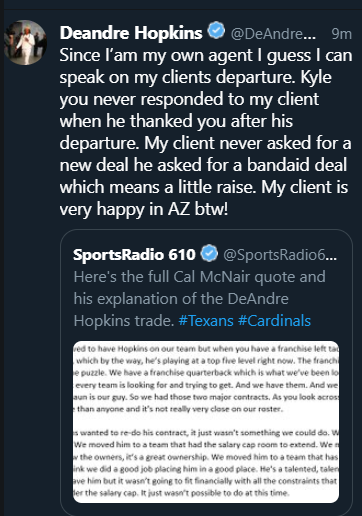 Tunsil, for whom the Texans traded two first-round picks, signed a three-year, $66 million with $50 million guaranteed.

Watson signed a four-year extension worth up to $156 million with $110 million in guarantees.

The Texans have the highest payroll in the NFL this season spending over $248 million.