There are certainly some shaky NFL depth charts at the quarterback position following recent (or not-so-recent) injuries that effectively put the planned starter on the sidelines for the remainder of the season.

The Cowboys, who have immense talent on the offensive side of the football outside of the quarterback position, have been rolling with Andy Dalton and Ben DiNucci since Dak Prescott's gruesome Week 5 injury. Sam Darnold's shoulder has kept him out of games and/or from playing effectively when active, and his 0-6 record combines with Joe Flacco's 0-4 as the Jets continue to look good in the Trevor Lawrence sweepstakes. Drew Brees injured his ribs and is dealing with a collapsed lung as Taysom Hill and Jameis Winston have taken over in relief. Teddy Bridgewater's injury gave way to P.J. Walker, who actually got a win over Matthew Stafford and the hapless Lions. The 49ers have a big problem at the quarterback position, regardless of whether or not Jimmy Garoppolo is healthy (which he currently isn't). Gardner Minshew and Jake Luton haven't brought much success to Jacksonville as they vie for a new rookie signal-caller in 2021. Nick Foles suffered a lower-body injury in Week 10 which, compounded with Mitch Trubisky's shoulder injury, leaves the Bears' quarterback situation in limbo. It's not like either of them have been particularly good, either.

And in Week 11, one of the most crushing blows of all was dealt to Bengals quarterback Joe Burrow, the promising rookie and first overall draft pick whose 2020 season — and possibly 2021 season — is over. 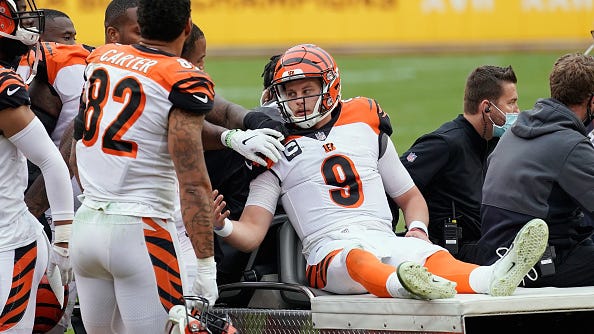 Joe Burrow's 2021 season could also be in jeopardy: report

And though it wouldn't necessarily make sense for some teams, like the Jets, to want to add a quarterback that provides the franchise with some success for the remainder of the 2020 season, it definitely makes sense for others to look at another option. Even the Philadelphia Eagles, who are sticking by Carson Wentz for whatever reason and don't seem willing to utilize 2020 second-round pick Jalen Hurts as a legitimate backup, should probably be interested in poking around to see who they could sign as another backup option while the division is still barely theirs.

Though Kaepernick has been a revolutionary figure in the league's social justice movement following several incidents of police brutality and racial violence prior to the 2020 season, his only return to the NFL field has been a virtual one in Madden.

Mike Florio of Pro Football Talk thinks that if Kaepernick doesn't get a call from Cincinnati or any other QB-needy teams now, it will act as more "blatant" evidence of the "already-obvious strategy to ultimately avoid Kaepernick."

"Kaepernick’s relationship with the NFL has been relegated to the dustbin of history," Florio wrote. "And history, frankly, will not look kindly on those who kept Kaepernick out of the NFL (they know who they are), and those who aided and abetted the process (they know who they are, too) by spreading false narratives aimed at justifying the failure and refusal to ever entertain offering him a job."

Another social media movement involving Colin Kaepernick arose recently, with several prominent figures putting him in contrast with Kenosha shooter Kyle Rittenhouse and calling for the former's escalation as a hero and the latter's condemnation.

I want to live in a country where Colin Kaepernick is seen as a hero and Kyle Rittenhouse is seen as a terrorist.

I want to live in a country where Colin Kaepernick is seen as a hero and Kyle Rittenhouse is seen as a terrorist. https://t.co/2hSX0Nz2lR

I want to live in a country where Colin Kaepernick is seen as a hero and Kyle Rittenhouse is seen as a terrorist. https://t.co/dbrXh90mpk