Week 8 featured some spectacular plays. In one, Deshaun Watson found time in the backfield, evaded pressure, and got kicked in the eye before firing a touchdown pass. In another, Kirk Cousins dropped an absolute dime to Adam Thielen, who made a fully extended grab in the endzone and injured his hamstring in the process. See the theme here? Injuries happen on good plays, too. But will they mean anything in these players’ availability or fantasy relevance going forward? Find out below.

Fantasy Impact: Deshaun Watson avoided serious injury when he got kicked in the eye and simultaneously made one of the best throws we’ve seen all season. Fuller is out again, but Hopkins and Stills practiced in full this week, meaning Watson will have a good amount of weapons as usual. Westbrook is questionable, but isn’t a viable fantasy option anymore after being passed by DJ Chark and Chris Conley on the depth chart.

Fantasy Impact: If Jackson plays, the Eagles offense is a completely different animal. We’ve seen them struggle to create much space, and Jackson is really the only deep threat on the roster. His addition will be a massive plus to the roster, and everyone will benefit from his return. He becomes immediately playable should he be ready.

Fantasy Impact: Adam Thielen, as mentioned earlier, made an absolutely tremendous grab in the endzone but came up noticeably hobbled. He has said he’s optimistic about his chances to play, but his situation should be monitored. This goes for Mahomes’s situation as well, though it would be pretty shocking of a dislocated kneecap only held Mahomes out for a week. If he doesn’t start, it becomes hard to start many of the Chiefs’ position players, including all of their wideouts.

Fantasy Impact: Hilton, much like DeSean Jackson, adds an entire element to the Colts’ offense that will be sorely missed against Pittsburgh. Without him, the offense will rely on a lot of short, underneath passes, so look for the tight ends in this one. With both Conner and Snell unavailable, Samuels is the lone running back to go in this one. Don’t expect him to explode while Rudolph is under center and the offense is struggling.

Fantasy Impact: Neither of the listed players are fantasy relevant players for the Jets, but they take away some of the more reliable options for Darnold. Overall, this is going to be an ugly game that the Dolphins could possibly win.

Fantasy Impact: The Redskins are in complete chaos as usual, with the biggest news coming from the disgruntled tackle Trent Williams. He ended his holdout, but won’t play in addition to the three names mentioned above. Dwayne Haskins makes his first start against a pretty scary Bills defense. It could get ugly in Buffalo.

Fantasy Impact: Delanie Walker is out again, meaning Jonnu Smith could have a strong week. He’s been a nice fill-in and is ranked highly by Pro Football Focus as a receiver. Cam Newton’s whole future is in question with recent news saying he’s very behind schedule and isn’t even close to practicing… yikes. Curtis Samuel should be good to go for Sunday afternoon.

Fantasy Impact: Jameis Winston is going to throw the ball a lot in this one, and Chris Godwin and Mike Evans should really be the two primary recipients. Howard being out doesn’t affect that gameplan at all.

Fantasy Impact: Aaron Rodgers has found a way to lead this team to victory over and over without Adams there, and a decision will be made right before game time according to Tom Silverstein. If he plays, he’s a must-start. 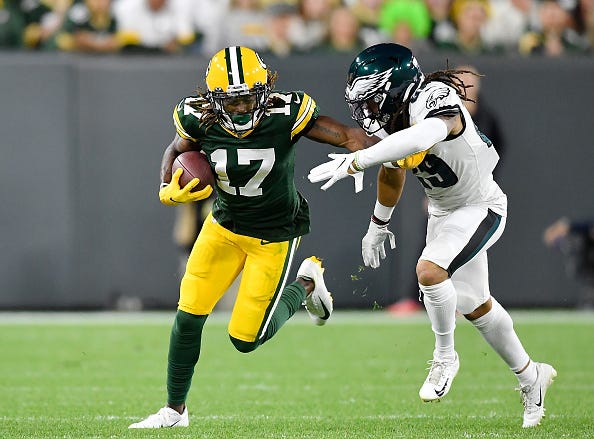 Fantasy Impact: Brandon Allen is the guy under center for the Broncos in what could be a low-scoring affair. Don’t get too excited about any Broncos this week, though Phillip Lindsay and Royce Freeman can both be started.

Fantasy Impact: Edelman should be able to go in this one, and N’Keal Harry was also activated off of IR after Josh Gordon was released. Burkhead shouldn’t be used for fantasy purposes regardless of his status. Marquise Brown has been questionable for a while now, but should be good to go for the Sunday night showdown.