A trio of game-time decisions will leave Eagles fans waiting in suspense as they have a potentially season-saving or season-ending matchup against the Seahawks on Sunday.

Here is a list of those, as well as other fantasy-relevant injuries around the NFL, and the implications that go along with them.

Fantasy Impact: Jeff Driskel has played well and hasn’t really hurt anyone’s fantasy value too much. The questions in this game come on the other side of the ball which looks to be a situation to avoid altogether. McLaurin is a good option to use at flex if he plays, but AP seems to have been put behind Derrius Guice in the depth chart, and Richardson doesn’t get enough targets or play for a good enough team to warrant any fantasy consideration.

Fantasy Impact: Thomas hasn’t been a massive impact player for the Jets, but he’s had at least some role in the offense. Even if he does go, though, he shouldn’t be on your fantasy radars.

Fantasy Impact: Engram can’t seem to get healthy, as he has now missed a huge chunk of games on the year, and this struggling Giants offense could really use his services. With Rhett Ellison sidelined as well, look for the WR trio of Golden Tate, Darius Slayton, and the returning Sterling Shepard to make the most impact through the air.

Fantasy Impact: Well this leaves everything up in the air, doesn’t it? If Howard can’t go, it makes Miles Sanders a must-play due to his dual-threat ability in the air and on the ground. It may be better for the Birds if Agholor misses, as he has been just plain bad this year. Jeffery’s availability means a lot for the team’s chances against Seattle. If neither of the WRs can go, Zach Ertz and Dallas Goedert, along with Sanders, are the best receiving options. 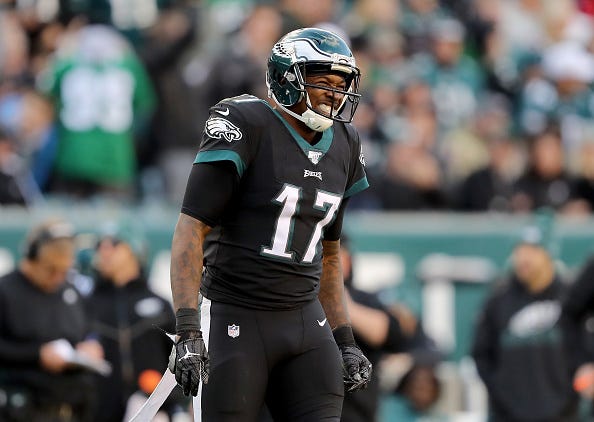 Fantasy Impact: The Brian Hill hype train pulled to a screeching halt after a tough outing against the Panthers, but he’ll have a chance to redeem himself again. Odds are that won’t happen against the Bucs, a team prone to shootouts through the air. Matt Ryan will have to lean on Julio Jones and Calvin Ridley once again in the receiving game.

Fantasy Impact: Sheesh. The Bengals actually have a chance to get their first win and pull Jeff Lanham off the roof of the Rocky Hog Tavern this week against a depleted Steelers offense. Benny Snell is back and should split the backfield work with Jaylen Samuels. Auden Tate looks to make a miraculous recovery from a really horrible-looking injury, and A.J. Green looks on from the sideline… again. Against such a good defense, Tate and the rest of the Bengals offense outside of Joe Mixon is pretty tough to start.

Fantasy Impact: We haven’t seen Walker in a while, and it probably will continue to be that way for another week as Jonnu Smith is once again the lead TE.

Fantasy Impact: If there wasn’t enough concern about the Patriots’ offense this season, have no fear. The chances that Brady misses are microscopic, but the receiving corps is much more up in the air. Stay tuned to see who will play and who won’t, but Dorsett isn’t someone that should be started in fantasy regardless.

Fantasy Impact: The Packers come into this one squeaky clean, while the 49ers are anything but on their offensive half. The first three on the list are all more likely than not to take the field, and the Niners will really benefit from having Kittle back. He’s a top-tier TE regardless of the fact that he’ll be coming off an extended absence from injury. Breida’s chances are much more bleak, so expect a good week from Tevin Coleman against a susceptible 49ers defense.